BACK TO ALL NEWS
Currently reading: New Citroen C4 and all-electric e-C4 go on sale in UK
UP NEXT
Lotus and Britishvolt to co-develop batteries for EV sports cars

Combustion-powered cars are available in four trim levels: Sense, Sense Plus, Shine and Shine Plus. Entry-level cars get LED headlights, 18in alloy wheels, a 10in touchscreen with smartphone compatibility and a comprehensive suite of driver aids as standard, while top-rung Shine Plus models - from £26,590 - bring extras including rear privacy glass, keyless entry, automatic headlights and front and rear parking sensors.

The ë-C4 tops the line-up, and is unavailable in entry-level Shine trim but matches the equipment offered on the petrol and diesel cars on the other trim levels.

Citroën says the model line, which comprises petrol and diesel powertrain options alongside the fully electric version, will “put compact hatchbacks back on the map” through an SUV influenced design and a focus on comfort.

The Ford Focus and Volkswagen Golf rival is slightly higher-riding than the C4 Cactus it effectively replaces, with the intention to bridge the gap between traditional hatchbacks and SUVs. It will be sold with petrol, diesel and electric powertrains, making it the first family hatchback in the portfolio of parent firm PSA Group to offer a zero-emissions variant.

Cobée said: “The car will be Citroën to its core, in design, innovation and comfort. So for us, it’s one of three or four bullets in the overall growth of Citroën. Citroën has massive legitimacy in this segment. It’s the one with the most populist customer base.” 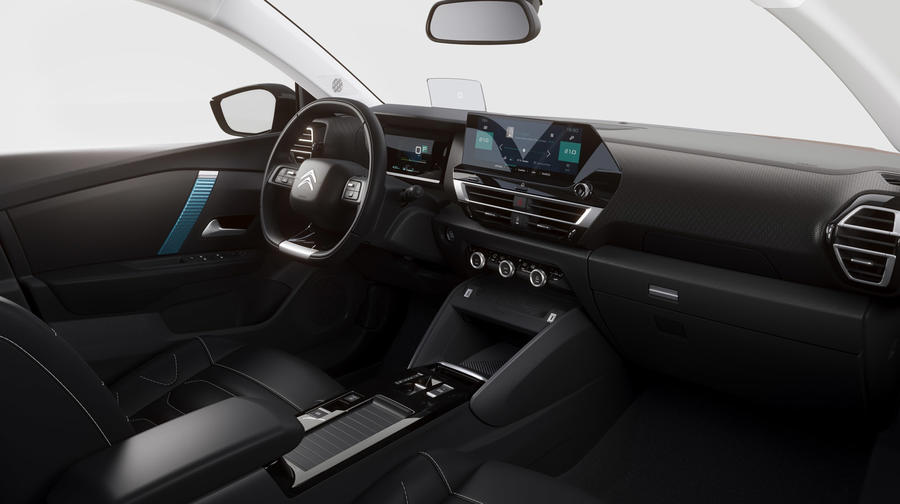 The front grille of the new C4 is based on the new design first seen in production on the new C3 recently, and features V-shaped 'signature' lights and chrome chevrons that stretch across the width of the vehicle. The bonnet features a concave shape reflecting the C5 Aircross SUV, and the front bumper is finished in a matte black effect that Citroën says adds protection in small impacts. The air intake grille features a chevron pattern seen on the recent Ami One and 19_19 concept cars.

The wheel arches feature the same matte black finish as the front bumper, and also add to the SUV styling. Citroën says the sloping roof is designed to emphasise the aerodynamics of the new C4, with the rear overhang design intended to reflect the Citroën GS.

Citroën says the C4’s 156mm ground clearance, combined with short front and rear overhangs, is designed to offer a higher vantage point and better all-round visibility than class rivals. While it is more conventional than the C4 Cactus several of the exterior customisation options offered for that car are available, including 31 different colour combinations.

Cobée said: “We probably were a bit carried away with our innovation capabilities on the [C4 Cactus].” He added that this new C4 is a “more comprehensive and attractive offer”.

Wheel sizes range from 16 to 18 inches, with the ë-C4 featuring an exclusive 18in Crosslite alloy wheel design. 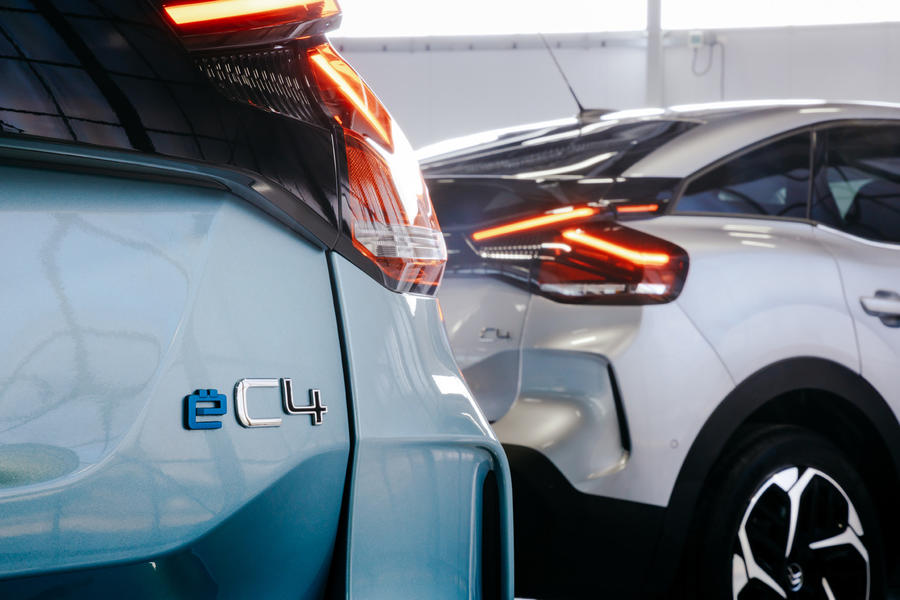 The C4 is built on the PSA Group’s CMP modular platform, which can accept both electric and conventional powertrains. The ë-C4 features a 134bhp, 192lb ft electric engine, which draws power from a 50kWh battery. Citroën claims a range of 217 miles, a 0-62mph time of 9.7sec and a top speed of 93mph.

The car also recovers energy when decelerating and braking, with three drive modes – Eco, Normal and Sport – that can alter the amount of engine power and the energy draw for the air conditioning to boost range.

The ë-C4 is fitted with an 11kW charger, which can complete a charge in around five hours on a 32-amp home wallbox, and a 100kW fast charger, which can achieve an 80% charge in 30 minutes on a public fast charger. Charging can be controlled via smartphone, with ë-C4 owners able to schedule it, for example to take advantage of off-peak electricity charge times.

The petrol-powered C4 is offered with a choice of three 1.2-litre three-cylinder turbo engines, ranging from the Puretech 100 to the Puretech 155. An eight-speed automatic gearbox is available on the most powerful petrols. There are also two four-cylinder diesels, the BlueHDi 110 and auto-only BlueHDi 130.

Full performance details of the petrol and diesel units that will be offered on the C4 have yet to be released. There is also no indication yet of whether the model will be offered in hybrid or plug-in hybrid form, although it is likely such powertrains will follow after launch. 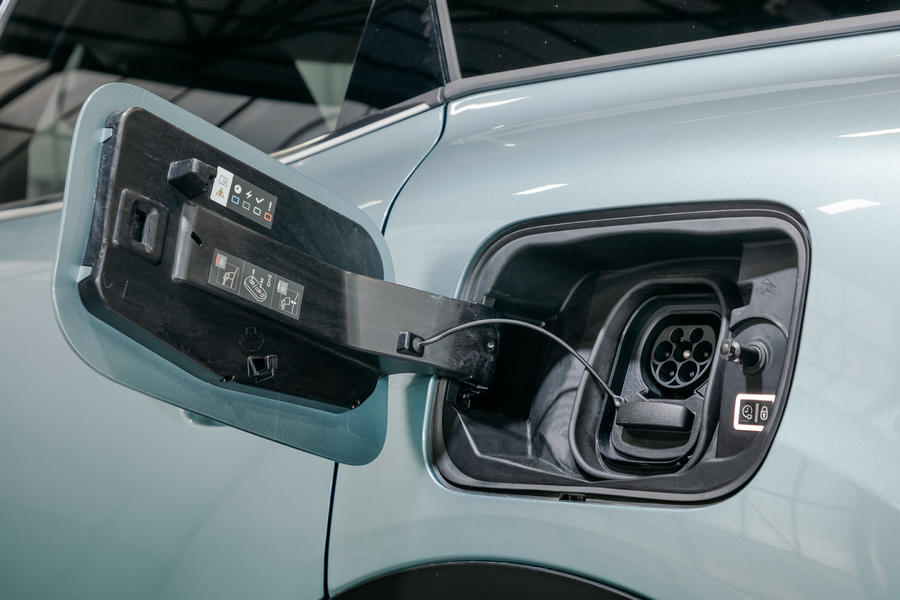 In line with Citroën’s focus on comfort, the C4 and ë-C4 are fitted as standard with the firm’s Progressive Hydraulic Cushion suspension, which uses two hydraulic stops to reduce bouncing and smooth the ride.

InsideThe ë-C4 and certain C4 models will be offered with Advanced Comfort seats, including optional heating and massaging systems. Six interior colour schemes, all aimed at making you feel “as if you are in your living room”, will be offered. Citroën also claims best-in-class rear knee room and a wide variety of storage compartments.

The dashboard includes a newly designed 10.0in infotainment touchscreen with a large coloured head-up display to complement the digital instrumentation. Unlike with recent models, Citroën has separated the climate control stack from the touchscreen with physical controls.

The infotainment features the latest version of Citroën’s navigation system and is compatible with Android Auto and Apple CarPlay. A full HD camera, which can take photos or video stored on a 16GB memory card, is built into the rear-view mirror. The C4 also offers 20 driver assistance features, including Highway Driving Assist and a level-two semi-autonomous system incorporating adaptive cruise control and lane keeping. 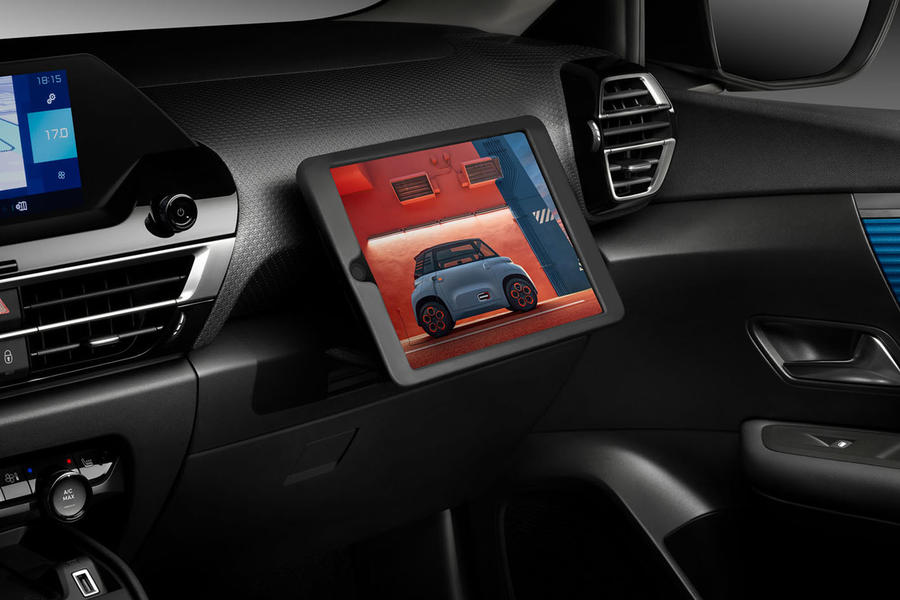 ..reminds me of my long departed Allegro! This, however, is not a compliment.

But, will it sell?

Yeah , I think it will, it's got the tech inside, the snazzy looks outside, and the prices aren't bad either.