BACK TO ALL NEWS
Currently reading: New 2021 Peugeot 308 shows off dramatic design overhaul
UP NEXT
Alfa Romeo to show new sports car in early 2023

New spy shots show the next-generation Peugeot 308 hatchback unwrapped ahead of its official unveiling in the coming weeks.

With its camouflage partly removed, the Peugeot 308 reveals a bold new front end design that brings it into line with its Peugeot 208, Peugeot 2008 and Peugeot 508 siblings, featuring the fang-style daytime running lights and narrow LED headlights. As promised, it is also wearing the brand's retro-inspired new emblem, revealed two weeks ago ahead of its first production appearance on the Ford Focus rival.

The 308 also swaps its protruding lower bumper for a rounded front end that incorporates Peugeot's new frameless grille. The roofline also appears to curve more steeply towards the rear than on the current car, which makes the hatchback appear longer and lower, while details including new wing mirrors, a subtle rear spoiler and a sharkfin-style aerial will round off the transformation.

Recently departed Peugeot boss Jean-Philippe Imparato previously hinted that the 308 will build on the bold look of all other recent Peugeots: “We put the design first,” he said when describing why the brand's comeback has been so successful. “On top of all the investment choices, I protected the design. Then the brand image recovers.” 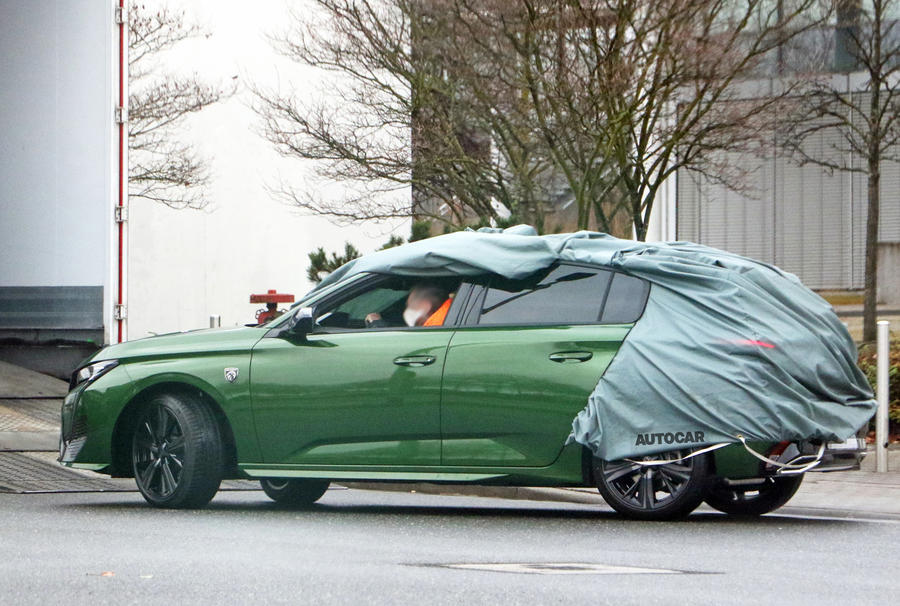 When it was launched in 2014, the current 308 kick-started the transformation of the entire Peugeot range with a more confident design approach. The successful, more daringly styled Peugeot 3008 followed, along with the 5008, 208 and 2008.

The next 308 is set to play that role again by laying the groundwork for a new era of Peugeots when it goes on sale in 2022, most likely after a public debut towards the end of 2021. It will be built on an updated version of the EMP2 platform that underpins more than a dozen PSA Group models and was originally introduced on today’s 308.

This model, developed by the brand’s new PSE performance arm that has developed the Peugeot 508 PSE, would gain an additional electric motor on the rear axle – a set-up already used on the 3008 PHEV – to give the 308 four-wheel drive and create a new 300bhp-plus hot hatch version that would also receive a host of sporty chassis and styling upgrades to challenge the likes of the Volkswagen Golf R.

The PSE badge is set to appear first on a range-topping performance version of the 508. Should the 508 PSE be a success, Imparato told Autocar the PSE formula could be applied “on the 3008 and other cars”, a comment that alludes to the desire to extend it to the 308.

Success won't be judged on sales, either, but instead on the reputation and acclaim the PSE models receive. To that end, the PSE project is as much about “transforming electric cars” and the perception of them, because Imparato sees “a big opportunity for a line-up of sporty cars” in this mould.

The GTi badge won't be used on the 308 or any other Peugeots apart from the 208. Even then, it might be limited to the UK only and be based on the electric version as part of the company’s plans to switch PSE's involvement in its models to electrified powertrains only.

However, a crossover version of the 308 is a strong possibility for Peugeot. It has noted the success of the Mercedes-Benz GLA, effectively a raised version of the Mercedes-A-Class hatchback. In addition, fellow PSA brand DS is planning both hatchback and crossover versions of its new DS 4 A-Class/GLA rival, which is due later this year with a shared body-in-white. There’s enough of a gap between the 308 and larger 3008 SUV to make such a car a reality. 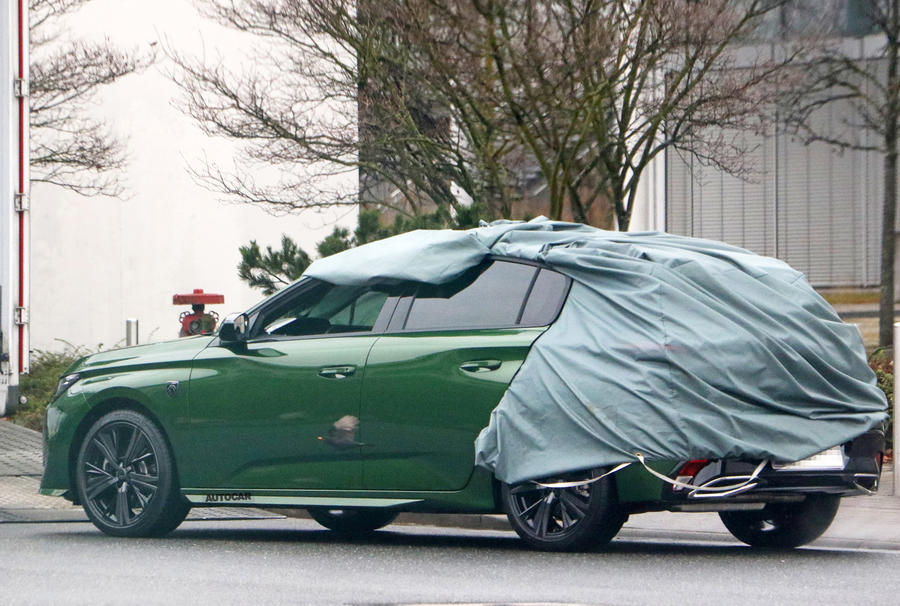 Updated petrol and diesel engines will continue to be offered alongside the plug-in hybrids. Peugeot is still committed to diesel and is even offering it in its new 208 and 2008 models at a time when many rivals are abandoning the fuel at this end of the market.

Something weird going on with the front wing.  It's not very photogenic.  Hope it's part of the disguise as it looks like it's been damaged.  Apart from that I'm liking the design of most of the recent pugs they are getting back on track.  Now the premium has become mundane people may look beyond the badge and see that other manufacturers have something to offer.

Why are cars getting so fugly? If this was a Chinese design ten years ago how we would have laughed

In any case all new Peugeots looks handsome..! :)

In some shots  seems that optical zoom distorts the perspective.., let's wait and see official and high quality photos ..!

In any case all new Peugeots looks handsome..! :)

The frogs really do struggle with designing nice cars don't they

Andrew1 8 March 2021
At least they have what to design, unlike the Brits who just comment.
Pietro Cavolonero 8 March 2021

Que? The world is full of British car designers, let's hope it wasn't one of them responsible for the current trend of fugliness.

Borderline racist but true, but then the Krauts aren't that far behind in fugliness (I'm thinking of you, BMW)