BACK TO ALL NEWS
Currently reading: New 2021 Hyundai Kona N officially revealed with 276bhp
UP NEXT
Ami, myself and I: Life with Citroen's 28mph urban EV

The Kona crossover has become the fifth Hyundai to gain an N-badged performance variant, after the i20, i30, i30 Fastback and Veloster hatchbacks – and arrives as the firm announces a plan to expand its N and N-Line range to 18 by the end of 2022.

While the i20 N takes on the Ford Fiesta ST in the hot supermini segment, the Kona N is aimed at the closely related Ford Puma ST performance crossover, which previously had no direct rivals.

However, the Kona N has more in common with the i30 N than the hot new i20, bringing a raft of “motorsport-inspired” features aimed at enhancing performance and improving the driving experience.

A turbocharged 2.0-litre four-cylinder petrol engine sends 276bhp and 289lb ft (figures roughly comparable to those of the Volkswagen Golf GTI Clubsport) to the front axle via Hyundai’s eight-speed dual-clutch automatic gearbox, the N DCT, which promises “better acceleration and a faster upshift”.

This gearbox offers three ‘high-performance’ modes that Hyundai says are “sure to bring a grin to the driver’s face”. The first, N Power Shift, is engaged when accelerator input exceeds 90%. It works to mitigate any loss of torque during upshifts to provide a smoother acceleration curve, accompanied by a backfire from the exhaust.

N Grin Shift provides a 20-second burst of maximum performance by instantly shifting down to the “most appropriate gear”. Hyundai says this mode (which can only be used every 40 seconds) will be especially useful on track and will help on the road with merging and overtaking. The final mode, N Track Sense Shift, is geared towards circuit driving, optimising gearchanges based on driver behaviour for quick lap times. 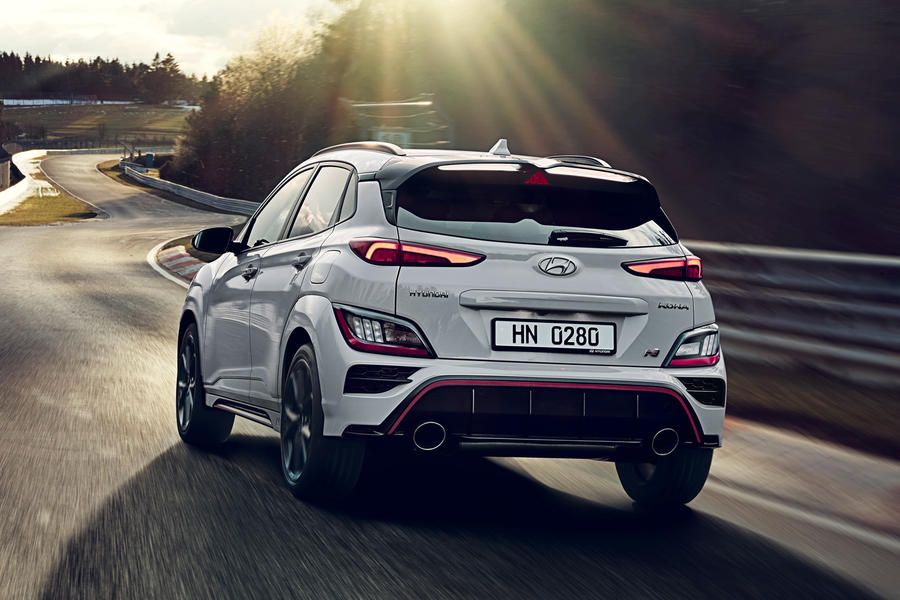 In terms of straight-line performance, the 1510kg Kona N can crack 0-62mph in 5.5sec when its launch control is engaged and reach 149mph.

Of particular note is the addition of an electronically controlled limited-slip differential (eLSD), which Hyundai calls the N Corner Carving Differential. By reducing understeer and wheelslip, it enables the driver to corner at higher speeds.

The electrically assisted steering is tuned for accuracy, directness and feedback, while the electronically adjustable suspension can be stiffened at the touch of a button.

The Kona N is marked out from standard Konas primarily by its prominent aero package, colour-coded bumpers and wide-track wheel designs. It’s available in an exclusive shade of Sonic Blue inspired by the N sub-brand’s trademark Performance Blue, which itself is used for accents throughout the interior.

The Kona’s infotainment system has been modified, too, with the 10.0in touchscreen and digital display giving a “game-like dimension to every driving experience” when the driver selects N or Sport mode.

Lap times, circuit maps and other important information are displayed in a familiar video game-style format, with buttons that can be set to the driver’s preferences. 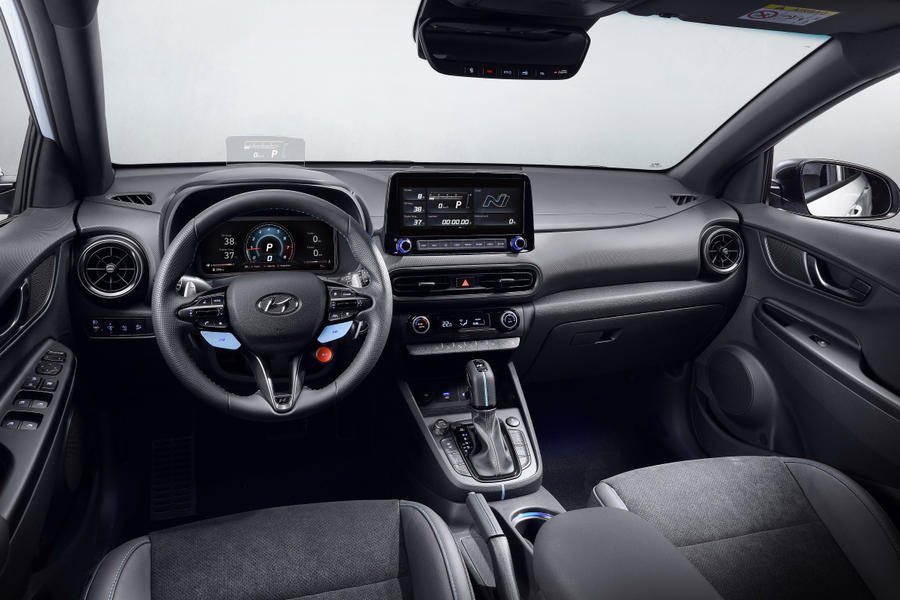 All Kona N models get launch control, the multimode gearbox and variable exhaust valves as standard, but UK specifications and pricing details have yet to be confirmed. A starting price in the region of £32,000 – slightly above that of the i30 Fastback N – is likely.

Hyundai says the expansion of the N sub-brand will bring full-bore and sports-inspired models “in each major vehicle segment”. No details have yet been given concerning the next addition to the range, but the new N slogan, “Never just drive”, has been cited as “the guiding principle of the future electrification of Hyundai N” by N brand vice-president Till Wartenberg, so hot versions of electric cars are on the cards.

The company cites its new Ioniq 5 crossover as a likely candidate, thanks to the “tremendous flexibility” of its new E-GMP architecture.

More certainly, Hyundai said the Kona N “previews a possible SUV line-up expansion”, suggesting that hot versions of the Tucson and Santa Fe are being considered.

Log in or register to post comments
superstevie 28 April 2021
@sl73 I predict the Fiesta will be top, followed by the i20N and the Polo GTi last.
si73 27 April 2021
@superstevie, totally agree that the i20N is the more appealing, looking forward to a proper test of that, preferably a group test against the fiesta ST and Polo GTi etc.
Bimfan 27 April 2021

Looks pretty ugly in my view, I hope it is fast, because I prefer looking at the back to the front.