BACK TO ALL NEWS
Currently reading: First drive: 2021 Hyundai Ioniq 5 prototype review
UP NEXT
Why now is the time to buy a proper high-mileage hero

Is this electric concept car made real as fantastic to drive as it is to look at? We get our first indication from a top-spec prototype
Open gallery
Close

Who among the established car makers has, in recent times, changed the way the world perceived their marque with but one brilliantly conceived product?

There certainly aren’t many. Audi and the mid-engined Audi R8 supercar; maybe Fiat and the fine job it did reinventing the Fiat 500. Bentley’s Continental GT?

Well, here’s the latest member of that club. And one glance at the Hyundai Ioniq 5 will have you wondering whether this all-new electric crossover – an avant-garde but also staunchly traditional two-box hatchback with, of all things, Lancia Delta Integrale overtones – isn’t the most potent episode of perception-bending of them all.

We’ll come back to the design shortly, not least because all is not quite as it seems, but when was the last time a mass-market Hyundai stopped you dead in your tracks?

Design isn’t the only ambush that Hyundai has laid here, either: there’s also the timing. It was only on 23 February that the Ioniq 5 was revealed to the world, yet here we are in April with a pre-production example to become acquainted with on Warwickshire roads.

Get up very close and on this one you can even pick out patches where the disguise cladding fitted for public testing in Germany has worn through the shimmering metallic paint – although cars in mint condition should reach customers as early as late June. 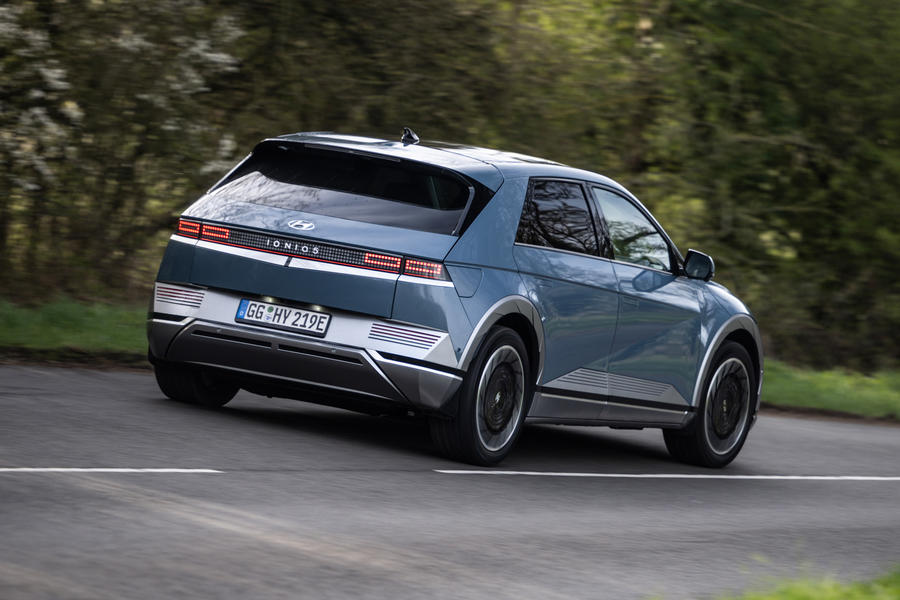 The Ioniq 5 has effectively been Hyundai’s lockdown project, and the short timeline means that some dynamic elements are still to be signed off before the first ‘proper’ cars go down the line at Ulsan, the South Korean plant so colossal that you need a helicopter to appreciate its scale. So no star rating today.

As for the idea itself, there’s an awful lot to digest. Hyundai Ioniq has since 2016 been the name of Hyundai’s Volkswagen Golf-sized liftback, famous for being the first car ever to be offered in hybrid, plug-in hybrid and electric formats. As it stands, that car won’t be replaced when its life cycle ends and Ioniq will become an EV sub-brand that’s more premium in nature and pricing than anything we’ve yet seen from Hyundai. Already an Ioniq 6 mid-size saloon is slated to launch in 2022, and an Ioniq 7 large SUV will follow in 2024.

All three of those will be built on Hyundai’s new E-GMP electric car platform, which brings super-fast 800V charging capability and is claimed to have the mass-market’s first integrated drive axle – meaning the driveshafts and wheel bearings are combined, to the benefit of ride comfort and handling stability.

As for competition, the Ioniq 5 is aimed squarely at Volkswagen’s ID 4, although Hyundai executives say the EV field is currently so incipient and dispersed that their car could end up stealing sales from everything from the Nissan Leaf to the Tesla Model S.

Back to the look of the thing. It’s misleading, because the Ioniq 5 is proportioned much like your typical hatch (the Giugiaro-style forward-leading C-pillar and angry clamshell snout hark back to the birth of the class) but is actually a much bigger beast than the Golf. At 4735mm, it’s closer to the BMW X3 SUV in length, and its three-metre wheelbase surpasses that of even the BMW X5.

Approach it and it’s this stature that hits you, even before the mad rifling on the wheel-arch cladding, the fabulously eight-bit LED matrix lights with their 256 cubic ‘pixels’ or the ‘Zorro’ slash that gives the car’s flanks an arresting origami-like quality, all of which are carried over from the 45 concept of the 2019 Frankfurt motor show. 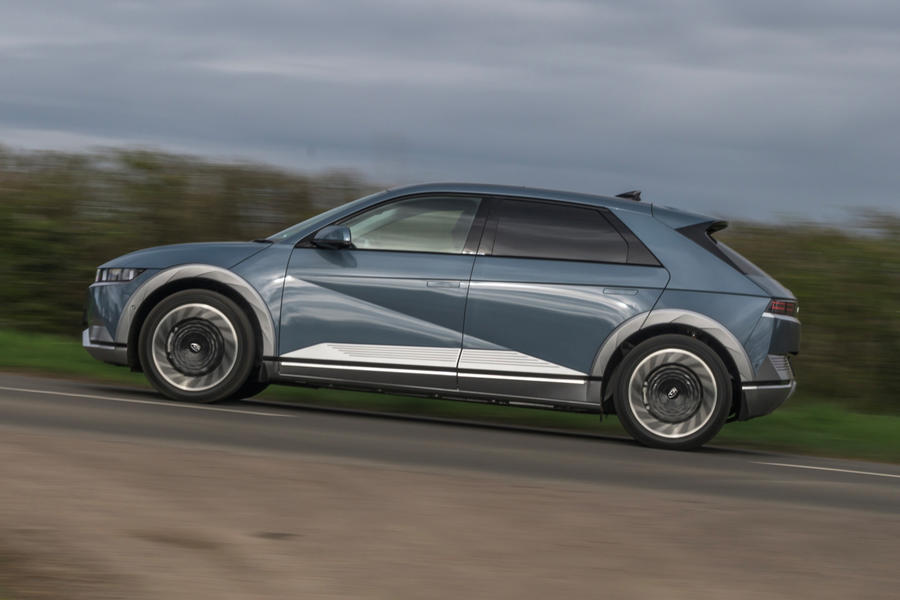 It goes on: there are flush door handles, the neat spoiler is actually a wing, with slots allowing air to flow through it, and the solar-panel roof is used to power the car’s ancillary electrical systems and can in certain circumstances charge the battery.

The Ioniq 5 has a combination of simplicity and detail that makes it hard to unhitch your gaze from its features, which is exactly the payback that Hyundai has earned from heavy investments in its design department. As far back as 2006, it hired Peter Schreyer (ex-Audi) to kick-start the brand’s transformation, and then, in 2015, Luc Donckerwolke (ex-Lamborghini, where he led the Diablo, Murciélago and Gallardo projects) joined the team. What you see is the result.

What lurks beneath is only a little less compelling. The Ioniq 5 will come in rear-wheel-drive and four-wheel-drive specifications and with two battery capacities. Our test car is in the top spec, with 302bhp from two motors (one per axle) and a 72.6kWh battery that should, once certified, yield an official range of around 255 miles. Performance is brisk, with the 5.2sec 0-62mph time putting the Ioniq 5 roughly on par with all-weather hot hatches such as the Golf R and Mercedes-AMG A35. If range is your priority, the RWD-only model should muster closer to 300 miles, although it won’t be quite so sprightly.

As for price, if any model in the line-up is to dip below £40,000, it will be the 58kWh version in RWD form, whose 168bhp will be enough to send it from 0-62mph in 8.5sec. All versions will have that 800V electrical system and therefore 350kW charging capability, which gives the Ioniq 5 potential to engorge around 60 miles of range for every five minutes it spends plugged in.

The driving experience isn’t quite what the punchy exterior suggests, in truth, but it’s convincing in a different way. The Ioniq 5 has an easygoing character, with light but accurate controls, lofty-set chairs and excellent visibility. An apex-hunting electric mega-hatch it certainly is not; but, given the family car brief, that shouldn’t come as a surprise. 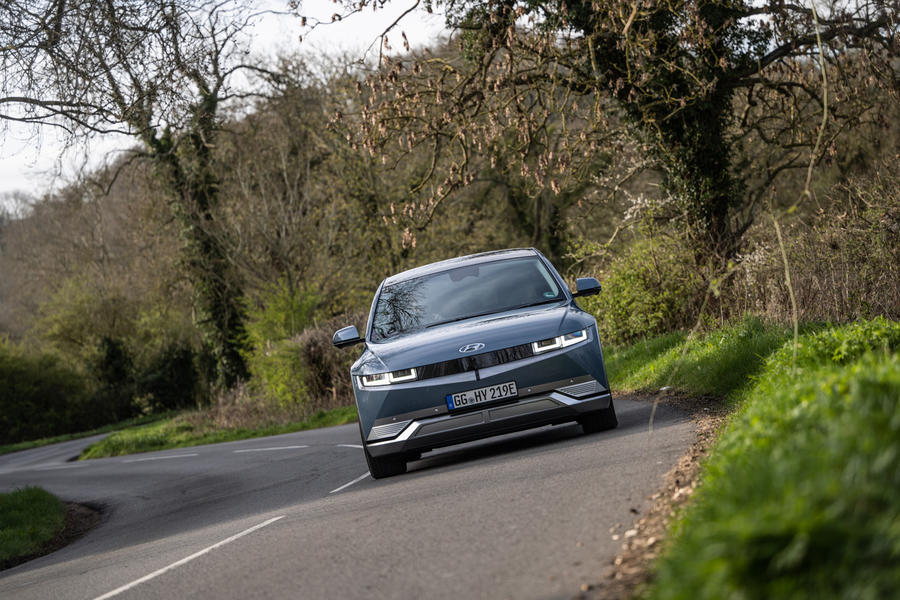 Perhaps Hyundai could tighten up the slight long-wave bounce in the (passive) suspension before the car is fully signed off but, in general, the ride quality is luxuriously detached for this price point.

And yet that broad nose, with its oversized Hyundai badge, is simple enough to guide along even small roads via the minimalistic two-spoke steering wheel. The Ioniq 5 seems to like motorways, too: it’s quiet on the move, despite the 20in wheels, and even a little restorative.

This softer personality type is echoed in the interior, many of the touchpoints in which are made from recycled or sustainable sourced materials and whose features are all about comfort and convenience. 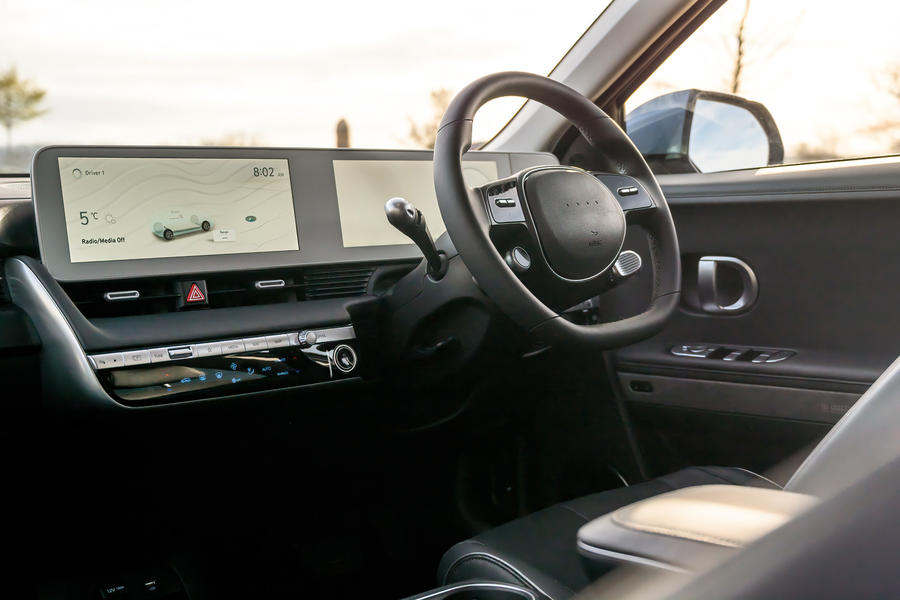 Gosh, it’s spacious in there, not only in the front, where the floor is flat across the width of the car, but also along the second row, which benefits from the slimmed-down front seats and can itself be slid 135mm fore and aft electrically.

Those front seats also have deployable calf-rests that you would normally expect to find in the back of a Mercedes-Benz S-Class and a heavily reclined ‘Relaxion’ preset. This is in general an impressively pleasant space to sit within, and while dual 12.3in displays dominate the dashboard, there’s also still a good level of physical switchgear. Some of the haptic-feedback buttons aren’t so successful, though.

Of course, with 446lb ft of torque on tap, you can get a rude turn of abrupt pace if you want it, particularly in Sport driving mode, the button for which hangs from the steering wheel, on the opposite side to the rather phallic gear selector.

On its SUV-specific Michelin Pilot Sport 4 rubber, this chassis also grips doggedly, and the tyres and motors can easily combine to fire the Ioniq 5 along roads at a rate that exceeds the suspension’s comfort zone.

Still, for a supersized hatchback, this car is nicely balanced, and its perceptibly rear-biased powertrain bodes well for the low-slung coupé, built on this same platform, that Hyundai is now considering. 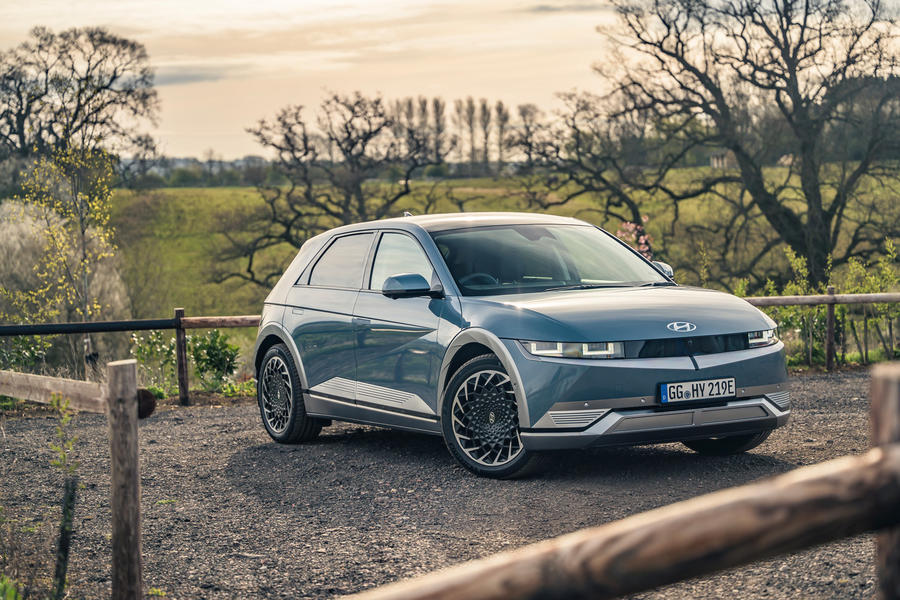 Ninety minutes in an incomplete version of what could prove one of the most significant cars of the decade was never going to be enough.

What’s nevertheless clear is that thoughtful ergonomics, good range and performance, and an easy drivability will stand the Ioniq 5 in good stead. What should worry rivals is that this car also possesses in abundance the one quality so many other electric cars lack: personality.

It's looks great but the most significant thing is 60 miles charge in 5 minutes. Or 300 in 25 minutes. That's the sort of stuff that makes everything out there out of date. That's a real breakthrough. I quite like the idea of a mega hatch that can recharge in 25 minutes.

michael knight 26 April 2021
It looks Huge! sneaky initial shots placed it so the scale was impossible to see. Now on the road it's a beast.
View all comments (15)