Orders open tomorrow for the all-new, hybrid-only Honda HR-V crossover ahead of its market launch in late 2021.

The Nissan Juke rival will use a variation of the petrol-electric powertrain from the smaller Honda Jazz supermini, with which it also shares its 'Global Small Car' platform. A 1.5-litre Atkinson cycle four-cylinder petrol engine is mated to a pair of electric motors for a combined 129bhp and 187lb ft - slightly more than the Jazz, likely because of the HR-V's increased size.

The electric motors, housed alongside the petrol engine under the bonnet to maximise interior space, are responsible for the bulk of the propulsion, with the engine serving as a generator. At "higher, more constant speeds", the petrol engine takes over automatically, but the powertrain can be operated in three different drive modes - Eco, Normal and Sport - for varying levels of electric-combustion input.

The third-gen HR-V's design is a dramatic departure from that of its predecessor. Despite closely matching the dimensions of its predecessor, overhauled proportions and an emphasis on space efficiency (the HVAC system is as compact as possible, and the EV battery pack is mounted under the boot floor, for example) have raised rear legroom by 35mm and boosted boot space. Ride height is also up by 10mm, while the roofline has been lowered by 20mm.

Four adults can be accommodated in "maximum comfort", according to Honda. 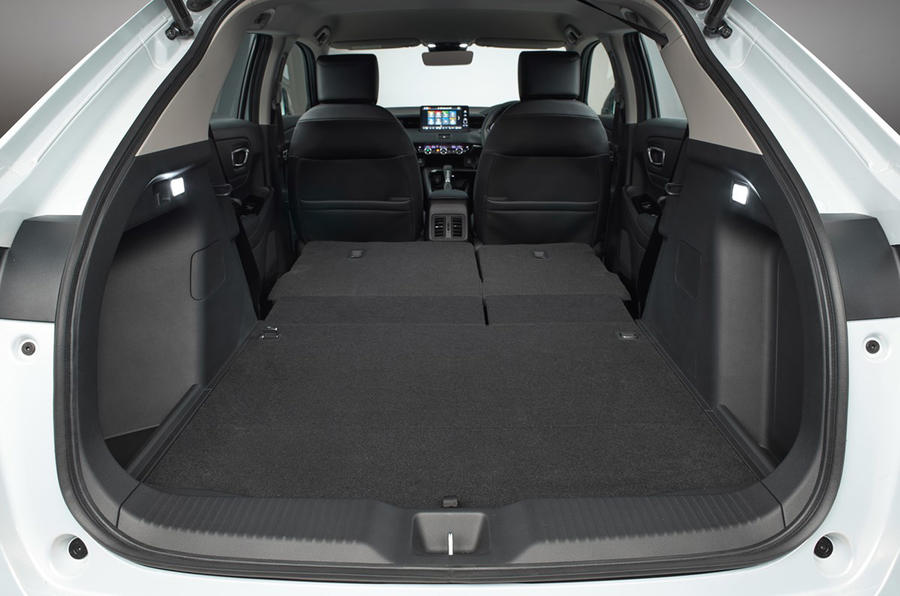 Former crossover hatchback pioneer makes a comeback bid - but is success within the HR-V's grasp, and does it do enough dynamically to stand out?

The cabin has been redesigned to maximise the feeling of spaciousness, with a minimalist dashboard layout, simple horizontally aligned instrument panel and Honda's 'Magic' folding, flipping rear seats in the back. The dashboard is a revised design, incorporating a 9.0in infotainment touchscreen and 7.0in TFT display within the gauge cluster, and new L-shaped vents in the top corners of the dashboard to free up space.

The firm also says the new vents offer improved comfort by directing airflow along the side windows, rather than directly onto the occupants. Also new for the third-gen HR-V is an air diffusion system that sends a "curtain" of fresh air through new L-shaped vents.

Log in or register to post comments
Commenter 5 August 2021
SHaring platform with much smaller supermini hatchback seems to be the norm to save and maximize price, as direct competitors Taigo and Arkana are already doing.
LP in Brighton 29 July 2021
It's a bit naughty of Honda to claim a total system output power of 129 horsepower without revealing a figure for the combustion engine alone (which is likely to be in the region of 100-110 horsepower). The combined output represents peak power available for short durations which will drop quickly when climbing a long incline or when cruising at high speed. Also, low speed acceleration is solely dependent on the electric motor - the power of which is not stated (but it's likely to be less than the combined figure quoted).
It's true that Honda's hybrid system works well in normal use, delivering sprightly performance with impressive efficiency, but it's important to understand the limitations when the going gets tough!
xxxx 29 July 2021