BACK TO ALL NEWS
Currently reading: Morgan 3 Wheeler: a year behind the wheel
UP NEXT
Rodin FZero: V10 weapon aims to be world's fastest car

Morgan’s reincarnated 3 Wheeler has paved the way for an alternative take on performance motoring. We look back at our year behind the wheel
Open gallery
Close

Only one car company in the entire automotive firmament would be crazy enough to put back into production a car with the same name, concept, mechanical layout and target customer as a model it first made in 1911 – and killed off more than six decades ago.

The company is, of course, the Morgan Motor Company of Pickersleigh Road, Malvern Link, and the car is the 3 Wheeler, a reincarnation of Morgan’s first-ever motor vehicle, one that was famed for its simplicity, agility, low price and the surprising power-to-weight ratio provided by its motorcycle-derived V-twin engine. Oddball it may have been, but effective it most certainly was, helping to build a rich motor sporting history that acquired for Morgan an early financial viability that it has never lost.

Morgan made no more air-cooled twin-cylinder 3 Wheelers after World War Two and pretty soon dropped the 3 Wheeler altogether. But the model’s reputation only seemed to grow, with the rise of vintage racing providing ever more opportunities for it consistently to beat far classier machinery and burnish the legend. Meanwhile, factions of the specialist car industry – Triking and others – began to demonstrate that there was still interest in cars of this layout, especially as agility, compactness and simplicity became rarities. When Morgan decided to put a new iteration of its classic back into production, complete with a modern steel tube chassis, a meaty 2.0-litre V-twin engine driving through a Mazda MX-5 gearbox, decent brakes and wishbone suspension to make a very traditional-looking package weighing just 500kg, our excitement was as great as anyone’s.

The styling was a particular achievement: big enough and convenient enough for modern occupants yet so close in character to the famous originals that some old-time owners made the decision to buy a new one, too.

At Autocar, we persuaded Morgan boss Steve Morris to let us specify our own 3 Wheeler, including modern convenience features such as heated seats, but avoiding expensive leather and paint options and finishes we thought might deteriorate with hard use. One good example was our choice of blackspoked wheels over the chromed versions we could have had. As you’ll read below, the 3 Wheeler divided opinions among our staff members, but nobody was ambivalent, which is just what Morgan had hoped for.

It’s our ‘Three Unwise Men’ Christmas feature. It’s late November. Cackett has a heated, fast Caterham. Saunders has a heated suit and a fast Ariel Nomad. I have neither in the unfast Morgan 3 Wheeler, and we have to get from Cheddar to the Welsh coast. So I let ’em go on ahead, wrap up warm and peer around the filthy aeroscreen. I doubt I ever get to the legal limit and every mile is dirty, wet and cold. It’s perfect. 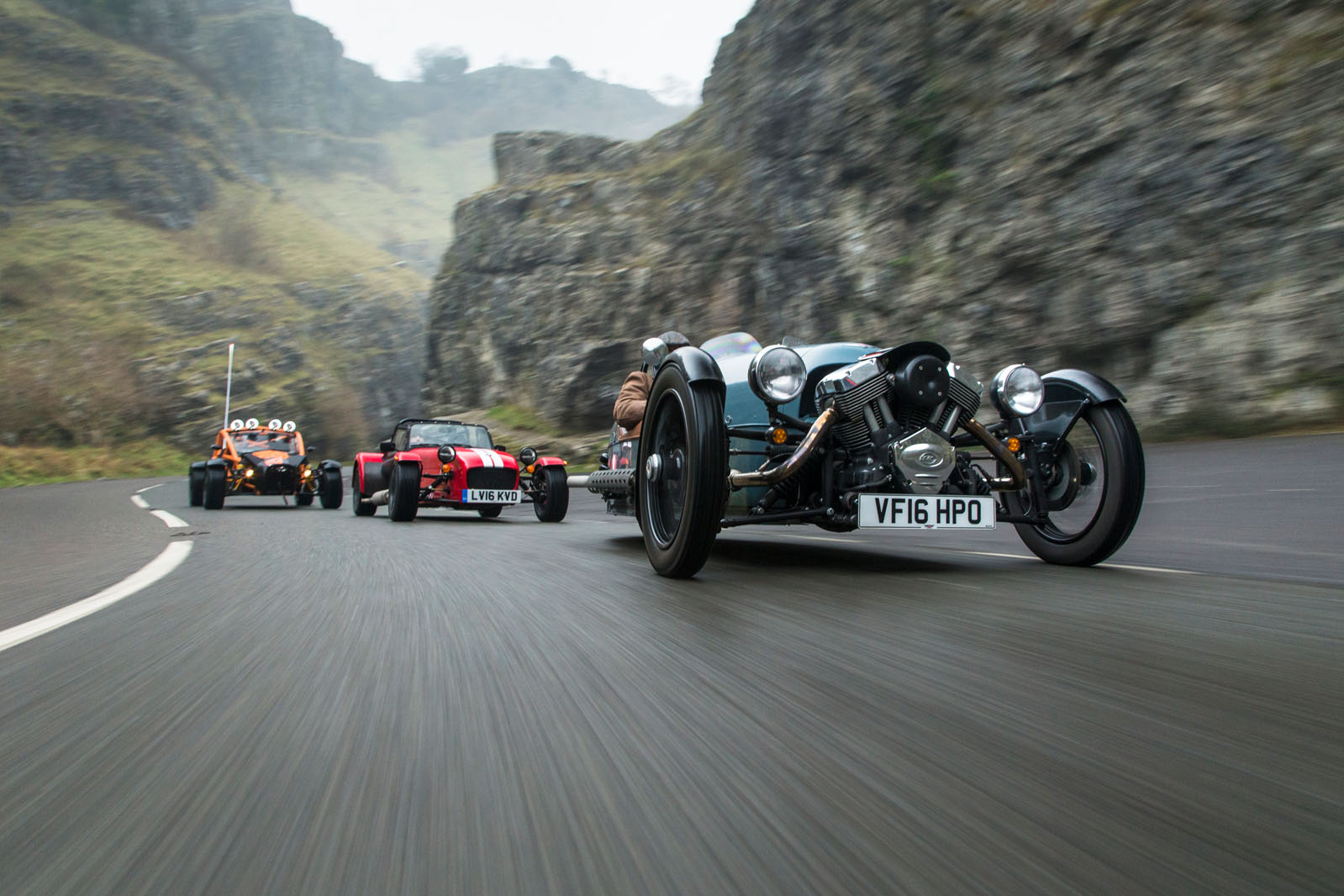 The 3 Wheeler isn’t a subtle car, but unlike a goldplated Rolls or a straight-piped supercar, the reactions to it are overwhelmingly positive. In either of the aforementioned attention-magnets, my ill-advised trip into a gridlocked central Southampton during a rainy boat show weekend would have been met with hand gestures and looks of disapproval. Instead, strangers admired, took photos and asked questions about the Morgan. I defy you to find another car more approachably fascinating to all who witness it.

My time with the 3 Wheeler reminded me starkly how important it is to dress appropriately. On one trip from Malvern to Gloucestershire I neglected to wear the right gear, and it rained. The screen protects most of your torso but leaves an unprotected zone running diagonally across your upper body from left eyebrow to right elbow. The weather turned really cold and wet, and water began to run down between my thighs. On my next wet trip I dressed carefully in motorbike waterproofs and laughed at the rain — while enjoying better wet-roads visibility than in any conventional car I can think of. 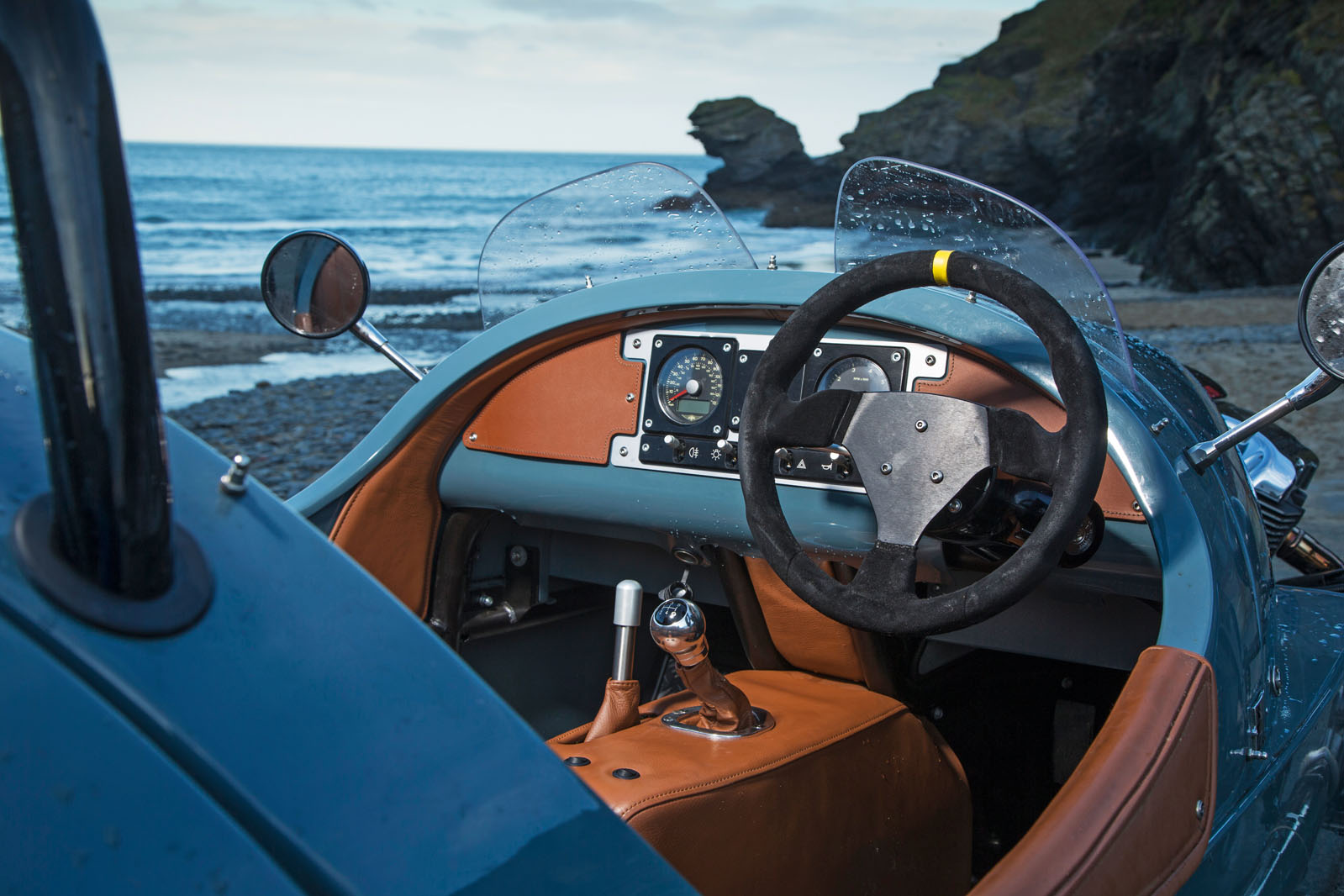 I never struggled to fit my ample backside into the Morgan. But, frustrated by the shortness of my road test colleagues, I did take a spanner to the 3 Wheeler’s pedal box to find out how easy it might be to create the couple of inches of leg room necessary for me to be able to drive the car comfortably. Turns out, it’s not very easy. There are three possible pedal box positions, the upper two being easy enough to switch between by a combination of leaning into the footwell, groping under the car and indulging in some artful swearing. But the farthest position makes the brake pedal servo and related cabling a very tight fit in the bottom of the footwell and, without disconnecting and adjusting various pipework, I couldn’t quite make the pedal box’s bolts drop in. So I settled for an uncomfortable squeeze every time I drove the car, but still dearly loved every minute.

Nothing focuses the mind like trying to clasp on the multi-toggled storm cover for the 3 Wheeler in the rain in the night. Getting it on and then yanking it off was always a fiddly process, but using it was essential for protecting the interior overnight. Keeping half of it on was a great way to keep your luggage dry and safe on longer journeys, too. 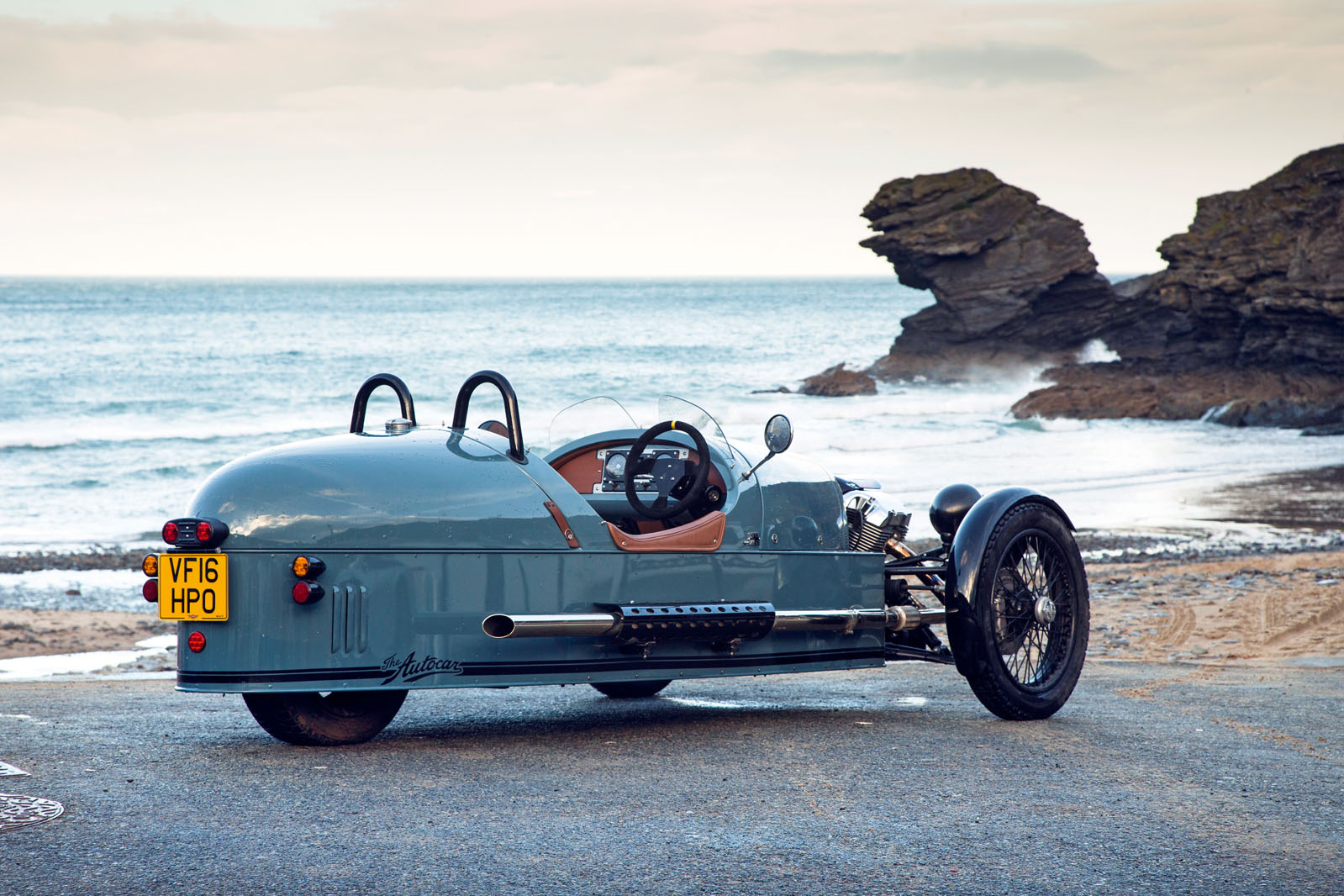 Everyone has a story about suffering from exposure in the wind-blasted outcrop that is the 3 Wheeler’s cabin, but like a Surrey rambler relating their experience of the cold to a Nepali Sherpa, all pale in comparison to my six-hour round trip to Malvern in November to have a winter tyre fitted. The lesson, learned about 15min into the journey, is that you shouldn’t remove the visor from your full-face helmet just because it spends most of the year getting in the way in cars fitted with a roof. Without it, the sub-zero wind has a way of finding not only the naked flesh of your face but also the neck funnel formed by the three coats you’re wearing. With the sun up, the effect was bone-chilling; with the sun down, no amount of desperate position-shifting on the heated seat was enough to keep my body temperature above hypothermic.

Somewhere along the M4, I entered a blinkered, near catatonic nether zone that would have unnerved a Royal Marine mountain leader. I threw in the towel at Bracknell and drank service station coffee until the feeling returned to my cerebral cortex. Had the experience occurred in a Ford, Hyundai, Peugeot, BMW or Vauxhall, the width and breadth of the grudge would’ve been enough to put me off for life; in the 3 Wheeler though, any resentment evaporated in the morning light of the winter sun and the warm, mechanical glow of Morgan’s memory-maker.