BACK TO ALL NEWS
Currently reading: Lynk&Co 04 hatchback tests ahead of 2020 European launch
UP NEXT
New Kia EV9 primed as premium electric range-topper

Geely-owned brand will share Volvo platform, and will launch in the UK and Europe with hybrid or electric variants only
Open gallery
Close

First prototypes of a new Lynk & Co hatchback, expected to be dubbed 04, have been photographed testing ahead of an expected European market debut in 2020.

Original expectations for the brand, part of Volvo’s Chinese parent Geely, were for it to focus on building SUVs and saloons - market priorities for China and the US. However, as part of Lynk & Co’s target for a full range launch in Europe in 2020, it is now well under way developing a hatchback variant that could be a volume seller alongside the SUVs.

Styling-wise, even with disguise it’s clear to see that the hatchback will retain a strong family resemblance to the already revealed 01 and 02 SUVs, and the 03 saloon.The familiar front-end with dual horizontal intakes and split-level headlights features, while the trademark L-shaped tail lights can be seen at the rear. 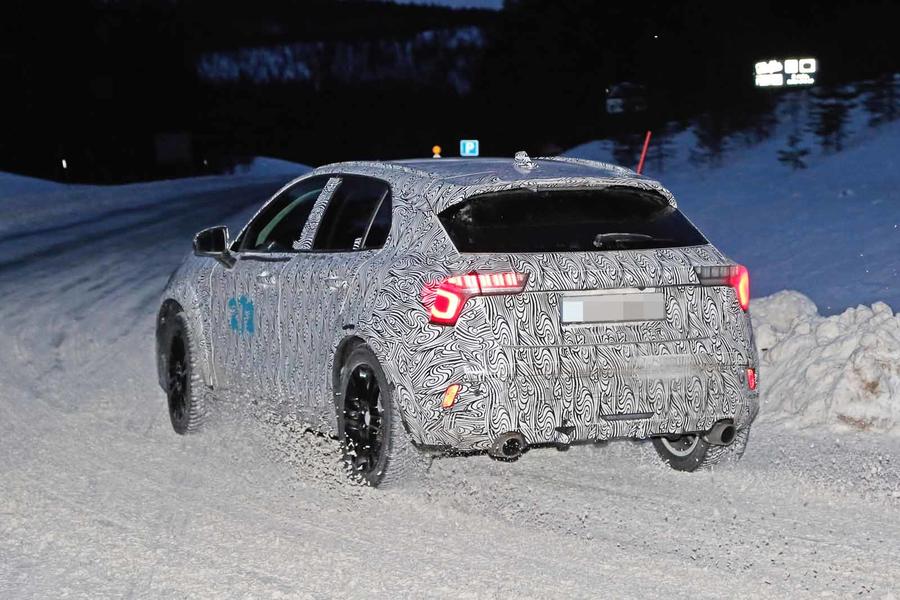 Like its siblings, the hatchback will use Geely’s Compact Modular Architecture (CMA) platform, also used by Volvo for the Volvo XC40. The modular platform allows different wheelbases, ride heights and rear tracks. The hatch is expected to be the smallest model in the line-up, sitting below the 4.5m-long 02.

Lynk & Co will focus on offering electrified only variants in Europe, while Chinese market models feature petrol engine options as well. Expect the hatchback to make use of the already-confirmed 1.5-litre three-cylinder petrol engine mated to an electric motor on the front axle for the plug-in hybrid model, while a straight hybrid could also feature. Pure electric powertrains are expected later on.

Bosses are keen to break public perception of Lynk & Co as purely a Chinese brand, with its models largely designed and engineered in Sweden by a team of “international talent”. It’s expected to make use of Volvo’s production facilities, with the first European models being produced later in 2019. A UK market launch will commence around the same time.

Lynk & Co: our competition is Uber, not car firms

So if its engineered in Sweden and manufactured in Volvo plants, remind me how its any more Chinese than Volvo is?   In any case given that I'm typing this on a Chinese manufactured device (as is nearly everyone else) then writing off the Chinese seems a bit short sighted

I think the problem is more likely that its not Chinese enough.   If you could get something with Volvo DNA, manufactured in China and thus sold at a lower price point I can see the appeal.  As it is, why not just have a prettier Volvo for the same cash?   Potentially the same 'why bother' issue that DS have.

But its nonsense to say you cant establish new brands.  Tesla and Dacia disprove that at opposite ends of the market.  But there has to be a USP.   Maybe theres not much profit in it, but I'm surprised no-one else has copied the Dacia model - cheap but cheerful cars on a one generation old parent company platform.  Surely all the other multinationals could do likewise?

Maybe theres not much profit in it, but I'm surprised no-one else has copied the Dacia model - cheap but cheerful cars on a one generation old parent company platform.  Surely all the other multinationals could do likewise?

They do and have done for some time, just, we don't usually see them in the UK or Europe.

Is it true that the name is a cross between Lynx aftershave and Legs & Co the dance group from Top of the Pops?

The name is certainly offputting but the product has potential.

"Bosses are keen to break the perception that this is purely a Chinese brand".....I bet they are too!  It is a Chinese Brand with a silly name and 'trademark L shape lights (wow, that'll swing it!),

I cant imagine anyone with an IQ above 50 will be fooled by the Volvo connection.....since Lynk are pricing their way into the premium sector - why wouldnt you buy a Volvo instead with their own range of Electrified cars iminent and known residual values?

With current over supply of vehicles in Europe, the last thing we need is another brand on the cluttering up the market.

I cant imagine anyone with an IQ above 50 will be fooled by the Volvo connection....

Maybe it's the snobs who are the fools.