BACK TO ALL NEWS
Currently reading: Insight: how new BMW platforms can cope with multiple powertrains
UP NEXT
New 2023 Porsche 911 GT3 RS is "most track-focused" ever

Insight: how new BMW platforms can cope with multiple powertrains

BMW’s plan to launch future models based on one of two modular architectures will include a rear-wheel drive platform that can house everything from downsized internal combustion engines to three-motor all-wheel drive electric cars with more than 800bhp.

BMW ramps up plans to expand i range with SUVs

BMW is hedging in bets in being able to respond to every type of drivetrain a customer might desire as it “simply cannot be sure” how much demand there will be for any particular drivetrain in the future, according to Lutz Meyer, who works on BMW’s product strategy for architectures.

Each of its models will be capable of being equipped with a standard internal combustion engine, a plug-in hybrid drivetrain to electrify the axle not driven by the engine, or a fully electric one.

BMW will offer the electric motors in different ‘sizes’, with a small 134bhp and medium 255bhp for entry-level electric vehicles, and a large 335bhp one and extra large 402bhp-plus version for performance models.

One of two core battery packs will be fitted depending on the type of car, and they can be made bigger or smaller depending on the range desired by the customer. They will always be packaged in the floor, so won’t reduce cabin or boot space.

There will be a ‘tall’ battery pack for SUV models, and a lower one for saloons, hatchbacks, coupes and cabriolets, with these models receiving a 10-20mm increase in height for their next generation to accommodate the battery pack installed in the floor.

BMW’s entry-level electric car is likely to be a future front-wheel drive 1 Series electric hatchback, with a single 134bhp motor on its front axle with a lithium-ion battery pack that’s good for a 186-mile range, and a 0-62mph time of 6.9sec. A standard rear-drive 3 Series will use the same battery pack but with a 268bhp motor on the rear.

The range-topping BMW electric car could in theory use the largest battery pack that’s good for a 435-mile range and three electric motors, two at the rear and one at the front, to create a car with sub 3.0sec 0-62mph performance and 800bhp-plus.

BMW could also offer the larger battery pack with the smaller electric motors as a way to eek out even more range, similar to the low CO2 diesel specials many manufactures have offered in recent years.

The configurations will ultimately be decided by the product and marketing departments, and offered based on customer demand. But anything is theoretically possible, according to BMW, and it has designed the architecture to support it.

The first electric BMW that’s not a dedicated i model will be the iX3 in 2020, which will be the first to use elements of this so-called fifth-generation electric technology. 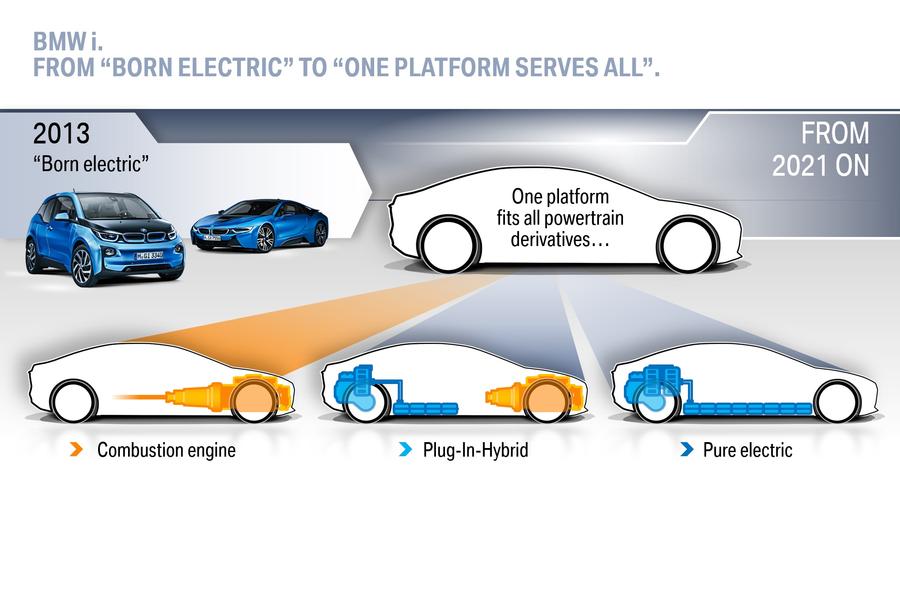 This will be followed by the next dedicated BMW i model, previewed by the recent i Vision Dynamics concept car, which will go on sale in 2021 with a 435-mile range and ready to go with full Level 5 autonomous driving should legislation by then allow.

It will be built on the development of the CLAR platform rather than a carbonfibre structure as with the current BMW i3 and i8, as BMW turns away from building costly dedicated architectures and instead spins its electric models off its standard modular platforms. 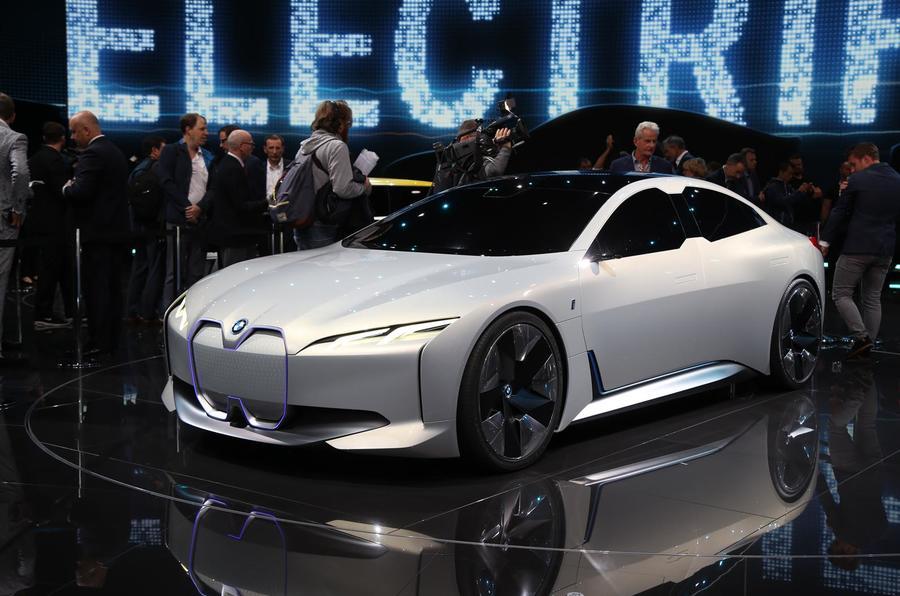 The electric Mini, due in 2019, will not be built on the new architecture, however, and will instead be built on an adapted version of the current UKL platform, which was not originally planned to spawn full electric models.

Plug-in hybrid models will also be overhauled under this strategy, with electric motors of up to 201bhp and 332lb ft offered and larger batteries with range of around 62 miles.

BMW claims all its electric motors will have the highest power density on the market, and offer no compromises on usable space for buyers inside their car. Andread Wilde, BMW’s head of powertrain concepts, added the firm is researching how to make electric cars sound better, and said he had “hundreds of different ideas”. He added: “An electric motor can still be different.”

BMW is also working on the development of solid-state battery technology to further improve the performance of batteries and increase their power density, but before then BMW battery chief Andreas Raith said there was still much to be improved with existing lithium-ion technology.

He rejected claims the BMW was simply replacing using up one of the earth’s resources in oil by hunting out the costly materials that make up a battery pack, noting the battery metals are all recyclable.

Raith said that BMW will soon show technology that allows pre-heating of battery cells, taking their temperature from zero degrees to 20 degrees Celsius on a cold day in the less than 30 seconds, boosting cold weather performance.

Both its architectures will be 48v, creating mild hybrids of even the standard internal combustion engine cars, which BMW will continue to offer.

BMW i boss Robert Irlinger also confirmed every BMW brand will be electrified, including Rolls-Royce.

The production i Vision Dynamic’s autonomous technology also continues to be tested by BMW, in a 40-some strong fleet of autonomous 7 Series prototypes driving between Munich, Germany and Genoa, Italy, as well as in Israel and the US. This will grow to 140 in 2019, and 250 soon after.

BMW is running millions of miles of virtual testing in laboratories for machine learning and developing the artificial intelligence of its autonomous technology to read and respond to road conditions.

Crucial developments in 2021 to allow the i Vision Dynamics to offer full autonomous driving will be the roll-out of a 5G mobile network and HD mapping through mapping company Here, which it owns with Daimler and Audi.

Next year, BMW will begin to industrialise the technology to make it production-viable – the kit currently fills the boot of a 7 Series. Next-generation sensors, laser scanners and radar systems, and the technology to power and process them, will help facilitate that.

BMW ramps up plans to expand i range with SUV

... for making this call a few years ago now.

"Researching how to make

Thank God, can you imagine how boring an M performance car would sound?! Good on them for knowing sound is a key factor on certain market segments.

No I cant - I dont think an

No I cant - I dont think an electric motor sound boring at all, currently theyre not loud enough (all thats needed is a mic) but the sound they make is cool.