BACK TO ALL NEWS
Currently reading: Honda Civic Type R to be refreshed next year in hot hatch title defence
UP NEXT
Vauxhall boss: “We need to make vehicles with greater appeal”

Honda will respond to increasingly tough competition against the Civic Type R by refreshing the 316bhp model for 2019.

Seen here testing in Germany, the British-built Japanese hot hatch is due to receive minor design changes including tweaked bumpers and new headlights, as shown by the placement of camouflage on the development car.

Honda is also likely to apply the latest infotainment updates to the Civic range, including the Type R, which could include the return of a volume rotary knob for the sound system (the current car uses touch buttons). But don't expect any major changes to the cabin design and ergonomics, the latter of which is among the very best in this segment for driving. 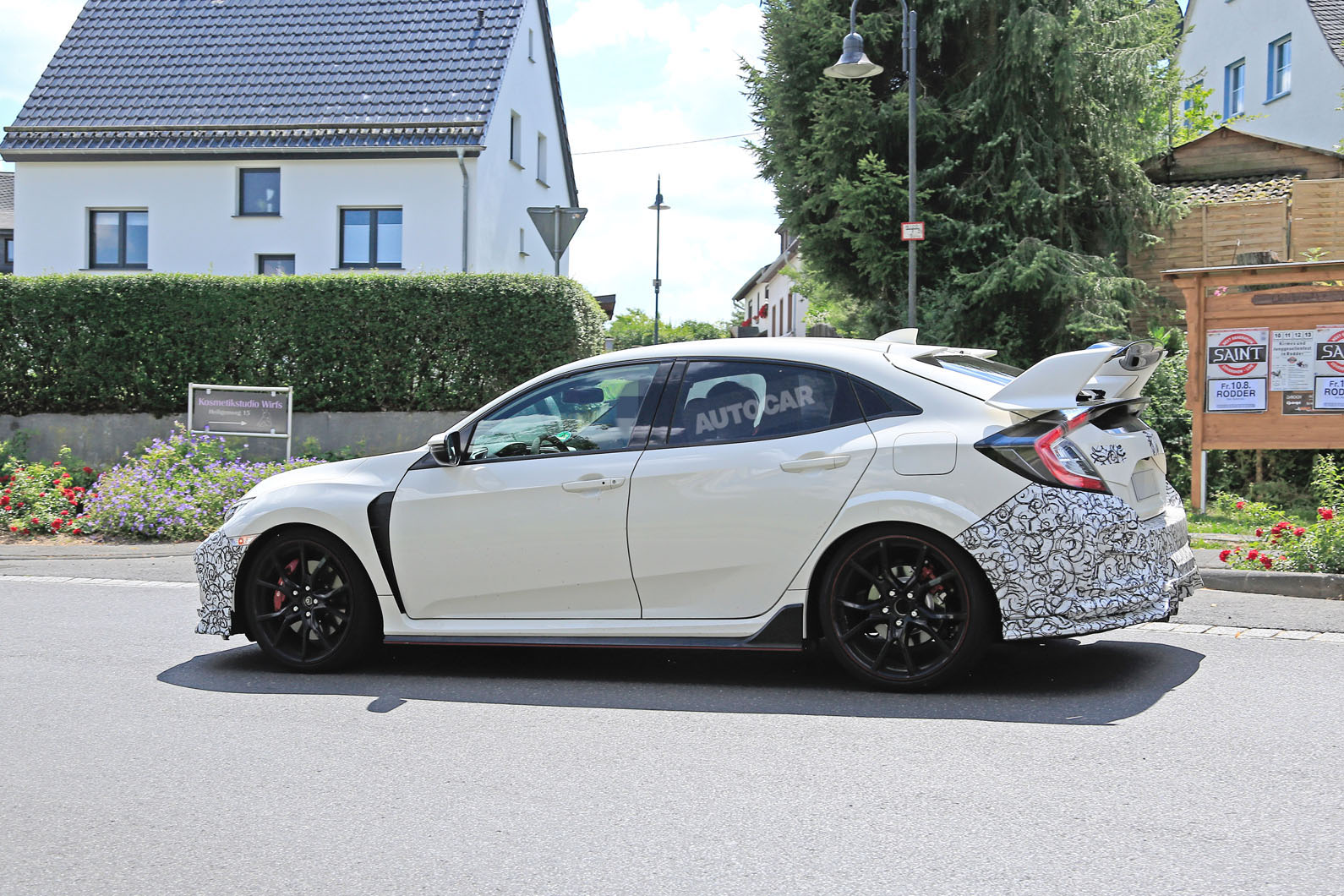 Pressure from newer rivals such as the Renault Mégane RS and Hyundai i30N, both of which are cheaper than the Civic Type R, might encourage small adjustments to the car's chassis to further enhance its adjustability; the Mégane RS is regarded as a slightly sharper steer when equipped with optional Cup suspension.

But engineers are unlikely to want to drastically alter the car’s proven formula, including a considerably more forgiving ride than its predecessor's, and the FK8 model still ranks as the quickest front-wheel-drive car at the Nürburgring.

The same is predicted for the turbocharged 2.0-litre powertrain, which, like with previous facelifted Civic Type Rs, is expected to stick with its launch output. But with 316bhp on tap, it remains among the most potent cars of the class, outpunching the Mégane RS and i30N by 30bhp and 35bhp respectively. 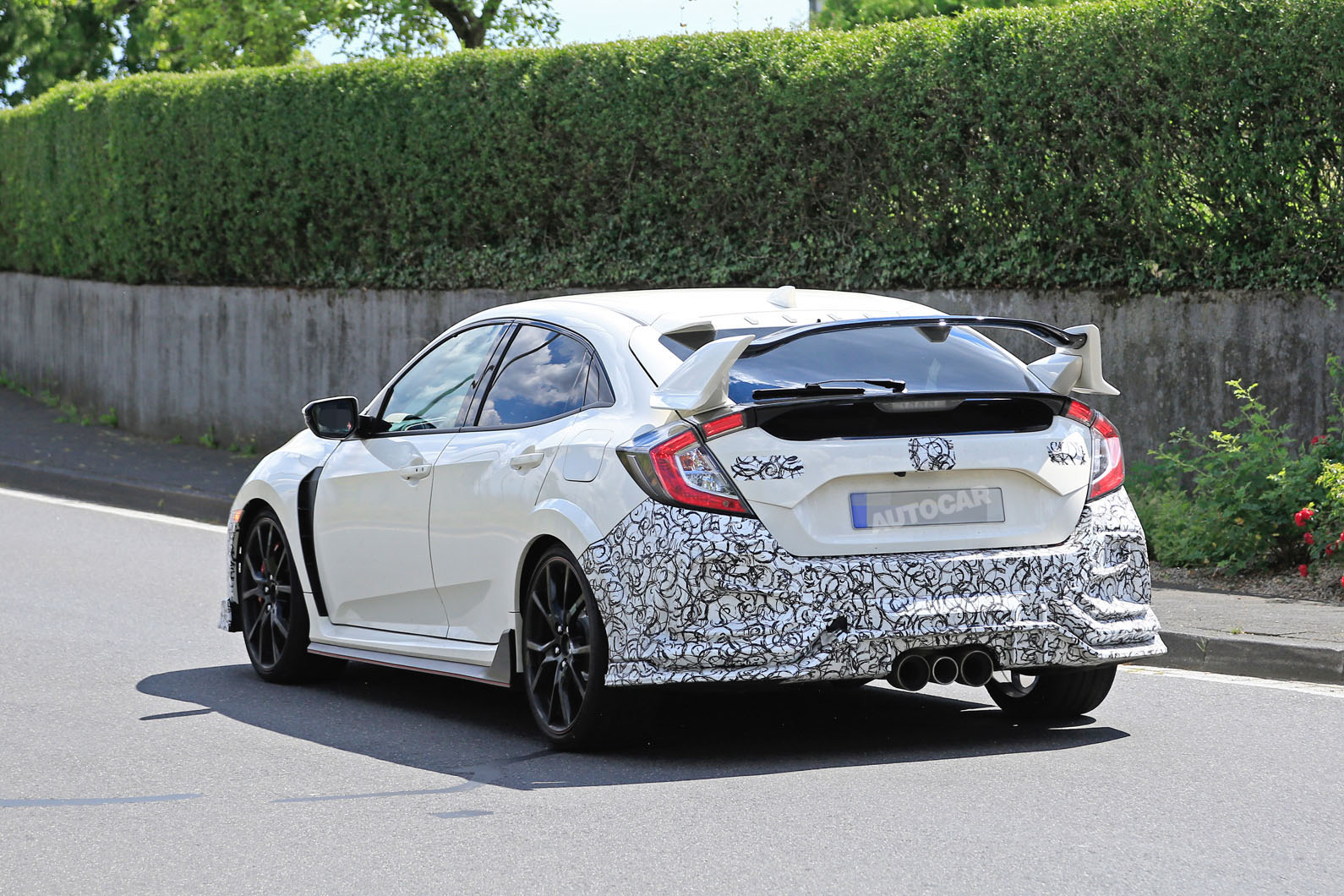 Even the Volkswagen Golf R falls short of the Civic Type R by 20bhp, due to its recent power downgrade, following the fitment of new exhaust hardware to ensure the model conforms to the latest WLTP regulations. Honda is therefore unlikely to feel pressed into uprating its Civic's boosted four-pot.

Global production of the FK8 Civic Type R has been exclusively handled by Honda’s Swindon plant since it launched last year. The updated model will continue to be produced there.

Although the cars roll out of a British factory, right-hand-drive models are produced around a month after the first left-hand-drive variants due to greater global demand for the latter. This will remain the case when the updated car arrives next year.

Strange that they should tell the press about this

Customers might just be inclined to delay ordering so that they could benefit from these subtle improvements, unless of course the 2018 model has sold out?

I wonder whether the aforementioned changes are shared with the new 4-door Civic which has just gone on sale, strangely without any press announcement or fanfare.  And it would be interesting to know whether this 4-door is an American import, or whether it is locally built?  If it's an import, then this might explain the lack of announcement - perhaps Honda UK don't want the arguably much more attractive saloon to cannibalise sales of the 5-door?

I wonder whether the aforementioned changes are shared with the new 4-door Civic which has just gone on sale, strangely without any press announcement or fanfare.  And it would be interesting to know whether this 4-door is an American import, or whether it is locally built?  If it's an import, then this might explain the lack of announcement - perhaps Honda UK don't want the arguably much more attractive saloon to cannibalise sales of the 5-door?

I believe the 4 door Civic is built in Turkey for the European market. Also odd is that you cant have the 1.5 in it in the UK, just the 1.0 and diesel, so they really dont seem to want it to be a success. However, i agree that the toned down bumpers do look rather better. I wonder if the Hatch will inherit the toned down look with the facelift.?

Great though this Car maybe the rear end lets it down,I mean is that design of Wing there because the original had it? Or, Could they have designed a neater solution to what this Car has now...?

Wouldn't it be nice if the

Wouldn't it be nice if the facelift included a completely new body shell. The current Civic must be one of the few cars that looked old when it was launched, the over fussy design was more like something a manufacturer was constantly adding details to, to 'freshen' it up.

A stripped our lightweight version  would’ve been on the cards...?

said it before- spend some

They'll need more than a knob to improve the present awful infotainment interface that some knob signed off. For a company famed for their engineering, how could they get it so wrong?

Everyone is so harsh...

...about the way the Civic looks.  Personally I think it’s a fantastic manga mash up, yes it’s over the top and of course it isn’t to what are seemingly becoming dour European tastes, but if everything was a Golf then the world would be boring!  The new Suzuki Jimny, a Japanese take on the Willy’s jeep, cool.  The Ignis is certainly more exciting than most city cars.  Lexus are furrowing their own strange look, with Toyota not far behind (well with one model and the slightly nuts GRMN), Dahatsui, whilst no longer on these shores (and to this day the roller skate Cuore Avanzato TR-XX R4 is one of the silliest things I’ve driven) produce some great miniature strangeness.  The point of this lyrical wax, the Japanese are at least trying to do something a bit different.  The civic for me is a bit Godzilla, it wouldn’t be a great choice for my particular job and so I have an M140i (the lease deal was very good too), but, when that deal is up, I’d love a Civic.  BMW are often criticised for their design on these pages, it is a bit Russian doll, but whilst not terrible is ultimately staid.  The same can be said of Mercedes and even more so of Audi.  There in lies the issue, there isn’t anything that different, so praise the Civic Type R for it’s anime looks.

Everyone is harsh about it's

Being different by being pig ugly is no excuse for hideous vehicle design.

I would just like to know who signed off on this thing?

Chris bangle designed BMW cars are a case in point.

This civic fills the same category