From £18,9959
Latest Fiesta to wear red ST badge is more refined than predecessor and more satisfying to drive over a range of speeds than any of its rivals
Open gallery
Close

If you haven’t, and now that we have the car with us in the UK, here’s a technical once-over of the most eagerly awaited driver’s car of 2018 for those on a real-world budget.

Let’s start in the engine bay. The 197bhp 1.6-litre four-pot from the ST200 run-out special of the previous generation is replaced by an aluminium 1.5-litre unit whose three cylinders develop precisely the same power at precisely the same point in the rev range: 6000rpm. But for a solitary pound-foot, torque is also identical at 214lb ft, although it arrives substantially earlier at just 1600rpm and remains until 4000rpm.

All of a sudden, this car's vital statistics are in the same sphere as the Focus RS of 2002, although now, as then, it’s the chassis that holds more interest, not least because this is the first time the Fiesta ST has even been offered with a torque-biasing differential. Just like for the original Focus, it’s a mechanical job from British firm Quaife and it works alongside a torque-vectoring program that brakes the inside front wheel during cornering.

Ford hasn’t neglected the ST’s trailing axle, though. In fact, it’s on this torsion-beam set-up that the engineers have lavished most attention, fitting directionally wound springs — they’re curved, in effect — that are said to be highly resistant to the corrupting effect of cornering loads. There are also mono-tube dampers from Tenneco (twin-tube at the front), double-valved to more naturally absorb both high and low-frequency inputs. More on all this in a moment.

More than seven in 10 owners are expected to go for range-topping ST-3 trim. Do so and the standard 17in wheels are exchanged for a set of 18in ones. Either way, Ford has chosen to fit the car with Michelin Pilot Super Sport tyres — superb rubber in our experience, if no longer so widely available, and enlisted because the new Pilot Sport 4 didn’t grip enough during testing. 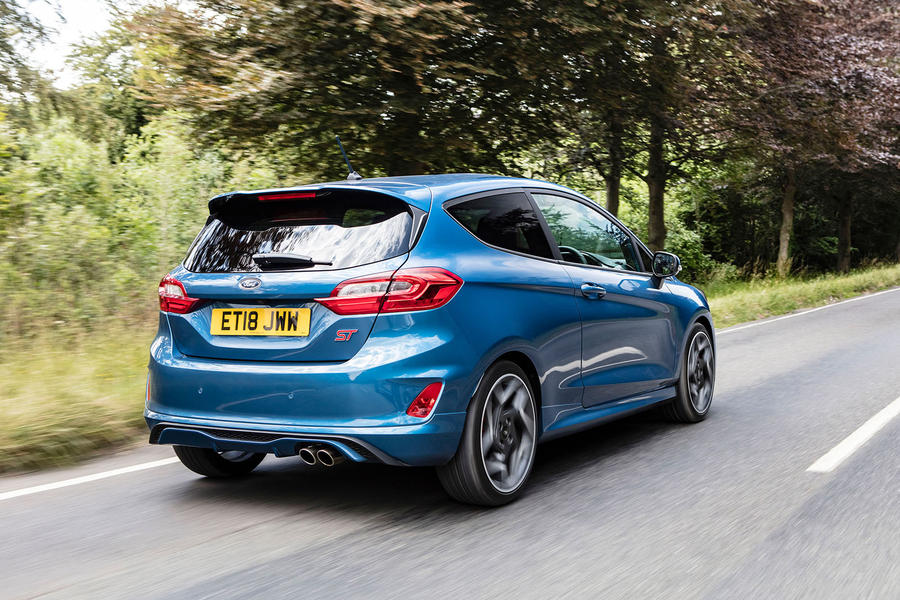 There’s no point stringing this out: on British roads, this car is sensationally good fun with just a couple of small caveats.

It starts with the basics. The pedals are well positioned not only for general comfort but also for heel-and-toe shifts. The standard Recaro bucket seats — and it seems amazing to even say this, given Ford’s track record with ergonomics — are positioned adequately low and offer generous support not only for the hips and waist but also the shoulders. You’re left in no doubt that this car is intended to be flung down B-roads, and although they’re trimmed with leather in top-spec ST-3 cars, you might actually prefer the pared-back cloth of the entry-level ST-1 model. The shape is the same either way.

The steering wheel is of a good size but slightly thick, and once on the move its motion is heavier and a touch more elastic than that in the previous car. It has heft, in short, and with the lower driving position it lends an uncharacteristically serious tone to proceedings.

Glance at the transmission tunnel (the lever itself remains oddly far down, as though Ford’s development engineers have atypically long arms) and you’ll notice a mode select button. This is a first for the Fiesta and switches the powertrain between Normal, Sport and Race, with throttle response, ESC and exhaust tone altered accordingly. In Race, you’re permitted 60deg of yaw before the electronics kick in; this, come to think of it, is two-thirds of the way to being entirely sideways.

Here’s the thing, though. With a hearty one in 10 Fiestas sold expected to wear the red ‘ST’ badge on its grille, Ford has prioritised upping the car’s ‘usability’. To this end, those frequency-selective dampers work well, because out on British roads the car doesn’t crash like it used to, particularly at its trailing axle. The ride is still firm, mind, and notwithstanding a hint of float that's forgivable in a supermini, movements are very closely controlled.

Ford is quite rightly proud of the fact the Fiesta ST is the only car among its peers to feature a rear axle that’s stiffer than the front. In fact, this little hatch packs the greatest rear roll stiffness of any product in the Ford Performance range (14,000Nm per degree, since you asked) and that, fundamentally, is where the magic lies.

In a similar fashion to the larger Honda Civic Type R — our current full-sized hot hatch champ, by a margin — the Fiesta ST feels predisposed as it gently rotates its rear axle through the early stages of a corner. And with addictive delicacy. Just a touch of the brakes (and, being slightly over-servoed, it is just a touch) or a small lift of the throttle and you’re there, those not-quite-passive dampers doing a fine job of retaining control.

On the way out of corners, you’ll realise why Ford took the decision to fit Super Sport tyres. This Quaife differential isn’t as tightly wound as kerb-sucking Drexler hardware found in the more hardcore Vauxhall Corsa VXR variations, but it’s still hugely effective and, frankly, much better judged.

Owners of the previous Fiesta ST may need a short period of recalibration, in fact, because the liberties you’re now invited to take with the aluminium-finished throttle pedal can seem ridiculous. Be it in second, third or fourth gear, tightening radius or short, sharp switchback, more times than not the car just gets its nose down and goes.

Through the very tightest corners, the Fiesta ST has yet another trick up its sleeve, but it’s difficult to pin down exactly what it is. Perhaps it’s to do with the bent ‘force vectoring’ springs, but during the compression stroke the rear seems to help the car pivot through the bend. It’s a sudden but subtle effect, and gives the car stunning agility.

Now, those caveats. The electromechanical steering is unusually quick, with a ratio of 12:1. Along with the corrupting influence of the limited-slip differential, on rougher road surfaces the chassis can become flighty and a bit erratic. For some, this will be the raw edge the car needs given the cabin and damping are that much more polished than before. For others, it’ll get tiring and, just maybe, they’d be better off without the Performance Package.

Of less concern is the gearshift, which is short and accurate enough of throw but could do with feeling firmer and more sinewy. More Honda, frankly.

The merits of this new engine are also less clear. Superficially, it has more character, burbling excitedly at idle and spinning freely thereafter. It’s a bit uniform, though. Its tuned four-cylinder forebear in the old ST200 wasn’t as tractable for pootling about but it had a thick-set timbre that crescendoed to a crackling, nasal 6500rpm finale when you were on it.

There’s also been no noticeable improvement in turbo lag over the old four-pot; we might not have mentioned this were it not for the fact that one of the Fiesta ST’s rivals packs an atmospheric engine fettled by Lotus. Truly, by the standards of modern superminis, the Yaris GRMN’s throttle response feels almost sacred.

But going back to the Mk1 Focus RS, whose owners would struggle to surpass 30mpg at a cruise. This new Fiesta ST is every bit as quick as the old-timer but will return almost 50mpg on the motorway. Now that is progress, and it’s partially down to this engine’s ability to shut off and subsequently re-engage cylinder number one in just 14 milliseconds under light loads. 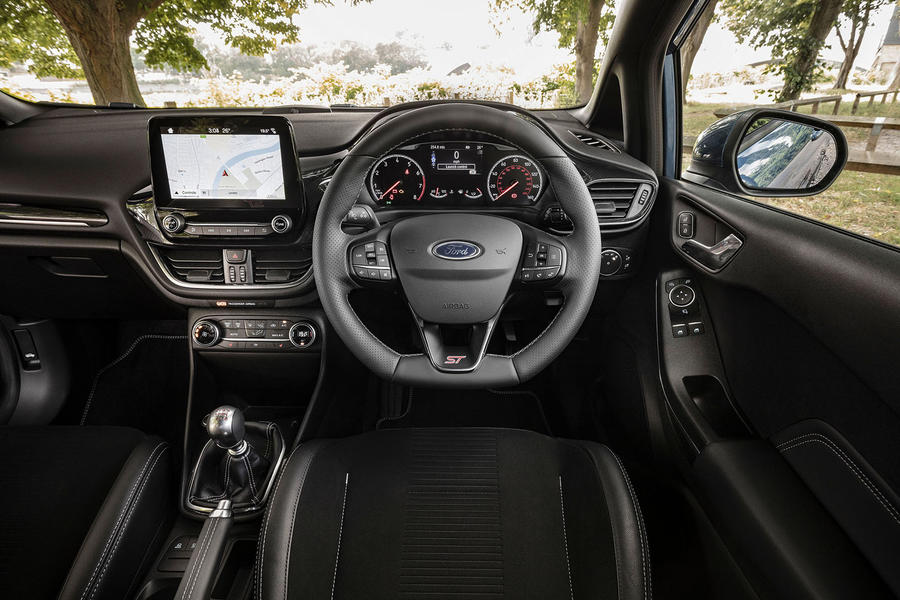 Yes. In ST-3 form and with the box for £850 Performance Pack vigorously ticked. You might also go for the £600 LED headlights that, if nothing else, look superb.

Casual drivers who simply want the plushest day-to-day Fiesta money can buy might rue the firm chassis, but because it’s so central to the car's dynamic appeal, it won’t bother Autocar readers. Neither will the quick steering, which enhances the car’s suitability for city driving. Improvements in fuel economy also leave us wondering if there’s anything with four wheels rather than two that’s this fun and any cheaper to run.

Rivals? There are some. This particular niche of the market currently has a varied and likeable cast. The extraordinary Yaris GRMN can be as thrilling as the Fiesta ST and feels more special; the VW Polo GTI is just as quick but easier to live with; a Mini Cooper S has a more mature, characterful cabin. Renault Sport will soon give us a new generation of hot Clio, and what a car that might be.

As it stands, the Fiesta ST is comfortably more satisfying to drive over a range of speeds than anything else, and that’s what really matters with this type of car. Next to its brilliant predecessor, some rawness has made way for refinement, but the handling remains downright stellar. With its latest effort, Ford has altered the Fiesta ST’s mechanical recipe but given us something just as exquisitely tasty. 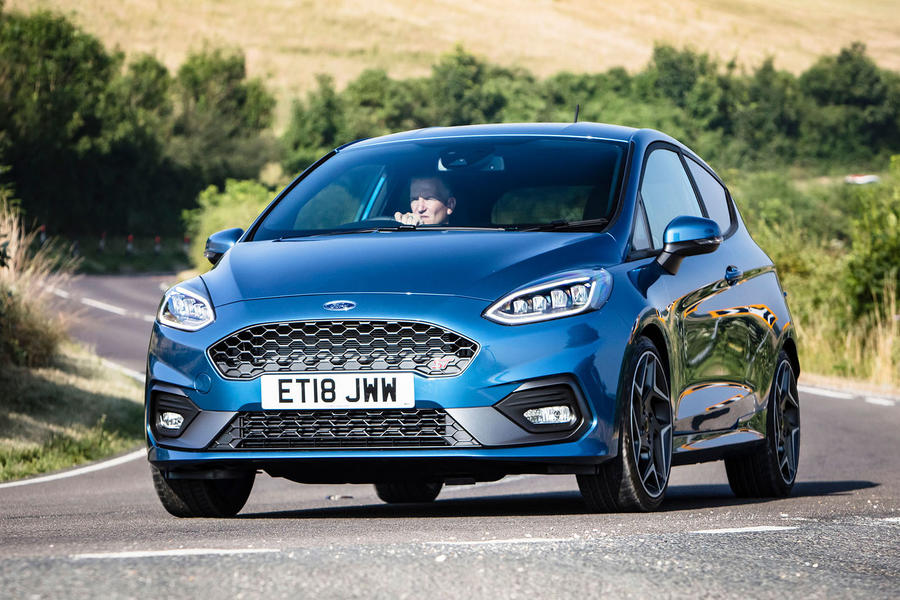 Looks good, a 3cyl engine is a little dissapointing i always think they sound a bit breathless and wheezy, but still it's nice otherwise.

Can we have editing please.

Fun to drive, but from what I've read elsewhere the ST's ride is very firm, even for a hot supermini. This is played down in this review!