BACK TO ALL NEWS
Currently reading: Genesis G70 rear-wheel-drive saloon guns for luxury German brands
UP NEXT
Dear Tobias: How the new CEO can fix Aston Martin

Genesis has unveiled its latest model, the G70, in a move that will see Hyundai's nascent upmarket brand further challenge Audi, BMW, Infiniti, Jaguar, Lexus and Mercedes-Benz for premium sales in selected markets from late 2017.

The distinctively styled saloon, on display at the LA motor show, will initially be denied from the UK, but Autocar can confirm that Genesis is working to introduce various models to European markets, including Britain, by the end of 2021.

“We’re aware of the potential of the UK market, but the focus right now is further establishing the Genesis brand in Korea, the US and China. Our longer-term strategy calls for Genesis to be present in Europe, but it will take a little time before we are ready,” says Soo Kim, head of product planning for the G70. 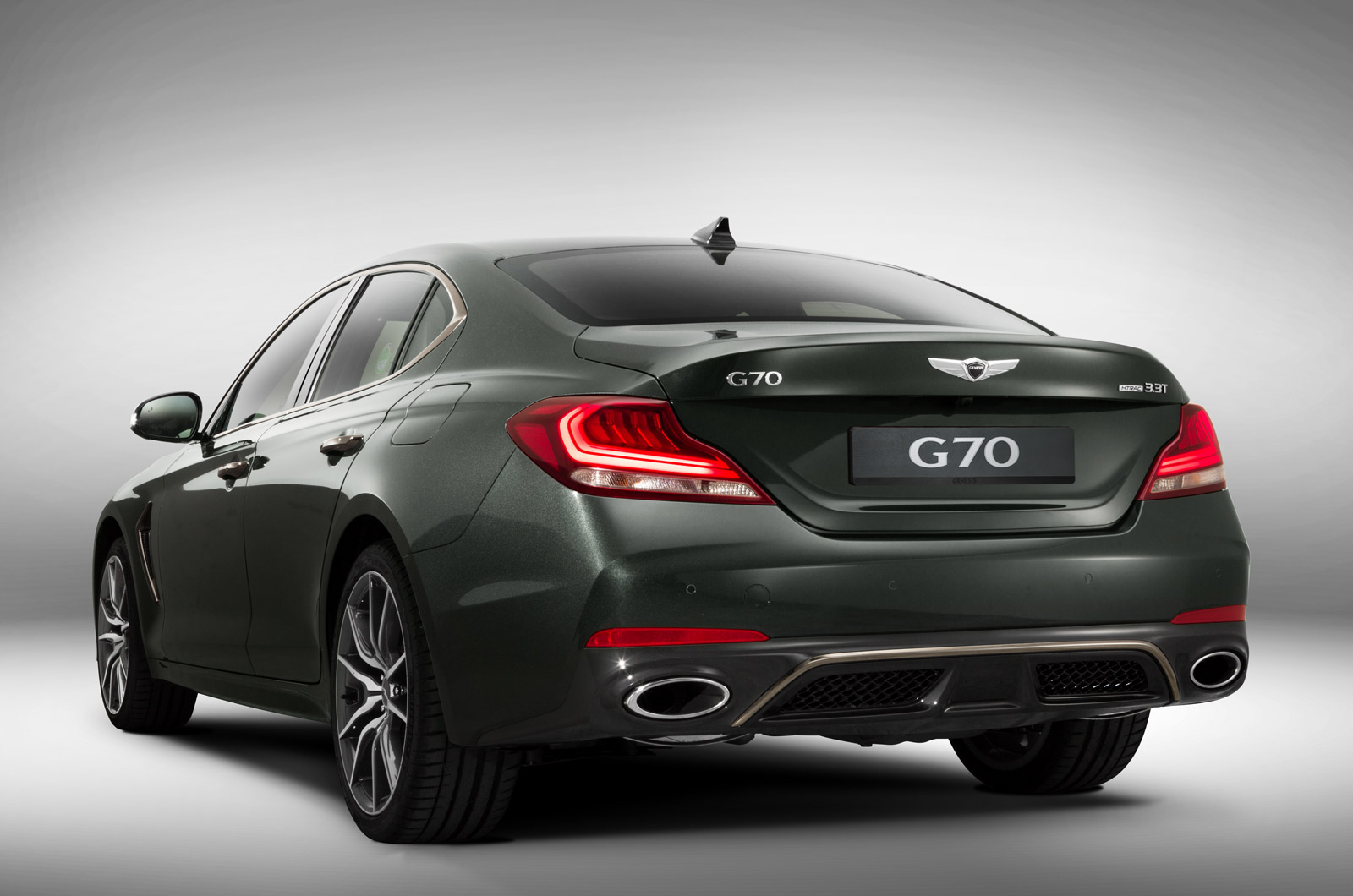 Conceived as a direct competitor to the A4, 3 Series, Q50, XE, IS and C-Class, the G70 will offer three turbocharged engines when sales begin, including a headlining 3.3-litre V6 petrol and a 2.0-litre four-cylinder direct-injection petrol unit, as well as a 2.2-litre four-cylinder common rail diesel, in both rear and four-wheel drive.

Revealed at a media presentation held in the Korean car maker’s new design studio at its Namyang research and development centre on the outskirts of Seoul, the G70 rides on a newly developed rear-wheel-drive platform, elements of which are shared with the recently introduced Kia Stinger.

In range-topping 3.3-litre V6 petrol guise, which produces 365bhp and 383lb ft of torque, the four-wheel-drive G70 Sport AWD is claimed to outperform the highly regarded BMW 340i xDrive for straight-line speed, with an official 0-62mph time of 4.7sec and a 168mph top speed. The engine channels its power through a standard eight-speed torque converter equipped automatic gearbox.

By comparison, the 340i xDrive uses a turbocharged 3.0-litre in-line six-cylinder petrol engine with 321bhp and 332lb ft of torque. It also uses an eight-speed automatic for an official 0-62mph time of 4.9sec and limited 155mph top speed. 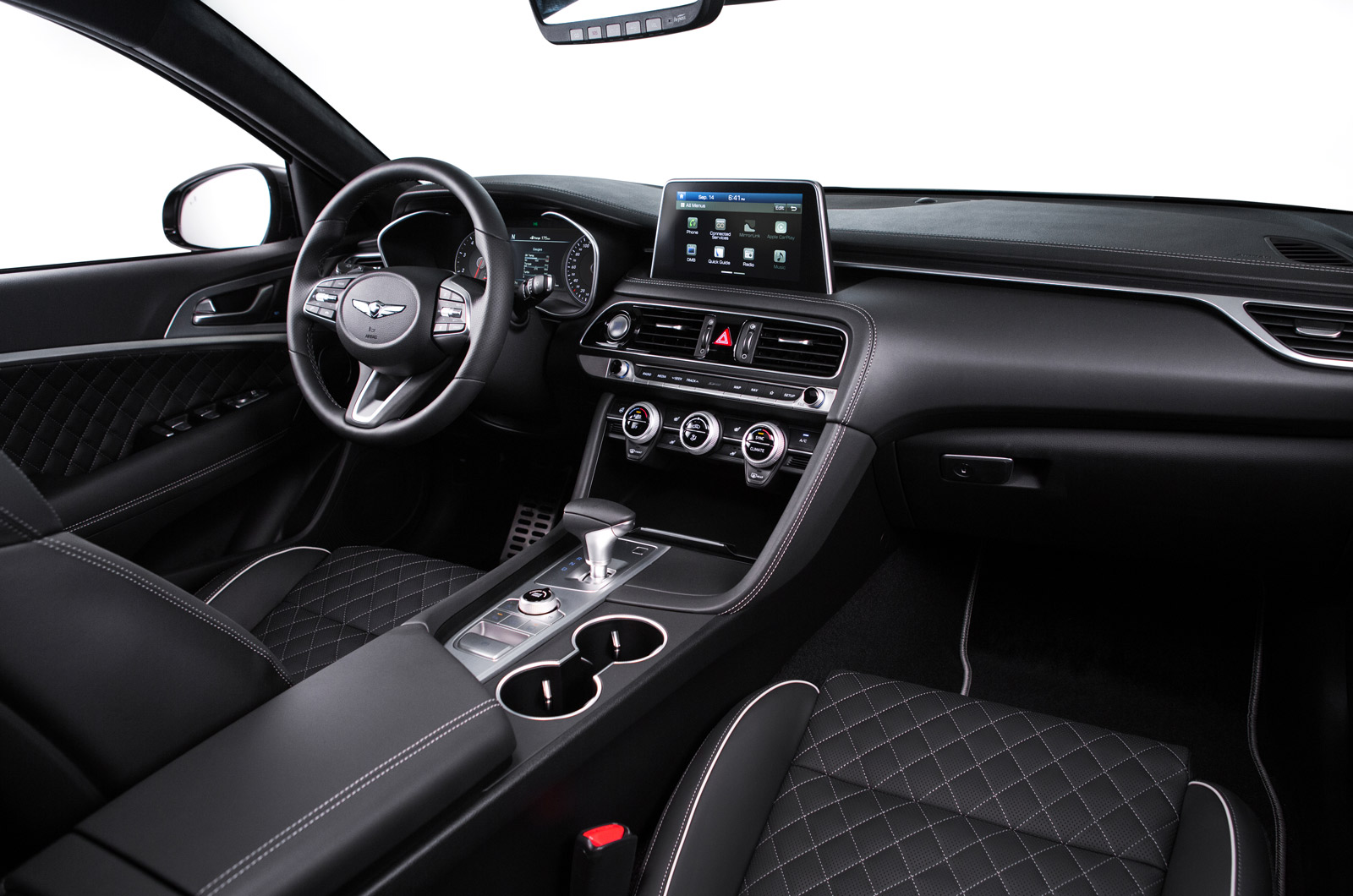 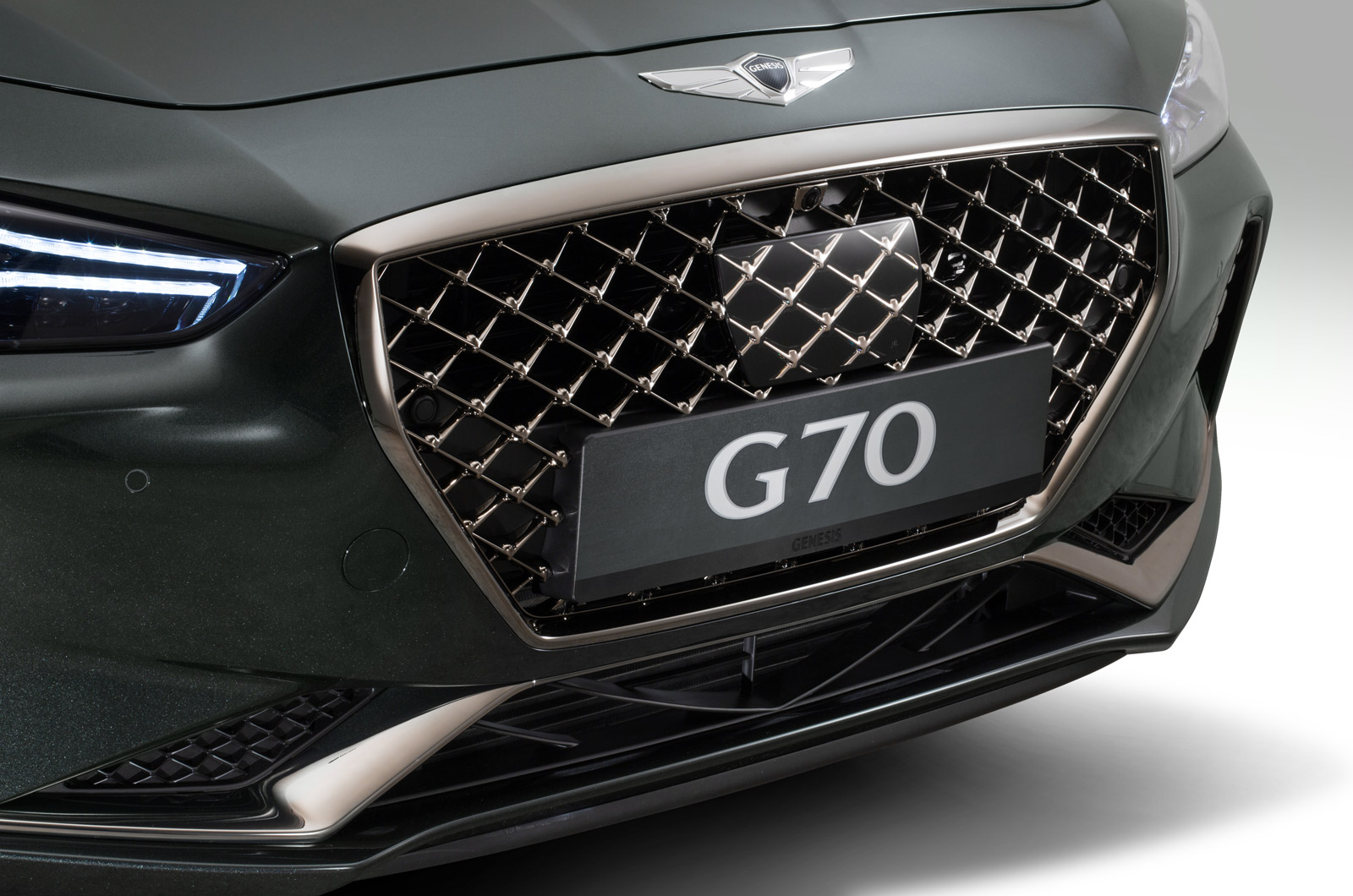 However, Genesis boss Manfred Fitzgerald insists the focus for the new model is less about all-out performance and more about delivering first-class customer satisfaction. “Ever since we launched the Genesis brand, we have continued to seek innovation. We want to lead the market as a latecomer; we are working to ensure Genensis’ competitive edge in safety, design, technology and comfort,” he says.

Fitzgerald’s comments are backed up by the latest JD Power Initial Quality Study, which put Genesis at the top of 13 brands in the premium segment. 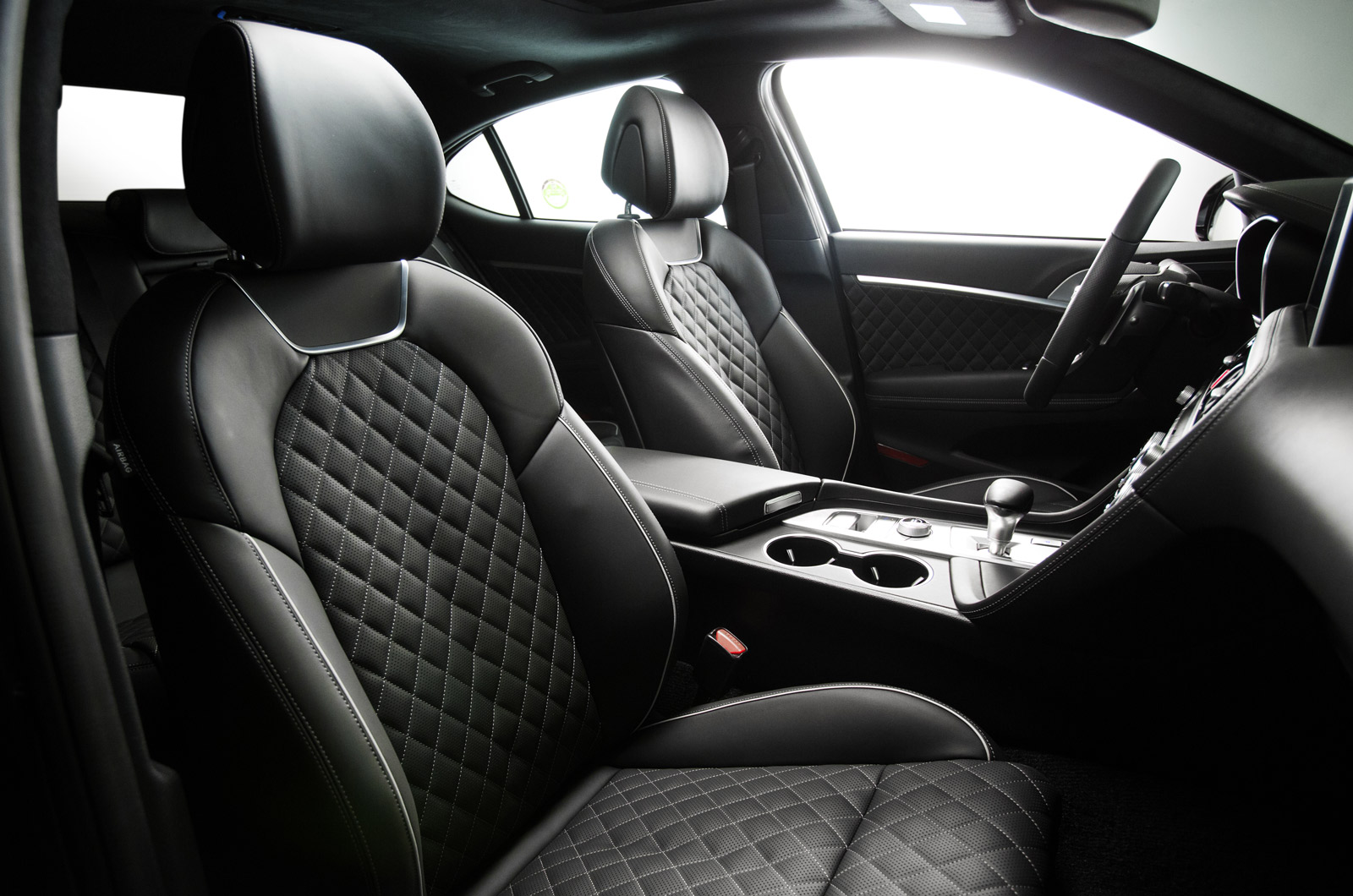 The G70 also receives a wheelbase that is 25mm longer than its key BMW rival at 2835mm. Buyers can choose between standard rear-wheel drive or optional four-wheel drive, with each of the three engines on offer in the domestic South Korean market.

Like all its key premium rivals, the new Genesis model uses a multi-link rear suspension. It is allied to a mechanical limited-slip differential and, in four-wheel-drive versions, a torque vectoring function. Genesis claims a front-to-rear weight distribution of 50/50. 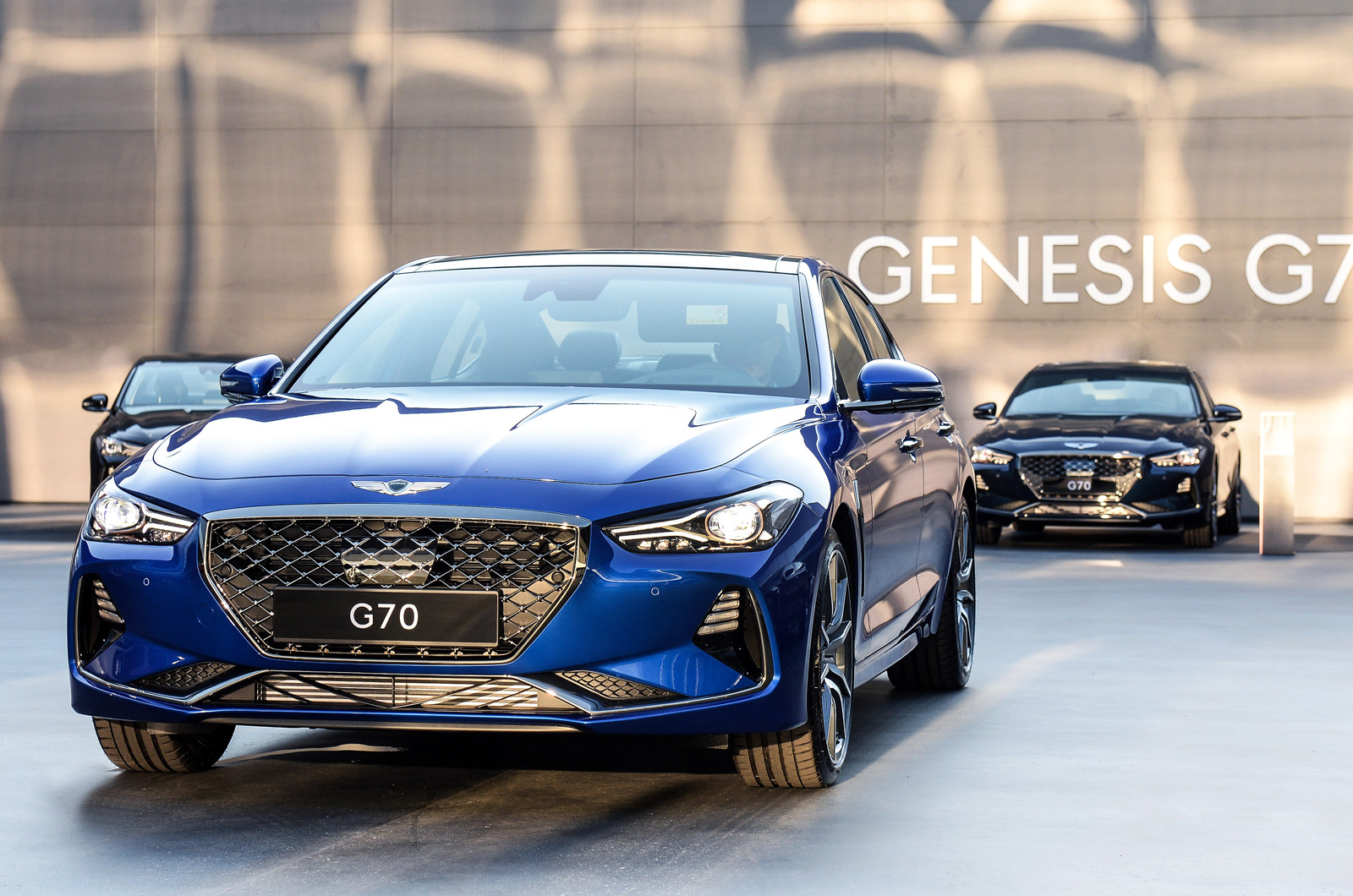 Genesis is out to disrupt the premium brand status quo with a string of new models planned for launch by 2021. Along with the G70, G80 and G90, the brand is also readying a range of SUV models, the first of which was previewed by the GV80 concept at the New York motor show in April. It is planned to form a three-strong line-up of SUVs that will be followed by the upcoming GV70 and GV90.

While the existing G80 and G90 were conceived within Hyundai’s traditional research and development structure, the G70 is the first to reflect design and engineering input from a hand-picked team, including ex-Bentley design boss Luc Donckerwolke and former BMW M lead engineer Albert Biermann, working under a separate Genesis structure.

Speaking at the unveiling of the G70, vice-chairman of Hyundai Motor Group R&D division Woong-Chul Yang said: “We will continue to focus our efforts on the development and expansion of the Genesis brand.”

Hyundai Genesis culled from UK line-up due to poor sales

What is it with Hyundai & Kia

What is it with Hyundai & Kia ?

This car is a cross between an inifiniti, audi, mazda, Benz etc..

whilst Kia cars are a cross between lexus, Audi, BMW etc..

I am quite sure that, if they commit to the process and deliver well-designed, well-built, well-packaged cars that use high quality materials, drive well and instill confidence, then Genesis can achieve the goal of becoming one of the accepted premium brands. It will take decades to get there though and they need to commit to that timescale. I suspect they'll do rather better than Infiniti seems to be doing at the moment.

I am quite sure that, if they commit to the process and deliver well-designed, well-built, well-packaged cars that use high quality materials, drive well and instill confidence, then Genesis can achieve the goal of becoming one of the accepted premium brands. It will take decades to get there though and they need to commit to that timescale. I suspect they'll do rather better than Infiniti seems to be doing at the moment.

I am intrigued why you the genesis will do better than infiniti....just curious.

19 September 2017
Yes it looks good. But the previous Genesis was such a huge sales success in the UK wasn't it not!
How manyou did they sell before pulling the plug? 30 wasn't it?.

It looks like an Audi/Jag/Alfa hybrid with a Merc rear end. ​I ve no problem with Kia trying to compete with the premium makers, but do they really have to style it in such a horrid, boring, bland, characterless and generic way ?

This will be an absolute winner in the UK.......not

"the UK will initially be denied the distinctively styled saloon" Call me negative but with the G80 not doing exactly what you'd call well over here, I don't think the G70 will fly out showrooms either. Sure, the exectuive car market is probably a tougher nut to crack than the one below, which the G70 is aimed at, but I can't see UK buyers overlooking the badge of an Audi, BMW. Jaguar to Merc in favour of this, even if it turned out to be a corker. If Lexus is struggling, and Infiniti more so, what hope does Genesis have.

As for the G70's looks, it's yet another Hyundai/Genesis model with styling cues nicked from other cars. Why can't Hyundai and Genesis be slightly more original like their sister company, Kia, is? The Stinger, which shares the G70's platform, is so much more stylish and desirable looking.

While this may not fly out of the showrooms in the UK, if it's sold here that is, looks wise inside and out it looks great (even if if has styling features from other cars) and it looks so much more stylish and appealing than a 3 Series, C Class or A4. It's right up there with the XE, Giuilia, Stinger and (I know it looks odd) the Lexus IS in my book. The interior of the G70 really looks good and appears better quality too compared to the naff Audi, BMW and Merc while cars from the Hyundai/Kia group are extremely reliable so this G70 will no noubt be even better and will simply knock spots off the unreliable German competition in terms of build quality.

Wish this every success, even

Wish this every success, even though it looks less compelling than the G80, especially the interior design.

Buyer inertia means that, given the accomplishment of the Lexus range which remains marginalised in the UK, Hyundai will face an uphill struggle.

Where do you start! Fine in the US market where the General buyer is a complete moron hence the success for this very type of car but in Europe forget it. Look at the VW Up. You can buy the same car from skoda for a grand less yet you'll be behind a poxy Up on the M62.

Where do you start! Fine in the US market where the General buyer is a complete moron hence the success for this very type of car but in Europe forget it. Look at the VW Up. You can buy the same car from skoda for a grand less yet you'll be behind a poxy Up on the M62.

Americans are morons for preferring substance and value over marketing drivel? But Europeans would rather pay more for inferior products? You have certainly proven who is the moron.