BACK TO ALL NEWS
Currently reading: Genesis GV80 SUV concept previews new design and powertrain tech
UP NEXT
Grand touring: 1000 miles across Europe in the new Alpina B3

The Genesis GV80 SUV has been shown at the New York motor show, with a new plug-in hydrogen fuel cell powertrain.

Hyundai’s upmarket sister brand Genesis hasn’t yet produced an SUV, so it’s likely that the GV80 concept gives us a glimpse at the brand’s first such production model, given the prevalence of the segment in the US and European markets. It appears that Genesis has squarely aimed the car at the same market segment as the Jaguar F-Pace, given the two cars' design-led approach and similar size.

Genesis claims that the GV80’s powertrain is similar to examples which will be used further down the line, as parent company Hyundai continues hydrogen fuel cell and electric vehicle (EV) development.

Inside, ash wood has been used on the dash as well as the floor, with carpets eschewed in favour of floorboards. The dashboard is dominated by a curved 22.0in digital display, which can be used separately by the driver and passenger, and extends into the instrument cluster. Software incorporated into the system includes handwriting recognition and capacitive touch, so the touchscreen can be used with gloves on.

There are two seats in the rear of the QV80, each with an infotainment touchscreen.

The styling of the GV80, including the spine running the length of the car, and the 23in alloy wheels, are likely to be toned down before production. However, the car carries an evolution of the brand’s current design language which is likely to make it to the next generation of Genesis models.

Genesis hasn't revealed any more details of the plug-in hydrogen fuel cell powertrain powering the GV80, but it's likely that the concept encompasses both battery electric technology, as well as persevering with the brand's hydrogen fuel cell efforts. 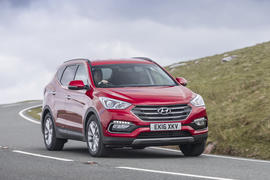