BMW faced an unenviable dilemma when it began developing the 2 Series Gran Coupe. It needed to create a car with an acceptable amount of room for passengers and a spacious boot without sacrificing handling. Engineers chose to start with a disadvantage in dynamism rather than one in roominess.

After all, technology can eliminate understeer, but it can’t yet make a set of winter tyres fit in the back.

Front-wheel drive it is, then. The Gran Coupe shares its FAAR platform with the third-generation 1 Series, among other models. Using this architecture cleared up over 34mm more knee room for rear-seat passengers than in the rear-wheel drive 2 Series coupe and a usable 450-litre boot. More space for people and stuff is difficult to argue against but the idea of a front-driven BMW sports saloon is much more contentious; pugnacious loyalists will argue Munich has taken leave of its senses. The firm doesn’t think the 2’s target audience (“young professionals” in marketing-speak) will mind. 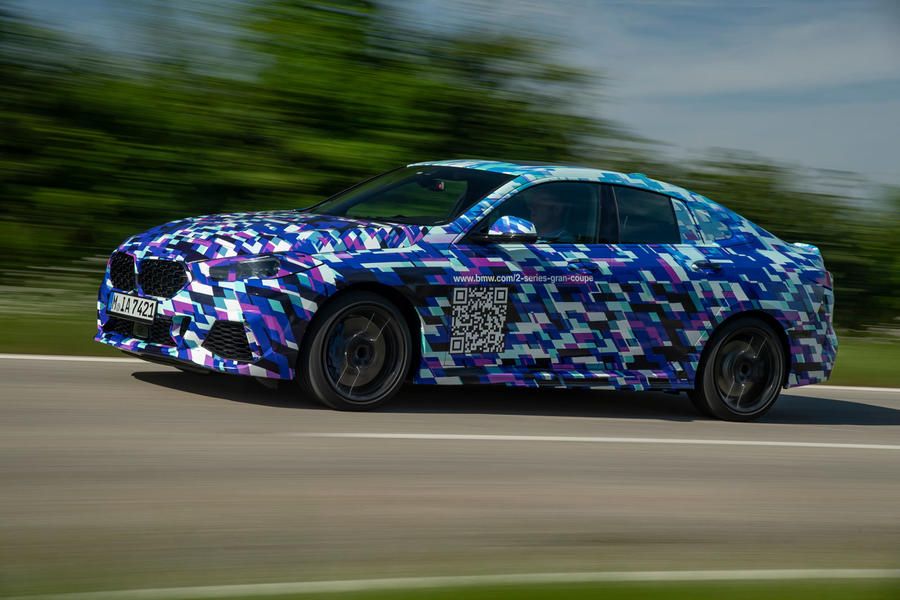 Besides, BMW came well prepared to this battle, with xDrive all-wheel drive for the upper end of the model line-up. The ARB traction control system shared with the 1 Series comes from the i3S, putting the engine’s ECU in charge of keeping the 2 pointed in the right direction by comparing data sent by the stability control system to the crankshaft’s rotation speed. This technology allows faster, more precise control of wheelspin. BMW also made the 2’s body stiffer by adding extra bracing in the engine bay and boomerang struts linking the rear sub-frame to the body.

Hardware and software come together to make the 306bhp M235i sharp, balanced and enjoyably predictable to drive. The xDrive all-wheel drive system does an excellent job of using both axles to juggle power as-needed to provide maximum grip, shuffling up to 50% of the turbo four’s output to the rear wheels. The Gran Coupe is inevitably a little bit front-heavy, it feels pulled rather than pushed, but a jaunt on the twisty roads around Munich reveals BMW’s chassis wizardry largely lives up to its promise of keeping understeer at bay. The steering is direct and well-weighted, though Kühberger warns development work is on-going and the car hasn’t been signed off yet. 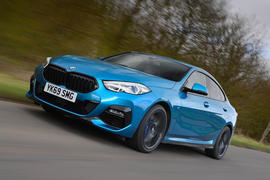 Take 1 Series underpinnings, top with a rakish body and what do you have? Let’s find out

The 2.0-liter shows its teeth as soon as we touch the throttle. It’s quick in a straight line, we peg its 0-60mph time in the 5sec range, and it builds speed in a smooth, linear manner. The M235i reaches and holds autobahn speeds with the confidence we expect from a BMW and flicking the drive mode selector into comfort turns it into a docile cruiser that goes easy on the spine. 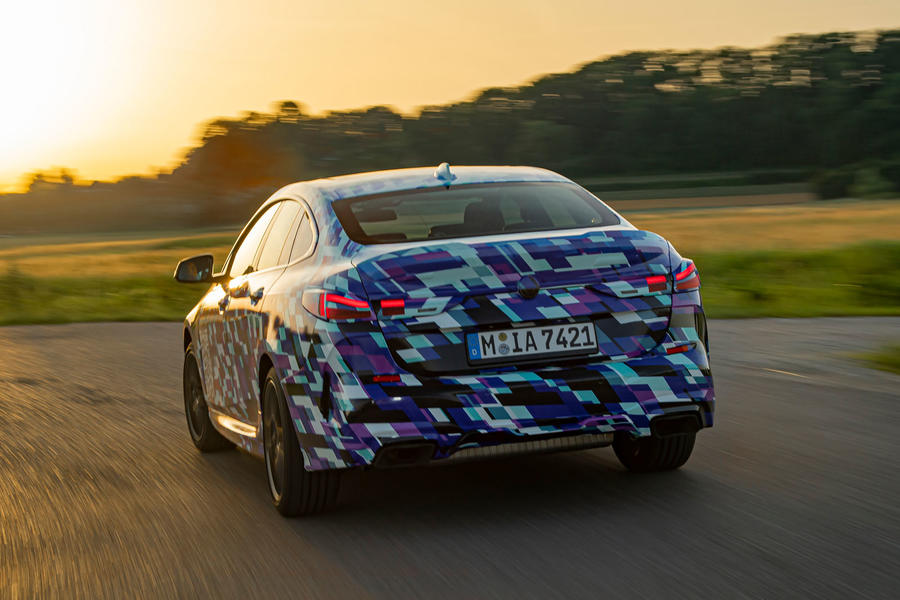 The 228i xDrive carries itself like its more powerful sibling in the twisties but it reaches the limits of grip and performance sooner. This is a case of buyers getting what they pay for. As a trade-off, its less aggressive suspension tuning delivers a more comfortable ride in everyday driving conditions.

The line-up will also include smaller engines, notably turbodiesels, and front-wheel drive variants. Florian Moser, the spokesperson for the 1 and 2 Series line, told us the FAAR platform is ready for electrification but it’s too early to tell what the future holds for the Gran Coupe’s powertrain portfolio.

Our brief drive behind the wheel of pre-production prototypes suggests BMW managed to make the 2 Series Gran Coupe usable and reasonably comfortable without muting its performance genes. It certainly doesn’t feel as lively as a 2 Series coupe but it behaves like a proper sports saloon.

What would set it apart...

from the arguably better-looking Merc A-Class sedan, is to have a rear hatch, like the Peugeot 508 has, instead of a bootlid. Will it?

from the arguably better-looking Merc A-Class sedan, is to have a rear hatch, like the Peugeot 508 has, instead of a bootlid. Will it?

Despite it having a fastback profile, and the 4er GC being a hatchback, it's a saloon.

Unlike the larger 4 Series Gran Coupe, BMW has opted to use a standard trunk instead of a liftback design, which has both positive and negative results. On the one hand, this means rear-seat passengers have more headroom than they otherwise might with hatchback hardware overhead. On the other hand, it means you don't get the surprisingly capacious dimensions of most liftback-style sedans. Then again, the A3 and A-Class also have conventional trunk openings, so I suppose this is par for the course.

Rear 3/4s remind me of the Hyundai i30 fastback hatch a little. Agree that they're missing a trick by not having a hatch, buyers like myself who have a family who want something a little  interesting (yes it's FWD, but so is the A3, Octavia VRS etc.) but kinda need the hatchback/fastback practicality.

A misstep by BMW

A misstep by BMW, imo.

Ok, so the company felt they had to make the new 1 series FWD for reasons of packaging and economies of scales of the FWD platform (sharing with Mini models). But why did they have to the same with the 2 series?

The new 3 series is now way too large to have the kind of agile handlng characterstics that the old E30/36/46 used to have. So, here was a chance for BMW, use the new 2 series, to make a smaller RWD saloon, with the agility and sharper handling of the old generations of 3 series and keep the BMW-ness bloodline, now that 3 has grown so large.

But what do they go and do instead? They make it FWD!

I'm guessing that they're

I'm guessing that they're going for economies of scale with their FWD platform shared across MINI, 1 series and now 2. They've looked at their competitors who seem to be selling well with FWD - A class, A3, even the Golf, and thought that people don't seem to mind their compact premium cars being front driven.

And the point of this is BMW

And the point of this is BMW ? . Do we and more to the point do you as company really need this car. It will just steal sales from you standard range of motors  Dim ot what. Plus its not great looking either. No wonder the rails are coming off the German car makers with Mercedes offering another profit warning  along with decreasing sales at BMW

I can’t understand where the need for such a vehicle in  BMW’s line has come from?, if you want more room, buy a three series?