EV is due to be unveiled later this year, and prototypes give us the best view yet of the production saloon
Open gallery
Close

Jaguar is launching a next-generation XJ in electric-only form later this year, and new spy shots give us a closer view of the production body.

The hotly anticipated Tesla Model S rival remains heavily camouflaged, but we can see that among its defining features are a heavily raked roofline, a short rear deck, all-new light designs and a lengthy rear overhang. The front end hasn't been captured in detail, but it looks like the new XJ will sport a similar trapezoidal grille design to its I-Pace stablemate, while its long bonnet and high waistline aren't unlike those of the outgoing XJ.

The XJ's EV platform calls for an extended wheelbase and wider track, for which the bodywork has been subtly adapted. The saloon will make use of an all-new platform architecture to accommodate the electric drivetrain. Dimensions remain under wraps, but Autocar understands that it's both wider and taller than the model it replaces. Technical details, including power and range, are also sparse at this stage. 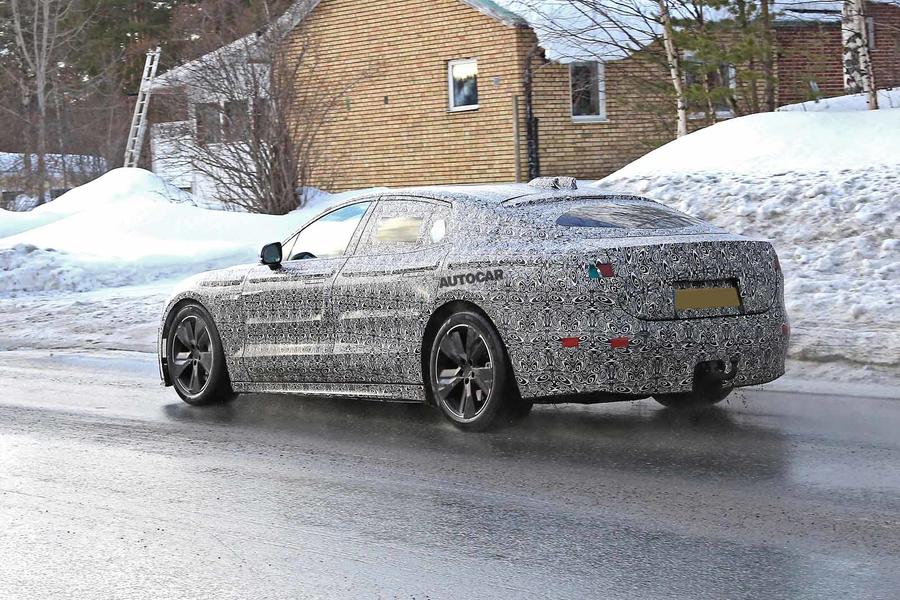 Jaguar's only official image of the next XJ was a teaser shot shown at last year's Frankfurt motor show. The brief image of the car's rear was shown during a video played at the firm's press conference, where sibling firm Land Rover revealed the new Defender.

It showed a classic saloon-style rear end, with thin rear lights that feed into a light strip running the full width of the bootlid. The model also features both the Jaguar logo and the company's name spelt out. 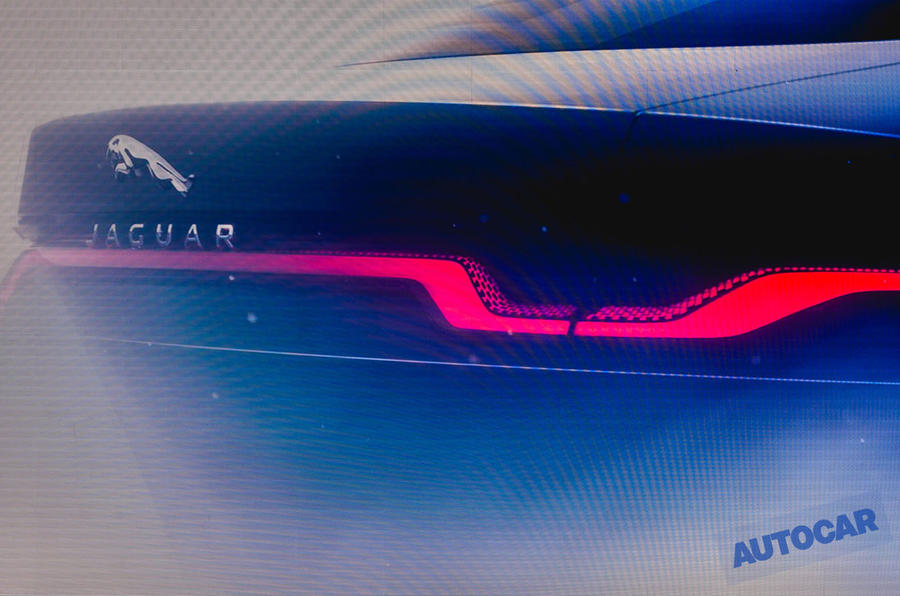 Jaguar design director Julian Thomson told Autocar last year the new XJ will look different from a traditional executive saloon. “Even saying F-segment long-wheelbase luxury saloon sounds awful. We don’t want to do that,” he said at the 2019 Frankfurt show. “We want to do a car that explores the best of Jaguar.

“We want to make it a beautiful car, with an engaging drive, a luxurious interior. We’ll do each of these our own way. We won’t be putting a tape measure on rivals to just match, match, match.

“We want to present something that challenges the norm, offer an alternative that makes it better and more engaging on all levels to own and to drive. That’s what we’re all about: the love of the car.”

Thomson said the next XJ’s design will “not be conventional”, adding: “I don’t think you can be. You don’t stick a poster on a wall of a German long-wheelbase luxury saloon, I don’t think. Jag’s positioning of cars is to lust after, to want and desire. We can absolutely do that and it’s a fabulous-looking thing, for sure.”

Thomson noted the packaging of an EV offers increased cabin space, but said that also presented challenges to designers.

He said: “We’re learning how to do the aesthetic. They’re heavier, need more structures for crash. The mass means you have normal building blocks in different places. These are things we’re learning.

“We feel we’ve had an advantage with I-Pace. We’ve learned a lot from it, not just with the technology but what we can do with space. EVs are serene and have a sense of calm, more of a spiritual quality. It’s as close as you can get to doing yoga in a car. We’ll bring that into XJ, bring a sense of cabin ambience that’s calm and refreshing.”

The firm confirmed last year that the XJ will be relaunched in 2020 as an electric model and will be built at its Castle Bromwich plant. Jaguar announced the news on the day that production of the current XJ ended at the factory.

The electric XJ will be the first electric model produced at the plant, but Jaguar Land Rover said it plans to manufacture “a range of new electrified vehicles” at the facility. 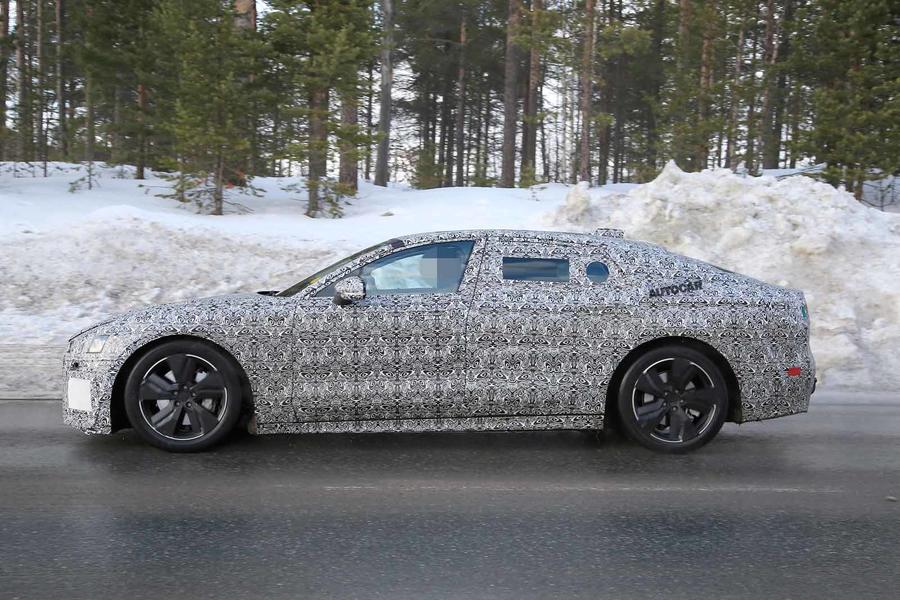 JLR’s current electrified models, the Range Rover and Range Rover Sport plug-in hybrids, are built at its Solihull plant, while the electric Jaguar I-Pace is produced by contract manufacturer Magna Steyr in Graz, Austria. Autocar first reported that the next-generation XJ would go electric in 2015.

The company said the new XJ will “build on the characteristics synonymous with its predecessors: beautiful design, intelligent performance and revered luxury”, adding that it will be built by the same “expert team of designers and product development specialists" responsible for delivering the I-Pace.

The previous announcement builds on JLR’s plan, confirmed earlier this year, to bring its battery and Electric Drive Unit assembly to the Midlands. The Battery Assembly Centre at Hams Hall, opening soon, will be capable of producing 150,000 units annually, while the Wolverhampton Engine Manufacturing Centre (EMC) is the home of JLR’s global EDU production.

Work on Castle Bromwich has begun in order to allow it to support JLR’s next-generation Modular Longitudinal Architecture (MLA), which can house diesel and petrol vehicles alongside electric and hybrid models.

JLR chief executive Ralf Speth said: “The future of mobility is electric and, as a visionary British company, we are committed to making our next generation of zero-emissions vehicles in the UK.

“We are co-locating our electric vehicle manufacture, Electronic Drive Units and battery assembly to create a powerhouse of electrification in the Midlands.”

Speth, when asked about the scale of the investment, said: "When you get into new architectures like we have, you're into the billions, spread over years to come."

JLR said that while the expansion of its electrified line-up will give customers a greater choice, “increased consumer take-up remains a challenge”.

It called on government and industry to work together to bring a Tesla-like giga-scale battery production facility to the UK to put the country at the “leading edge of electric mobility”.

Speth said: “Convenience and affordability are the two key enablers to drive the uptake of electric vehicles to the levels that we all need. Charging should be as easy as refuelling a conventional vehicle.

“Affordability will only be achieved if we make batteries here in the UK, close to vehicle production, to avoid the cost and safety risk of importing from abroad. The UK has the raw materials, scientific research in our universities and an existing supplier base to put the UK at the leading edge of mobility and job creation.”

The future of Jaguar sports cars​

The main things to get right, make it , build it better,and, make sure it's reliable.

Mmm, despite the camoflage, I

Yes, it looks a big at the back,and you can't really tell from image what it real shape because of the camouflage.

And the whole point of camouflage is??