BACK TO ALL NEWS
Currently reading: Alpina reveals details of new D3 S saloon and estate
UP NEXT
Lotus confirms new sports car, end of Elise, Exige and Evora in 2021

Alpina has revealed the all-new D3 S, bringing diesel power to its range of performance cars based on the G20-generation BMW 3 Series.

Diesel models traditionally sell well for Alpina, being richer in torque and lighter on fuel than their higher-powered petrol siblings, and the fundamental recipe appears unchanged for the German firm's latest model.

At the heart of the car is a modified version of the BMW 'B57' twin-turbocharged 3.0-litre straight six engine, which in the BMW M340d develops 335bhp and 516lb ft.

In the D3 S, it benefits from Alpina’s larger intercoolers, a broader suite of improved cooling systems and revised mapping to make 350bhp and 538lb ft – figures up 15bhp and 22lb ft on the previous D3 – and achieve WLTP combined fuel economy of 37.2mpg.

By comparison, the 462bhp petrol B3 manages 28.8mpg, and therein lies the core appeal of the diesel Alpina 3 Series – not least because, with the B3's total of 516lb ft, the diesel's torque advantage is now fairly slim.

Because this engine is originally engineered by BMW to use a 48-volt starter-generator, the D3 S is also the first Alpina to feature an electrified powertrain. Smoother stop-start is one benefit of the system, and this should enhance refinement, but the mild-hybrid set-up is also able to contribute small amounts of instant torque for improved throttle response.

There are changes for the eight-speed ZF torque-converter automatic gearbox, although only in the form of software revisions to help it better withstand sustained high loads – for example while driving on the autobahn, where the new car will hit 170mph in saloon form and 168mph as the estate-bodied Touring.

Unsurprisingly, the D3 S is quicker all-out than its M340d cousin, which is limited to 155mph, although their 0-62mph times are identical, at 4.6sec for the saloon and 4.8sec for the estate.

Substantial work has also gone into the car’s four-wheel-drive chassis, which retains BMW's clutch-based xDrive torque-split between the axle but uses a new limited-slip differential at the rear and the same adaptive Alpina Sport suspension fitted to the B3.

There are also brand-specific Eibach springs, and the damper modes are tuned to deliver more of Alpina’s trademark ride quality. Additional negative camber for the front wheels should improve stability and steering feel, while forged wheels that collectively lessen unsprung mass by 14kg should improve steering response.

The other major chassis upgrade comes in the form of the brakes, which are carried over directly from the 205mph B5 Biturbo. In addition, lightweight, drilled composite brake discs are available.

New Alpina B3 shown in saloon form at Tokyo 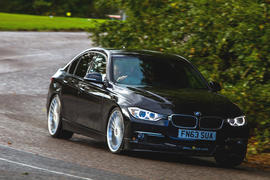 There was a time when I thought they'd shy away from producing another diesel model but despite all the unwarranted negativity, there is still a market for a modern clean diesel.
Anyone who has driven an Alpina and understands the brand, knows that these cars a more than just a chip tune and badge - they're properly engineered, with well judged suspension that breathes with the road and beautifully trimmed interiors (esp with their wonderfully rich Lavalina leather).

@Sundym: The previous 335d based Alpina D3 Allrad (X-drive) was available in Europe but couldn't be converted to RHD, due to the position of the steering column interfering with the front axle - which is why RHD markets ended up with just rear drive.

IMHO an Alpina B3/D3 estate is a far better option than the latest RS4 and on a cross country run is dynamically better than any SUV by a country mile.

Pathetic - its like they couldnt be bothered to even try - a simple remap will give a 340d approx 385 horses and around 600 lbs/ft, why would you spend all that extra on an Alpina ?

A better interior?, looks the money compared to the BMW?, you don't see many?, I've only seen one or two, and one was in a BMW Garage, I had a look inside, BMW still aren't as well trimmed as the Alpina.