BACK TO ALL NEWS
Currently reading: Alpina version of BMW 8 Series Gran Coupe seen testing
UP NEXT
New Audi S3 Sportback and Saloon arrive with 306bhp

Alpina’s flurry of new model launches looks set to continue, with prototypes of its version of the new BMW 8 Series Gran Coupé having emerged.

It’s the latest of a number of test mules seen in the last few days, including a new 3 Series-based B3 and the brand’s take on the new X7 SUV. While the former was expected, the two new models will take Alpina’s range of BMW-derived models to eight.

As with the B3 and XB7, this 8 Series test car wears the tell-tale addenda of an Alpina model. These include bespoke bumper designs, the trademark multi-spoke wheel design and unique badging. It’s likely, although not yet confirmed, that the same treatment will be applied to the two-door coupé and cabriolet 8 Series models in due course.

Likely to be called the B8, the new Alpina four-door will make use of the M850i’s twin-turbocharged 4.4-litre petrol V8 rather than the full-fat M8's version. However, it will be tuned to a power output of 600bhp, as is traditional. Using the identically powered B5 for comparison, that would translate to a 0-62mph time of well below four seconds and a top speed breaking the 200mph barrier (Alpina doesn’t use electronic speed limiters).

We can also expect Alpina’s highly acclaimed chassis engineers to work their magic on the 8 Series, giving it a unique suspension tune that prioritises comfort just as much as handling. The interior, too, will receive upholstery upgrades as part of the usual makeover.

No details of the B8's launch have been released yet, but given the M8 is due to go on sale in the next couple of months, we expect a debut in the first half of 2020 at the latest. 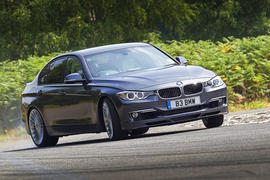 Have to assume it’ll be dearer than the three series Alpina, what a beast of a Car though!