The forthcoming new Vauxhall Astra will echo the bold styling direction taken by the Mokka SUV rather than adopt a more conventional look, as confirmed by our first sighting of a prototype.

Spotted testing in Germany (in European-spec Opel guise), this boldly camouflaged prototype gives clues as to what to expect from the Astra's reinvention. As previously reported, the front end will follow the new Mokka and Crossland in receiving Vauxhall's distinctive new Vizor design and slim headlights, while the rear end looks to be modelled on the new Corsa.

The sighting comes just days after we had our first look at an uncamouflaged prototype for the Peugeot 308, with which the Astra shares its EMP2 platform.

It hasn't yet been confirmed whether Vauxhall will follow Peugeot's lead in offering the family hatchback with a choice of petrol, diesel and plug-in hybrid powertrains, but the lightning bolt on the side of this prototype suggests electricity plays some part in its propulsion.

The front grille, however, has been left uncovered to allow air to pass through, suggesting that this is not the first indication of a fully electric Astra variant. 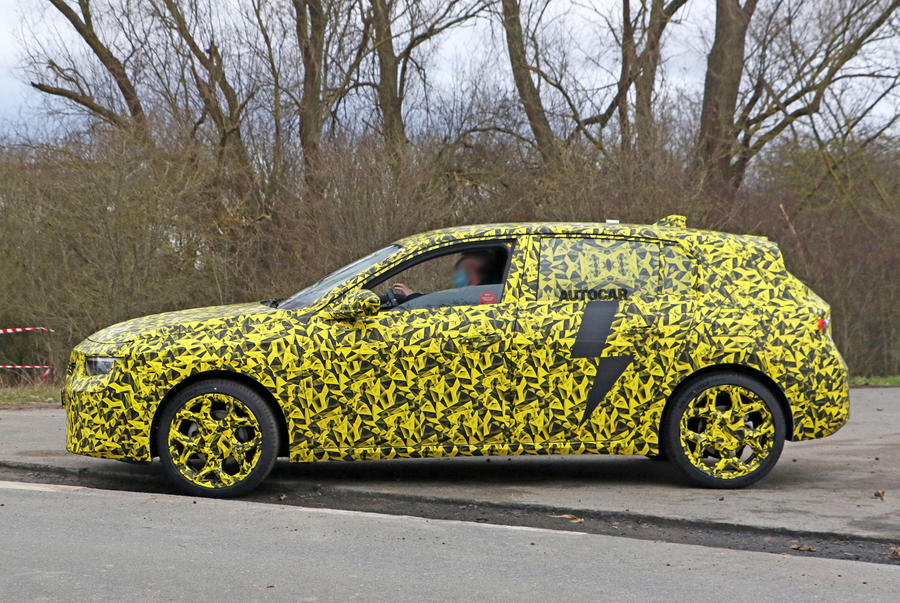 Although it’s unlikely that an electric version of the Astra will be offered, two plug-in hybrid variants (using the same petrol-electric powertrain as the Grandland X) are expected: a front-driven car and a more powerful (296bhp) four-wheel drive version. The latter is likely to wear a VXR badge as part of Vauxhall’s plan to electrify its sporting brand.

“What [the new Mokka] is to this segment, that car [the Astra] will be to its segment,” Opel chief designer Mark Adams told Autocar last year. “The boldness and the key elements [of the Mokka] will be coming through. We’re not going to take the same design and morph it into a different shape. We’ll take the same ingredients and develop it around them.”

Despite Vauxhall models sharing their underpinnings with cars from Peugeot, Citroën and DS, Adams claims that he’s able to give Vauxhall’s cars a distinctive look and feel of their own under the new management.

“As soon as we became part of the PSA Group, I had the opportunity to just think about what we want the brand to be,” he said. “That was the brief Carlos [Tavares] gave to me: ‘Right, you can do what you want to do for the brand.’ We had the freedom to take it to where we wanted to go. So we came up with this whole philosophy and the look of the car by thinking about how we want to distil the values of the brand down to key elements.”

The current Vauxhall Astra sits alongside the Insignia as the last Vauxhall models to feature no PSA influence, having been conceived under General Motors management. It's built at Ellesmere Port in the north of England, but this sighting comes amid uncertainty over the future of Vauxhall's UK production output; PSA boss Carlos Tavares has previously suggested that the government's 2030 combustion ban threatens the ongoing viability of the site, and ongoing talks between Vauxhall and the UK government have been described as "productive" but not yet conclusive.

The Opel Astra, spotted here, is built in Rüsselsheim, Germany, while the closely related 308 will be built at Peugeot's Mulhouse and Sochaux plants in France.

The Astra doesn't look that different from the previous-generation model that launched twelve years ago. Surely it's time for a change? The European sales figures aren't great so something needs to change! Maybe Stellantis can make a positive change like Ford did when it moved from the Escort to the Focus.

I don't think it is that good looking a car. It is innofensive at best.

VW sells more Golfs every year than Vauxhall/Opel sell of their entire lineup. The GM era models have been mostly misses, especially the interiors. I personally think the PSA architecture will be an improvement, I just wished PSA had a new engine family. The 1.6T is getting long in the tooth.

FastRenaultFan 12 March 2021
No don't do it Opel/Vauxhall. You have the best looking car in its class at the moment. A car that makes the VW Golf look decades old but if you do this Opel/ Vauxhall then you will just be as staid and boring as the most boring and overrated car in its class the VW Golf.
MkVII Golf GTI 14 March 2021

FastRenaultFan 12 March 2021
No don't do it Opel/Vauxhall. You have the best looking car in its class at the moment. A car that makes the VW Golf look decades old but if you do this Opel/ Vauxhall then you will just be as staid and boring as the most boring and overrated car in its class the VW Golf.
View all comments (12)