BACK TO ALL NEWS
Currently reading: 2021 Los Angeles motor show: full report and gallery
UP NEXT
Volkswagen ID Buzz to kick-start wave of enthusiast-oriented EVs

California, home of some of the strictest air quality emission standards in the world and (until recently) Tesla, has long been at the vanguard of electric cars. But nobody ever really seemed to tell the Los Angeles motor show, typically the location for the launch of the biggest SUVs with the biggest engines.

Perhaps it was the two-year pause of the pandemic that made for a much stronger shift in tone at the motor show here in 2021, yet this felt a very different LA show from those we typically encounter. A quieter one, understandably, with global travel still tricky and the semiconductor (chip) crisis squeezing budgets, but altogether a much more progressive one.

The cars remained big and SUV shaped, but the propulsion method has changed, and the innovation and stories behind the cars were as fascinating as they’ve ever been.

Chief among them were the Hyundai Seven and Kia EV9 concepts, both large electric SUVs that preview upcoming production models and both concepts oozing originality, particularly with their interiors. And we’ve not seen an angle of any car in a long time as fabulously innovative and different as looking square on at the back of the Hyundai Seven.

Originality is a word that sticks with the Fisker Ocean. This latest version of Fisker is the second time ex-Aston Martin designer Henrik Fisker has had a go at establishing a car company. It feels different now from the Karma a decade ago, for the Ocean is pitched right in the heart of the emerging key electric car battleground of the compact premium SUV.

The Ocean looks great, has impressive tech credentials, is priced right and has a key point of difference, with its claim of being the world’s most sustainable vehicle by being packed with recycled materials. So much of the Ocean feels on the money, and in the zeitgeist.

That star trio were ably supported by the Toyota bZ4X, a word soup of a name, but hugely significant as Toyota’s first dedicated electric car. It hasn’t quite got the visual character of other recent Toyotas like the C-HR, but such a car from the world’s biggest car maker demands attention.

The Toyota-Subaru link-up is also in play here, with the bZ4X spawning a sibling, the Subaru Solterra, unveiled in a curious press conference that boasted how charitable Subaru had been in the pandemic in dishing out more aid to charities as if it had just topped a reliability survey. It was all a bit tone deaf, however laudable the work itself had been.

It might be built in the Midlands, but the adopted home of the Range Rover is California and the upmarket suburbs of Los Angeles, so it was a fitting place for the fifth-generation model to make its debut on the world stage. It’s a car where the pictures don’t do the quality of the execution justice, so seeing the fantastic design in the metal was a real show highlight. And it was the one major debut to get that V8 engine…

So the LA show hadn’t totally transformed into the new world, then, further emphasised by the debut of a sports car from the old world: the Porsche Cayman GT4 RS. Its spec is as special as they come, and greatness surely awaits the latest model from Porsche’s GT division, which can do no wrong.

And that was it, really. Quality over quantity is how the 2021 LA motor show will be remembered, a show that in truth did little to alleviate concerns over even the medium-term future of motor shows with dwindling manufacturer attendances. That aside, what it does show is that post-pandemic, the creativity of the automotive industry is as alive as it’s ever been, and some special, innovative cars await in the years to come. 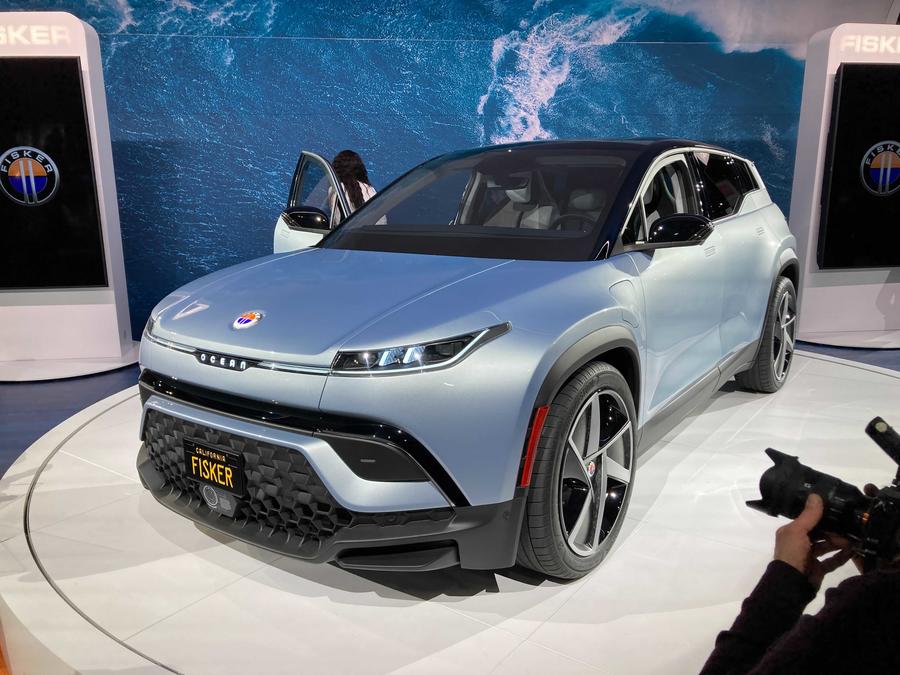 The long-awaited Fisker Ocean electric SUV has made its production-specification debut in LA ahead of its planned launch in 2022. The Ocean – which will be built in Austria – is one of five Fisker models expected by 2025, and plans are in place for the model to head to Britain in the second quarter of 2023. Fisker has promised a range of up to 350 miles and claims the Ocean is “the world’s most sustainable vehicle”. 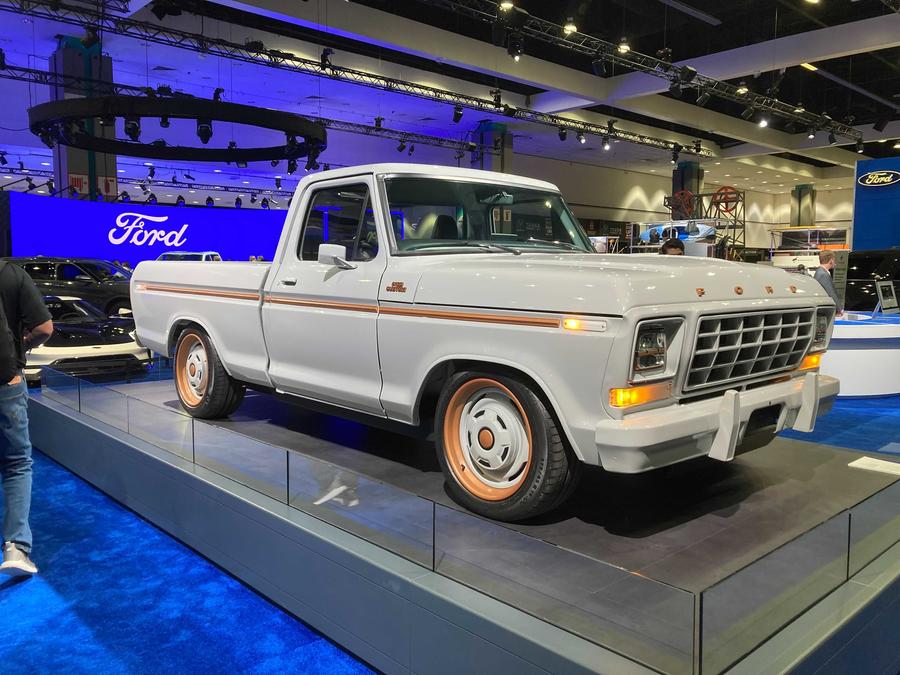 Looks quaint enough, doesn't it? But poke around this '70s workhorse and you'll find that all is not as it seems... To showcase its newly available EV crate motors, Ford has ripped out the F-100's old petrol powerplant and replaced it with a pair of electric motors borrowed from the Mustang Mach-E for a combined output of 480bhp. Good for a few raised eyebrows at the local drag strip, we'd wager. 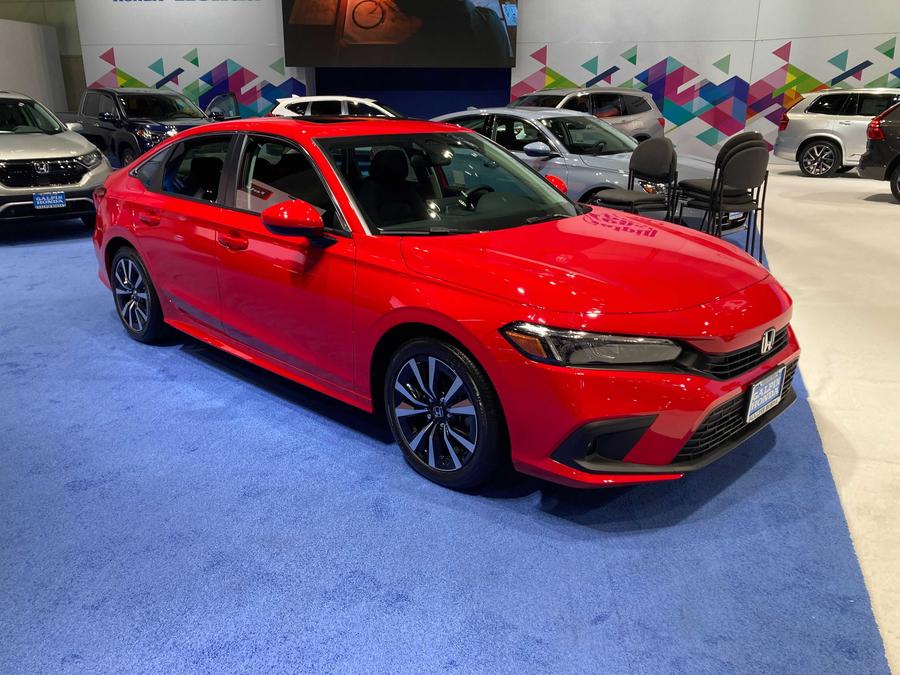 We've still got a few months to wait until we can get the new Civic out on the road, but LA gives us our first look. Just imagine it without the amber indicators. And the non-electrified drivetrain, for that matter. The Civic is the final model in Honda's mainstream European product line-up to go electrified only, so it will come here with the same 1.5-litre petrol-electric set-up found in the Jazz and new HR-V. 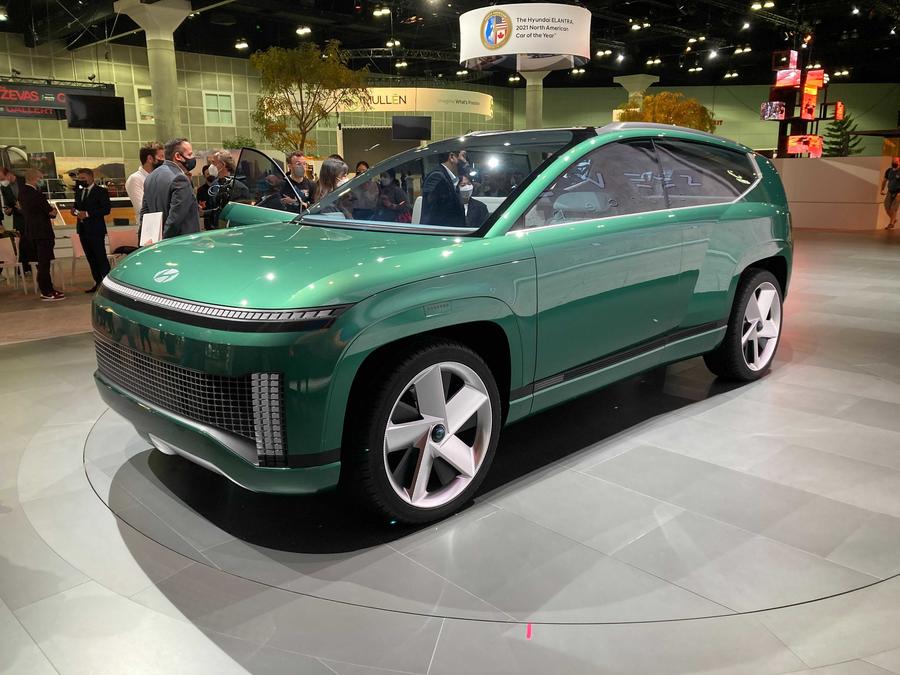 The Hyundai Seven concept serves to preview the Ioniq 7 SUV, which will join the the Ioniq 5 hatchback and Ioniq 6 saloon in the marque's new family of bespoke EVs. The Tesla Model X rival features a unique design that, Hyundai says, “dares to diverge” from industry traditions and is expected to play a critical role in the brand’s success in the US and China. It’s based on the same E-GMP platform as the Ioniq 5, but looks nothing like its Ioniq 5 and upcoming Ioniq 6 range-mates. It's good to be different, reckons Hyundai. 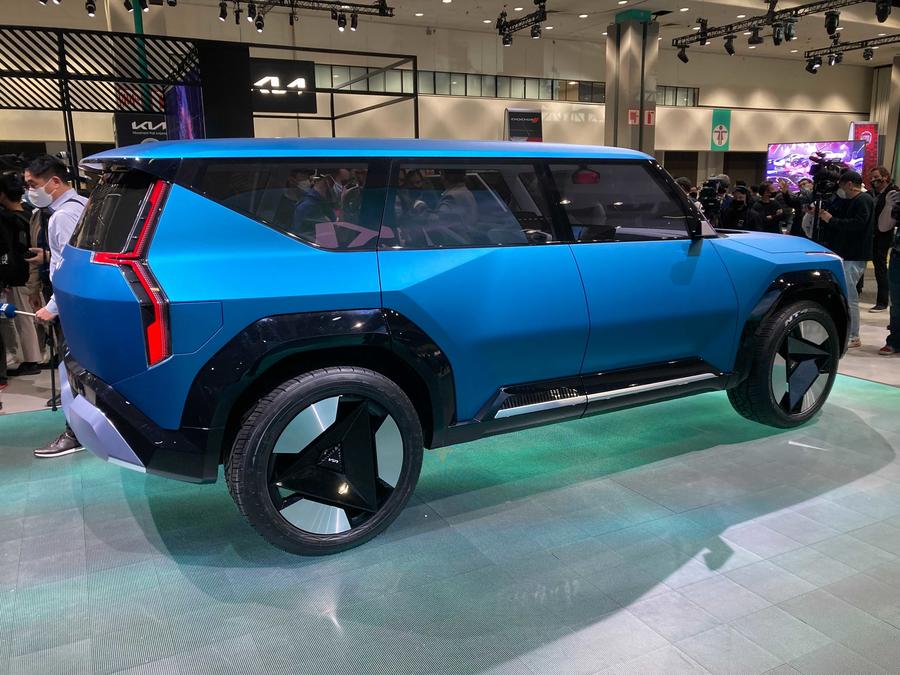 Kia's new EV9 concept arrives in the wake of the firm's announcement that it will go all-electric by 2035. It features a nature-inspired design with several recycled materials used in its construction, and a boxy body with thin, uniquely shaped headlights and an almost-rectangular steering wheel. It has been described as an important milestone in Kia’s sustainability strategy and will arrive in production form as the flagship of its bespoke EV family in 2024. 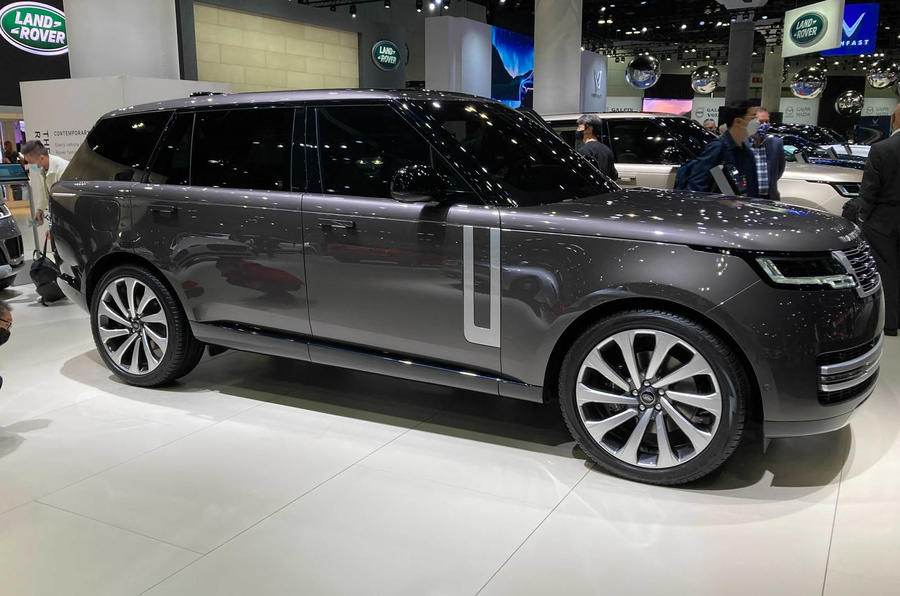 The most important new car to come out of the UK this year? Land Rover has taken its new Range Rover flagship stateside for its first motor show outing - which makes sense, seeing as it sells like hot cakes in the US. Beneath the subtly evolved styling is a completely different beast from the current Range Rover, which has been on sale since 2012. Long-range PHEVs, a snarling BMW V8 and the promise of a pure-electric version in only three years' time? This isn't just the future of Land Rover: it once again sets the tone for all luxury SUVs to come. 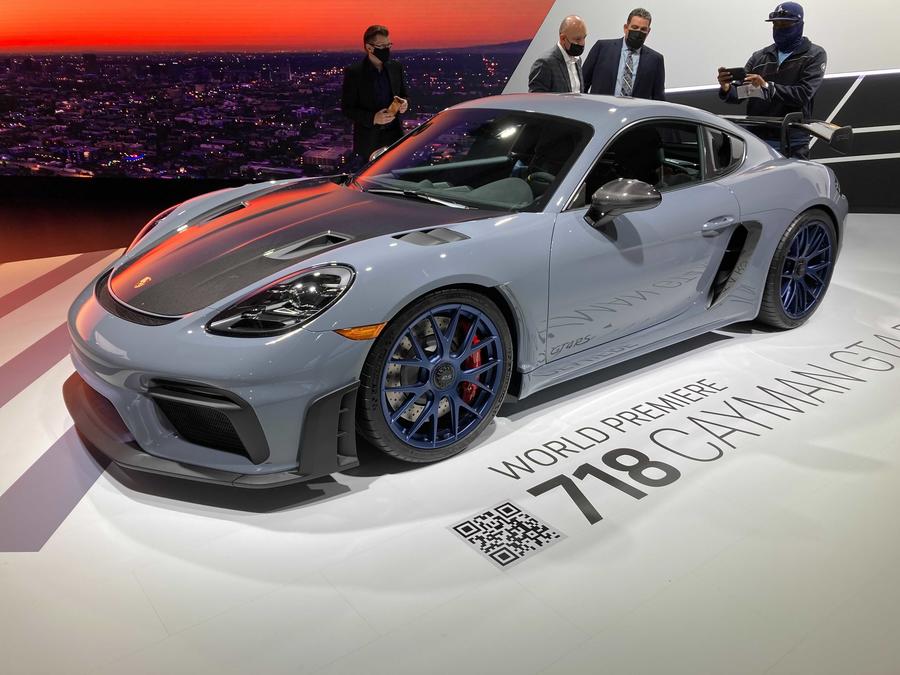 The 718 Cayman coupé appears in its hottest guise in LA. The new GT4 RS brings a lower kerb weight, increased downforce and uprated power compared with the existing GT4, promising even quicker lap times and enhanced driving thrills. The best part, though, is that the rear windows have been replaced by cooling vents right behind the front seats, which means it should sound absolutely epic from the driver's seat at full chat. 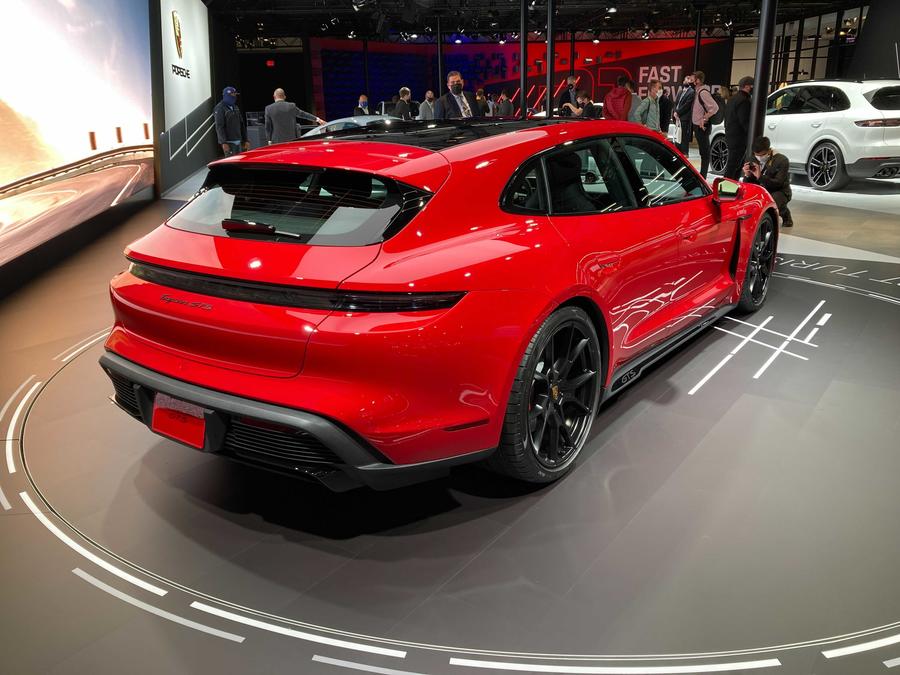 Two new Porsche Taycan variants are on show in LA. One, the long-awaited GTS, will be positioned between the existing 4S and Turbo models with 590bhp and a 312-mile range. The other is the Sport Turismo estate, similar to the existing Cross Turismo but with a lower-slung, less off-road-oriented body and the 4x4-inspired body cladding removed. Put the two together and (to use its full name) you get the Porsche Taycan Sport Turismo Gran Turismo Sport - got that? 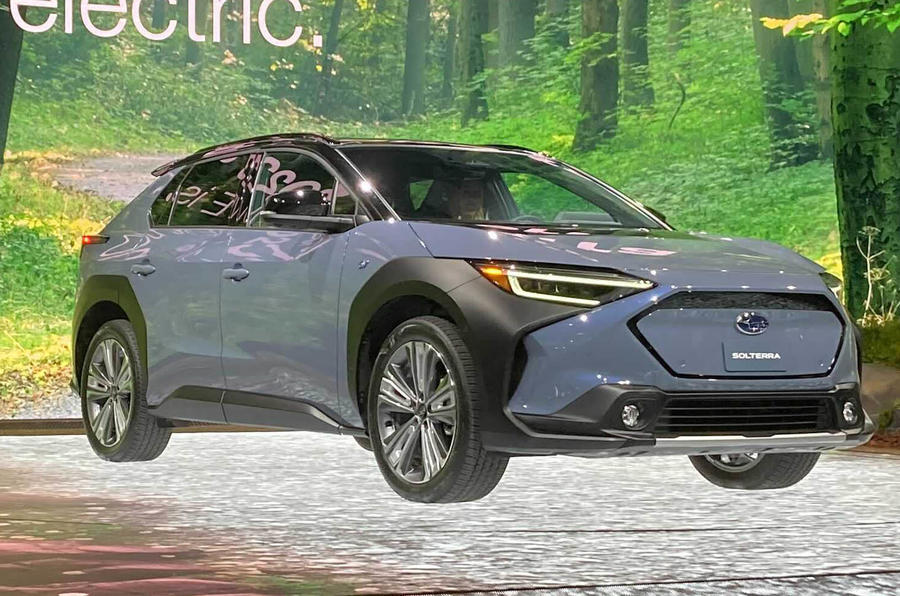 Subaru won't stop being Subaru as it transitions to electrification. That's the message at the unveiling of the new Solterra - a futuristically styled family SUV with a range of 280 miles and a promise of genuine off-road ability. There's no word yet on a WRX STI variant, but we live in hope. 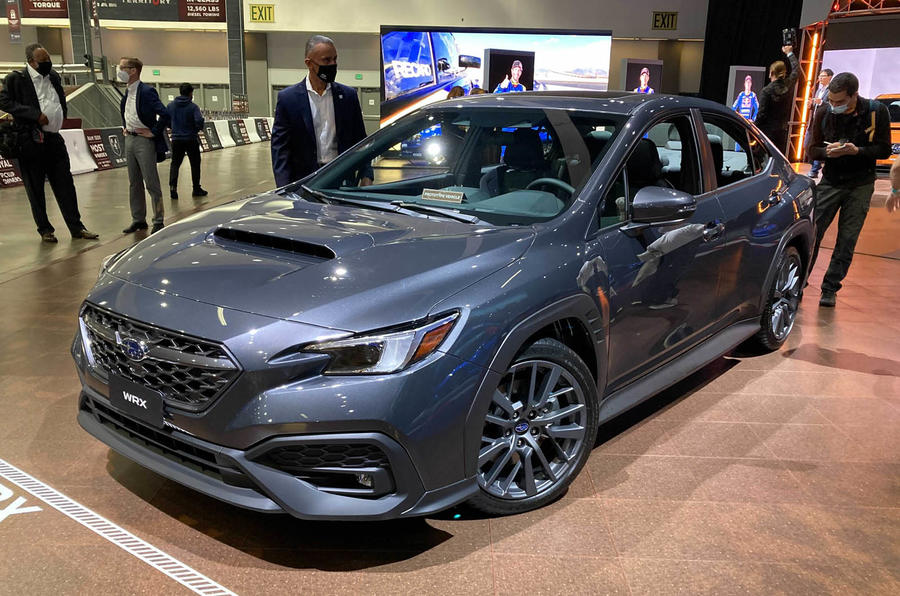 The famed WRX name is returning for a fifth-generation car on an all-new platform, with an upgraded chassis and an overhauled interior. It retains a turbocharged boxer engine and will once again be marketed separately from the Impreza on which it’s based. Its 2.4-litre four-cylinder unit produces 271bhp and 258lb ft of torque, and a choice of a six-speed manual or a new automatic Subaru Performance Transmission (SPT) will be available. The new auto is said to offer 30% faster upshifts and 50% faster downshifts.

But it won't be available in the UK... 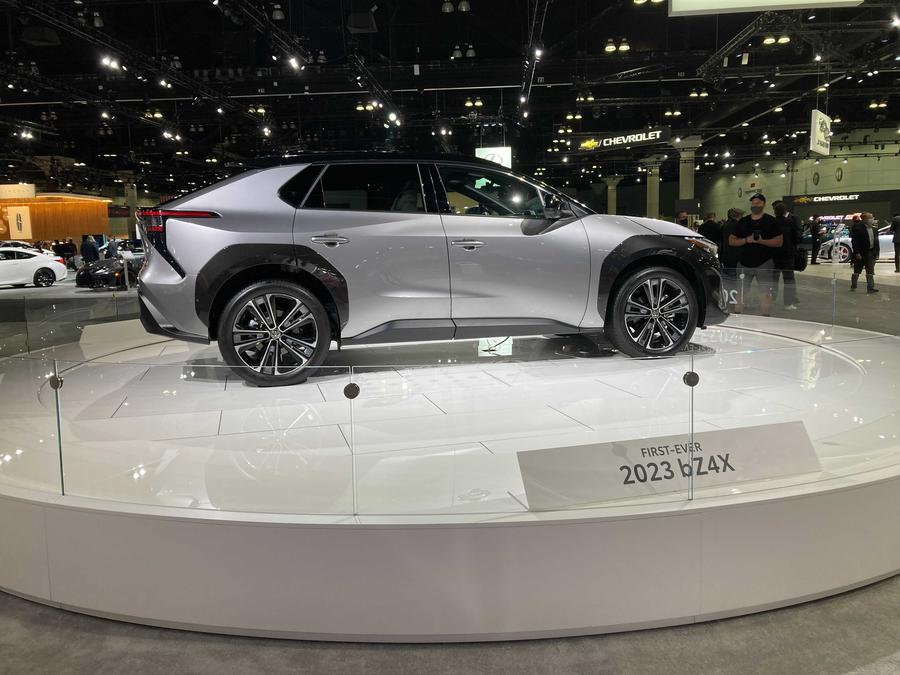 Like the look of the Solterra? You'll like this one, then: the bZ4X is the first production EV from Toyota, and shares a platform with its near-identical Subaru cousin. Two- and four-wheel-drive variants will be available, with up to 214bhp and a range of 280 miles, but Toyota is just as keen to point out the SUV's consistent performance in all temperatures – a common pitfall of EVs – and yoke-style steering device, which is wirelessly connected to the front wheels.

Is that the new Civic or a retro Honda Accord from the early 90's ?