The Seven concept is an outlandish and futuristic preview of Hyundai's third bespoke electric car, which will go on sale in 2024 as a large, long-range rival to Volvo's upcoming XC90 replacement.

The Korean marque labels the concept as a "category-bending" electric SUV, highlighting its aerodynamically optimised styling and extended wheelbase as departures from the design norms of conventionally fuelled contemporaries. Some of its more radical design cues will be toned down for production - but the recently launched Ioniq 5 remains largely faithful to 2019's straight-edged 45 concept and the Ioniq 6 looks to be heading into production with minimal alterations from the Prophecy - so expect the showroom-ready Ioniq 7 to look a lot like this.

Autocar reported last year that Hyundai planned for its first three bespoke EVs to have highly individualised styling, and indeed the Seven concept adopts a radically different silhouette – "divergent from a typical SUV," according to the firm – and a raft of new design cues to mark it out from both its range-mates and its fuel-burning forebears.

An obvious visual link, though, is the 'Parametric Pixel' design for the front and rear light clusters – which is a motif common to each of Hyundai's bespoke EVs, including its Heritage Series reborn classics – and is said to blend elements of "digital and analogue styles" and highlight the rigorous approach of its designers, who "considered every aspect of Seven's design, down to a single pixel". 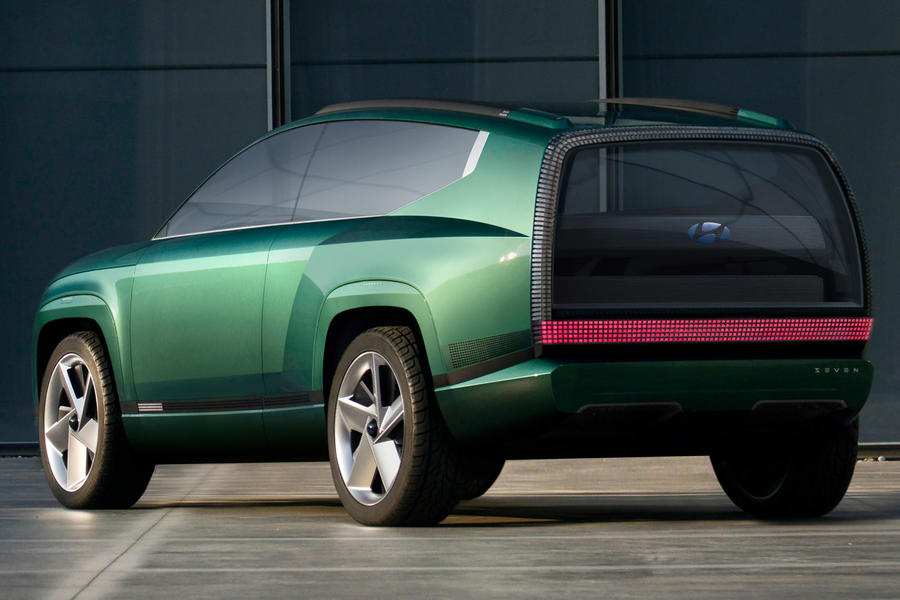 Sitting atop Hyundai's EV-specific E-GMP architecture, the Seven benefits from a flat floor, short overhangs and bonnet, and a 3200mm-long wheelbase - roughly as long as that of even the largest version of the Mercedes-Benz S-Class – all features that allow for a much more spacious cabin environment than offered by Hyundai's existing SUVs.

It is in this respect that the production-spec Ioniq 7 will differ most obviously from the concept, which ditches a conventional three-row seating layout in favour of a more "fluid" format comprising a pair of movable, swivelling armchairs – complete with footrests – and a curved corner sofa-style arrangement at the back of the cabin. It's all part of what Hyundai describes as its "future vision of autonomous mobility", which previews how advances in self-driving capability could influence the interiors of upcoming models.

A retractable joystick replaces the steering wheel, for example, and in place of a conventional dashboard, a sleek digital control panel spans the width of the cabin – an evolution of the set-up shown in the Prophecy concept – while a huge OLED screen in the ceiling serves as a sort of virtual sunroof with customisable displays.

With the front seats turned rearwards, the Seven is transformed into a mobile lounge, with ambient lighting supplied by distinctive tube-shaped devices in the door panels, an inbuilt fridge and even dedicated shoe care compartments. Which of these, if any, will make it to production remains unclear, but Hyundai design boss SangYup Lee said the Seven "paves the way forward for what an SUV needs to become in the EV era", suggesting a similar ethos will be applied to production cars. 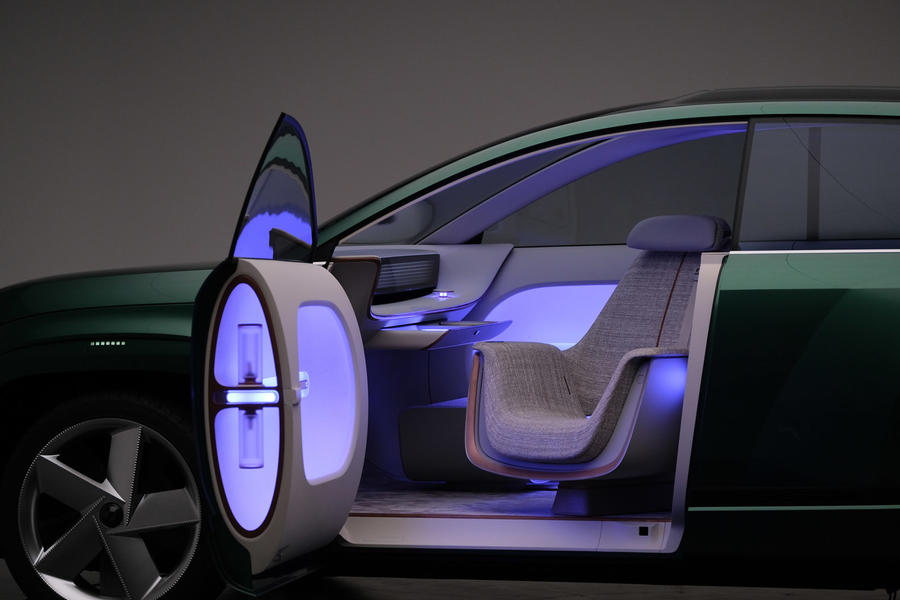 Also representative of Hyundai's wider approach to sustainability is the 'bio-paint' exterior finish, recycled interior materials and focus on hygiene. For instance, an aircraft-inspired airflow system operates either horizontally or vertically to reduce cross-contamination between passengers, and once the vehicle is empty, UV lights run over all surfaces to eradicate bacteria and viruses.

The Ioniq 7 will ultimately be technically similar – in terms of its drivetrain – to the Ioniq 5 and the Kia EV6, the first production cars to use the E-GMP platform. Its 800V charging functionality will make it compatible with the fastest EV chargers on the market – the Seven has a claimed 20-minute charge time from 10% to 80% capacity - and Hyundai is targeting a range of more than 300 miles, which if carried over to the Ioniq 7 would make it a close match for its rivals.

Could the Ioniq 7 replace the Santa Fe?

The Seven’s size and shape – and the timing of its unveiling in concept form – could hint at its destiny as an eventual successor to today’s Santa Fe, which is expected to bow out in 2024 or 2025. Its reveal in the US, where Santa Fe sales far outstrip those of Europe, gives another clue to its future role in the brand’s line-up.

Hyundai has yet to directly replace any of its combustion-engined models with a pure-electric alternative – the Kona and Ioniq EVs are sold alongside petrol and hybrid variants – and this could well be the case for the Ioniq 7, given the brand will still sell combustion cars in Europe until 2035.

Slightly odd colour for a hearse, but I like it.

FastRenaultFan 18 November 2021
Not very aerodynamic looking or pedestrian friendly either.
Is it a five door and a three door concept? It looks better as a 5 door from the side view anyway. That rear is terrible do and the bumper lol looks like something from an American car in the 80s. Not very practical looking either with that bar going across the inside. I take it it has no boot either.
soldi 18 November 2021