BACK TO ALL NEWS
Currently reading: 2021 Hyundai i20 N: hot hatch drops disguise in new testing shots
UP NEXT
Grand touring: 1000 miles across Europe in the new Alpina B3

Hyundai's N performance line-up will expand in the coming months with two new models: the Kona N crossover and the long-awaited i20 N hot hatch.

Officially previewed in winter testing last month, the Ford Fiesta ST challenger can now be seen without restrictive black cladding to disguise the shape. It's being put through its paces at the Nürburgring, wearing the production bodywork of the new-generation i20 (revealed earlier this year) on which it is based.

The test hack our snappers have caught at the German circuit is wearing the trademark features of a performance model, including a wheel design inspired by the bigger i30 N hiding red-painted brake calipers, revised front and rear bumpers and intakes and a large single exhaust outlet mounted in a diffuser-style lower trim. A prominent roof spoiler is also visible. 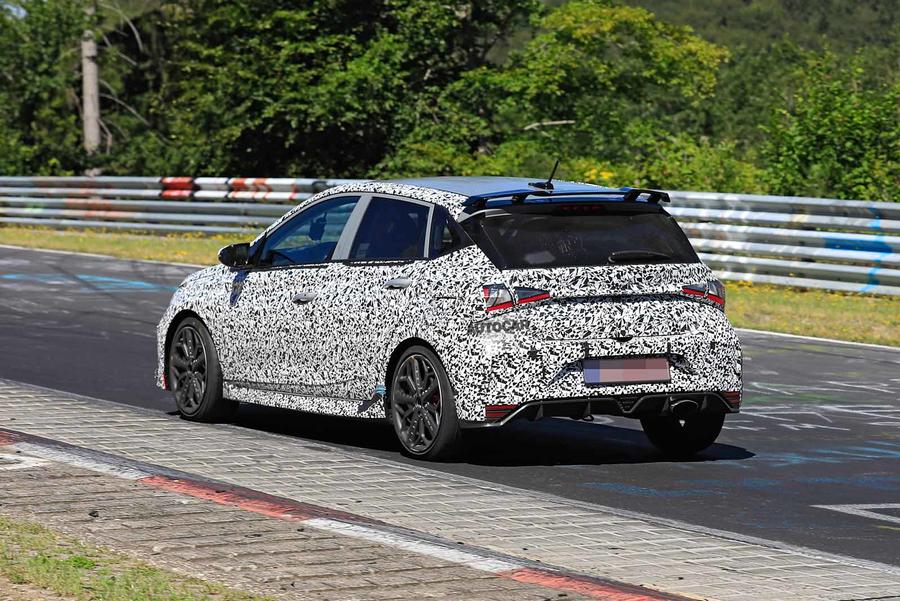 Powertrain details for the i20 N remain scarce. We know it is powered by a four-cylinder turbocharged petrol engine from the official preview video, but it's unclear if it makes use of a detuned version of the i30 N's 2.0-litre turbo unit. Another likely candidate is the Korean brand's widely used 1.6 T-GDi petrol engine. This offers 174bhp in the flagship Kona but would need to be boosted to around 200bhp in order to ensure its competitiveness against rivals such as the Fiesta ST and Volkswagen Polo GTI.

As with the i30 N, the hot supermini will continue to be developed at Hyundai's Nürburgring test facility. Expect a bespoke chassis setup with stiffer springs and dampers, as well as some of the adjustable driving modes offered in its bigger sibling.

Autocar understands that both the Kona N and i20 N will go on sale early next year and are likely to be officially revealed before 2020 is out.

Hyundai N division 'halo' car could be AWD and hybrid

Hopefully the N treatment does something about those awful back lights on the new model.....jeez!

Hey, just as well they aren't offering a 3 door, you can't afford it anyway.

I don't think there are many large manufacturers where the top brass still have real enthusiasm for cars, in the same way that Toyota does, but more importantly allows themself to indulge this enthusiasm.

Seen in production body? I

Seen in production body? I had hoped for a little more of a reveal than this!

Nearly all hot hatch type cars look alike, must be hard to come up with something thar totally different and build it to a price.

Give this bland box a pass and go for the superior Yaris GR. Also Why has autocar omitted any mention of the Yaris GR in the article which makes this hyundai look lukewarm? Be more subjective instead of posting a thinly veiled advertisement presented as a news story copy and pasting hyunadis PR