BACK TO ALL NEWS
Currently reading: First drive: 2020 Hyundai i20 MHEV prototype
UP NEXT
Tesla to expand select UK Superchargers to other electric vehicles

Say hello to the new, third-generation Hyundai i20, driven here in the UK for the first time in not-quite-finished pre-production guise.

A definitive Hyundai first drive report will have to wait until we can get our hands on an example with a properly finished interior, production-spec noise, vibration and harshness (NVH) measures and a correctly calibrated gearbox. But for now, this left-hooker should give us a reasonably accurate idea of what we can expect from the new i20 when it officially goes on sale later this year.

Stylistically, the latest i20 represents a fairly dramatic departure 2021 from its 2015-2020 Hyundai i20 predecessor. Whereas the previous one was a handsome but relatively plain-looking thing to behold, this latest version is much more radical. Hyundai’s rather curiously titled ‘Sensuous Sportiness’ design language is to blame here, introducing sharper surface treatments, a lower roofline and a wider body to endow this new i20 with a rather more aggressive stance than it had before.

It’s longer now too, both nose-to-tail and between the wheels, which should bode well for passenger and luggage space. Either way, the foundation for the forthcoming Hyundai i20 N hot hatch certainly looks to be a pretty strong one.

Until that performance model arrives, the i20 engine line-up is pretty run of the mill. The UK offering hasn’t been finalised yet, but everything revolves around two different engines and four gearbox choices. An 83bhp 1.2-litre four-cylinder petrol kicks proceedings off at the entry-point to the range and is paired with a five-speed manual 'box. Then there’s the 99bhp 1.0-litre turbocharged three-pot, which is available with either a seven-speed dual-clutch automatic or a six-speed manual.

That 99bhp 1.0-litre engine is also available with a 48-volt mild-hybrid system as an option, and there’s a 118bhp version too. The 118bhp unit has the 48v system as standard, and is the car we’re testing here. It uses a seven-speed dual-clutch ‘box to drive the front wheels, although Hyundai’s newly-developed six-speed ‘Intelligent Manual’ is also available. The South Korean manufacturer hasn’t confirmed how this affects things like system power and torque outputs, but a 3-4% reduction in fuel consumption and CO2 emissions is a byproduct of having it fitted. 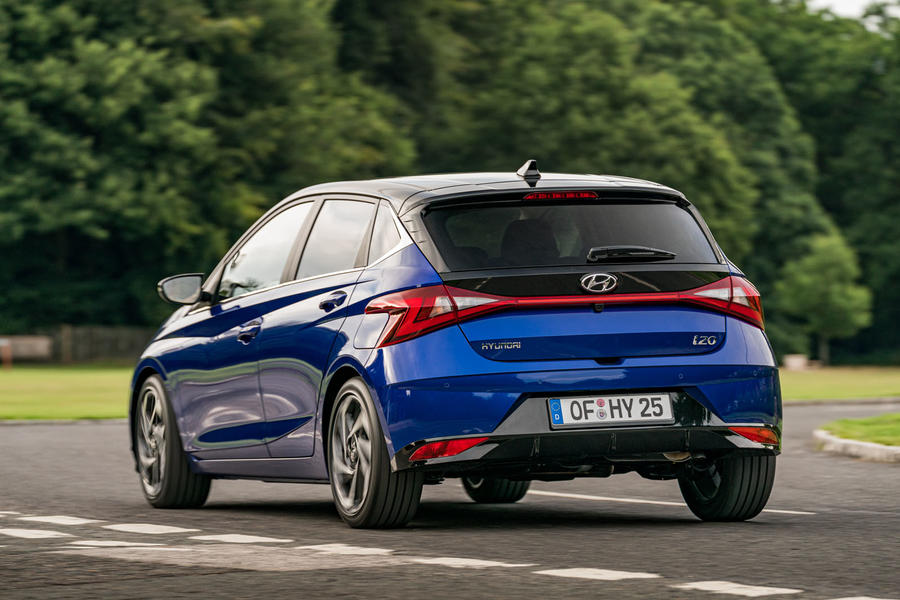 Elsewhere, the i20 is pretty standard supermini fare. There are a couple of MacPherson struts up front, while a torsion beam stretches itself across the rear axle.

Although it was pretty apparent that this i20 wasn’t quite finished, it still proved likeable on a short drive on the roads around High Wycombe. Despite the really quite noticeable levels of audible suspension thump and pitter-patter being transmitted into the cabin, the i20 rides in a largely respectable fashion for a car of its size.

Body control over undulations is good, and while sharper impacts certainly make themselves felt (and, at present, heard), it never feels overly agitated or upset on particularly coarse stretches of road. A drive in the finished car will prove just how good (or bad) it really is, but if things are only going to improve from this point, it seems there’s little to be too concerned about.

It changes direction with a certain keenness, too, if not quite as much zest as the Ford Fiesta. This is probably a product of the slightly dead feeling that the overly generous amounts of assistance lend the steering, but even set up as such, the i20's front end responds pretty smartly to your inputs and grip levels seem strong enough for a car of this performance level. It will begin to understeer if you’re too unforgiving with your cornering speeds, but the progression from grip to slip is very easy to read and then correct.

Things get a bit more interesting where the powertrain is concerned, and this is largely down to the fact that it’s tricky to say just how far off production specification it really is. As far as performance is concerned, there’s little to be concerned about, really. The i20 isn’t exceptionally quick, but there’s enough shove here from the 1.0-litre motor to get up to open road speeds in a respectable fashion, and you can really feel the extra electric assistance from the 48-volt mild-hybrid system when moving off from a standstill.

The engine is generally pretty well-mannered under load, too - even without those NVH measures - and only really begins to run out of puff if you stretch it a bit too far.

The dual-clutch gearbox is a bit of a sticking point, though. Not surprising, really, as it isn’t quite finished, but it could do with being a bit more decisive when it is. Big prods of the throttle cause it to spend a fair while rummaging for a gear, and it has a tendency to shunt a little bit as it slotted one home, too. There’s certainly room for improvement here.

The regenerative braking also stood out. I’ve not come across a 48V system this powerful in a car this small before: a lift of the throttle really leads to a noticeable amount of deceleration, if not quite enough for EV-style one-pedal driving.

Whether or not this will remain when the car is finished is tricky to say, but if it does, it needs to present itself in a slicker fashion. At the moment, it comes on as if you’ve flicked a switch, but only after a second or so has elapsed since you’ve cleared your foot from the brake pedal. 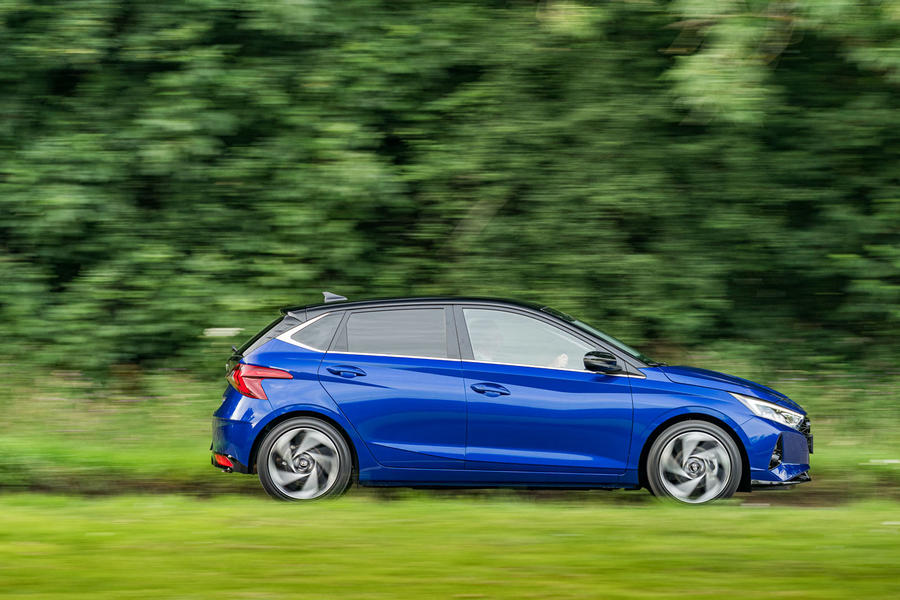 Given the fact our test car was still wearing some of the shiny black plastic trim pieces that often adorn pre-production car interiors, it’s tough to say how much or how little design appeal will carry over from the exterior to the cabin. As this is a Hyundai, it’s probably fair to say that it won’t amount to much: those dual 10.25in screens can only do so much in an environment such as this. But even so, the interior still impresses for the sheer amount of space it offers.

There’s miles of leg room in the second row and head room isn’t too bad, either: six-footers should be able to fit just fine. The boot, meanwhile, offers up to 351 litres of luggage capacity, although it’s likely this will be slightly less in mild-hybrid versions.

We would have to drive the finished product before offering a definitive buying decision but, based on this brief pre-production drive, things seem pretty promising. Add in the fact that Hyundai will offer certain variants of the i20 with a range of active safety systems usually found only on larger cars and even greater levels of connectivity than before and there’s plenty to like.

Prices for the i20 are yet to be confirmed, but expect Hyundai to kick things off at around £15,000 with prices for the higher-end models such as this one starting around the £21,000 point. In any instance, watch this space.

It seems to be missing a front bumper

Expensive if you have a bump ☹️

It is fairly easy to find some fault with low cost cars are inevitably compromises have to be made because of price and size but one thing you cannot dispute us that with each successive generation of Hyundai or Kia they get closer to the best European car standards. They have long shown more design flair than the Japanese makers and are more competitively priced. Now a much better proposition than most Toyota's and Honda's. I believe I read that they expect to be making 1million pure EV's a year within 5 years. I'm becoming a fan even if they still fall short of the dynamics of the recent Ford's and lack the brand (snob?) appeal of a VW.

It is fairly easy to find some fault with low cost cars are inevitably compromises have to be made because of price and size but one thing you cannot dispute us that with each successive generation of Hyundai or Kia they get closer to the best European car standards. They have long shown more design flair than the Japanese makers and are more competitively priced. Now a much better proposition than most Toyota's and Honda's. I believe I read that they expect to be making 1million pure EV's a year within 5 years. I'm becoming a fan even if they still fall short of the dynamics of the recent Ford's and lack the brand (snob?) appeal of a VW.