BACK TO ALL NEWS
Currently reading: 2021 Hyundai i20 N hot supermini officially previewed
UP NEXT
Spending 48 hours touring in a Ferrari Roma

Hyundai has released new official images that preview the design of its i20 N hot supermini, ahead of a reveal in the coming weeks.

They show the Ford Fiesta rival in the N brand's familiar shade of 'Clean Slate' grey, and reveal that it will be marked out from the standard i20 with red brake callipers, flared arches, more angular bumper designs and coloured lower trim.

The long-awaited Ford Fiesta ST rival has previously been seen at the Nurburgring sporting heavy camouflage, but the wraps started to come off as winter testing got under way in Arjeplog, Sweden earlier this year.

The prototype was painted in the N division’s now-familiar shade of grey and sat atop a set of bespoke sports alloys wrapped in low-profile rubber, behind which lie much bigger front and rear brake discs than those of the standard i20. The i20 N also appears to sit closer to the ground for a lower centre of gravity and improved dynamic performance.

The front and rear of the test car remained shielded from view, suggesting the hot hatch will gain additional bespoke styling details - likely a rear spoiler, front splitter, enlarged air intakes and an extra exhaust outlet - in line with its bigger i30 N stablemate. 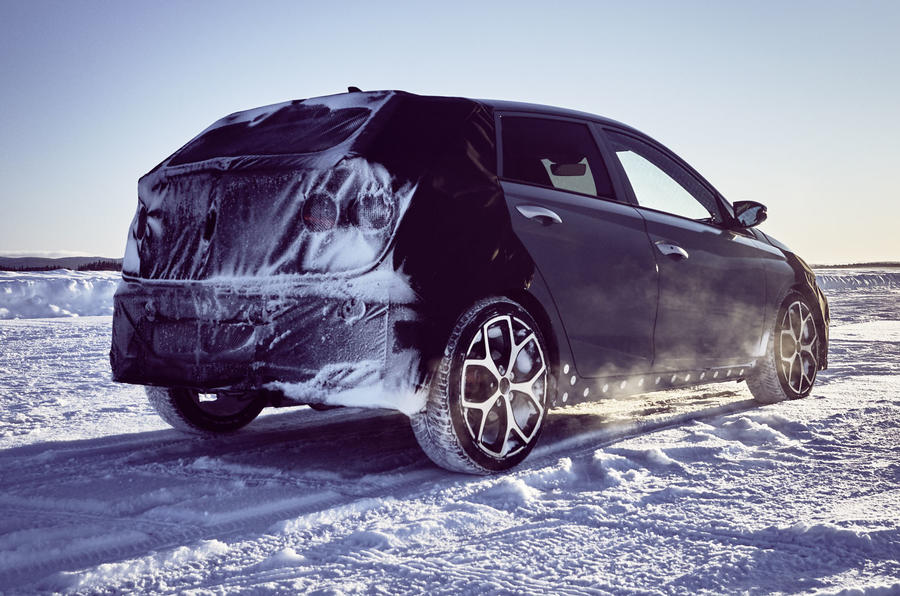 Hyundai WRC driver Thierry Neuville was on hand in Sweden to give his impressions on the i20 N: “Very interesting car. Very precise. Very easy handling. The engine is revving nicely and the noise is very interesting as well. I’m looking forward to get this one to drive in the WRC.”

Neuville’s current racer, the i20 WRC, was also present, alongside the brand’s RM19 mid-engined prototype test bed, both of which are claimed to have inspired the development of the latest addition to Hyundai’s performance portfolio.

Although the i20 N will not match the 380bhp RM19 for outright power, the brand is confident that it will be "racetrack capable". Although Hyundai is yet to confirm details of its powertrain, we’re expecting the model to make use of an upgraded version of the brand’s 1.6-litre turbocharged petrol motor for a power output of around 200bhp.

Elsewhere, the i20 N will gain a stiffer suspension set-up, sports seats and a range of new configurable driving modes.

There’s no word yet on when we can expect to see the i20 N officially unwrapped, although it’s set to join the i30 N and a new Kona N hot crossover in dealerships from early next year.

Hyundai reveals all-new i20​ supermini for 2020

Door handles are silly but my point isn't

The door handles still look odd to me because they are distanced differently from the window line than the front ones as explained previously - that's a measurable fact, not an optical illusion. This looks odd in the metal as well as in a magazine, no matter what the camera angle, as I pointed out in my original comment. It reminds me of when someone gets their measurements wrong when designing something then goes ahead and builds it anyway then thinks it'll do and no-one will notice.

It's not a silly point either - if you're going to pay well over £20,000 for a small supermini class car these days, you have every right to expect something very close to exactly what you want. Having a car that looks this odd doesn't appeal to me, or the constant grief I'll get from people saying the door handles don't look right, so it's a no from me unless huge discounts were involved in a potential sale.

On the recent preview images, I cringe when I see this kind of marketing nonsense. It doesn't tell me anything, and it's not as if Hyundai have the same sort of clout as some other manufacturers to attract that kind of brand-fan hysteria anyway (yet). I know more about random social media 'bloggers' or 'influencers' from reading Hyundai's online content than I can find out about their cars!

The door handles still look odd to me because they are distanced differently from the window line than the front ones as explained previously - that's a measurable fact, not an optical illusion. This looks odd in the metal as well as in a magazine, no matter what the camera angle, as I pointed out in my original comment. It reminds me of when someone gets their measurements wrong when designing something then goes ahead and builds it anyway then thinks it'll do and no-one will notice.

Nah.  If the handles were positioned how you are talking about it'd look all wrong.

Didn't Ford own them at one time?, to all intent and purposes, this is like a Fiesta.

Late to this conversation but

Late to this conversation but I agree with Gavsmit that the rear handle isn't in line with the front handle and or window line so does look a little odd. Doesn't offend me but I see what Gavsmit means, it's the tail lights looking too low or oddly positioned that makes the car look awkward from rear angles to me but again, not offensively so. Neither oddity would prevent me buying if I was after a new supermini.
View all comments (9)