New spy images show what appears to be an R performance variant of the Volkswagen Tiguan testing at the Nurburgring.

While initially appearing to be an example of the high-end Tiguan R-Line, tell-tale signs that this is something more special include a visible intercooler behind the lower air intake, larger brakes and, most notably, the same quad tailpipes as the Golf R hatchback.

A subtly reworked front end and other styling tweaks compared with previous Tiguan R prototypes indicate that it will likely make its official debut when the standard Tiguan is facelifted later this year. The Tiguan will be the third model in Volkswagen's range to receive the R treatment, sitting above the newly launched T-Roc R and below the forthcoming plug-in hybrid Touareg R.

Speaking to Autocar recently, R division boss Jost Capito spoke candidly about the idea of a Tiguan R. “I can see a place for a Tiguan R,” he said. “We’ve seen the good things that can be achieved with the T-Roc, but the Tiguan would be a different kind of car. It would have to be more of an everyday model, like the Touareg.”

The first time a performance-enhanced Tiguan mule was seen testing was in 2017, when snappers caught a prototype featuring a five-cylinder turbocharged engine likely sourced from the Audi RS Q3. 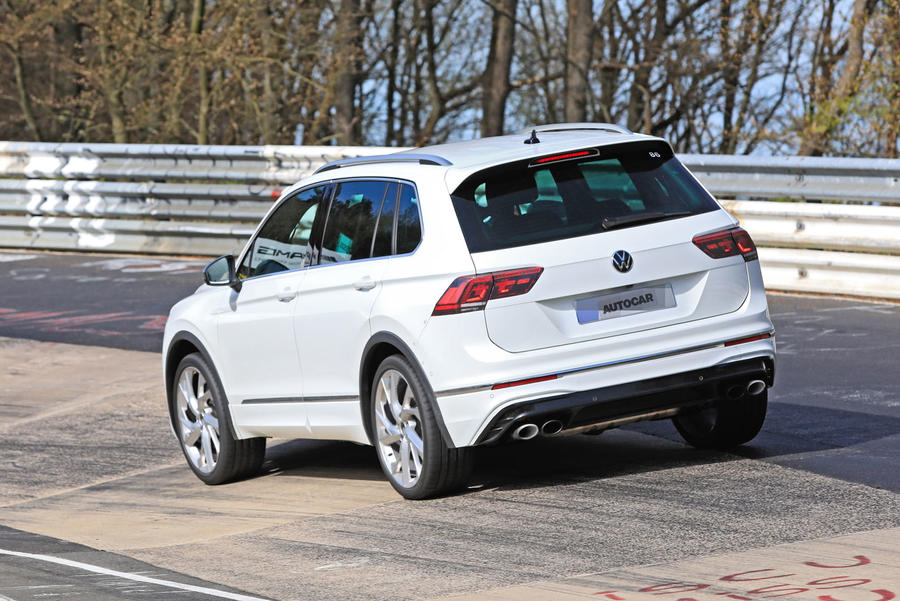 It's thought that a hot Tiguan was delayed for two significant reasons. First, the model was shuffled down the priority order while the Volkswagen Group rushed to homologate its cars under the new WLTP testing regime. Second, the launch of Cupra as a brand in its own right meant a hot Seat Ateca was pushed to the front of the development queue.

The Tiguan R is expected to now feature the same 296bhp EA888 2.0-litre four-cylinder unit as found in a number of Volkswagen Group performance models, including the Cupra Ateca and Golf R. Mated to four-wheel drive and a seven-speed dual-clutch automatic gearbox, it should mean a 0-62mph time of around 5.0sec. Chassis upgrades will feature, too.

No confirmation of a launch date has been communicated yet. However, the sighting of these prototypes adds weight to earlier rumours that a Tiguan R would launch before the year is out.

At the unveiling of the smaller T-Roc R, Capito said that his task is to make the sub-brand “to Volkswagen what M is for BMW”. He went on to say: “For the future, the Golf and T-Roc will not be the only ones, that’s for sure.”

New or face lifted cars usually struggle, I mean who wants a new car that's not that different from the previous model?

Wow what a substantial

Wow what a substantial facelift.. still looks like a ruler was used to design it, the front actually looks more dated, looks like the face lifted Eos from years ago or last generation Passat
405line 12 April 2019

Be a good oppurtunity...

...to ask VW to forget about going round corners quickly and ask VAG to make a more comfortable car with smaller wheels and tyres as per Lawrence Allans' article. Personally I couldn't care less and I suspect due to the "off centre" nature of these vehicles, softer suspension would mean that the "top bit" would be floppy like a dinghy and the occupants would feel sea sick.