Volkswagen is set to expand its R performance lineup with a range-topping version of the Touareg SUV, expected to be unveiled next year and go on sale in 2021.

The Touareg was confirmed as “the first R model to go plug-in hybrid” by VW’s sales and marketing boss Jürgen Stackmann, who was speaking prior to the reveal of the new Mk8 Volkswagen Golf.

After confirming a Touareg R, Stackmann went on to say “ we start with that journey, and the task is out there for Joss Capito and his team to deliver us an electric future for R. Then that’s the journey for R. For the next five years as we are launching some Rs next year we will couple these cars with a very strong message for low emissions”.

The Touareg is currently offered with a plug-in hybrid variant in China, with that car expected to go on sale in Europe in the coming months. It is powered by a 2.0-litre four cylinder turbo petrol engine mated to a 134bhp electric motor with a combined output of 363bhp and 516lb ft of torque.

Currently, the fastest Touareg offered in the UK is the 335bhp V6 non-hybrid petrol model. Whether or not Volkswagen is planning to electrify this powertrain to push its output beyond 400bhp remains to be seen, but it’s also possible that the four-cylinder unit could be boosted further to suit the R.

When asked about the possibility of a fully-electric R, Stackmann admitted there is still a way to go before such a thing is viable.

“For the immediate future I think we will still see Rs in the conventional form, so that they will be true to what R is today but obviously we need to worry about it as our emissions need to come down in 2020, R needs to go on the way. “

The Golf R, set to go on sale next year, is expected to make use of a highly tuned version of the Group’s EA888 2.0-litre petrol engine delivering around 320bhp. A Golf R Plus, with up to 400bhp, is also mooted to take on the Mercedes-AMG A45. 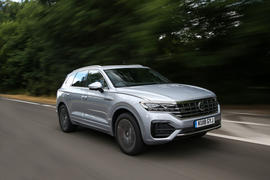 Tesla announced yesterday of their profit for Q3 and the many good news upcoming, then Autocar wrote an article which said Tesla is in big trouble and will go under any moment (just as they do every quartter). They deleted that piece and is nowhere to be seen. How embarassing can you get Autocar...so incompetent.

I have a copy of what Hilton wrote....and you have mis-quoted massively FR12!

Personally, I dont think they will survive, espacially as the mainstream premiums are catching up- better the devil you know - especially given Tesla's poor build quality.

Investors must be nervous by now.

Oh, and the article is still there under Car News!....not taken down/deleted at all.

It was taken down, it was embarrasing and biased. If it's back up I can only think Autocar thought by hiding it for a while it would take the heat off the writer.   I suppose at the end of the day Tesla aren't going to stop spending money at Autocar!