From £21,4457
Golf R substitute arrives in the UK with almost identical hardware but an alternative persona
Open gallery
Close

That car has a name, of course: the Golf R. But the proposition changed last week, because the Golf R officially went off sale (don’t worry, it will be back in Mk8 form) and the T-Roc R arrived to step into its 296bhp shoes.

Individual preferences being what they are, the fact that the T-Roc R is a crossover will automatically have made the notion of an ultra-quick, all-weather Volkswagen hatch less desirable to many people. And this being Autocar, you may well be one of them.

Equally, many people will only now begin to consider buying an ultra-quick, all-weather Volkswagen, because they can finally get one with crossover styling and a marginally roomier interior.

And in this sense, the T-Roc R is quite a rare thing: the first Volkswagen R GmbH-developed SUV since the 2008 Touareg R50, which today is a model that any product planner would be escorted from the building at gunpoint for merely suggesting; it used a 5.0-litre V10 turbodiesel.

The point is that there may well be even greater demand for the T-Roc R than there was for the Golf R, and the owners will have subtly different priorities. Money will be a universal factor, however, because the T-Roc R costs more than £40,000 once you’ve ticked an option box or two – and we'll come back to that uncomfortable fact shortly. 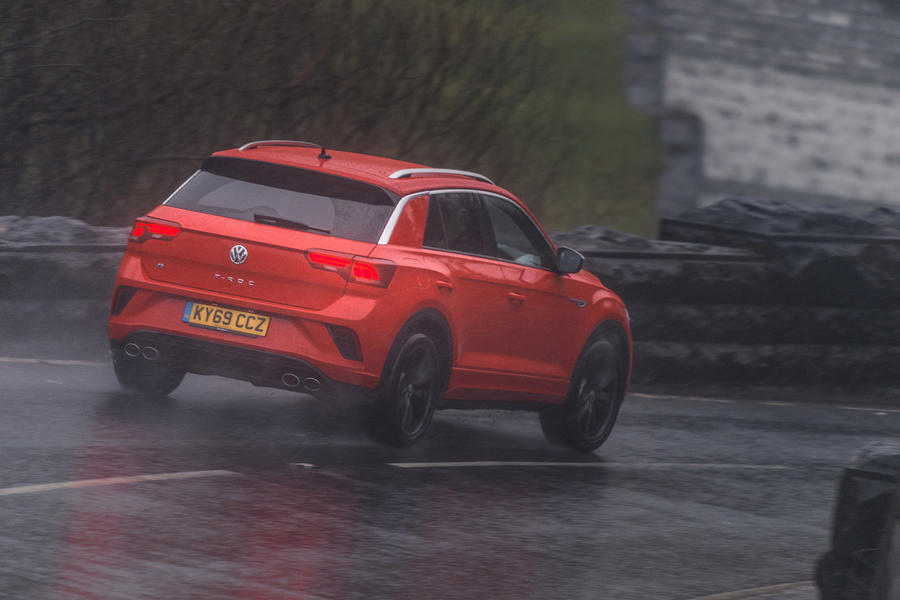 We’ve driven this car before, in the sunny south of France; waterlogged Welsh roads feel a more representative test of its capabilities.

First, though, you can tell an R-spec T-Roc by the new rear diffuser, skirts and wheelarch extensions, as well as additional daytime running lights at the front that sit within a new bumper. British cars also get 19in alloy wheels as standard to go with the 20mm drop in ride height. Then there are the quad exhausts, straight from the Golf R playbook; if you opt for the Akrapovič option, the tips are perforated.

So, it doesn’t go under the radar like the Golf R Estate will, but it’s still reasonably subtle, especially in blue.

The interior is more disappointing. The Alcantara-trimmed seats are comfortable and easy to slide into but fail to impart much in the way of occasion, while the quality of plastics below elbow height fails to live up to the £38,450 asking price. Typically for Volkswagen, the switchgear and infotainment are very well executed, but you can’t get away from the ergonomics and the practical ambience. In lesser T-Roc variants, the high ceiling and low transmission tunnel generate a welcome feeling of space, but for an R-branded product, it’s all a bit van-like. Except for the steering wheel, which is beautifully thin-rimmed and lovely to hold.

The T-Roc R moves well, though. Not, it must be said, as sweetly or smartly as the Golf R, despite the shorter wheelbase, but well enough to be considered more fluid on the move than either the Audi SQ2 or Cupra Ateca, which are its direct rivals (and, strangely, its corporate cousins).

The stand-out strength is wheel control. Our car’s optional adaptive dampers (£695; don’t even think twice) allow the suspension to move generously, but rarely does it ever become out of sync with the road very rapidly scrolling backwards beneath it, and roll is truly minimal. That’s a proper R trick, and the added bonus is that the T-Roc R can deliver an enviably plush ride in Comfort mode if you back off and catch your breath.

What’s lacking is an element of involvement. To some degree, this is true of the Golf R, whose steering is accurate and very nicely geared but low on feel. However, the Golf's traditional hatchback driving position puts you that much closer to the action, making it more fun and engaging to chase the throttle anywhere and everywhere, whatever the weather or camber.

You will still want to chase the throttle in the T-Roc R. We know how good the EA888 2.0-litre turbocharged petrol engine is and all about its ability to hit you with torque from practicality anywhere in the rev range. The exhaust pops are overdone in Race mode, but it’s a smooth, potent engine, and the dual-clutch automatic gearbox pairing is almost impossible to fault in objective terms.

Volkswagen has also redeployed its Haldex-developed four-wheel-drive system, which can channel half of the available torque to the back axle via a multi-plate clutch, and it can do so faster than ever before. Traction is never an issue, although this is very much a car to drive within the limits of grip. Push too hard and it feels frustratingly front-driven, while the stability control never really gives you free reign. 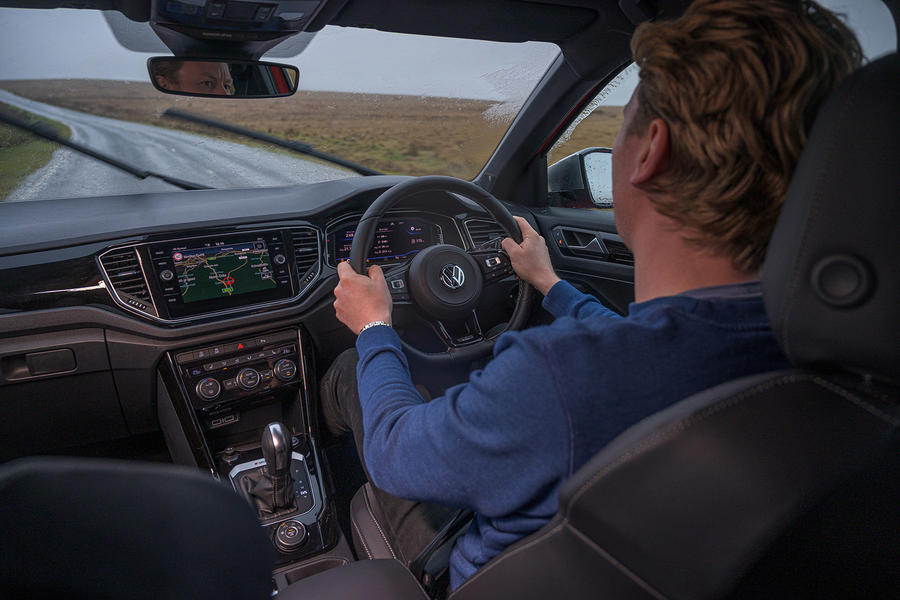 To go back to our original premise, the appeal of this car will depend on which group of people you belong to.

The former should try to buy the outgoing Golf R Estate, simply because it’s better to drive, less expensive and has a bigger boot than the T-Roc R. If you have extremely tall children, the additional head room in the back of the T-Roc will be useful, but it’s otherwise difficult to make the case for the new car.

The second, crossover-sympathetic group will find this hot example more forgiving to use on a daily basis than its main rivals and frankly more capable when they really want to shift. The Ateca and SQ2 are simply too stiff, though the BMW X2 M35i runs the Volkswagen closest and has a considerably more inviting interior.

None is much of a gem, but having close relations to the greatest all-weather hot hatch in recent memory means the T-Roc R shines brightest. 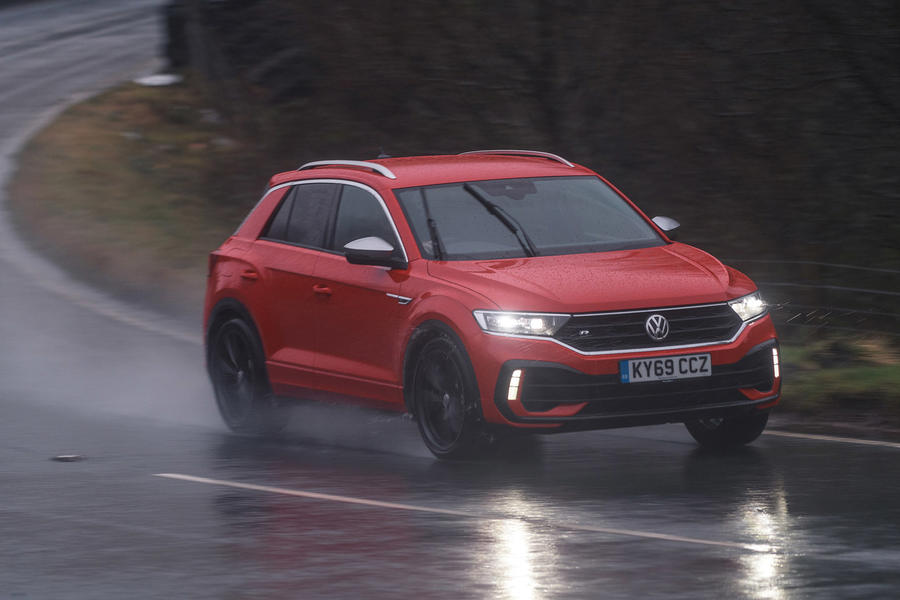 Anyone who buys a Volkswagen of this era is going to regret their dinosaur purchase of a filthy combustion car as soon as the ID3 becomes widely available.

Anyone who buys a Volkswagen of this era is going to regret their dinosaur purchase of a filthy combustion car as soon as the ID3 becomes widely available.

Wouldnt that apply to any ICE car from any manufacturer "of this era" ?

I'm sick of every reviewer

To be fair that suggestion was given for those who require more space as this doesn't provide much more than the standard golf.

To be fair that suggestion was given for those who require more space as this doesn't provide much more than the standard golf.

Then buy the Cupra Estate - much better looking (not sure if it’s AWD though).

So the problem with the Cupra estate is that both the Octavia and Golf look better and are more practical, their sales prove that. You might be bored with reviewers telling you to buy an R estate instead of T-roc but that's because it's faster, larger inside , better on fuel, better interior, has a lower cog and so handles better and in my opinion looks better than the T-roc, which sadly also has rather unappealing proportions . Tiguan yes , T-roc the hunchback brother .
typos1 22 January 2020

I m not fan of the R estate (it is a VW after all) but it looks a hell of a lot better than this piece of sh*t.

I'm not sure the county lines uninsured and unlicenced drivers of these will care too much about "lack of involvement" after they've stolen it from your driveway... (sad state of affairs, but prove me wrong!)