A mule for the eighth-generation Volkswagen Golf has been spotted testing in public beneath the cut-and-shut body of a current-generation car, with new cabin infotainment and different centre console buttons.

The sighting, which also presented our spy snapper with an opportunity to photograph the car's four-cylinder engine, comes three months after VW board member for procurement Ralf Brandstätter said that the next Golf was at an advanced stage of development.

In fact, development has been under way for more than two years now, with key aspects of the Golf already described by high-level VW sources as having committed project status.

Despite the upheaval brought to its operations by the diesel emissions scandal and subsequent legal complications in key markets, VW has held firm to the original launch schedule for the car. That means volume-selling versions of the new Golf are planned to reach UK showrooms in the final quarter of 2019.

Although the first sighting provides us with no clues as to how the car will look, an earlier sketch (below) released by VW suggests the car will retain the wedge shape of its most recent forebears. Our new test mule sighting adds to this by indicating that the cabin will take an evolutionary step forward, with a larger digital instrument cluster and new centre console part of the available upgrades (more of which below). 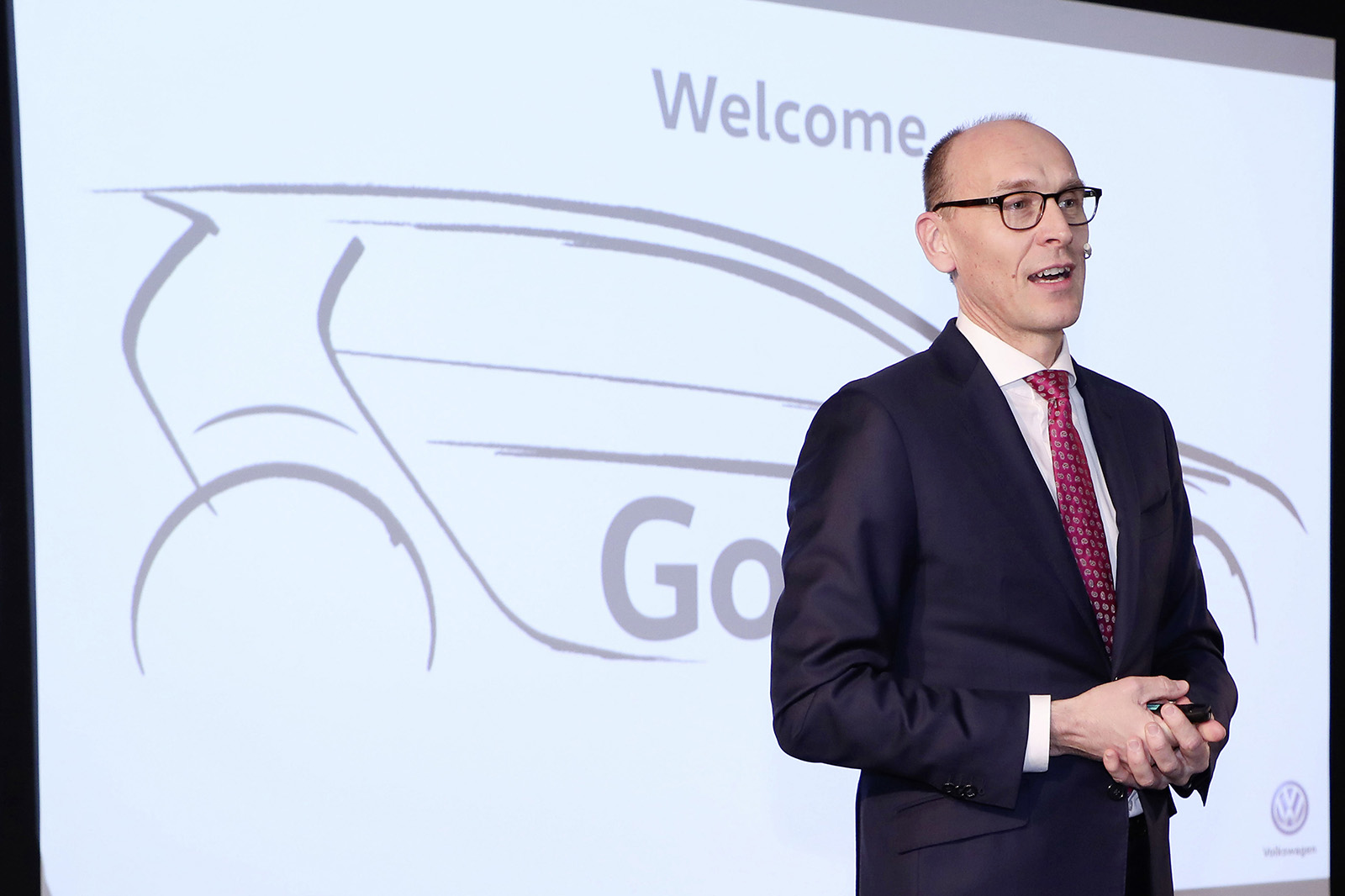 VW has laid the foundation for cylinder shutdown and engine-off coasting functions in the turbocharged 1.5 TSI Bluemotion petrol version of the updated current Golf through the adoption of a twin 12V electrical system. Now Autocar can confirm that VW is set to take the fuel-saving technology one step further.

The company is planning a more contemporary 48V system that will enable the Mk8 Golf to be more comprehensively networked for more intuitive operation and greater fuel savings, particularly with petrol versions. The adoption of this electrical system indicates that VW is placing greater emphasis on petrol units than in past generations, with functions such as cylinder shutdown and engine-off coasting set to become standard on many models.

Autonomous driving will be a key feature of VW's best-seller in its eighth generation, as the brand will shoehorn even more advanced autonomous technology into the new model, as well as ensuring that it is the most connected car in the company's history, ahead of the all-electric ID hatchback that's also due in late 2019.

Head of VW's compact series, Karlheinz Hell, revealed: "The next Golf will take Volkswagen into the era of fully connected vehicles with extended autonomous driving functions. It will have more software on board than ever before. It will always be online and its digital cockpit and assistance systems will be the benchmark in terms of connectivity and safety."

The current Golf benefits from VW's semi-autonomous Traffic Jam Assist system, which controls the steering, acceleration and braking of the car under 37mph, so it's certain that the Mk8 model will take a leap in advancement over this. Elsewhere, the Audi A8 is the first car in the wider VW Group to achieve Level 3 autonomy where permitted. 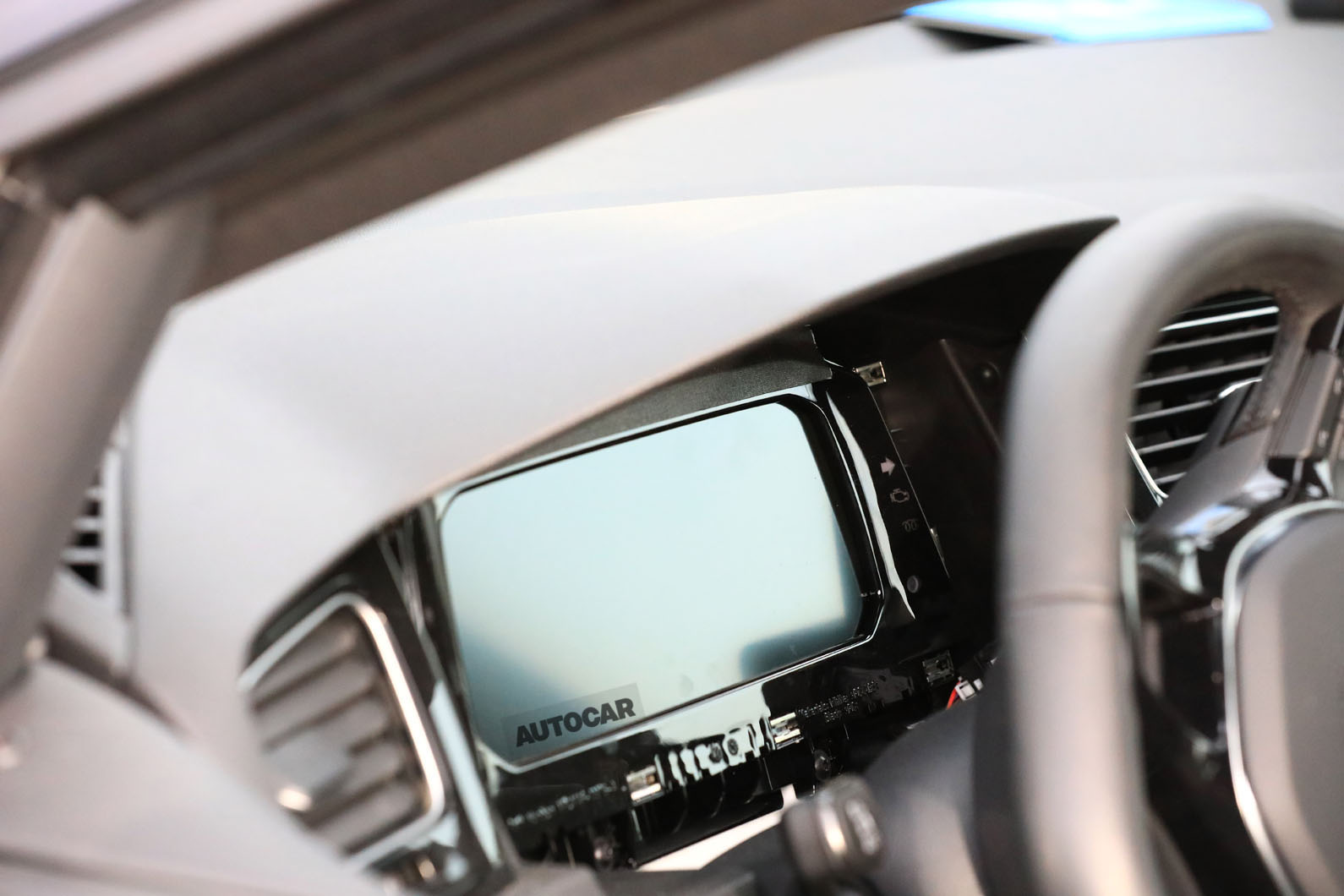 With VW’s ID electric line-up on the way, the eighth-generation Golf will have a range of petrol, diesel and hybrid powertrains.

The new or upgraded powertrains will be offered in combination with either a six-speed manual or seven-speed dual-clutch automatic gearbox, depending on their configuration. Alongside front-wheel drive, VW also plans to offer optional four-wheel drive (which it calls 4Motion) in selected models, like it has done in the previous four generations of its perennial best seller.

On the petrol side, the entry-level car will forgo the existing turbocharged 1.2-litre four-cylinder engine of today’s model for the lighter turbocharged 1.0-litre three-cylinder unit already launched in the latest Golf.

The existing turbocharged 1.5 TSI engine, which made its debut as a replacement for the 1.4 TSI in the facelift, is set to be upgraded with a particulate filter. The move aims to provide lower exhaust emissions to help achieve the European Union’s prescribed 95g/km fleet average CO2 levels by 2020.

New 1.5-litre diesel on the way

Diesels will include a yet-to-be-revealed 1.5-litre four-cylinder unit as a replacement for today’s 1.6 TDI. There will also be an updated version of today’s 2.0 TDI in at least three power outputs.

Both diesels will be coupled with a newly developed SCR (selective catalytic reduction) system that is claimed to contribute to a 10% reduction in CO2 levels compared with today’s diesels. 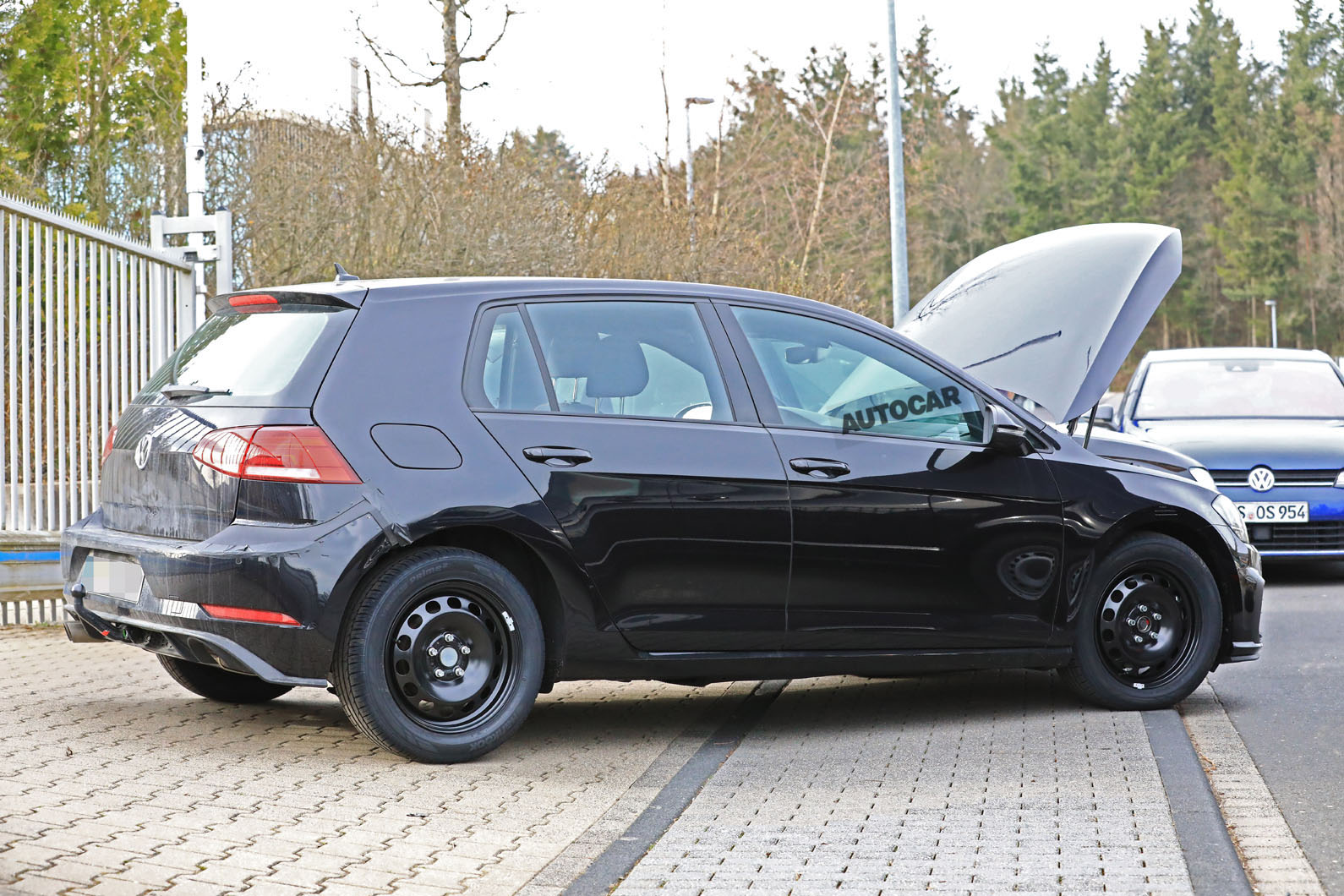 The next-generation VW Golf GTI is set to adopt a mild hybrid powertrain that promises to boost performance and refinement while reducing fuel consumption and emissions compared with the recently facelifted current model.

The adoption of the 48V electrical system and integrated starter motor on the new hot hatchback is part of the powertrain overhaul across the Mk8 Golf line-up. The changes are also set to make the upcoming model the most powerful series-production Golf GTI yet.

Although the new Golf GTI is still almost two years away from introduction, sources close to VW research and development boss Frank Welsch have revealed that the initial performance targets point to a power output similar to the 261bhp of the limited-edition Golf GTI Clubsport.

Scheduled to go on sale in the UK in 2020, the Mk8 Golf GTI will retain an internal combustion engine: VW’s familiar turbocharged 2.0-litre petrol unit.

However, the introduction of the 48V electric system will allow the four-cylinder engine to receive comprehensive modifications. It’s likely that the exhaust gas turbocharger of today’s model will make way for an electrically operated compressor that offers improved low-end response and a broader plateau of torque for added flexibility.

Additionally, the integrated starter motor will allow VW to provide the front-wheel-drive Golf GTI with a so-called boost function, in which an electric motor mounted in the front section of its standard seven-speed dual-clutch automatic gearbox supplements the combustion engine in Performance mode.

The basis for the next Golf is an updated version of the versatile MQB platform used by today’s model. VW insiders suggest it will use a greater percentage of lightweight metal than the existing structure for a 50kg reduction in weight.

Planned modifications to the construction process are also said to provide more streamlined production and reduced build times as part of a strategy aimed at improving the economy of scale and profitability of VW’s best-selling model.

Although there are still some time to go before the new Golf’s introduction, VW says it has already locked in the car’s design, which has been developed under the guidance of the company’s latest design boss, Michael Mauer, who was responsible for the styling of the current Porsche line-up.

Those privy to the latest clay model mock-ups say the new Golf advances the classic hatchback look of its predecessors, with familiar proportions, reinterpreted details and simple surfacing to make it instantly recognisable as a Golf.

Key styling features described to Autocar include a thin horizontal grille bookmarked by smaller angular headlights than those in use today, with a distinctive LED daytime running light graphic.

The new car is also said to have more pronounced wheel arches and a heavily defined side swage line, in combination with typically wide C-pillars and a relatively upright tailgate. 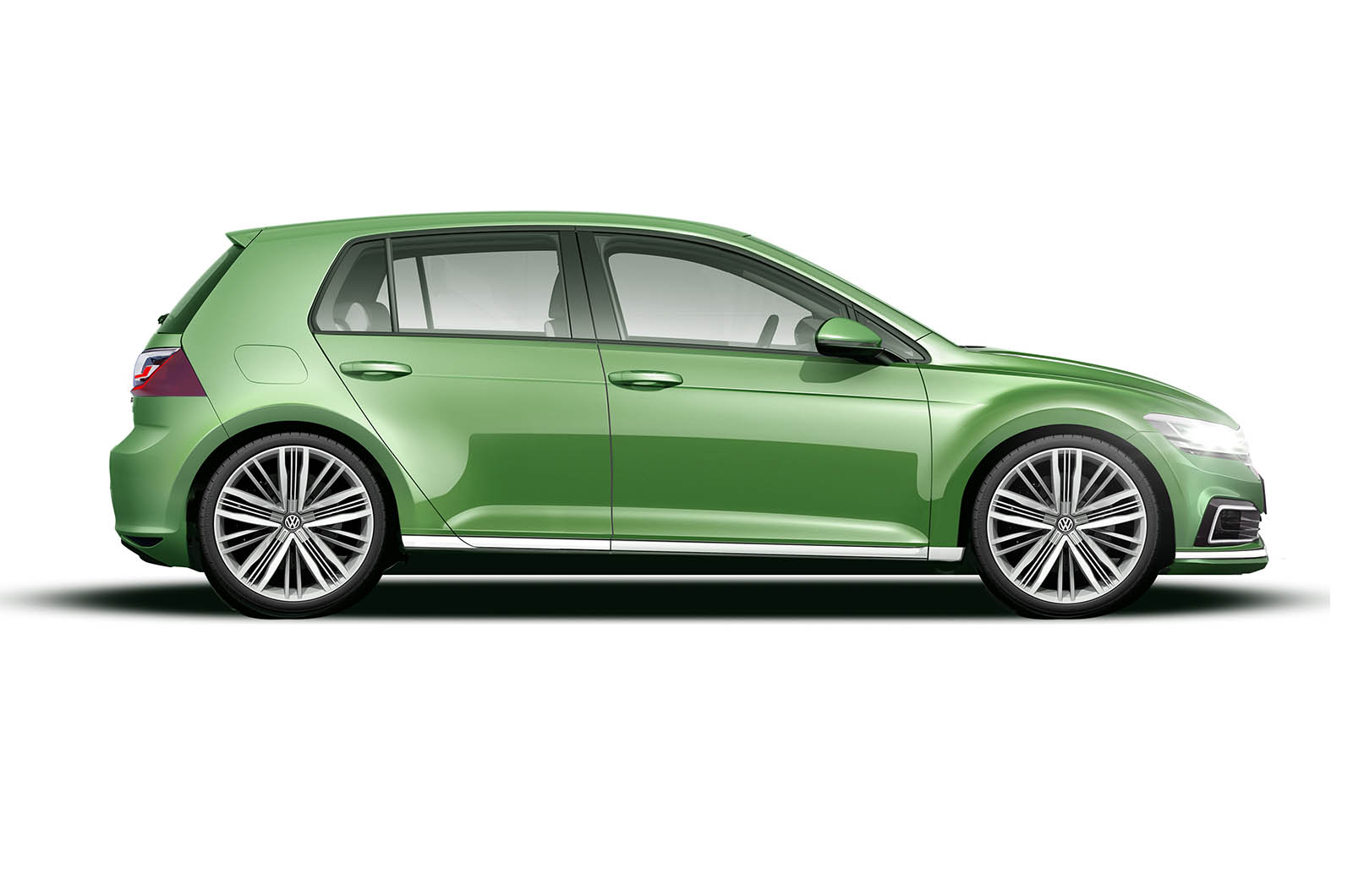 Three-door stays but no cabrio

VW plans three bodystyles: three-door hatchback, five-door hatchback and estate. There are no plans to develop a successor to today’s cabriolet model.

With a moderate increase in track widths at the front and rear, along with a slightly longer wheelbase and reduced rear overhang, the new Golf is said to offer greater interior space than the current car. As with the exterior, the cabin has been designed to be familiar to existing Golf owners.

The standard specification is set to include analogue instruments and controls but, as with the recent facelift of the current model, there will be options of high-definition Active Info Display digital instruments and a central touchscreen infotainment monitor.

Other systems will include autonomous driving functions that are also a feature of the recent facelift.

Volkswagen Golf GTI: which generation beats them all?

The 48v system is needed to effectively power an electric turbine. The starter motor, if I understand correctly, will work in a similar fashion to the system on the McLaren P1, by providing additional torque during acceleration. Power for this can be stored in supercapacitors rather than batteries. In this way, a much smaller engine can be tuned to provide the performance of a much larger one. However, the above system is not a 'hybrid' in the sense it cannot run on pure electric power alone.
yvesferrer 28 January 2017

I am thick: accepted! What is the point of a massively beefed-up starter motor? Go the whole hog and make the starter motor the engine, no?
Now, in the real world, VW sell many more cars to under-developed countries than advanced countries: how will they reconcile such complicated vehicles with simplistic infrastructures? A two-tier marketing exercise?
Will that technology extend to commercial vehicles, too?
The cylinder shutdown exists already on some versions of the 1.4 engine: have all the bugs been ironed out? Reading the on-line forums suggest different...
My next car is likely to be another VW (leasing has more or less locked me in) but I will look VERY carefully at what is on offer before making a decision, for sure!
View all comments (7)