BACK TO ALL TOP 10s
Currently reading: Top 10 best crossover hatchbacks 2022
UP NEXT
Electric sports cars

Demand is high for compact SUV-shaped family vehicles, and no segment is more competitive than the crossover hatchback one. Which cars make our top ten?
Open gallery
Close

Part of the reason SUV sales have been booming of late is the emergence of the crossover - a car that combines the taller driving position of larger 4x4s with the relatively compact dimensions of a regular family hatchback.

The Nissan Qashqai arguably kickstarted the market, and other manufacturers were soon to cotton on to the Japanese firm’s recipe for sales success.

These days, any car company worth its salt will have a contender in this segment, so consumers are spoilt for choice. But which models are worth the money? Here are our top 10 picks.

For years, Cupra was the sporting division of Seat – much like 'R' now is to Volkswagen – but today it stands as independent brand of its own, with unique designs and an altogether more athletic calibre than that of the old Seat mothership.

The Formentor isn't the first product of the reborn Cupra operation (that was the 306bhp Cupra Ateca, introduced in 2019), but it is by far the most convincing, being rakishly handsome, surprisingly spacious, good if unspectacular to drive, and generally interesting. We like it rather a lot.

The engine line-up is also usefully broad, ranging from downsized petrols to quick plug-in hybrids and the flagship 2.0 TSI, which uses the same four-wheel drive system and 2.0-litre TSI engine as the new Golf R. Rumour has it that Audi's thumping five-cylinder engine may yet find a new home in the Formentor, though equally, this car doesn't such an exotic engine in order to appeal.

Being well priced in relation to premium-brand rivals, and with a well-executed interior (infotainment aside), the Formentor does enough to top our list of family crossovers – at least for now.

Save money with new Formentor deals from What Car? 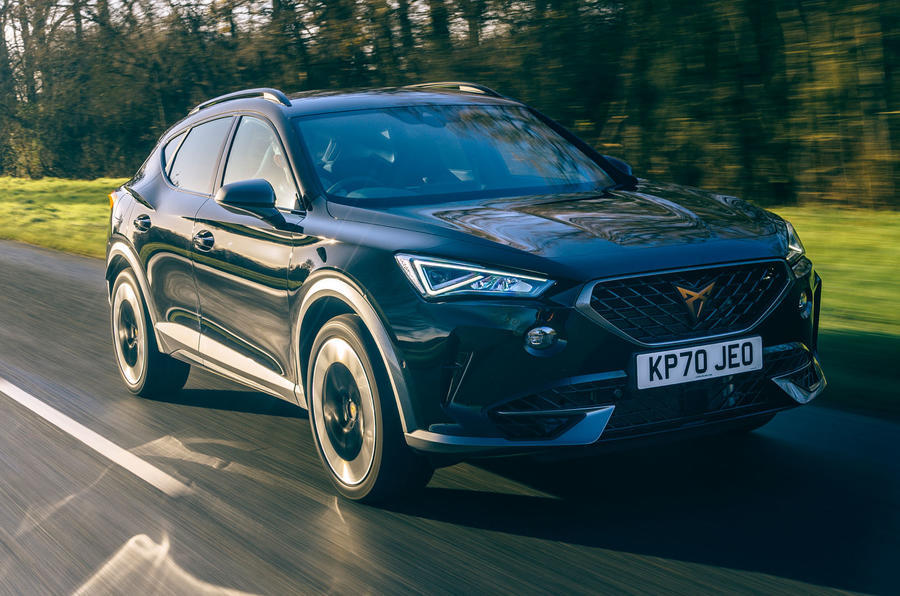 Seat’s first foray into the SUV corner of the market has been a hugely successful one. With the Ateca, the once floundering Spanish manufacturer now has a class-leader on its hands.

Lightly updated in 2020, it ticks all the right boxes so far as affordability, looks, economy and practicality are concerned and manages to be engaging to drive as well - something that can’t be said of many cars in this segment. The entry-level 1.0 TSI manual also starts usefully cheaply, at less than £24,000, though standard-fit kit at this level is still a little stingy.

It's not completely perfect, but at least old 1.6-litre diesel engine, which wasn’t ever as refined as the oil-burner in the Qashqai, has been replaced in the line-up with a new 2.0-litre unit. 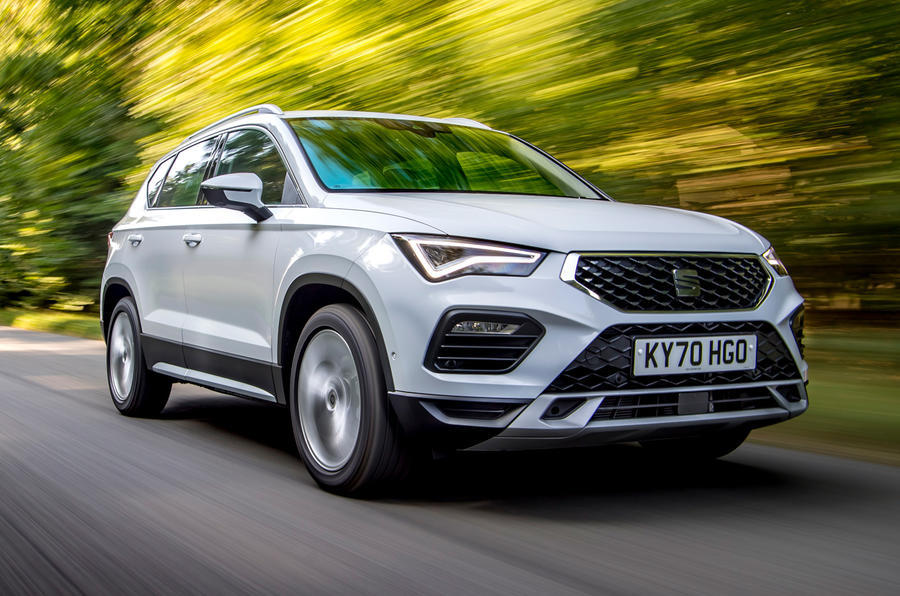 Save money with new Ateca deals from What Car?

Volkswagen’s first attempt at a crossover hatchback is a very impressive one. The T-Roc offers sharp, interesting styling, a well-made interior and handling characteristics that are more akin to those of a small hatchback than a proper SUV.

It’s not quite as good to drive as the Ateca and isn't quite as practical, but it wouldn’t be hard to recommend one.

The mid-spec model isn’t unreasonably priced, but like-for-like versions of the Skoda Karoq and Ateca are still slightly cheaper. 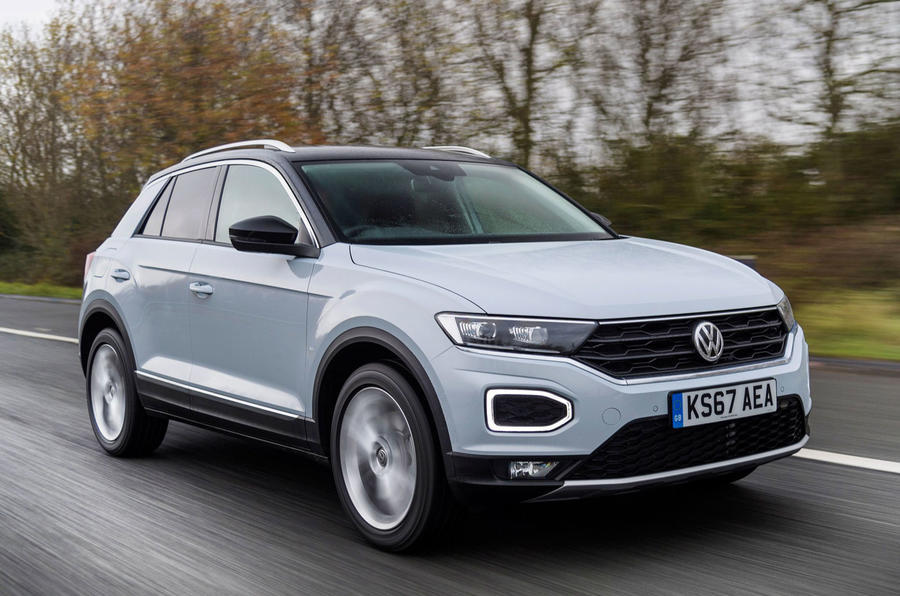 Save money with new T-Roc deals from What Car?

One of the more recent additions to BMW's X-branded range of cars – those models with greater practicality and a raised ride height – bears more hallmarks of a traditional hatchback than a crossover, and that's no bad thing.

In fact, given Jaguar has missed the mark dynamically with the E-Pace, those who cherish driving should put the X2 at or close to the top of their wish-list. In both turbocharged petrol and turbodiesel forms, the 2.0-litre four-cylinder engines offer a muscular and refined power delivery. The steering is also enjoyably direct, while body control is excellent by the standards of the class. There are more practical alternatives, but perhaps none that are as dynamically convincing. 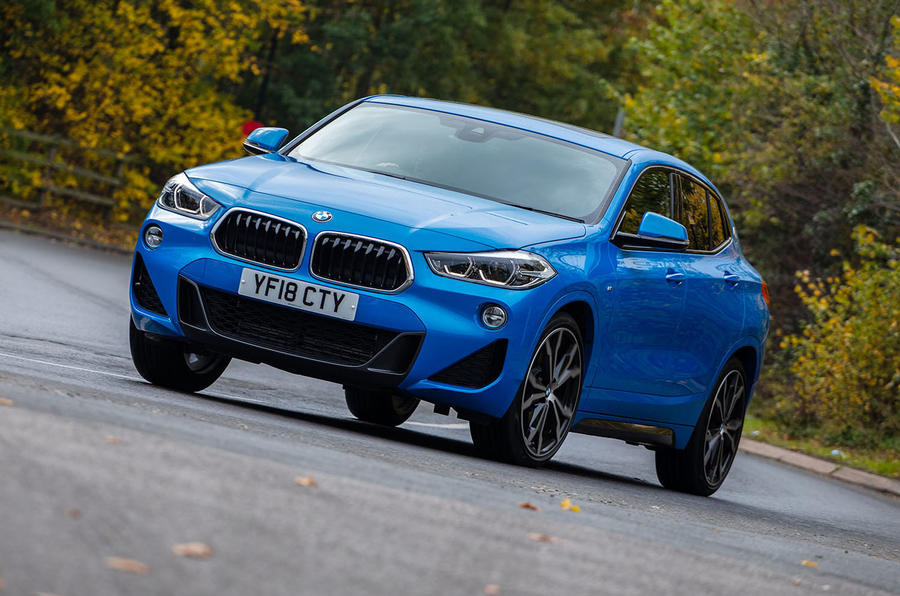 Save money with new X2 deals from What Car?

We like the CX-30 – its silky handling and plush interior stand it out in this class, and the attractiveness of the exterior design is matched only by the Cupra.

Neither is it an especially complicated device in concept: there is a choice of two petorl engines, and either front-drive or four-wheel drive. Either way, you get Mazda's mild-hybrid technology, and very nicely judged handling traits, by the class standards.

It falls down a touch in terms of interior space, and both the engine's lack the easy-access torque of rivals, so they need to be worked harder than you might expect. Otherwise, the the CX-30 is arguably the gifted car dynamically in this class. 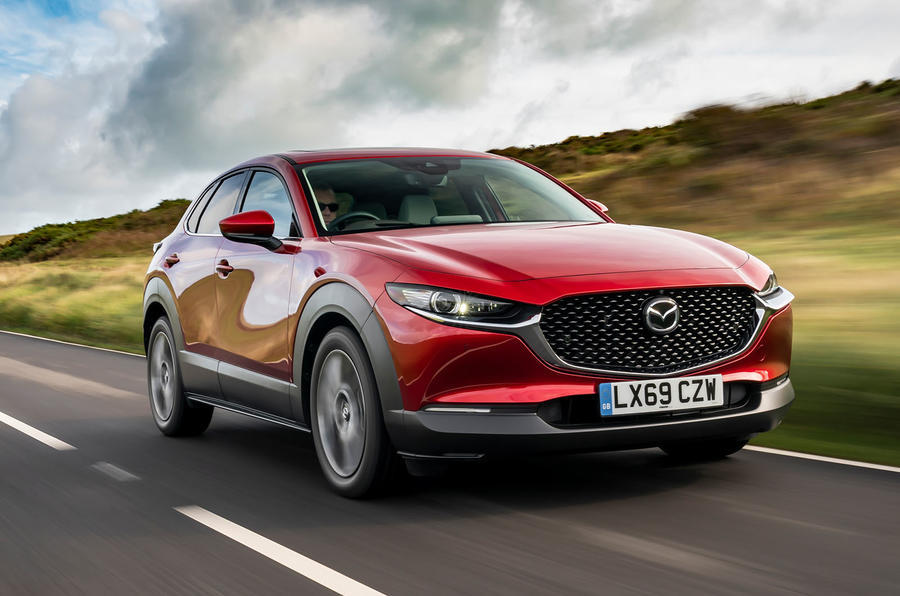 Save money with new CX-30 deals from What Car?

Gone are the days of dull, boring-looking crossovers. Stylistically, the Toyota C-HR is a breath of fresh air in the segment. Even next to more athletic rivals such as the Ateca, it stands out. It has the handling to back those sporty looks up, too.

While the original, 1.8-litre hybrid powertrain is a bit gutless, the new 2.0-litre version with 182bhp is usefully brisk, if still not in any way rapid. And while that sloping roofline may look great, it eats into rear head room. Toyota's infotainment system is also left wanting when compared with rivals, though the facelifted version does get Apple CarPlay and Android Auto connectivity as standard. 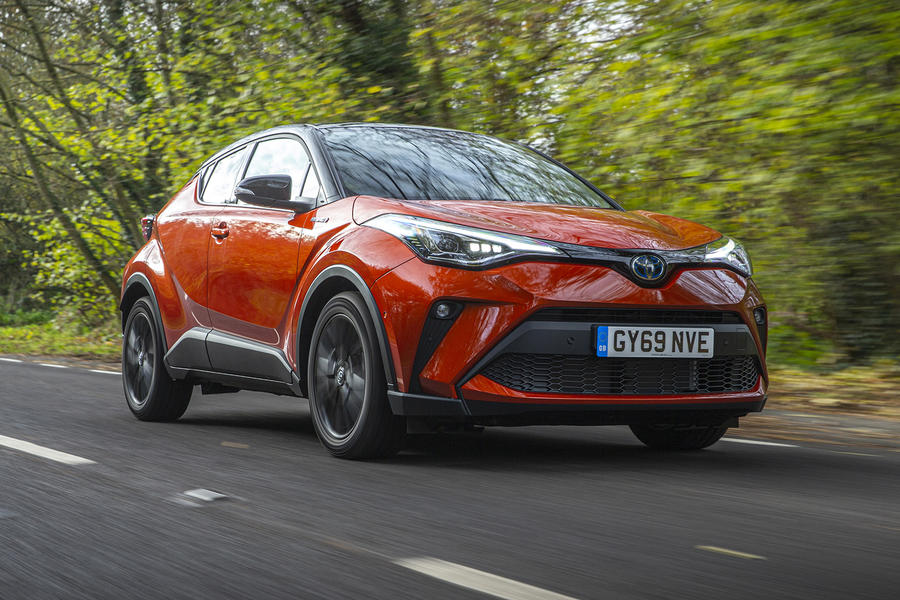 Save money with new C-HR deals from What Car?

This smart-looking South Korean crossover was comprehensively restyled for its fourth generation, and offers a great deal of space and standard kit, plus a solid five-year/unlimited-mile warranty for a reasonable outlay.

The interior ambience is now especially pleasing, too – not quite as uplifting as that of, say, the Volvo XC40, but more polished and sophistiated in feel than what you'd mostly find in Volkswagen Group products. Perceived quality is also strong, and the scarcity of hard plastics impressive.

Dynamically speaking, the Tucson remains unable to challenge the likes of the Formentor, but rolling refinement has improved, and there's a good degree of suppleness in the ride quality. Light steering and generous body roll mean B-road are better dispatched by some rivals, however.

As for the powertrain, there are no longer any diesels offered. The entry-level is the 148bhp 1.6-litre petrol, which is strong enough and can be had with or without mild-hybrid technology. We'd be most tempted by the 178bhp petrol rather than the full hybrid, which makes 227bhp but can feel strained at times. 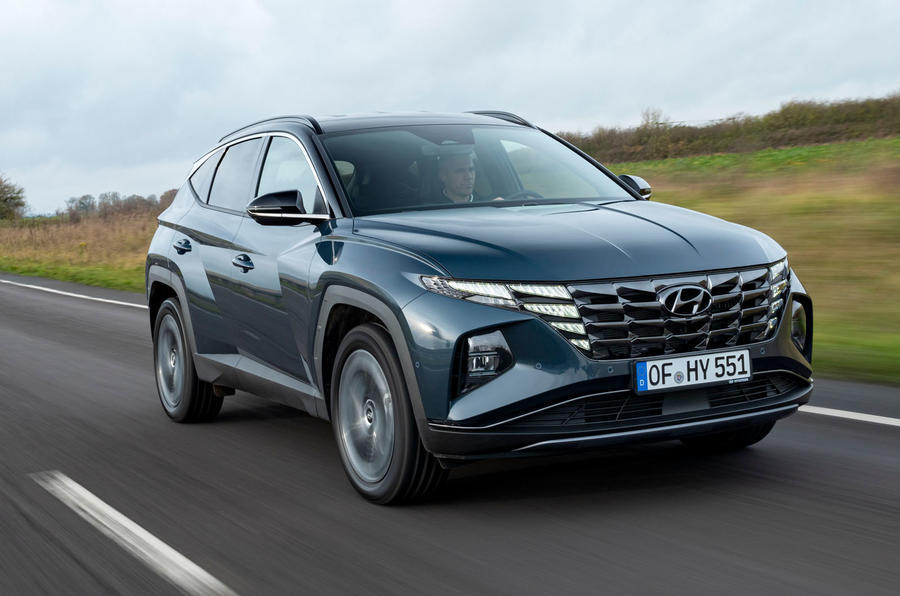 Save money with new Tucson deals from What Car?

A mid-life refresh in 2017 helped to keep the Qashqai - the original and definitive crossover - close to the top of pile, but an all-new version is due in 2022 and frankly it can't come soon enough.

It champions refinement, fuel efficiency and interior comfort but loses out to the Ateca (and others) as far as dynamic abilities are concerned, to the T-Roc on style and desirability, and to the Formentor on both counts.

The Qashqai's steering is overly light in its regular setting, and noticeable body roll discourages properly spirited driving. Nissan's infotainment system is also starting to fall behind. On the whole, though, the Qashqai is still hugely competitive in this segment and thoroughly recommendable. 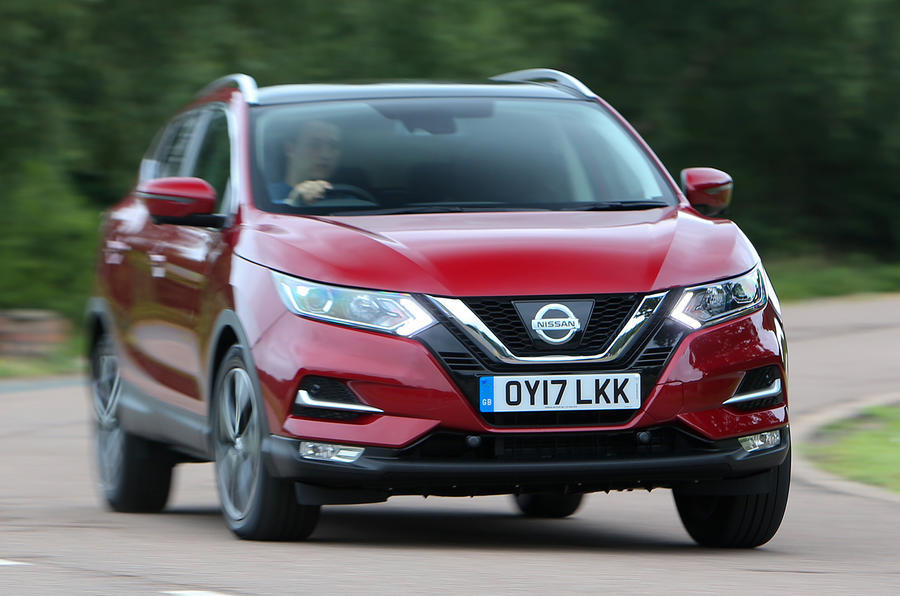 Save money with new Qashqai deals from What Car?

Given the success of the standard Ceed, the Xceed crossover, which follows a familiar recipe of raising the hatchback's ride-height and beefing up the looks but without really altering anything oily, was the model that Kia had to make.

It's sure to sell well, but that's more because of the devastating popularity of the segment than any exceptional appeal on the Xceed's part. Indeed, this is an attractive crossover with better-than-average driving control and a reasonably fluid ride, but there are more frugal and spacious cars among its peer, and in this class those are the attributes that count. 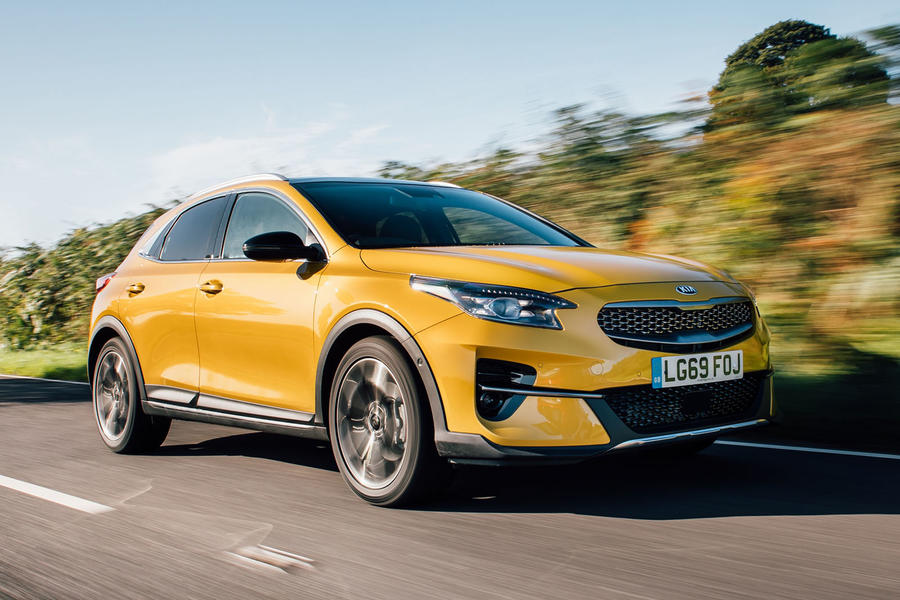 Save money with new Xceed deals from What Car?

As is the case with all Skoda cars, the Karoq brings affordability, value for money and practicality to its market - all good things for family buyers.

It’s also a handsome looking thing, if a little hard to distinguish from its Spanish cousin, the Ateca. The Karoq is comfortable out on the open road, if a little unremarkable dynamically.

It’s a very competent replacement for the Yeti, although it lacks the character and flair of its predecessor – which is a bit of shame, really. 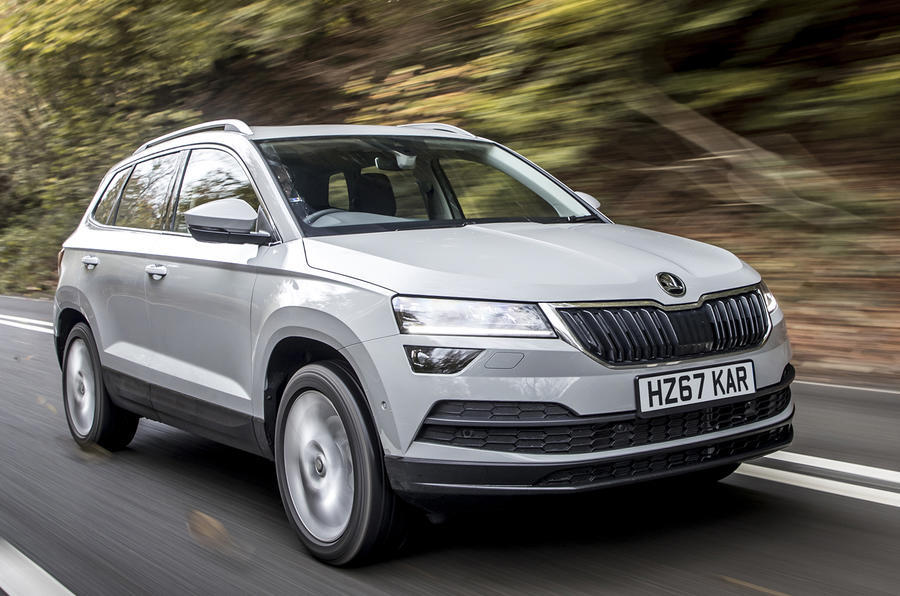 Save money with new Karoq deals from What Car?