BACK TO ALL NEWS
Currently reading: How Infiniti is salvaging its reputation in BTCC
UP NEXT
Munich motor show 2021: all the new cars on show

The UK never saw much in Infiniti's Q50, but Laser Tools Racing did. Now it's challenging BMW for the gold
Share
Open gallery
Close
Share story

Given the dominance of the West Surrey Racing-run Team BMW 330i M Sport saloons in last season’s British Touring Car Championship, it was hard to see how any operation could hold a candle to title holder Colin Turkington in 2020.

With five meetings already in this year’s book, the major threat to the Northern Irishman has come from an unexpected quarter: the Laser Tools Racing Infiniti Q50, particularly in the hands of Ash Sutton. At the time of writing, before Thruxton, Sutton had taken four wins, compared with Turkington’s two, and was just 10 points behind the series leader.

There have been many raised eyebrows at the Laser Tools Racing Infiniti programme. Those mostly stem from Infiniti’s previous challenge in the BTCC, which ended in embarrassment.

If there was an example of how not to run a BTCC team, it was surely the 2015 campaign from Pro Motorsport and its Q50 saloons. The squad was backed by the Support Our Paras initiative and was crewed by injured servicemen. There was no problem with that part of the deal, but the underpinnings behind the team weren’t solid. Infiniti got behind the programme initially but walked away after just three rounds. Pro Motorsport struggled on to the end of the year, then mothballed the project.

But now the name of the brand is back on the grid, and Sutton looks to be a major threat to the most coveted trophy in UK motorsport. 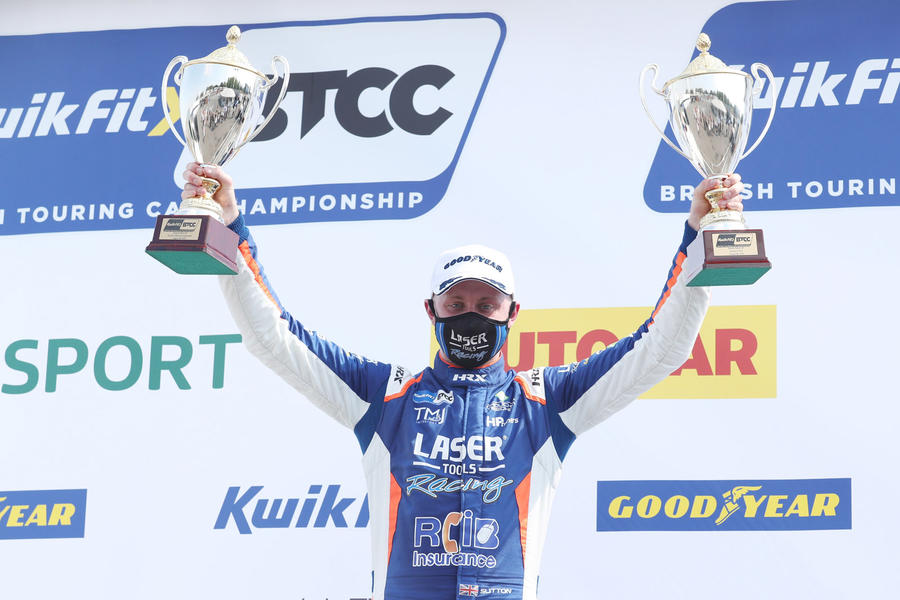 The 26-year-old has a strong history in rear-wheel-drive BTCC machines. After spending his maiden season in 2016 in an ageing MG 6 GT, he was in the right place to capitalise on BMR Racing’s building of a rear-driven Subaru Levorg GT. He took the controls and powered the estate-shaped 2.0-litre turbocharged car to overall glory in only his second season at the top level.

His prowess behind the wheel is undoubted, as is his affinity with rear-wheel-drive machines. His alliance with Laser Tools Racing for 2020 might have been a marriage of convenience, but it was one that suited all parties. It has led him to the point where, after the opening meeting of 2020 at Donington Park, he declared the Q50 as the greatest BTCC car he had yet driven.

“Getting in the car is like putting on a pair of trousers that fit perfectly for me,” he says. “The car does just what I want it to.”

Sutton was part of the plan to refresh the Infiniti effort and was in at the ground floor. “I would go to the workshop, help with the body panels, spanner, do everything,” he says. “I wanted to know the car from the ground up, and that’s what I’ve got.

“This simply is the best touring car I’ve ever driven, because it does exactly what I want. When I say best, I mean it reacts the way I want, and that’s in the wet or dry. I have full confidence in it, and that’s down to the engineering brains behind it and the momentum we have behind us. I have no doubt we will succeed.”

The seeds of the modern-day Infiniti campaign can be traced back to that disastrous 2015 attack, although underpinning it is a very fresh approach and machine.

Laser Tools Racing team principal Bob Moffat, who is the father of Sutton’s team-mate, Aiden Moffat, explains that the old Pro Motorsport Infinitis were meant to be nothing more than show cars, rather than spark a whole change of direction for the Livingston-based team. 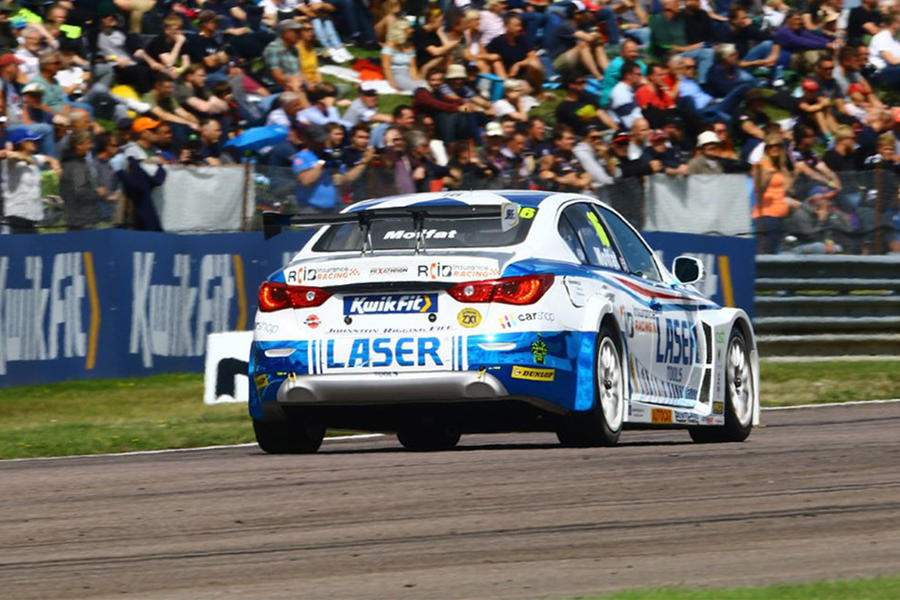 “I opened a new business for Aiden called Raceworx,” he says. “It was based in Livingston and did tuning, rolling road work, mapping and custom exhausts, and we specialised in doing Japanese and German cars.

“I knew [Pro Motorsport boss] Derek Palmer, and he told me he still had his Infinitis. I didn’t put any real value in the cars, because they were both fitted with the older-spec [control] GPRM components.

“But I decided to buy them; Aiden and one of the lads from the workshop were going to go up to track days at Knockhill and use them as mobile advertising boards for the Raceworx firm. That was it.”

At that stage, Moffat Jr was running a Mercedes-Benz A-Class in the BTCC but struggling for consistent results. The Laser Tools team, which had run under the wing of the Ciceley Motorsport operation, took preparation in-house at the start of 2019 and was using engineers from Italian brain trust Hexathron Racing Systems. As part of that deal, engineer Federico Turrata went to Laser Tools’ base in 2019 to help perform a midyear revamp on the German hatchback – but something else caught his eye.

Moffat Sr explains: “When Federico came over, he asked why we were working on the wheelbarrow – which is what we called the Mercedes – when we had two other race cars there.

“He asked if we could put the Infinitis up on the ramp. He was taking pictures underneath and measurements. I told him the cars had been built for a day gone by. Turrata said we simply had to bring them out and race them.”

Moffat Sr didn’t need much convincing and, with results from the A-Class still hard to come by, the green light for a full rebuild with the modern-spec RML control parts was given halfway through 2019.

But there was another piece of the jigsaw that had to fit into place, and that was Sutton and BMR. Moffat knew that BMR was unlikely to continue fielding its Levorgs in 2020 and had already been in contact with team chief Warren Scott. That led to the Q50 programme ramping up even further.

As part of the ongoing talks between Laser Tools and BMR, Sutton was drafted in to test at Snetterton the first version of the Infiniti, the reworked 2015 car, and he was immediately impressed.

While Moffat Jr got to grips with his first rear-wheel-drive race car during the latter part of 2019 (including taking the Q50’s first podium at Silverstone that September), there were other plans afoot after an affinity was formed between BMR Engineering, as it’s now known, and Laser Tools.

Moffat Sr says: “We realised that we had the makings of a good car with the Infiniti, but it wasn’t going to be that [older] car. Antonio Carrozza [Sutton’s trackside engineer from BMR] put in a lot of work; he designed a new version and worked on it with chassis-builder Willie Poole and the TOCA technical team.”

That brand-new Q50 ran for the first time at the 2020 BTCC media day test session at Silverstone in March, but the pandemic-induced hiatus before this year’s competition got under way left the crew with even more time to refine the chassis. Far from being a reworked version of the Pro Motorsport examples, these were brand spanking new, shiny race cars. 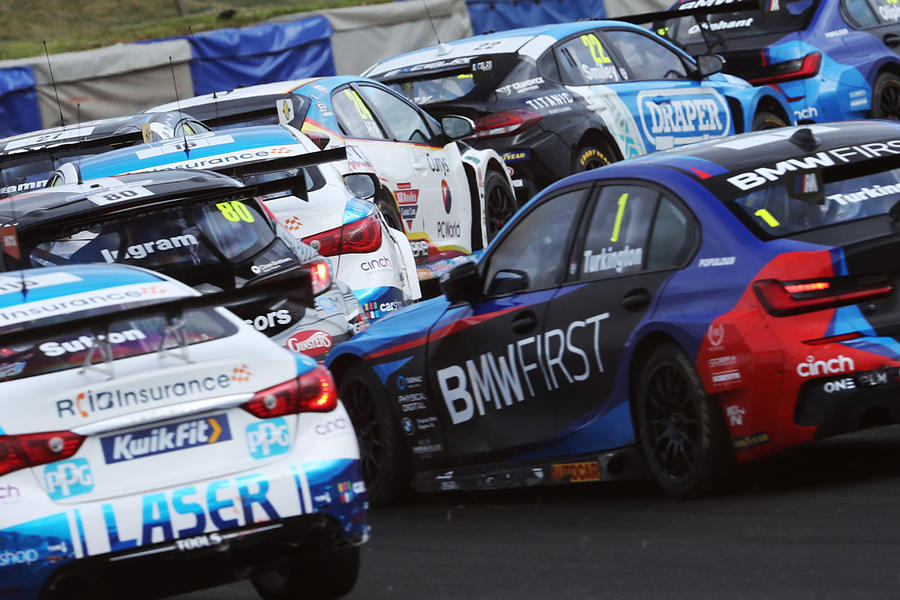 To take the fight to WSR and four-time title winner Turkington still requires a lot of effort, but the potential of the Infiniti, first seen in Scotland, is now turning into results.

It has similar dimensions to the 330i M Sport, although Moffat Sr says this wasn’t on the radar when the project was given the green light.

“When we looked at it, we thought it was better than the BMW,” he says. “We were pleased with the aero figures and we loved the engine position and the gearbox. We weren’t looking at the car because it was close to the BMW, though; we only ever looked at it on its own merits.”

The Infiniti has ripped up the track so far, thanks to the efforts of Sutton and Moffat Jr. Laser Tools is leading the Independent Teams Trophy standings and Sutton heads the chase for the Independent Trophy runners.

One curiosity, though, is the fact that the public can no longer buy a Q50 for the road, because Infiniti withdrew from Europe at the start of this year. The BTCC has rules about the age of the models competing, and the lifespan of any car is only five years since it was homologated and available on general sale – which is a process that Laser Tools Racing went through in January, right on the cusp of the time period when the Q50 was still a viable BTCC proposition.

Those BTCC rules are in place to mean that kit isn’t immediately redundant once the model isn’t in showrooms any more, and it means that the privately run teams can field older, therefore cheaper, machines.

“We were aware that the Q50 wouldn’t be sold after the start of 2020, but we got the homologation done, so it’s fine,” says Moffat Sr. “To be honest, five years is long enough for any car. After that, it’s going to be tired and it will need a change.”

With the work that Laser Tools and BMR have done in the background, there’s no chance of the Q50 feeling tired any time soon – and that could just prove the thorn in BMW’s side in the chase for 2020 honours.

Cars that pushed the BTCC rules

Holden SS Commodore, 1987-1988: The Group A regulations that dominated touring car racing in the 1980s were very different from those of today. If a car was created to those regulations and was homologated in any country, it could then be used around the world. That was what brought this V8-powered Holden monster, driven by Mike O’Brien, to British shores in 1987 and 1988. The Australian saloon was a real curio among the European heavy metal.

Ford Merkur XR4Ti, 1985-1986: Ford was aware of the importance of its cars’ sporting success in the 1980s, and knew that tin-top victories were crucial. When trying to dig the Sierra out of its jelly-mould reputation, it decided that a race programme was the way forward. The underpinnings of what would go on to become the iconic Ford Sierra RS Cosworth (and then the RS500) would be the American-imported Merkur, dubbed the XR4Ti. It was a mobile test bed good enough to take Andy Rouse to the title in 1985. 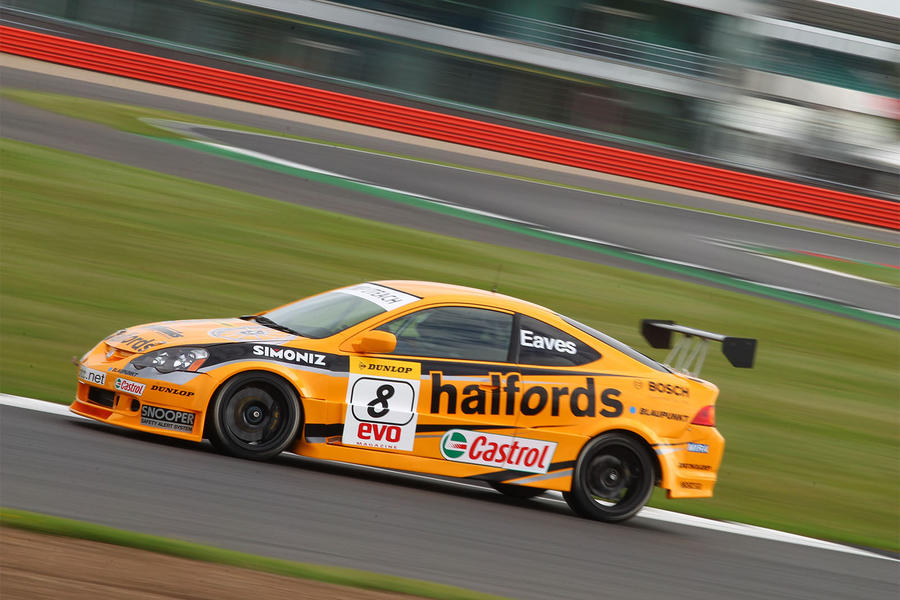 Honda Integra Type R, 2005-2011: This was the machine that actually prompted a rule change in the BTCC. When Team Dynamics fielded the Honda Integra Type R, Matt Neal took it to two titles in 2005 and 2006. However, the Japanese car wasn’t on sale in the UK, so rivals were immediately up in arms. When the modern NGTC rules were introduced in 2010, a clause was put in place to stop such things happening in the future.

How to build a BTCC race engine