BACK TO ALL NEWS
Currently reading: Used car buying guide: Lotus Elan S2
UP NEXT
Official: Bristol Cars revival to be led by new Buccaneer EV

It’s the Cinderella of British sports cars, the one polishing the taps, ironing the smalls and emptying the dishwasher while its sister, the Elise, enjoys the limelight.

It is, of course, the Elan two-seat roadster. Not the legendary first-gen car from the 1960s, but the so-called M100 series launched in 1989, coincidentally the same year the Mazda MX-5 Mk1 came out.

It was unfortunate timing. While the Mazda ironically borrowed much from the original Elan, in particular its longitudinal front-engined, rear-drive layout, the new M100 had its engine across the front wheels and was front-wheel drive. Purists were naturally upset, but a test drive usually won them over.

The new car, which at least followed Lotus principles in having a lightweight composite body attached to a rigid steel backbone chassis, was funded by General Motors. The US giant also had a share in Isuzu, the Japanese car maker which supplied the Elan’s impressively reliable engines: a choice of 1.6 naturally aspirated and turbocharged units, both heavily modified by Lotus. The former produced 128bhp and the latter, badged SE and easily the more popular, a useful 163bhp. For a time sales were strong, helped by rave reviews from no less a magazine than this. It was all in vain. The car’s less than spectacular looks, high production cost and that perverse layout slowly did for it, and GM pulled the plug in 1992.

These first-gen Elans are called Series 1s to distinguish them from the S2s that followed in 1995 after Bugatti bought Lotus and, on discovering a stash of surplus engines, gave the car a second chance. At the same time the handling was sharpened slightly but power knocked back to 156bhp due to the fitment of a catalytic converter. Even so, these rarer S2s now fetch a premium over the more plentiful S1, but ultimately condition is king.

All too soon there were no more engines and S2 production ended, only to be revived briefly when Kia bought the rights to the model and dashed off a few examples for the Korean market.

Forward to today and, thanks to Isuzu’s engines and GM’s cash, the model has weathered the passing years surprisingly well. ‘Buyer beware’ (see below) highlights a few things to watch for, but if you find a cherished example with a good history, it should serve you well. It certainly won’t feel as baggy as early Elises can.

And just look at those prices. They top out at around £12,000, about where the Elise starts. In fact, £7500 to £10,000 is enough to get behind the wheel of a keeper in need of little attention apart from fresh oil and a new filter on the dot.

Will prices rise? Specialist Vincent Haydon reckons that as long as Elise values increase, Elans are sure to, but he warns against restoring a barn find at great expense. The model’s just not there yet. Perhaps one day… 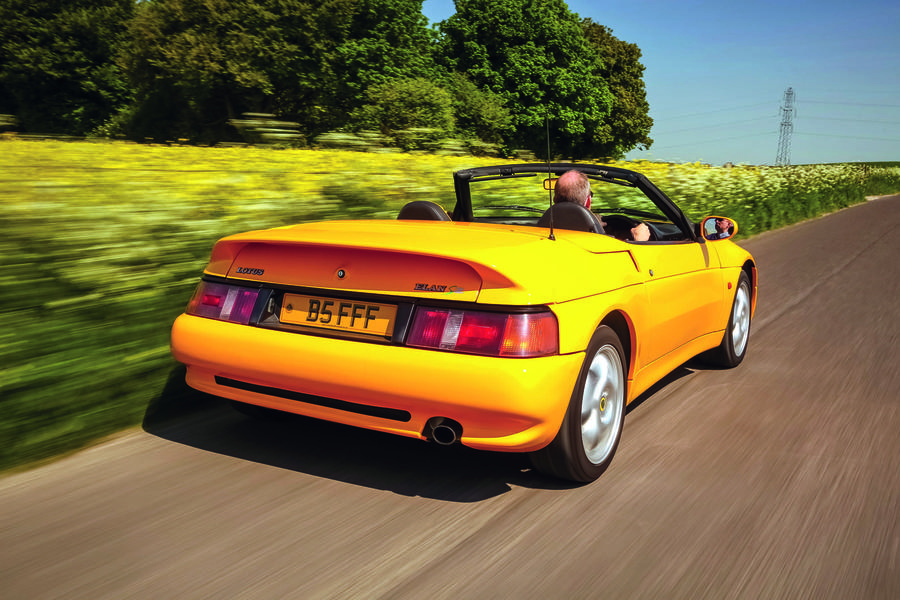 Vincent Haydon, Vincent Haydon Cars: “As a former Lotus dealer I well remember the Elan. There was a huge push on the Esprit with sales incentives and all sorts, but any objection to the Elan being front-wheel drive was easily countered by giving a customer the keys to the demonstrator. They’d come back with a huge smile and we had another sale in the bag. It helped, too, that it had an Isuzu engine, because people knew it wouldn’t go wrong. Today, they’re a bargain. From £7500 to £10,000 will get you a tidy one with a solid history – and it must be solid because they do like their oil changes.”

■ Engine: The Isuzu engine is bulletproof if regularly serviced. Evidence of fresh oil and a filter every 6000 miles is essential. Check coolant hoses for leaks and clips for corrosion.

■ Gearbox: Another toughie, with synchro problems largely unknown. Linkages can wear, especially the ball link at the end of the shift cable – it can become disconnected. Feel for clutch slip: if it bites close to the top of the pedal’s travel, it’s on the way out.

■ Suspension and brakes: Check rear suspension for corrosion caused by moisture between it and the body (we saw an Elan with newly fitted galvanised wishbones, which are a good mod). Otherwise the suspension is tough, although at this age you can expect to find the odd leaky damper or broken spring. Wheel geometry is adjustable all round, so uneven tyre wear may suggest it needs a tweak.

■ Interior: Quality here lags behind the rest of the car thanks to low-rent GM parts. At least spares are freely available. Leather trim was below par and expect to have to retrim the driver’s seat. 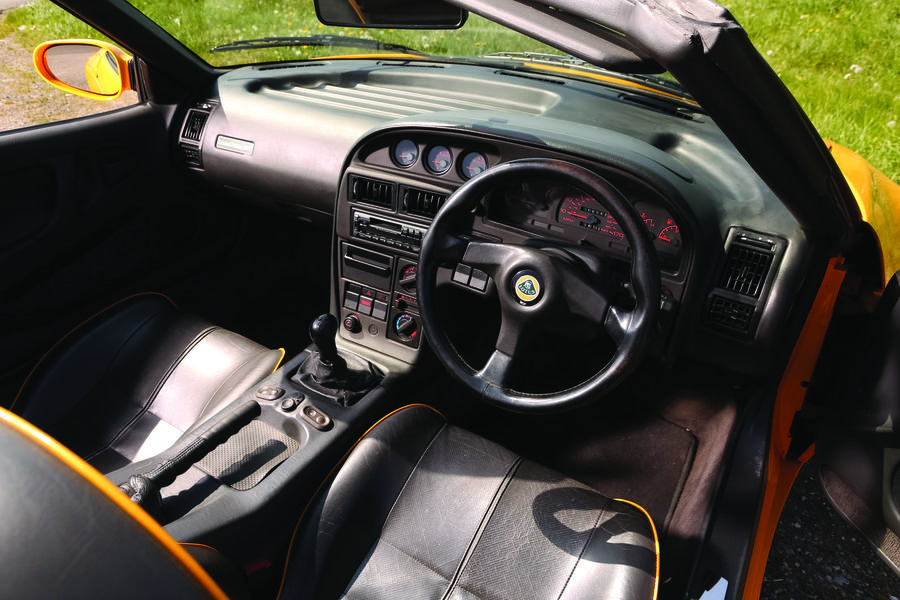 ■ Body: Paint crazing is rare so any you see may be repair-related. Shutlines are generally good and a wayward door or bonnet may just need adjusting. Check for worn door and boot seals, which will let in water.

■ Roof: Check for a warped frame and general wear and tear. It should sit properly, but even then it’s likely to let in rain.

For the Elan driver who has everything, how about that final touch: the Lotus certificate of provenance? For around £50 the company will send the lucky recipient a certificate detailing essentials including engine and chassis numbers, build date and original supplying dealer. An extra £30 buys additional info, including numbers of cars in the same colour and trim. Visit lotuscars.com for more information. 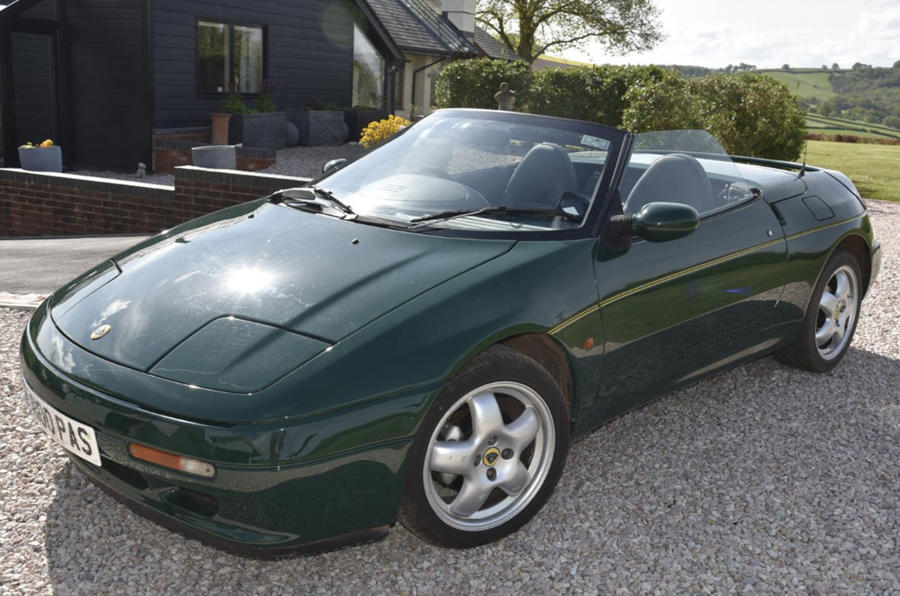 Our best times behind the wheel of a Lotus​

I am showing you guide which is about how to buy used car. Here are all the way and all the guide which help you to easily see essayninja which tells you all about the car and something more which is good for you. Hope after take help from here you can easily buy car from here.
si73 9 September 2019

I never got the comments

I never got the comments about questionable styling as I've always thought it's a great looking car, I must be in the minority though as most reviews comment negatively on its looks, though as a driver's car it is always very highly rated, I'd imagine the price will rise, more than likely before I am able to afford one.

Boy how diferent things would have been if the engine was the other way round and it had been rear wheel drive!

Boy how diferent things would have been if the engine was the other way round and it had been rear wheel drive!

Yeah, things would have been different - front wheel drive cars would not have been as good as they are now.