BACK TO ALL NEWS
Currently reading: London calling: Jaguar Racing's quest for home glory in Formula E
UP NEXT
Lamborghini to prioritise unexpected specials over retro cars

After a period in the doldrums, a resurgent Jaguar will gun for glory at this weekend’s returning London e-Prix – the team’s first home race for 17 years
Open gallery
Close

It has been a long time since a works Jaguar team has had the chance to compete in a home race. Seventeen years, to be exact, dating back to the 2004 British Grand Prix at Silverstone, when Mark Webber and Christian Klien finished an uninspired eighth and 14th.

A few months later, Jaguar’s owner at the time, Ford, would pull the plug on its overspending yet underachieving Formula 1 squad, selling it to Red Bull. It’s hard to know what would have seemed less likely in 2004: an energy drinks firm turning that middling outfit into a powerhouse or Jaguar’s next home race coming in an all-electric series.

Since 2004, of course, the automotive world has embraced electrification and, in turn, the ABB FIA Formula E World Championship. So with Jaguar (now owned by Tata) keen to showcase its EV technology to support the launch of the I-Pace in 2016, the single-seater championship was the natural choice. And with the London e-Prix making an overdue return to the calendar this weekend, Jaguar Racing is finally coming home.

“As a proud British manufacturer, it’s going to be a huge event for us,” says team boss James Barclay. “If you look at where Formula E races, London has been conspicuous by its absence. So much happens in this country in terms of motorsport. We’re based in and spend a huge amount on research and development in this country, and to be able to race at home is something that we’re really passionate about.”

In a way, the time it has taken Formula E to return to London (the race in Battersea Park fell off the calendar after season two in 2016) means Jaguar heads into this weekend believing drivers Sam Bird and Mitch Evans can fight for victory. 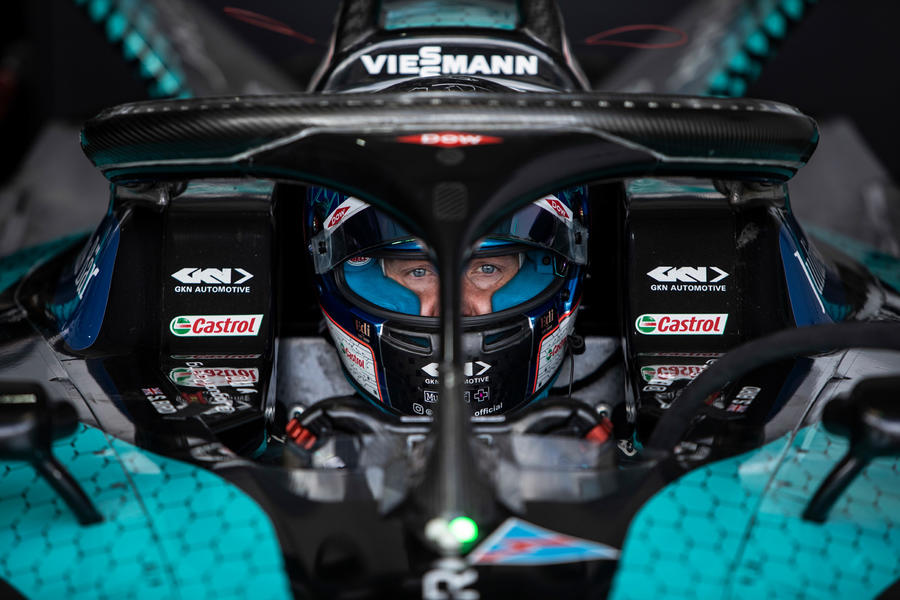 That certainly wouldn’t have been the case when Jaguar entered Formula E in 2016. It struggled in its first two seasons, and although it took a step forward with wins in 2018/19 and 2019/20, it’s only this year that it has truly become a consistent frontrunner. After taking his second win of the year in New York City recently, Bird leads the drivers’ standings, with Jaguar the third-placed team.

“We knew that it was going to be about steady progression,” says Barclay, noting that Jaguar’s team is run in-house (in partnership with Williams Advanced Engineering and based near that firm in Grove, Oxfordshire), whereas most other manufacturers employ a motorsport division.

“When we entered in 2016, we hadn’t been involved in motorsport for a very long time: even in the F1 days, the team was really a separate thing,” Barclay continues. “Once we had sign-off from the board, we had to create a whole new structure and build the whole thing from scratch. We had to take massive steps to catch the likes of Audi, BMW, Mercedes-Benz and Porsche: they’ve always had some form of racing programme. So, being honest, the timeline is what we were expecting.

“The first year was just about learning how to race again. Year two was starting to compete, year three fighting for points, year four going for podiums and then year five going for wins. We’ve always been super-clear about not overpromising and underdelivering in the world championship with the best line-up of manufacturers.”

Evans has been part of Jaguar’s team since day one, and the 27-year-old Kiwi took its first win in 2019. “The contrast between the first season and now is huge,” he says. “We’re a completely different team and operate at a much higher level. It has been really special for me: it’s rare for a driver to be able to experience that growth. The team has always been realistic, and the timeline has played out exactly as was set out to me.”

Bird, who is second on Formula E’s all-time winners’ list, joined this year from Envision Virgin Racing. He says the lure of racing for a British manufacturer “was a big part of the move for me” and admits he came close to signing three years ago. Although that didn’t work out, he says: “Over the past three years, they’ve got better and better. In one race last season, I watched Mitch fly past me on the straight as if I was standing still, and that was a switch in my head: it was time to make the move. And I’m so pleased I have.”

The slow growth of the team has in part been because Jaguar wanted to learn as much as win. “Formula E is genuinely a real-world proving ground for us,” says Barclay. “The point of doing it was firstly to tell the world we had an electric car and EV expertise, and a medium- to long-term view that we would learn about electric technology.

“I can honestly say that has been the case. If you look at the four-year development cycle of road cars, you can see the advances we’ve made: we increased the range of the I-Pace with lessons we learned in Formula E and the I-Pace eTrophy about thermal management of batteries. In racing, you operate closer to the margin than you would with a road car, so you learn more at that limit.” 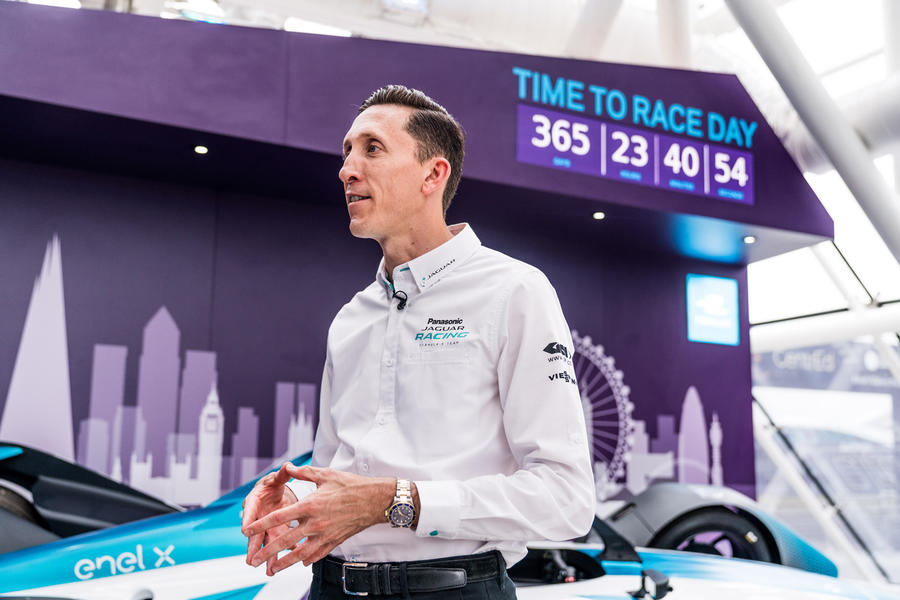 As a further example, Barclay cites a new rule that permits teams to introduce software updates between each race. “It’s like an iPhone: the cars get better with each update, and we can adopt that development cycle for over-the-air updates of the I-Pace,” he explains. “So racing benefits our customers. Jaguar’s ethos has always been that way. The C-Type was the first car to use disc brakes, for example.”

One challenge for Formula E manufacturers is trying to show that constant development. With all teams required to use a spec chassis, the cars all look the same, which disguises the intense work all the manufacturers are doing to develop their powertrains. Jaguar has introduced a new powertrain for each season, with more than 1000 components changes made before this one.

“The fundamental philosophy of Formula E is on improving efficiency, so the driver is trying to make a powertrain that is as efficient as possible,” says Barclay. “The more energy you’ve got, the faster you can push. You need a car with good one-lap pace and that’s up there efficiency-wise.”

And while Barclay’s team is focused on winning races and titles, the ultimate goal for Jaguar is to accelerate its learning of EV technology. And that’s going to become more important as it transitions to an electric-only premium brand by 2025 under new boss Thierry Bolloré’s Reimagine strategy.

But while Jaguar is undergoing a wholesale reinvention, Barclay is adamant that its bold new future will include Formula E. Noting that the firm has already committed to the forthcoming Gen3 regulations, he adds: “Formula E very much points to what we’re moving towards with our Reimagine future. It’s a proof point of our EV technology and capability and of our commitment to sustainability.”

Several of Jaguar’s premium rivals are already moving on from Formula E, but Barclay insists that “it’s natural in motorsport to have some teams come and go”. He adds: “We’re dedicated to one programme and we don’t do anything else. Our single focus is here.”

There are no guarantees in motorsport, of course. But with the London e-Prix on next year’s calendar, don’t expect this weekend’s event to be Jaguar’s last home race for another 17 years. 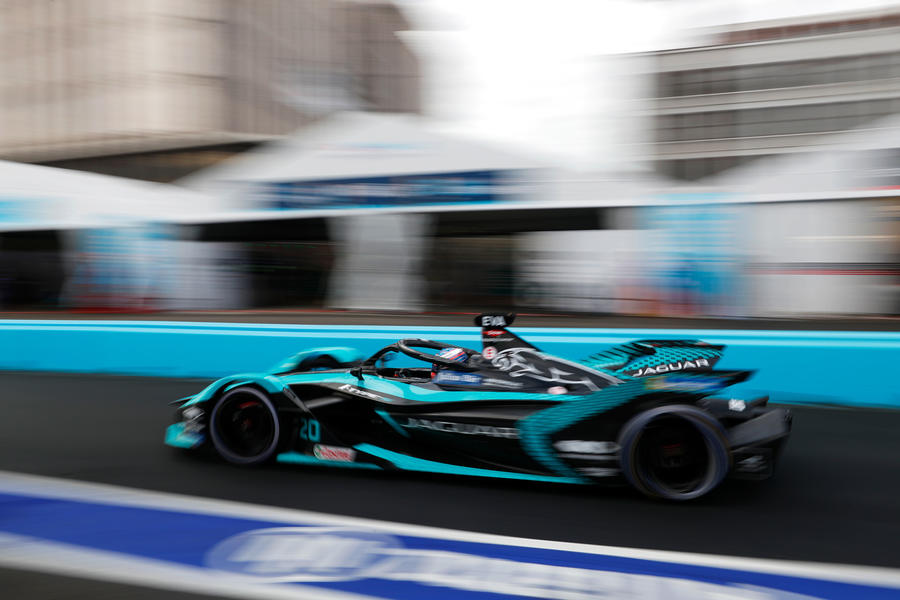 With electric cars creating new opportunities, Formula E has staged races on temporary circuits in some unusual locations. But this weekend’s London e-Prix might well be the most bizarre of the lot: the 1.39-mile track actually runs through the exhibition halls of the Excel centre in the capital’s Docklands.

The main straight and first complex of turns will be inside the vast halls, before the track heads out onto roads around the perimeter of the building. The main spectator area, along with the team base, will also be indoors.

The event is the first time that the UK has featured on the Formula E calendar since the 2015/16 season, when the London race was held on a tight track around Battersea Park. After various complaints, that venue was axed, and Formula E has struggled since to secure a new London location.

Excel had been due to host the race last year but suddenly became unavailable when it was (again, bizarrely) turned into a temporary NHS hospital, due to the Covid-19 pandemic.

Jaguar to become all-electric brand from 2025​

McLaren Racing secures option to race in Formula E in 2022​