BACK TO ALL NEWS
Currently reading: Tokyo motor show 2013 preview
UP NEXT
Nissan will build batteries in UK to sustain Sunderland plant

Autocar's team of roving reporters will be bringing you the very latest from the show floor, but here's our pre-show roundup of what to expect at the event in 2013.

And remember, you can keep up to date with all the latest show news at Autocar.co.uk.

At the same time as Honda announces its S660 concept, Daihatsu responds with this new Kopen model. Built around the same Kei-car principles as its predecessor, the Kopen concept features a 660cc engine mated to a CVT paddle-shift gearbox.

This Japan-only concept is a traditional Kei-car with a modern take. It's expected to take on the Beat name and kick-start its rivalry with the Daihatsu Kopen when the production version launches.

The latest generation of Honda's personal mobility concept is able to travel at up to 3mph for up to three miles, and weighs just 25kg.

This all-new concept two-door coupé is designed to introduce a new generation of buyers to the Lexus brand. Taking some of its styling cues from the LF-LC concept seen in Detroit last year, the RC will be shown with both V6 and hybrid powertrains.

A new plug-in hybrid SUV from Mitsubishi which will use the firm's all-wheel drive system. It'll also offer wi-fi support for drivers as well as the latest safety tech.

Taking the plug-in hybrid platform even further, this compact SUV is focused around nimble handling and coupé style. It's expected to form the basis of a replacement for the ASX crossover.

The AR marks the return of Mitsubishi to the MPB segment following the axeing of the Grandis in 2011. It uses the same hybrid powertrain as the XR-PHEV and includes seating for up to seven passengers.

Due to join the new Honda NSX and Lexus LF-CC racers in the 2014 Super GT Championship in Japan, the GT-R Nismo GT500 has been developed jointly with the Williams F1 team. It's expected to get a power boost and plenty of extra aerodynamic tweaks.

Radical new electric sports car from Nissan will sit below the 370Z in the firm's product lineup. A test mule based around the Ariel Atom is already up and running.

There's more power and some subtle styling changes for the revised Panamera Turbo S, which will go on sale in February next year following its reveal at the show. 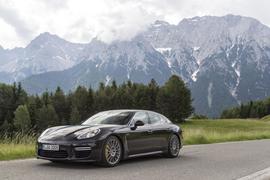 The full styling details of this radical sports tourer concept from Subaru are still unknown, but we do know it'll lead a three-strong concept lineup from the firm. It uses a horizontally opposed 1.6-litre direct-injection turbocharged boxer engine for power.

A new compact crossover design from Suzuki, which is destined to act as an alternative to the Regina/G70 concept seen in 2011. It's compact-car size and gets a new three-cylinder 1.0-litre engine.

The X-Lander rides on the same platform as the Suzuki Jimny, and is powered by a 1.3-litre engine in combination with an electric motor. It offers four-wheel drive and is connected to an automated manual gearbox.

Suzuki describes the Hustler as a crossover for the minicar segment, and with it comes plenty of SUV-esque styling and a large interior. No powertrain options are known at the moment, though a coupé version of the Hustler will also be shown.

The Aqua Air kicks off a large range of concepts from Toyota for its home show, and presents an open-top concept of the Aqua hybrid hatchback.

Toyota's all-new hydrogen-powered concept is already slated for production in 2015. Designed to carry up to four people, the exterior shape of the FCV is meant to remind drivers of flowing water.

This radical urban mobility concept will be shown for the first time in Tokyo, and is meant to showcase driving fun. Doing without a traditional steering wheel, the FV2 instead relies on the driver moving their body to change direction.

As its name suggests, this is Toyota's vision for the next generation of Japanese taxis. Powered by a hybrid LPG powertrain, the concept features seating for up to five people.

We may have seen the FT-86 before, but Toyota is promising a range of changes for this Tokyo concept, with the firm apparently gauging reaction to the open-top sports car.