Suzuki's Air Triser - a new compact MPV concept - has been revealed at the Tokyo motor show.

The concept is designed to 'embody the concept of a private lounge', and features a reconfigurable seating layout. Its three rows of seats can be configured into a sofa-style shape when parked, with multimedia content being played on an extendable screen.

Suzuki says the concept's layout 'enables users to enjoy their time together not only on the move but also while they're stationary'. The cabin is accessed through two sliding doors.

Like the other Suzuki concepts in Tokyo, the Air Triser features a minimalist interior design, with an entirely digital dashboard and a small central infotainment screen.

Although Suzuki hasn't revealed details of the Air Triser's powertrain, it's likely to use a small-capacity petrol engine coupled with an automatic transmission.

Suzuki is also showing its Mighty Deck concept in Tokyo, as well as its new Ignis hatchback. 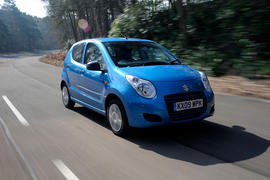 The Suzuki Alto proves that cheap motoring can still be fun, but the hotly contested supermini class is filled with better equipped rivals