BACK TO ALL NEWS
Currently reading: 2017 Land Rover Discovery - video, specs and prices
UP NEXT
Ford backs call for European ban on new ICE cars from 2035

The all-new 2017 Land Rover We've driven an early prototype of the 2017 Discovery is faster, lighter, more economical and cleaner-running than the model it replaces, even though it is bigger inside and out.

Its sleek and curvaceous lines deliberately ditch the square-jawed toughness of the outgoing Discovery 4 to make way for the first of the new Defender family, promised for 2018-2019.

The new Discovery’s 20% weight saving is the result of Land Rover’s decision to ditch the tough but heavy steel ladder chassis of previous models in favour of a riveted and bonded aluminium monocoque shell, widely adopted across the rest of the Jaguar and Land Rover ranges.

The change means the Discovery can now be made alongside the Range Rover and Range Rover Sport, beginning life in JLR’s vast aluminium bodyshop in Solihull.

Land Rover says it has designed the new Discovery from the inside out to provide adult-size seating for seven and adhere to the established Discovery tradition of ‘stadium’ seating, whereby the second and third rows of seats are positioned higher than the one in front. The seats are power-operated and can be remotely configured in a variety of positions, either via the fascia’s 10.0in touchscreen, by controls inside the tailgate aperture, or, uniquely, with a smartphone app.

The emphasis on interior space has encouraged the designers to stick with the Discovery’s traditional stepped roofline, which provides enough head room for all but the tallest 5% of adults in the third row of seats.

Luggage space is more generous than ever, and the Discovery returns to a one-piece tailgate, albeit a top-hinged design rather than the side-opening model of the first and second Discovery models. There’s now a powered loading platform that slides out to provide the comfortable table-cum-seat the previous model’s lower-half tailgate offered. When the tailgate is closed, the same panel can stand vertically as a load divider.

The push for improved cabin space drives the new Discovery’s 140mm increase in overall length (to 4970mm) and the 40mm increase in wheelbase (to 2923mm), but the move away from a twin-rail chassis allows a lower floor and therefore a 40mm reduction in roof height, even though the ground clearance actually increases by 43mm and the wading height improves by 200mm to a class-best 900mm.

To improve things further, the all-independent self-levelling air suspension can be lowered by as much as 40mm at rest to an “access height” that facilitates entry or loading. 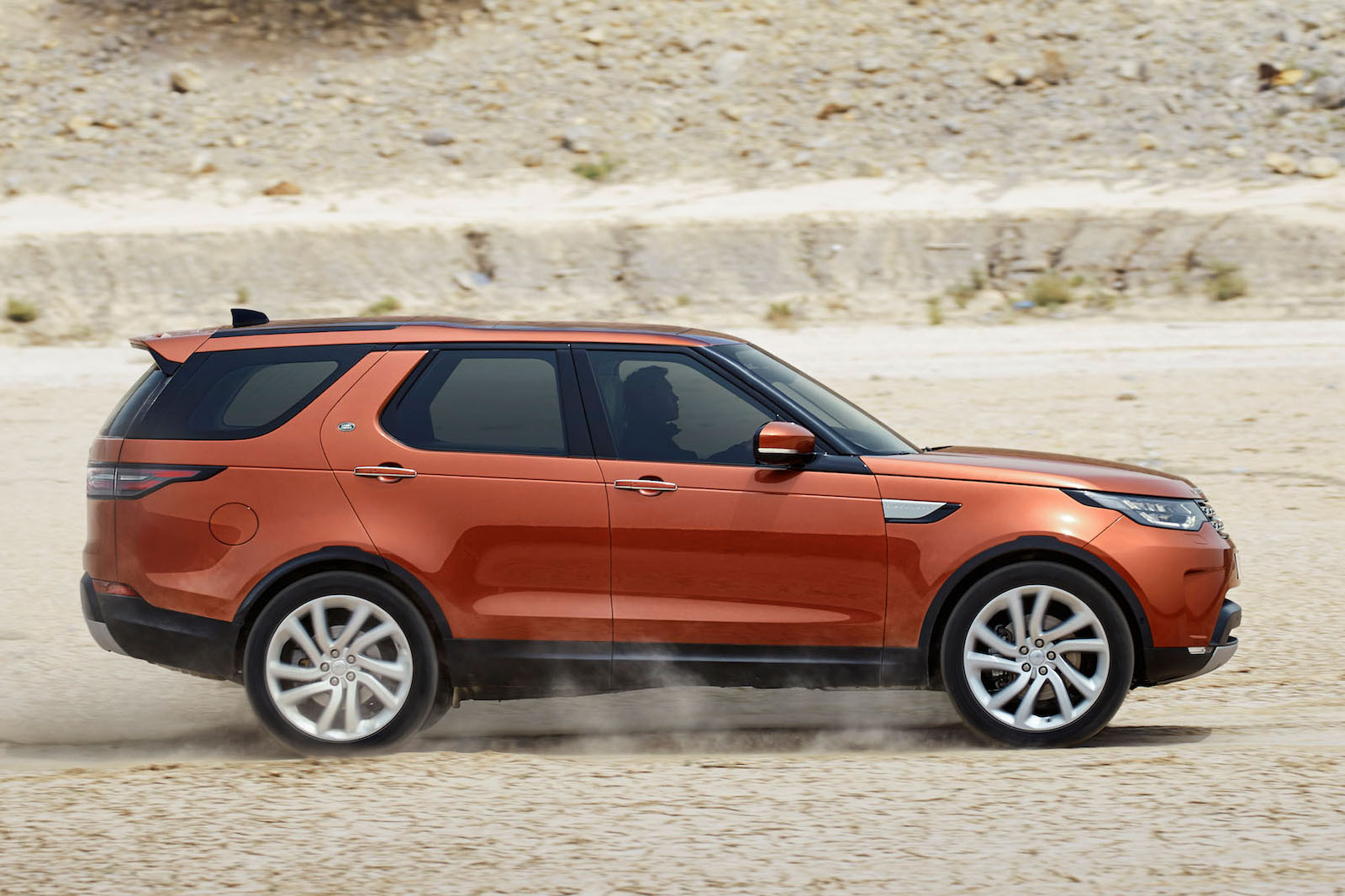 All powertrains are paired with an eight-speed ZF automatic gearbox. The entry-level engine is a new 237bhp twin-turbo version of the 2.0-litre Ingenium diesel. It delivers a claimed combined fuel economy figure of 43.5mpg with a CO2 output of 171g/km but will still propel the newly lightened Discovery to 60mph from rest in a brisk 8.0sec.

Land Rover says the Discovery is its most capable off-roader yet, with its ability enhanced by the lighter weight, better ground clearance and improved wading ability.

It still uses a transfer box to provide a separate low range of ratios for extreme off-road use and has a standard 50/50 torque split. However, torque can be varied electronically either via the latest Terrain Response 2 system (which provides a variety of off-road configurations on a console-mounted dial control), or the system will configure itself automatically using information from sensors that monitor road and driving conditions.

A recent Land Rover refinement is All Terrain Progress Control (ATPC), which lets the driver select an appropriate crawling speed for very tough or low-grip conditions, to concentrate entirely on the steering.

There are four equipment levels - S, SE, HSE and HSE Luxury - and prices range from £43,495 to £65,695 before the addition of optional equipment, of which Land Rover offers a bewildering array. Wheel sizes start at 18in on the S model and proceed through 19in and 20in to 21s on the HSE Luxury. And then there are 22in wheels on the options list.

Standard equipment in every Discovery includes seven adult-size seats, an automatic gearbox, four-wheel drive with high and low ranges, a 10.0in infotainment touchscreen on the fascia, a powered tailgate and autonomous emergency braking. 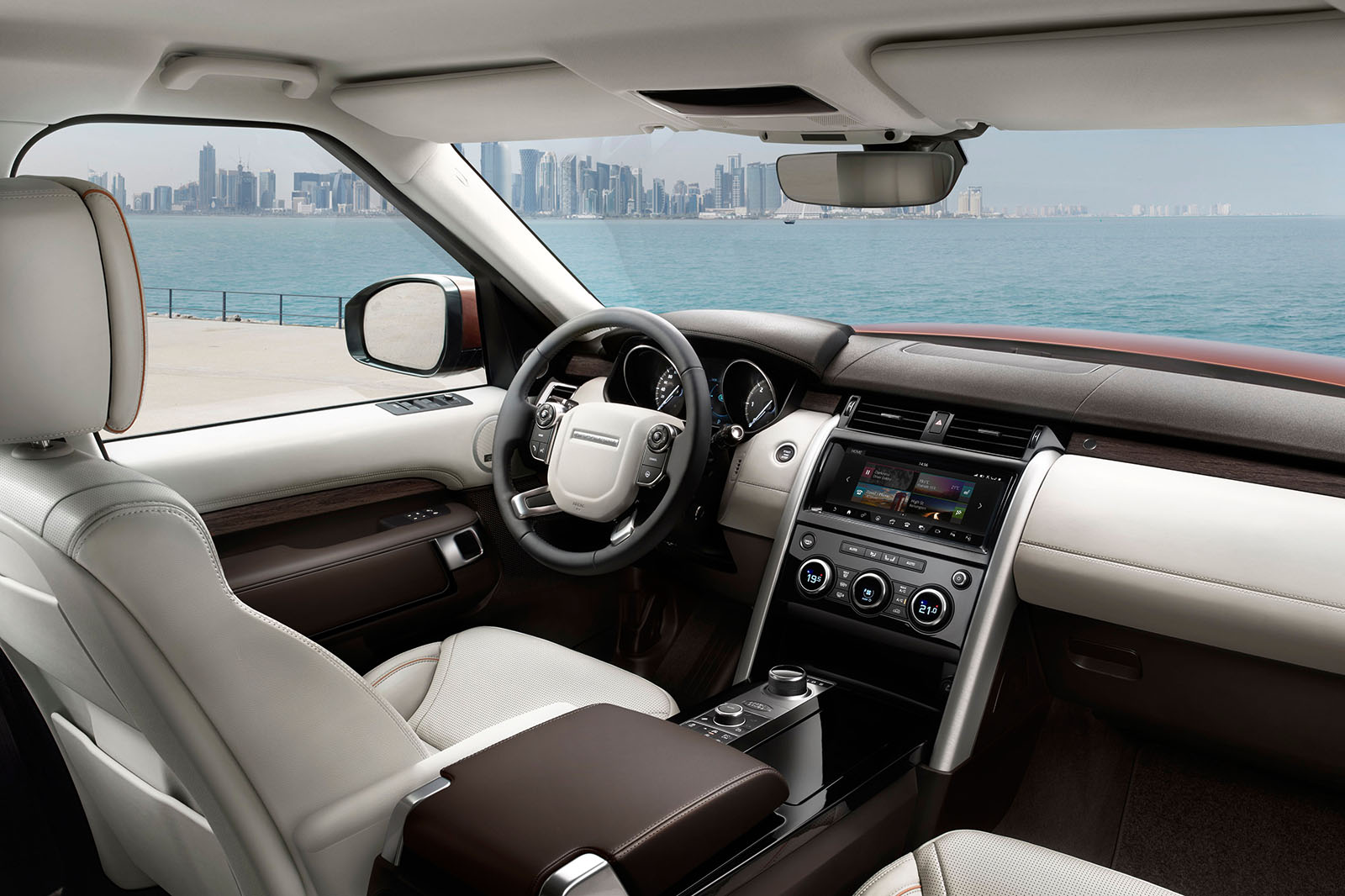 The plushest models come with up to nine USB ports, four 12V charging points and an in-car 3G wi-fi hotspot. The infotainment system – which extends to a top-line 17-speaker Meridian Audio system – is controlled from the 10.0in central touchscreen.

Reacting to concerns about the recent hacking of cars with remote keys, Land Rover has invented what it calls an Activity Key, which is carried on a wristband worn by the owner and, when in use, locks out all other keys.

The new Discovery will hit the market in next spring, with the first 600 vehicles specially badged as high-spec launch editions. There will also be an early ‘stealth’ edition, officially dubbed the Dynamic Design Pack, which comes with leather trim, sports wheels and pedals, privacy glass and special colours with a contrasting roof.

Land Rover is already confident about the Discovery’s prospects, having sold 1.2 million examples of its predecessors since the original model was launched in 1989.

“Demand has always been strong in our home market,” said JLR’s UK managing director, Jeremy Hicks. “We expect the new model to build on this, offering customers the most complete all-round SUV package available anywhere.”

CAP, which predicts the residual value of cars, states that the Discovery, which was only revealed late last month, should retain 59% of its value over three years or 36,000 miles of ownership.

For comparison, over the same period and mileage, the BMW X5 retains 52% of its value, and the Volvo XC90 holds on to 56% of its value. According to CAP's senior forecasting editor, Andrew Mee, the large premium SUV segment is one of the most lucrative for high-residual-value cars, along with the luxury car segment.

It’s not known yet if the Discovery’s strong initial residual value reflects its high level of differentiation from previous models or its strong impact since launch. However, depending on its sales success, residual values could go down if the used market becomes crowded with Discovery models.

Opinion: Why the Land Rover Discovery needs to be tough

As is his usual practice with JLR vehicles, Cropley writes with one hand in his pocket, but this jeep has such revolting and contemptible looks it must have been a difficult wank even for him. I'm glad I drive only cars.
Pierre 1 October 2016

That back end is a mess. It's a shame because the outgoing model was very successful and handsome blend of utility and elegance which made a virtue of its size and proportions. This does quite the opposite, though I haven't seen one in the flesh so I'll reserve final judgement until I do. But at the moment I am very disappointed indeed.
Spanner 30 September 2016

I am sure it will sell by the 1000. Everything is going bling, as it is a bigger market. Disco, very, in a 1970's sense, lots of glitter and spangles. Country? Not so sure. It does not appeal to me, but I am clearly a niche. I'll wait to replace my Disco 4 with a new defender, or if that goes bling, probably one of the new Merc pick-ups.
View all comments (34)