BACK TO ALL NEWS
Currently reading: New Land Rover Defender due in 2019
UP NEXT
Spending 48 hours touring in a Ferrari Roma

New Land Rover Defender due in 2019

The make-up of the next-generation Land Rover Defender remains shrouded in uncertainty, even though JLR sources admit that they need to get the model into production as a matter of the highest priority.

Officials won’t admit it, but they’re acutely aware of the enormity of replacing the 68-year-old icon. However, in the wake of the recent sale of the two millionth Defender (for £400,000) and the assembly of the last Defender at Solihull, officials have admitted that no one feels good about proceeding without the model in the range.

It is known that there will be more than one Defender model in future, with an insider describing the model line-up as “a small family”. It is certain to be related to existing product, as no other approach would be viable for a model that may account for only 50,000 sales a year. Indeed, there are murmurs that making the business case for a lowish-volume, relatively cheap car is one of the key hang-ups.

The required relationship with other Land Rovers makes an aluminium monocoque structure and skin a near certainty for the new Defender. There will be at least two wheelbases and several bodystyles, but not the profusion of both that have been possible with the outgoing model. All-independent suspension appears a certainty, as does a longitudinal engine with a 4x4 system featuring a low-range ’box and transfer case.

The Defender is unlikely to grow much bigger, with slightly expanded versions of the outgoing 90 and 110 models likely. It’ll be modern and simple in design, although not like the heavily criticised DC100 concept shown some years ago. Insiders say design director Gerry McGovern “now knows what the new Defender will look like”, although the final details are not complete.

It is probable that the new Defender won’t be available before 2019. One source suggests 2018, but this might be the debut date for a close-to-production concept whose function could be to lessen the waiting time.

There has been strong debate about the next Defender being made outside the UK, with proponents of the idea highlighting that in a global car industry, models “can be made anywhere”. The official line is that “things like that” are being evaluated right now.

However, the Defender has been portrayed as a British icon for 68 years and has always been made here, so there is understood to be resistance to moving production overseas, possibly to a new factory in Slovakia. More capacity in the UK might be found. JLR CEO Ralf Speth and his board are aware that the Defender is an all-British property and will only take production overseas with the greatest reluctance. 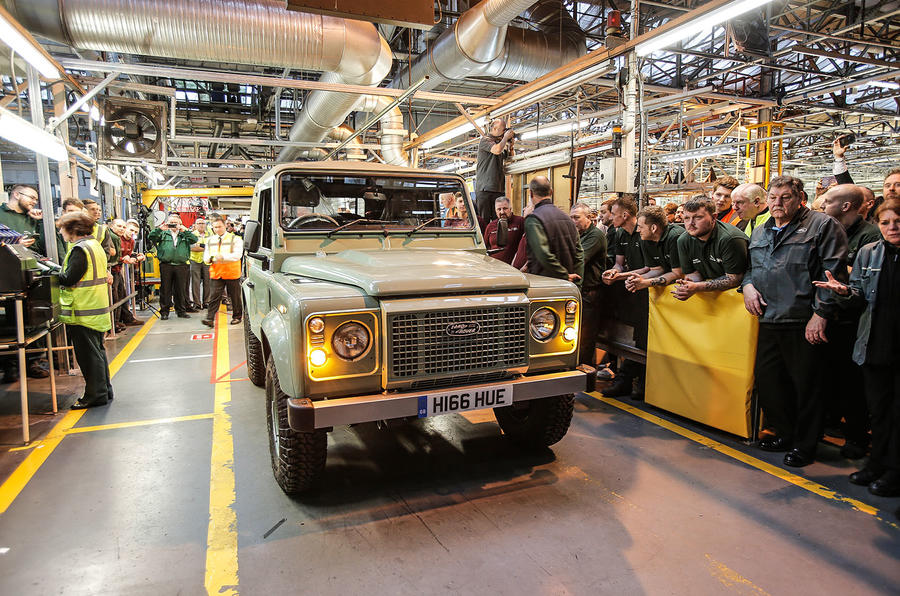 The Defender has been on borrowed time for years. Even its best friends knew it.

Its crash structure couldn’t meet modern regulations and its engines, while much cleaner than those used in the old days, couldn’t cope with requirements beyond Euro 6 regulations. Underpinning all that, the outgoing model was made by a clunky, labour-intensive process, and it was only selling 15,000 to 20,000 units a year, which would be disastrously uneconomic but for the fact that the tooling, suppliers and processes are remarkably ‘well oiled’.

For a new model at those volumes, they wouldn’t be, especially since the armed forces of the world who have huge stocks of spares and service personnel of their own - and have done much to sustain the Defender - couldn’t be depended on to transfer universally to a replacement model.

In the JLR backrooms, they know life would be easier without either the Defender or the need to provide a replacement. The trouble is, whenever you ask people what a Land Rover is, they point out, or sketch, their version of the off-road icon.

The Defender embodies much of the image that is carrying Land Rover towards 500,000 sales per year. But for the original ‘farmer’s toolbox on wheels’, there just isn’tthe demand there was. That’s the problem.

Gallery - the last Defender in detail

Saying goodbye to the Land Rover Defender - an Autocar special

Reminds me very much of a beautiful ahead of its time Toyota - or did I miss something?
foot of our stairs 2 March 2016

"But for the original ‘farmer

"But for the original ‘farmer’s toolbox on wheels’, there just isn’tthe demand there was. That’s the problem."

Combine sales of Ford 150 "truck", one of the best selling cars in the world with the Toyota Hylux and its clones.
Steve Copley's closing statement is simply wrong, People love the concept of a customisable shed on wheels. Makes them feel like they have proper jobs and make stuff, even if we don't

The association with Land Rovers and Farmers has been outdated for years. There are still farmers who use them but you're more likely to see Japanese pick-ups covered in cow pats these days! I know in the Yorkshire Dales plenty of farmers were getting sick of waking up to their Defender having its doors and bonnet stolen. You're more likely to see young Sloaney types driving Defenders now, usually dressed in pristine Barbours which have never seen the countryside. Something about 'aspirational lifestyles'.
View all comments (20)