The Infiniti QX80 Monograph is a design study that previews the marque’s next large SUV model which will arrive as a rival to the Range Rover and focus on the American and Chinese markets.

Revealed at the New York motor show, the design focus was to make the car as luxurious and as spacious as possible. The car's body takes the shape of a conventional SUV with muscular styling.

Infiniti's designers have applied a new language to the exterior, with a double-arch grille – something seen on the marque’s other models. 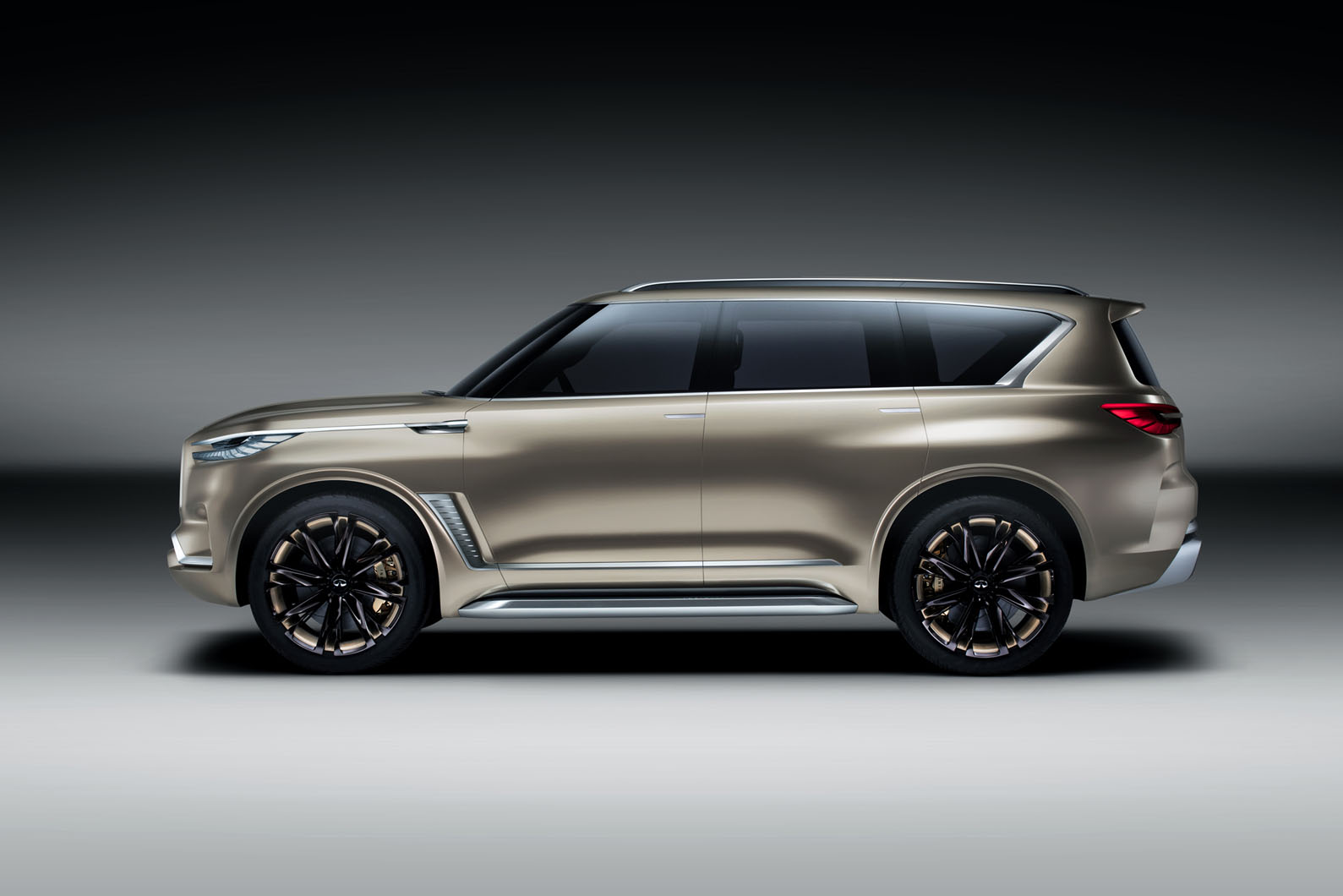 The car measures over five metres long, almost two metres tall and more than two metres wide, making it bigger than a Range Rover. To elongate the car, designers have used an unbroken, straight shoulder line that runs from the grille all the way to the rear. Its scale is emphasised by the fact those wheels are 24in in diameter.

While no engine specifications have been released, the rear bumper incorporates two wide openings for exhausts, suggesting a running model would use petrol or diesel power.

Senior vice president for global design Alfonso Albaisa said “The QX80 provides the opportunity to reimagine Infiniti's signature design DNA on a totally different scale. We sculpted our body pure, straight and horizontal, the muscularity both brute and sensual." 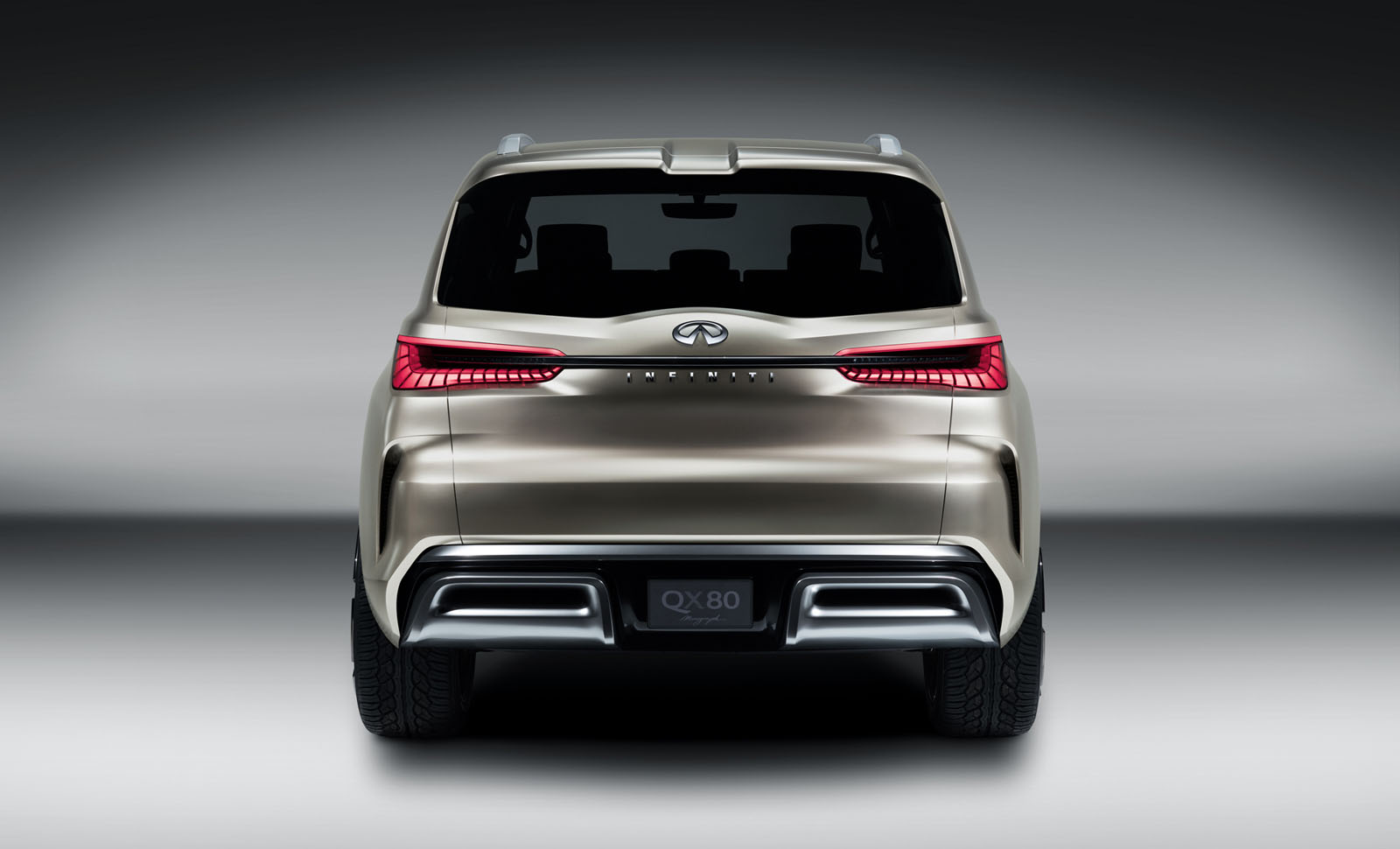 Infiniti president Roland Krueger added: “The QX80 Monograph represents a design study into our expertise or exterior design. It shows our concept of luxury and style on the road, and is an exploration of how we could enhance our future Infiniti offering in the luxury SUV segment."

Like its predecessor, the production model that the QX80 Monograph influences likely won't make it to Britain. The brand's largest model here will, therefore, remain the QX70, rivalling the Volkswagen Touareg and starts from £45,140.

Infiniti to launch performance EV with Nissan tech by 2020

I don't think JLR will be worried by this...thing. I thought '4x4s' couldn't get any worse after the BMW X1. Seems I'm wrong again!

Oh I don't know about that...USA sales neck and neck for the last few months....the RR and QX80 registering just under 2000 units per month in March. Google Y62 Nissan Patrol and you will realise that this 'thing' has mighty substance and a heritage going way back beyond the RR.

Karim Habib to the Rescue?

With news that Karim Habib, ex-BMW design boss, is now taking over at Infiniti, there's light at the end of the tunnel.

Perhaps in the same way that Habib restored BMW car design after replacing Chris Bangle, he can take Infiniti to a new level as well.

With news that Karim Habib, ex-BMW design boss, is now taking over at Infiniti, there's light at the end of the tunnel.

Perhaps in the same way that Habib restored BMW car design after replacing Chris Bangle, he can take Infiniti to a new level as well.

I love bangle BMW's and really like infiniti's especially the QX30 and QX70. Not everyone wants same ol' same ol'. Do you want Infinitis yo look like an audi or a bmw?

Strictly for aggressive people who like driving a mobile home.
Car design reduced to the level of 'mine is bigger than yours'
Pathetic.
View all comments (10)