The third-generation Mercedes-Benz CLS is priced from £57,510 for the entry-level 350d, which was recently revealed at the Los Angeles motor show.

Until BMW launches a replacement for the BMW 6 Series Gran Coupé, the only real rival to the CLS is the Audi A7, which currently starts at £48,045, ahead of its replacement by a second generation early next year.

Price wise, the CLS range so far tops out with the 400d at £60,410, but the most powerful unit at launch is the 3.0-litre petrol engine in the 450 4Matic, with a 48V electric system and EQ Boost integrated starter motor providing mild hybrid properties. It has a claimed 0-62mph time of 4.8sec and limited 155mph top speed. It delivers a nominal 362bhp and 369lb ft, with an additional 22bhp and 184lb ft available for short periods when the integrated starter motor is triggered.

The range uses petrol and diesel in-line six-cylinder engines. All are turbocharged and mated to Mercedes’ in-house nine-speed 9G-Tronic automatic gearbox and with 4Matic four-wheel-drive system as standard. The 350d and 400d share the new 2.9-litre diesel engine in two states of tune.

For the 350d, 400d and 450, Mercedes claims respective fuel economy figures of 48.7mpg, 47.9mpg and 36.2mpg, with CO2 emissions of 156g/km, 156g/km and 184g/km respectively. The CLS is only available in AMG Line trim – this means 19in alloys, a parking pack with reversing camera, ambient lighting and Mercedes' Agility Control adaptive dampers all come as standard.

A new CLS 53 is planned to join the mechanically identical E53 coupé and E53 cabriolet models in a three-strong line-up of new AMG models to be unveiled at next year’s Detroit motor show, all featuring a newly developed in-line six-cylinder engine with mild hybrid properties.

The new petrol engine will usher in electric boosting via an integrated starter motor for added performance potential and is Mercedes’ answer to the likes of the upcoming second-generation Audi S7 and recently introduced BMW M550i. 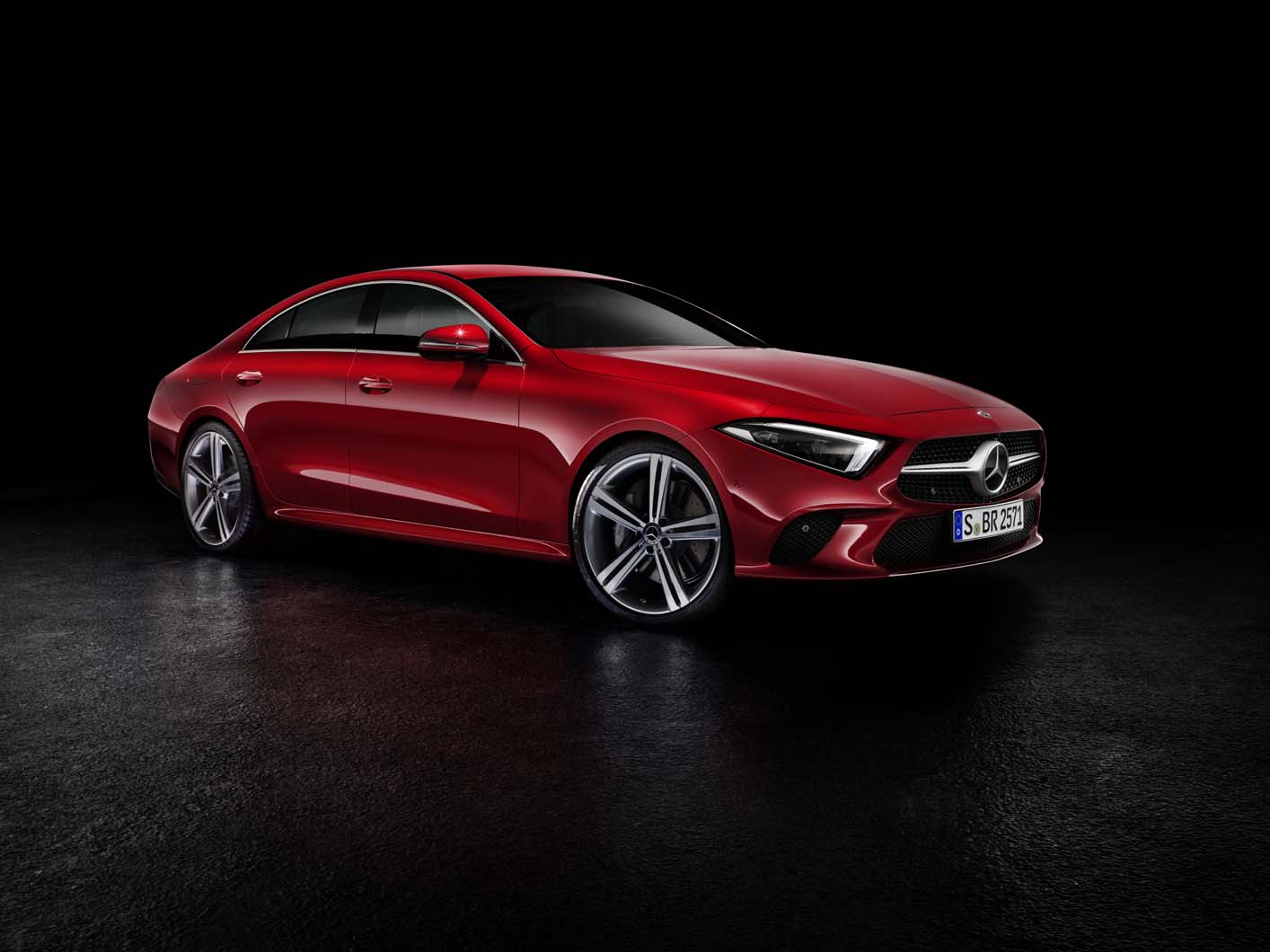 With Mercedes planning to replace the existing CLS 63 with an upcoming twin-turbocharged 4.0-litre V8 production version of the five-door AMG GT Concept, the CLS 53 is set to become the top model in the new CLS line-up.

Opinion: Why the new CLS shows that creases are dead

With more than 350,000 sales to date, the CLS has proven popular since its introduction in 2005. But with prospective customers gravitating more towards Mercedes’ ever-growing line-up of SUV models, worldwide sales have slowed significantly in recent times.

As such, the new model, which goes under the internal codename C257, will only be produced in saloon form. The CLS Shooting Brake, which has failed to live up to early sales expectations following its introduction in 2012, will not be replaced. 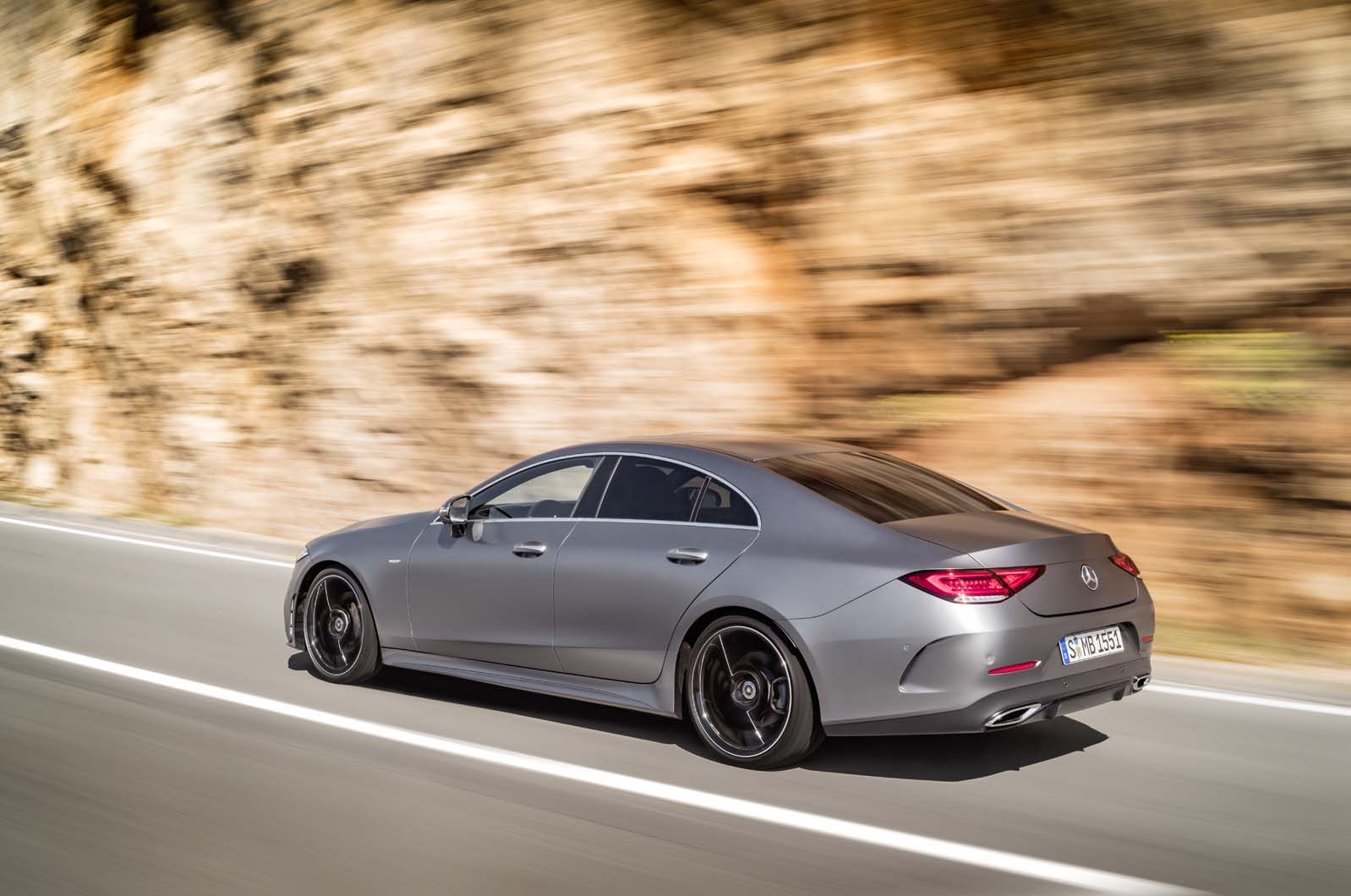 As with its predecessors, the CLS relies heavily on the Mercedes-Benz E-Class, from which it borrows its platform, drivelines, chassis, electric architecture and more. It offers three suspension set-ups.

Predictably, Mercedes promises improvements in performance, handling, comfort and safety. At the same time, it says the swoopy saloon also ushers in a new exterior design lineage to be adopted by other Mercedes models in the not-too-distant future.

The new saloon is also said to feature a wheelbase that's 61mm longer at 2935mm, allowing for larger rear door apertures and easier access to back seats. 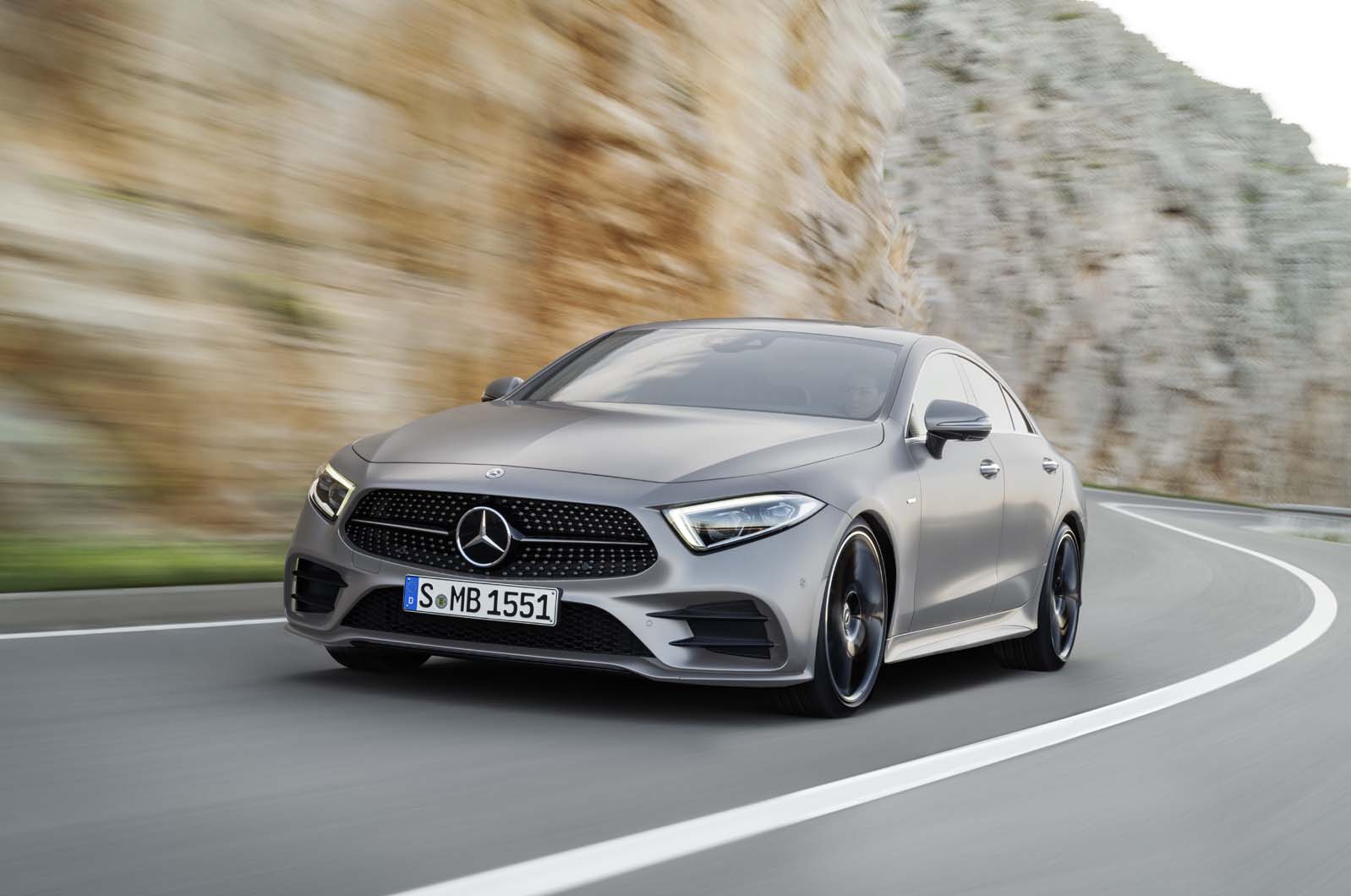 The interior of the new CLS is no longer as uniquely styled nor quite as eye-catching as that in previous incarnations of the saloon, which boasted their own bespoke facia. To provide economies of scale with other Mercedes models, it receives a lightly reworked version of the latest E-Class’s dashboard, complete with a so-called Widescreen Cockpit with twin 12.3in displays for the instruments and infotainment system, and a multi-function steering wheel from the facelifted S-Class. 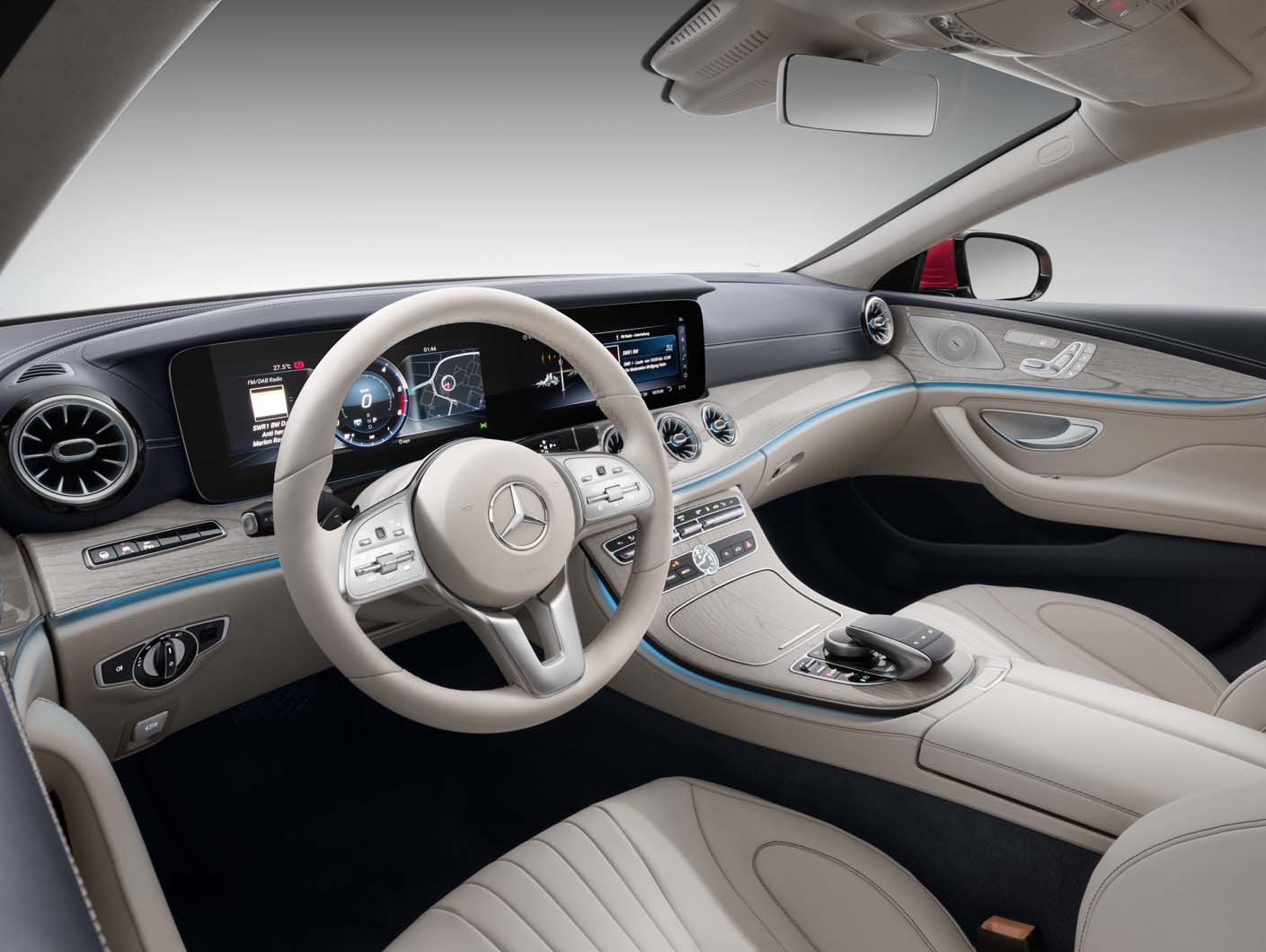 The CLS also gets a centre rear seat as standard, giving the car five-seat capability for the first time. The rear-seat backrests fold in a 40/20/40 configuration to extend the length of the boot, which boasts the same volume as the second-generation model at a nominal 520 litres.

As with the E-Class, the new CLS has five standard driving assistant functions, including lane keeping assist and speed limit assist. 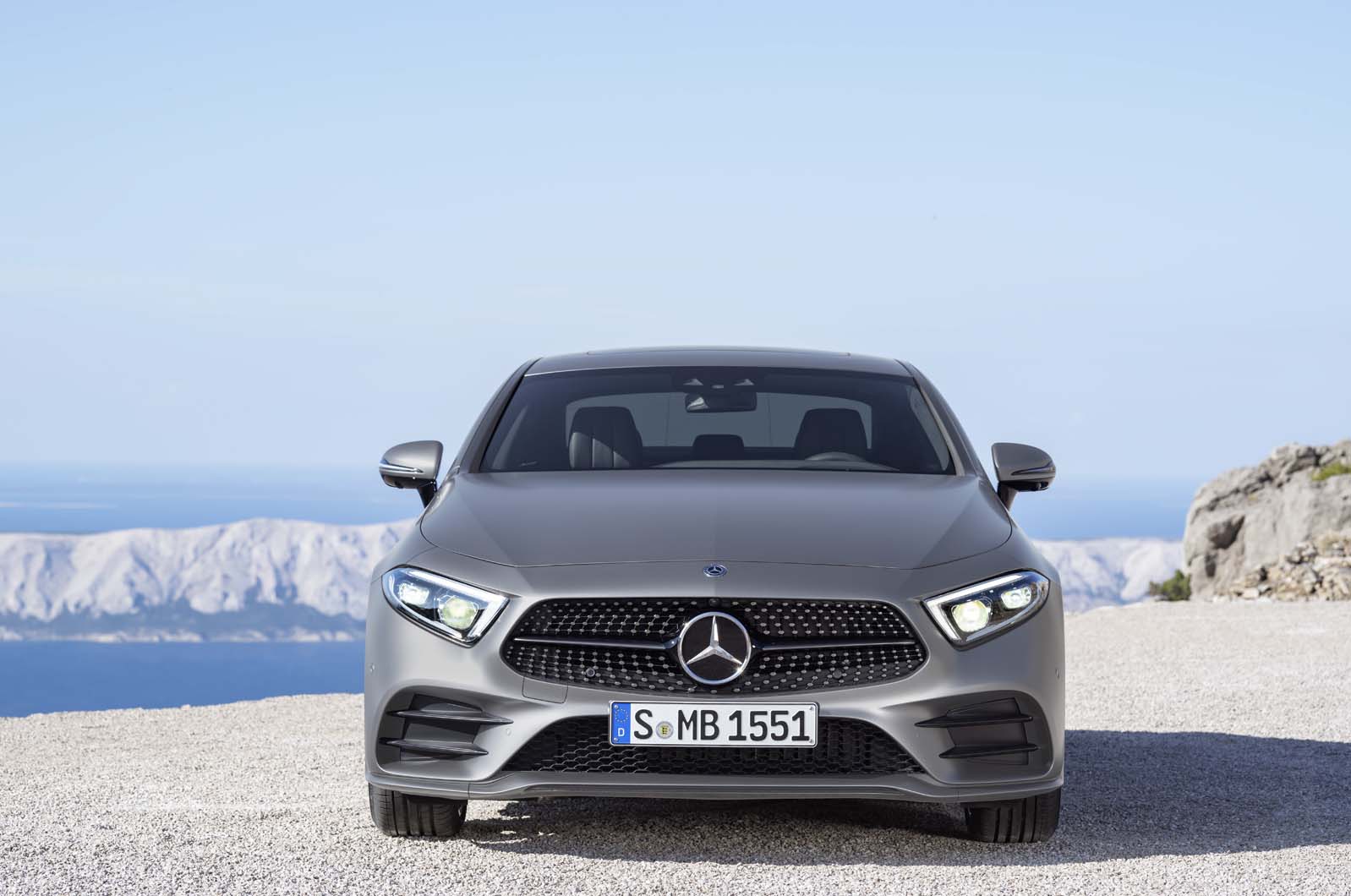 Buyers can also opt for a Driving Assistance Package that adds a further eight systems that provide semi-autonomous properties, including hands-off steering for up to 30 seconds, automatic adjustment of speed before bends or junctions and an automatic lane change function.

First deliveries of the new CLS are expected to commence for UK buyers in August. 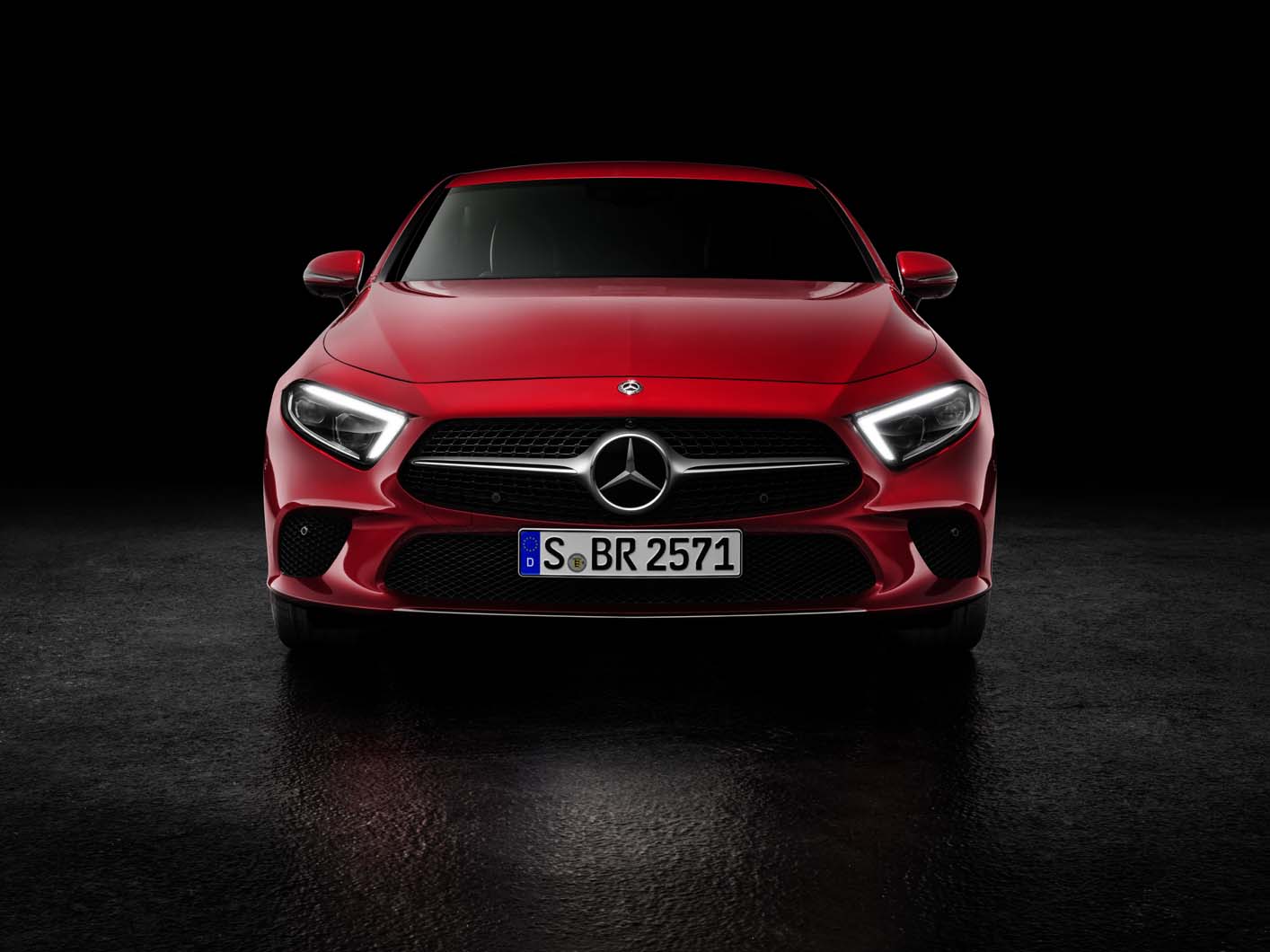 Not my cuppa tea.

The words "tedious" and "insipid" spring to mind.

Mandatory 4WD? So you need to

Mandatory 4WD? So you need to drag even more weight around? This car is less and less appealing.

Not a tree in sight

Sad really because one coukd always rely on MB in this model range to provide some nice ambience with quality veneer which I personally like in the cockpit. Now we have fancy blue lighting like a bloody circus gig. Bye bye Class hello junk