From £35,8358
Share review
The all-paw M550i is a fast, effortless mile-muncher, but there's a reason why it won't be sold in the UK
Share
Open gallery
Close

The not-quite M5, sharing its bigger brother’s combination of a twin-turbocharged V8 engine and all-wheel drive, but with less power and less performance.

The M550i is one of BMW’s M Performance products, but neither it or its diesel-powered M550d sibling will be sold in the UK, the official logic being that there isn’t enough space between the 540i xDrive and the full-fat M5.

While unable to match the raw firepower of the 600hp M5, the M550i’s 4.4-litre V8 produces an entirely respectable 456hp and – thanks to the magic of all-wheel drive and the weight saving made to this generation of 5 Series – dispatches the 0-62mph dash in a claimed 4.0sec, which is faster than the last-generation F10 M5 could manage. An eight-speed automatic transmission is standard, along with a rear-biased all-wheel drive system, although one that lacks the M5’s ability to turn itself rear-drive only. 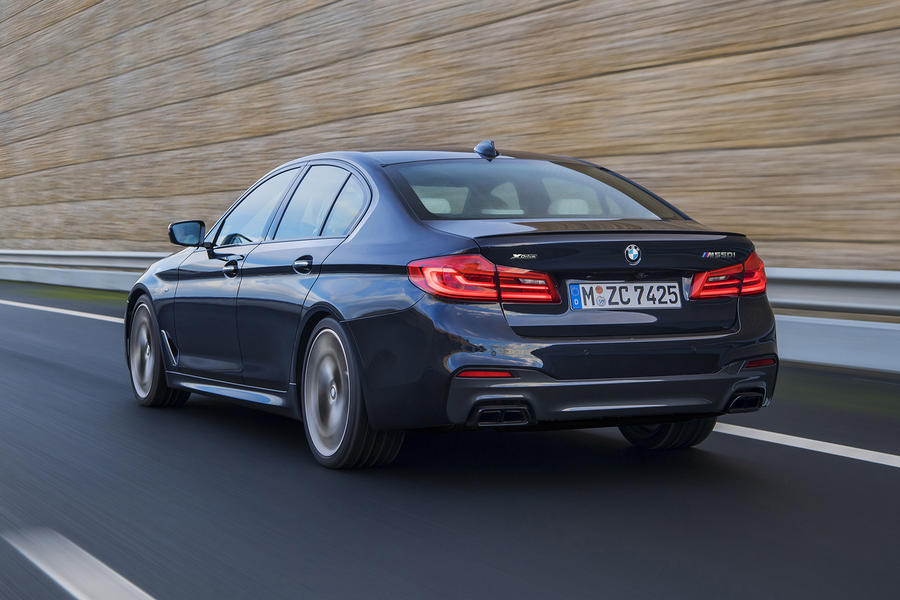 The engine is definitely the star attraction. The big V8 has an abundance of brawn – generating peak torque from just 1800rpm – and also delivers plenty of character.

It’s well-mannered under gentle use, although producing little more than a muscular hum, but it’s also happy to lift its skirts at a moment’s notice, pulling cleanly all the way to the 7000rpm redline and producing a nicely judged amount of eight-cylinder snarl when asked to do so. The gearbox helps out with intelligent part-throttle shifting to help wake the engine and impressively rapid ratio swaps at higher commitment levels. In terms of straight-line pace and soundtrack, it comfortably outguns the Mercedes-AMG E43’s turbocharged V6.

But the M550i struggles when asked to deliver on the rest of the sports saloon experience. In essence, it’s a very fast version of the standard 5 Series - a car that already feels a fair bit easier-going than its predecessors - rather than a not-quite M5.

Suspension is soft and, despite the presence of adjustable dampers, struggled to maintain body control over rougher road surfaces, even in the firmest Sport mode; there’s a surprising amount of body roll as well. Grip levels are predictably high, but the handling balance feels nose-heavy under hard use and, although accurate, the steering allows pretty much no sensation regarding the road surface through its syrupy assistance. It’s effortlessly fast and very secure, but there are none of the push-harder vibes that the presence of an ‘M’ badge might legitimately lead you to expect.

Of course, the M550i still has all the other virtues of the current 5 Series. The cabin is beautifully finished and packed with standard kit, the tech all seems to work well and is presented beautifully, with crisp animation of the large central display screen when you change modes.

Our test car also came with the semi-autonomous CoPilot active steering system, which proved adept at following US freeway lanes, although the lesser lane keeping assistant – which can apply steering torque when it thinks it needs to – seemed considerably less able to distinguish road markings and was soon switched off.

Cruising refinement is almost freakishly good, with the M550i being no louder or harsher than a standard 5 Series at the sort of rapid cruising speeds it seems to have been engineered to deliver. Economy is also entirely respectable, returning the equivalent of 27mpg even under hard use. 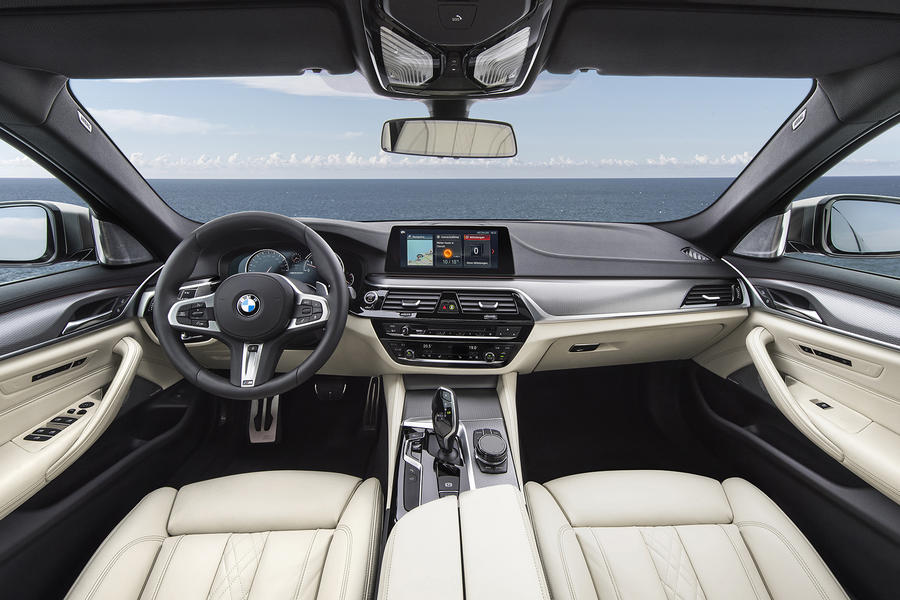 BMW GB knows its audience well and is right to be cautious about the prospects of a large petrol-engined car with limited athletic ability. The M550i feels like an old-fashioned autobahnstormer and, without the need for mega-speed cruising, there’s not an obvious place for it in the UK.

It’s certainly hard to think of anything it does notably better than the 540i xDrive and many buyers looking for a car in this space would likely stretch a little harder for the M5. So BMW is probably right to deny it to us, although the decision not to bring the diesel-powered M550d here is more perplexing.

Yet the M550i also feels like an opportunity squandered, especially in an era when manufacturers are starting to make a virtue of downsized engines and less outrageous power outputs. The M5’s increase in performance and technology might be seen as offering a chance to bring in a more driver-focused entry-level M-car to understudy it; essentially what AMG has done with its range of 43 cars. But the M550i isn’t that; in essence, it’s a very fast 5 Series for people who want an ‘M’ badge rather than an M car. 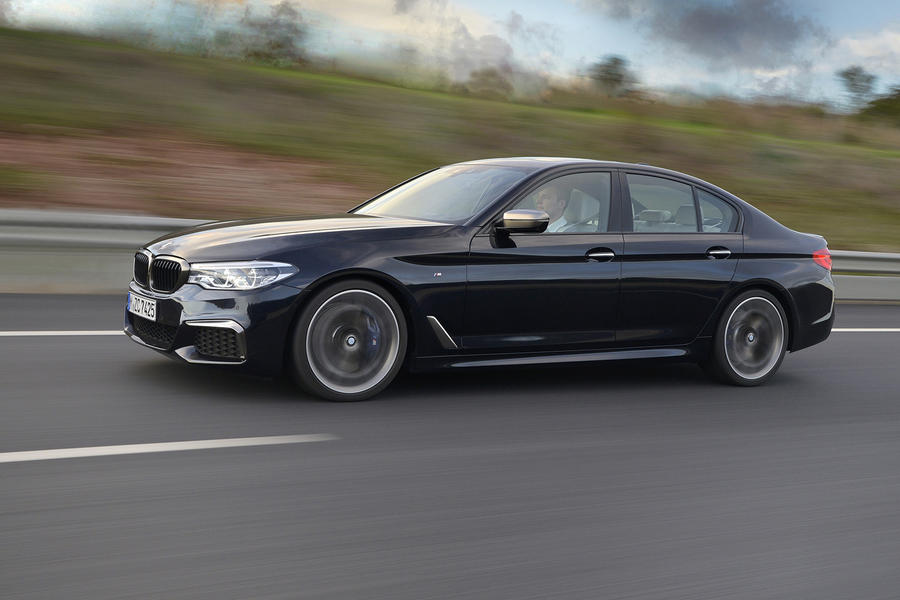 On one hand,the reiview says:

On the other it says:

"...Yet the M550i also feels like an opportunity squandered, especially in an era when manufacturers are starting to make a virtue of downsized engines and less outrageous power outputs. The M5’s increase in performance and technology might be seen as offering a chance to bring in a more driver-focused entry-level M-car to understudy it; essentially what AMG has done with its range of ‘43’ cars. But the M550i isn’t that; in essence, it’s a very fast 5 Series for people who want an ‘M’ badge rather than an M car...".

So, it can't be that sad if the UK is missing out on this "opportunity squandered", can it?

I see Autocar have changed the headline from "but sadly isn't destined for the UK."  to  "there is a reason it won't sold in the UK.".

A bit sneaky, but at least the article now makes more sense.

I suppose choice is always

I suppose choice is always good. Is there room for Alpina to offer a model based on the straight six engine? 600 bhp in an M5 is just ridiculous.

I agree. The last comp pack

Do also check that if you do buy the M5 F10 that your oil pump isn't one of the defective ones too.

The issue with this car isn't the lack of a sporty drive but the lack of a touring version (same for the 550d). In the meantime if you want a fast 5 series touring there's really only Alpina.

The UK market seems to like an outward show of sportiness. Here in Switzerland I see a reasonable number of fast cars, mostly estates which don't shout sportiness. For example Mercedes new E400 can be ordered here with the traditional Mercedes grill. We see a decent number of them in town, most often debadged.

Realistically few of these cars are going to be driven in a sporty manner. They'll be used to plough up and down a motorway. As someone who tends to go for these sort of cars there's something lovely about driving in a really unstressed manner with the power to get past a lorry or caravan if need be.

I find BMW's attitude irritating....how do they know best whether there is a place for this car in the UK.

A car with a decent petrol engine, plenty of oomph, 4wd and a decent ride (unlike the M5), sounds perfect....whats to say that potential purchaser (and this is always going to be a relatively small pool of buyers - in any country), wouldnt also regularly use the car in Europe to stretch its legs?

And if there isnt enough space between the 540i X drive and the M5...surely the same issue occurs in Europe?

Over the last 30 years there has always been this issue of 'not for the UK market with an endless stream of 'intersting' cars from Germany....the excuse used to be RHD got in the way, now it seems the excuse has changed to Minich knows best!

Cannot comment on the new M5 as obviously not driven it yet but my F10 M5 is extremely comfortable. The comp pack models are pretty firm but if you don’t spec that it’s a lovely cruiser. Some reviews even said it was more comfortable than the standard F10 5 series as it doesn’t run on run-flats.

Not for UK eyes.

The UK is not a continent so no point in ruining the UK/GB "version" of BMW. Allied (no pun intended) to the highest petrol prices in the world.