The third-generation Bentley Flying Spur will represent a “quantum leap in technology, performance and innovation” over its predecessor, according to the Crewe-based maker.

Bentley hopes to establish itself as the leader in the ultra-luxury saloon market ahead of the new Rolls-Royce Ghost’s arrival next year and says it has created a car that “maintains Bentley DNA” to appeal to loyal customers while offering contemporary design to entice a new generation of buyers.

The goal for the model – which follows the Bentley Bentayga and Continental GT in the sales rankings and makes its public debut at the 2019 Goodwood Festival of Speed - is to offer sports saloon agility paired with limousine refinement so that it caters to both drivers and those being chauffeured. The latter is a crucial selling point for the Flying Spur in China, which is the largest market for the model alongside the US. 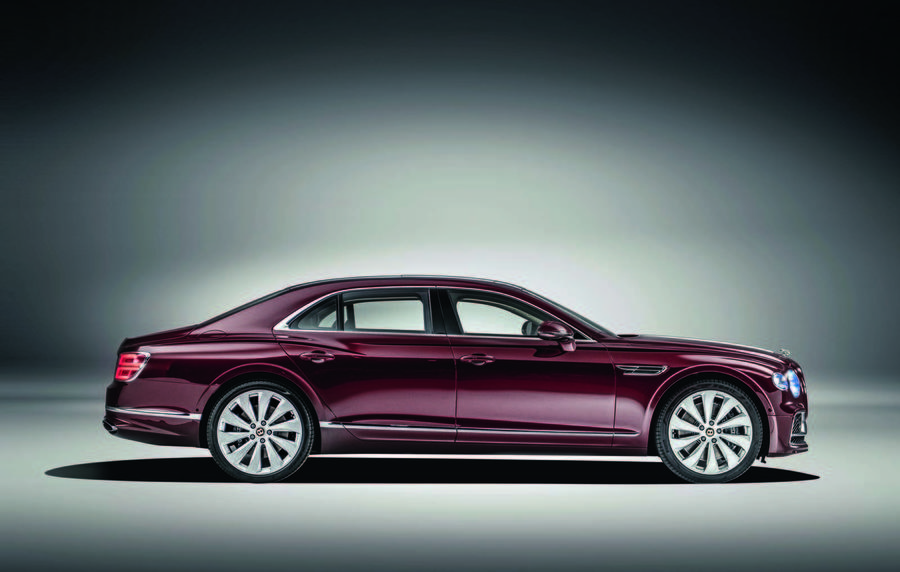 Bentley claims that the new Flying Spur “owes only its name to its predecessor” – alluding to its new chassis, suspension, W12 engine and eight-speed dual-clutch automatic gearbox. Much of the new Flying Spur’s set-up and componentry is shared with the Continental GT, launched last year.

However, despite the Flying Spur and Continental’s identical underpinnings, including the MSB platform that is also shared with Porsche’s Porsche Panamera, Bentley has sought to differentiate the two cars not only through the difference in body shape but also a number of finer design details both inside and out.

The Flying Spur will launch with Bentley’s familiar range-topping twin-turbocharged W12 engine, reworked for this generation. The 6.0-litre unit produces 626bhp and 664lb ft of torque, accelerating the car from 0-60mph in 3.7sec, 0.7sec faster than its predecessor. The top speed is 207mph. It is mated to an eight-speed dual-clutch transmission promised to deliver “smooth and refined acceleration, quicker gearshifts and improved fuel economy”. 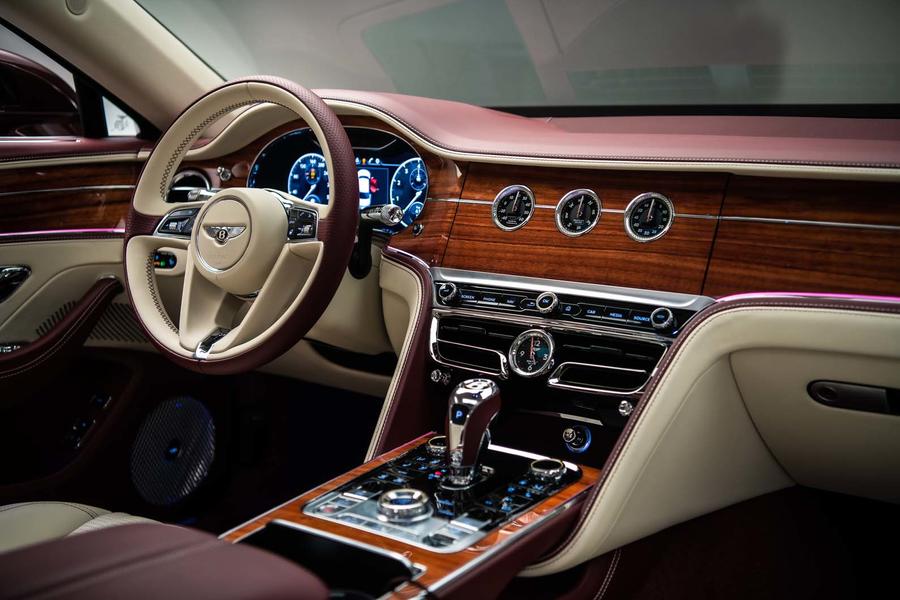 The engine combines high-pressure and low-pressure fuel injection, intended to maximise refinement, lower particulate emissions and optimise power and torque delivery. The new model reaches a peak torque of 664lb ft at 1350rpm, compared with the previous generation’s 590lb ft at 2000rpm. The unit also uses a variable displacement system that can shut down half the cylinders, making it more efficient below 3000rpm.

After the W12 launches, an entry-level V8 will be added to the range. A V6 petrol-powered plug-in hybrid will complete the powertrain line-up. This, Bentley’s second hybrid, will follow the Bentayga Hybrid, which launches in August.

The Flying Spur pioneers all-wheel steering for Bentley, a system that is promised to enhance stability at high speeds and manoeuvrability around town. The rear wheels are steered in the opposite direction to the front wheels at low speeds, reducing the turning circle and making parking easier. At higher speeds, the rear wheels stay in the same direction as the front wheels, as a means of improving stability.

While the second-generation Flying Spur had all-wheel drive, the new model introduces an active system that favours rear-wheel drive to improve the car’s handling but will also send torque to the front axle automatically as needed. Bentley said the front end of the car feels “much lighter” as a result.

Other features already seen on the Continental include Bentley’s Dynamic Ride System, a 48V electric active roll control system and three-chamber air springs containing 60% more air volume than the previous single-chamber springs, resulting in a chassis set-up for all types of driving.

Torque distribution varies according to the drive setting. In Comfort and Bentley modes, up to 354lb ft is sent to the front axle. In Sport mode, torque to the front axle is limited to 206lb ft to achieve a more dynamic feel. The model also has a torque-vectoring-by-brake system.

The Flying Spur gets a longer wheelbase than its predecessor – the front wheels move forward by 130mm, creating a shorter overhang and more interior space – but its overall proportions are similar to the outgoing car’s.

While the outgoing model and the new Continental have a matrix grille, the new Flying Spur adds vanes to the grille “to make the car look more majestic”, said design director Stefan Sielaff, and to pay homage to WO Bentley’s 8 Litre model from 1930. The matrix remains behind the vanes for cooling purposes. 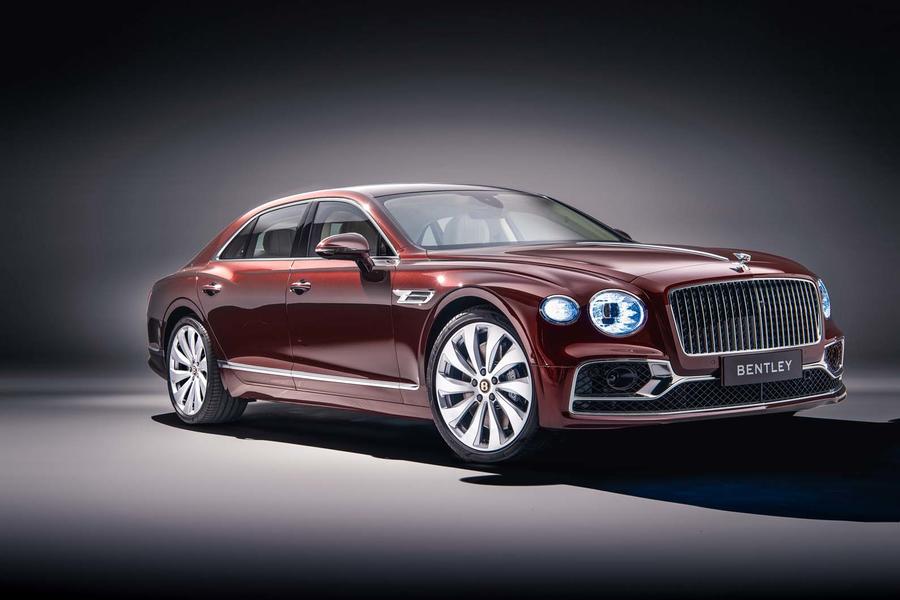 The Flying B mascot has been redesigned for Bentley’s centenary year. It is the marque’s first-ever electronically powered, retracting Flying B – the existing emblem on the Mulsanne is manually adjusted – and even gets illuminated wings.

The headlights and ‘B’ graphic tail-lights have the same crystal-cut-effect LEDs as found on the Continental. Standard wheels are 21in, but 22in Mulliner rims – the biggest yet offered on a Flying Spur – are available.

Inside, the Flying Spur has the familiar double-wing theme in the front, and uses the well-received rotating display including the 12.3in touchscreen first launched on the Continental. The second side of the display has three customisable digital dials and the third side continues the wood veneer around the cabin.

There is a different central console to the Continental featuring two air vents with optional diamond-cut edges sitting between a clock, wireless charging capability, USB ports and more compartments.

Sielaff said there is a “focus on both front and rear” as the Continental GT and Panamera share new model’s MSB platform car needs to appeal to both drivers and passengers. There is an option for darker front seats and lighter rear seats, and Sielaff added the rear has a “lounge-like feel”. 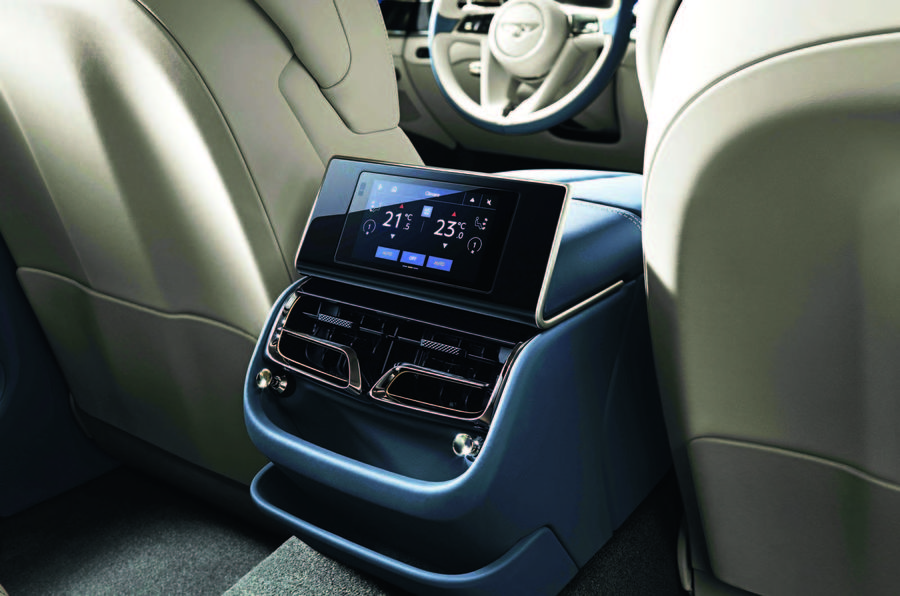 The Flying Spur introduces all-new quilting in the door card, which features three-dimensional, textured leather upholstery that was inspired by the EXP 10 Speed 6 concept and is claimed to be a world-first. The seats have optional “cathedral window quilting”, a progression of the diamond quilting in the Continental that is intended to differentiate the two Bentleys.

Bentley model strategy to focus on grand tourers and SUVs​

they have changed the lights!! they should be big on the outside and slightly smaller in near the grill the old one look better form the front i think.

even still i do like it, looks very posh and sleek.

While no doubt this is a vast

While no doubt this is a vast improvement over the old model, it looks somewhat disappointing compared with the Continental. Mainly because of excessive detailing and fussy panel bending. Call it bling. Call it cheap. But the Ghost looks much more dignified. The Ghost's overall proportions are so convincing that no further adornment, no further intervention, is necessary.

The grille is pretty bad, but...