BACK TO ALL NEWS
Currently reading: New Bentley Bentayga hybrid kick-starts brand's electrification plans
UP NEXT
Analysis: Why the decline in diesel sales has slowed in 2022

Bentley has revealed its first-ever plug-in hybrid, the Bentley Bentayga hybrid. It is the brand’s first step towards electrification, which will culminate in the launch of a pure electric mid-sized sports car by 2020.

On show in Geneva, the model, which is capable of up to 31 miles of electric-only range, uses an electric motor with a turbocharged 3.0-litre V6 petrol engine, the same set-up used in the Porsche Panamera E-Hybrid. The motor acts as both an electric motor and a generator. Performance figures have not yet been revealed but a total output of 450bhp is expected.

It is the car maker’s most efficient model yet, emitting CO2 emissions of 75g/km on an NEDC cycle.

Price is not confirmed either, but the hybrid will sit below the Bentayga W12, currently the most expensive model at £162,700. Order books open later this year.

The standard Bentayga’s automatic start-stop switch is replaced with a control for three E Modes – EV Drive, Hybrid Mode and Hold Mode – all of which help manage battery usage.

There is also a revised infotainment screen and driver’s infotainment panel with information on performance, consumption and energy source. 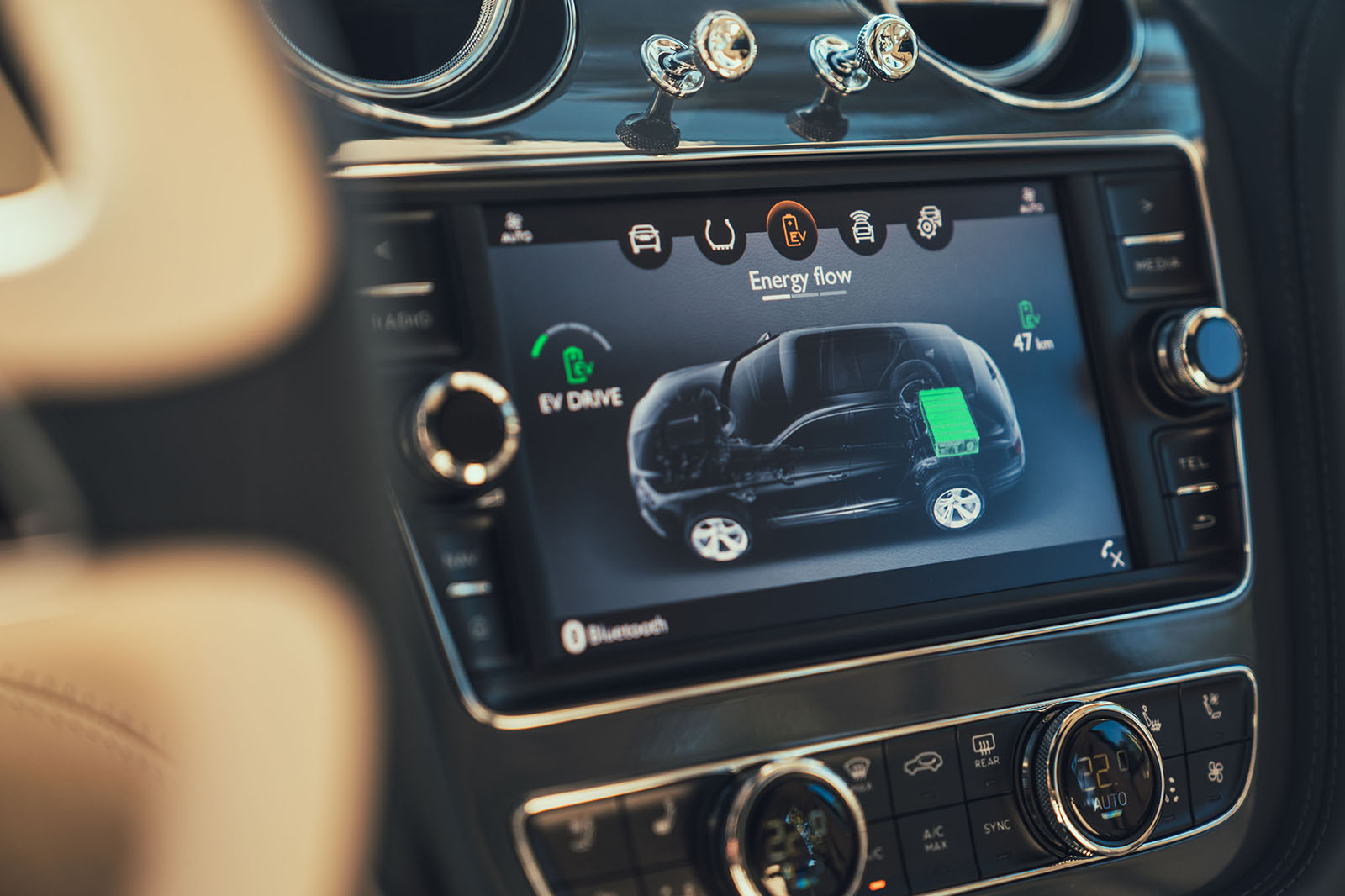 The navigation calculates the best usage of the electric motor and engine for each journey while a new mobile phone app enables remote battery charging, heating and cooling.

On a standard household socket, full charge of the battery takes seven-and-a-half hours. However, those with a specific charging connection installed at home can reduce charge time to two-and-a-half hours.

Bentley has collaborated with designer Philippe Starck to create a recharging unit for Bentayga hybrid customers, which is intended to keep cables “neat and safe” while acting as a “functional piece of art”. 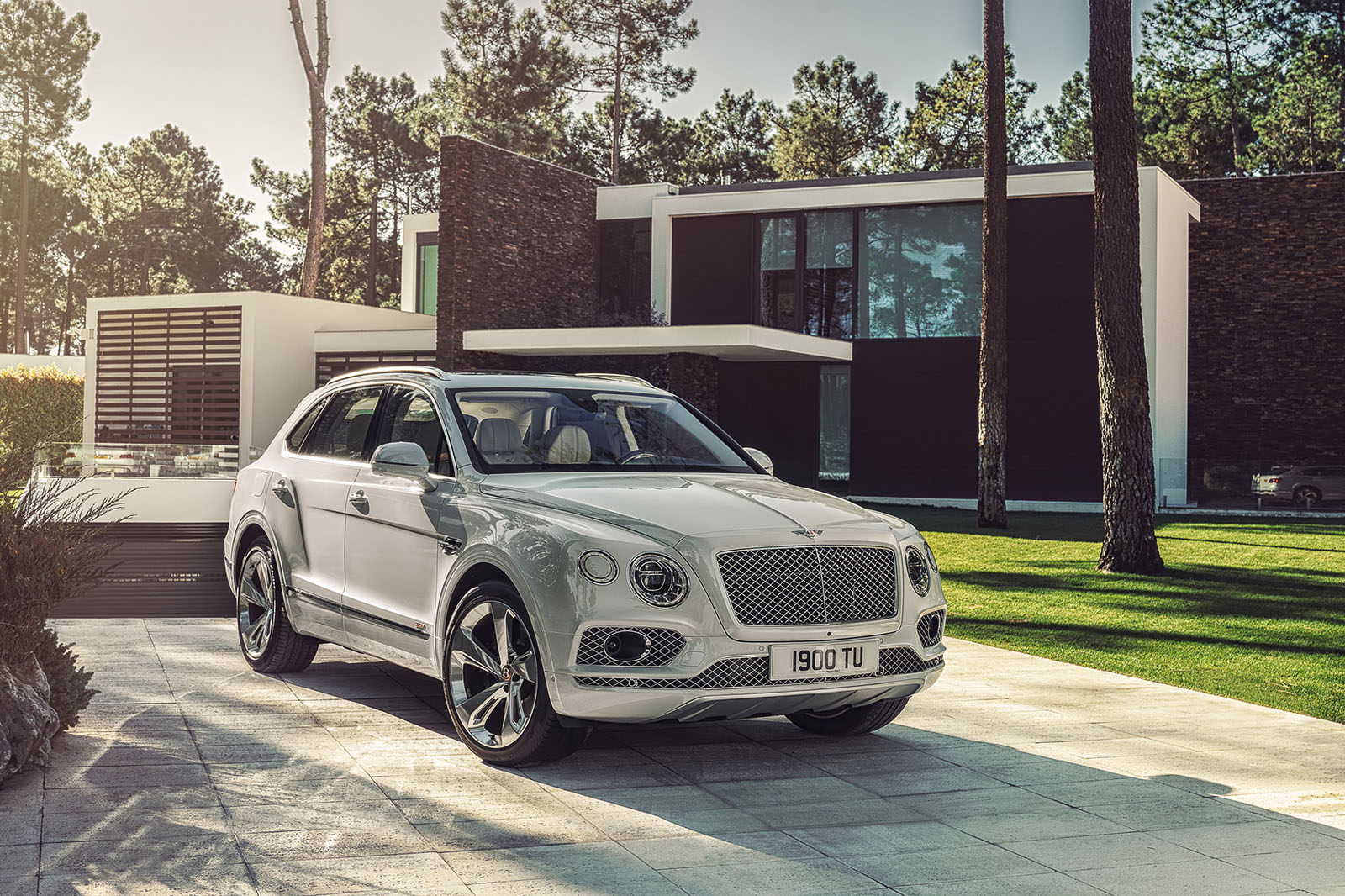 The only visual differences to a combustion-engined Bentayga are copper-coloured ‘Hybrid’ badging on the lower front doors and tailgate and a copper finish to the wheel centres and Bentley badges. Inside, the tread plates will also read ‘Hybrid’.

Bentley confirmed last year that it will eventually offer plug-in hybrid variants of all its models.

Its pure electric model – a mid-sized sports car – is expected to share a platform with the Porsche Mission E, meaning it will be bigger than Bentley’s electric EXP12 Speed 6e concept shown at last year’s Geneva show.

The Crewe-based car maker has previously said that it intends to be the leader in electrification in the luxury segment.

Sometimes, cars grow on you

But not in this case. Capable or not, it doesn't get any prettier does it.

This is the return of six cylinder power to Bentley Motors. The first six cylinder motor powering a Bentley since the Bentley S1 in 1959. Although those S1s, quite large cars, a foot longer than these new Bentaygas, were 500kg lighter, so they did without electric and turbocharging assistance to their propulsion.
289 6 March 2018

There is research out there pointing to wealthy owners buying 'plug-in-hybrids' to salve their conscience (and take advantage of access in city centres),  but not actually bothering to 'plug them in'. Thereby running the car in normal ICE mode. Particularly in places like Hollywood (La La land).

The hypocracy is stunning, and I would guess quite possible to be replicated in this country too.....particularly London/Cheshire.

This is how crazy the whole thing is becoming!