BACK TO ALL NEWS
Currently reading: Bentley model strategy to focus on grand tourers and SUVs
UP NEXT
Ford backs call for European ban on new ICE cars from 2035

Bentley model strategy to focus on grand tourers and SUVs

Engineering boss rules out sports cars, but grand tourers, electric cars and even aircraft technology are all in play for Crewe maker
Open gallery
Close

Bentley will finalise its new model strategy by this summer, with a renewed focus on its credentials as a maker of grand touring vehicles and SUVs, and no ‘pure sports cars’.

Werner Tietz, Bentley’s board member in charge of engineering, has revealed that the company has decided not to pursue any of the themes explored by the EXP 10 Speed 6 sports car or electric EXP 12 Speed 6e roadster concepts shown by its former management.

Instead, the Crewe firm, now led by Briton Adrian Hallmark, will look to expand its GT lineup. “The concept positioning was not something that fits with our future strategy now,” said Tietz. “Pure sports cars are not a topic for us now.

“Since joining, our first move has been to work on the current range, and to set a better cadence for launching products at spaced intervals. Now we are looking at what future possibilities there are.”

Tietz declined to elaborate on specifics, but said any new products would need to broaden the firm’s spectrum of buyers, rather than sell additional cars to them.

“The first thing we want to be sure of is that we have a GT car in every segment, and it is not certain if we are there now,” he added.

“There is more potential in that segment, I think. Bentley can offer something unique, particularly around delivering cars with a sport edge that can, at the push of a button, transform into a luxury, refined car. 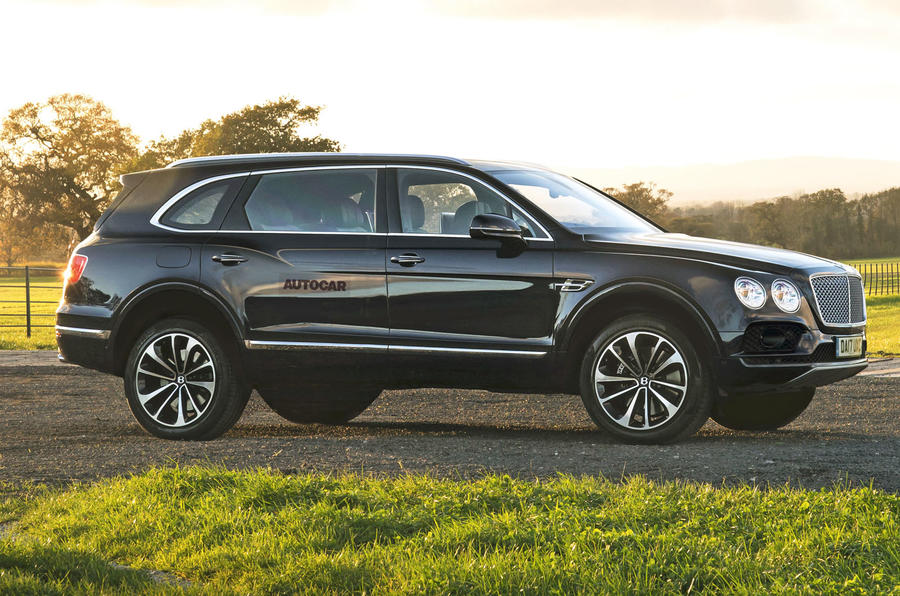 “There is some potential when you look at SUVs too, especially around a car larger than the Bentayga if you consider its value to the Chinese and American markets. So, yes, that is one opportunity we are exploring. Bigger cars are an interesting avenue for Bentley – for now, we are not thinking about doing anything smaller, as that’s not what we’re about.”

Reports had suggested that Tietz was considering a smaller, battery-electric crossover as an urban-focused model, but he said: “We are investigating several concepts for electrification, but for now the promise is that we will offer a plug-in version of every car we have on sale today by 2025. Our research suggests that is what customers want now.

“An electric, city-focused car is one idea we are thinking about, it’s true. But it is just a concept in our minds. But would an electric car have to be a new car line, or a successor to something we already have? What kind of range does an urban car need to have? There are so many directions we need to consider rather than just saying ‘we will make an electric car’.”

Tietz added: “It is by no means certain that battery-electric is the right way to go. One point we see is that some cars in our line-up – the Bentayga, for instance – is used for towing horseboxes and boats. With the current EV technology, that wouldn’t work.

“So we are looking for a step in technology that doubles battery capability. We have looked at solid-state batteries for nearly five years now – they should be able to achieve these goals, but they are not yet ready. If solid state achieves its goals, then it becomes interesting – but only then.

“That’s why we are also evaluating fuel cell technology constantly, even if it is probably 10 years away from reaching a point that it can be practical, and also seeing what possibilities there are with the development of synthetic fuel.”

Tietz highlighted the potential for synthetic fuels to be made using clean energy, such as wind power, as being especially appealing.

“The evidence is that these fuels could be CO2 neutral, and that raises interesting possibilities,” he said. “We see the airline industry looking into this quite seriously – the electric plane doesn’t look like becoming a large-scale reality soon – and that could help us open up possibilities. We have open minds.”

Tietz said Bentley would give clues to its future direction at events coinciding with its 100th anniversary celebrations in July.

Opinion: Bentley is more modern than ever on its 100th birthday

New Bentley Continental GT V8 is most agile yet​

So goodbye then to Bentley's sporting heritage and the best looking concept they have produced since Java ?

When Adrian Hallmark was appointed as CEO (and token Brit) he made some subtly disparaging marks about the vile Bentayga (the natural choice for the aesthetically retarded) and SUV's in general, which gave me hope that Bentley might actually return to producing something in it's proud tradition of sporting elegance, but now we know who is really in charge here.

He's certainly one of those...

...So Bentley's giving Autocar readers a sneak-peak at the new range of Bentley trucks.  Even bigger than a Bentayga, why yes, of course...  In the VAG group, there's MAN trucks and there's Scania truck and buses.  So, plenty of scope here to retrim them with wood, leather and cheap German carpet, or maybe even a hash-up re-skin job and bu99er the brand completely.   So futue treats could include the Bentley Neoplan Skyliner, the Bentley TGX 18.430 4x2 LLS-U with Bentley XLION equipment package, or the 13.7m long, 59-seater Bentley Touring HD, with its 13-litre, 490hp diesel engine...

Perhaps someone in VAG has researched their constituent history: to quote Ettore Bugatti "Le camion plus vite du monde".  Unfortunately, this won't be achieved by blinging a bus.  Or reskinning a Q8.

This feels like a conversation that was had 5 years ago. And it went in the wrong direction. Its increasingly looking like large city centers, where these cars are used and not towing horseboxes btw, are going to ban anything non electric soon. You can say that the carbon from your fuel will be captured (if you ignore entropy) but you are still releasing pollutants in the city centre. They should follow the market with SUVs but electric (maybe they can borrow some technology from Bolinger if they cant do it themselves) and they still need some aspirational sports cars (Porsche Cayman based?) for the brand image and halo effect.
View all comments (4)