Bentley says its replacement for the Flying Spur will exceed expectations. We rode shotgun in Lapland for an early taste
Open gallery
Close

The morning briefing, delivered from the confines of our warm hotel, is brief. It’s a decent day for lake and land-based testing, with a fresh dusting of snow giving relatively good traction. Please remember to keep the fabric covers draped over the interior, with the bonnet and doors left firmly closed, to frustrate the spy photographers. Lights on for the snow spray, which will be considerable, given a Bentayga Speed is leading our convoy. Oh, and keep an eye out for the black bin bags.

The what? Because Autocar is piggybacking this winter-testing excursion only as a passenger, I keep shtum. Nigel Tew, Bentley’s long-serving director of whole vehicle engineering, will later explain that locals tie bin bags to roadside poles where reindeer have been seen crossing. Despite the copious snow and ice in northern Sweden, people don’t hang about on the larger roads. It follows that, with the mass of the animal conveniently concentrated at windscreen height, any car – and, realistically, its occupants – will feel it if metal and mammal collide.

This metal is precious, too. It’s the new four-door version of the Bentley Continental, the crucial New successor to the Flying Spur, and one of 12 prototypes currently ‘in territory’ for fine-tuning before the wraps officially come off later this year. Three weeks ago, it was hot-weather testing in South Africa, but it has since returned to Crewe for a quick software update and preparation for Sweden, the industry venue of choice when engineering teams need to cover everything from traction control tuning to fluid viscosity at -30deg C. I’m told New Zealand is another option if more winter testing is required out of the European season, but only for those manufacturers with the deepest pockets, because the cost of air-freighting the cars 11,500 miles across the world is by all accounts unholy. 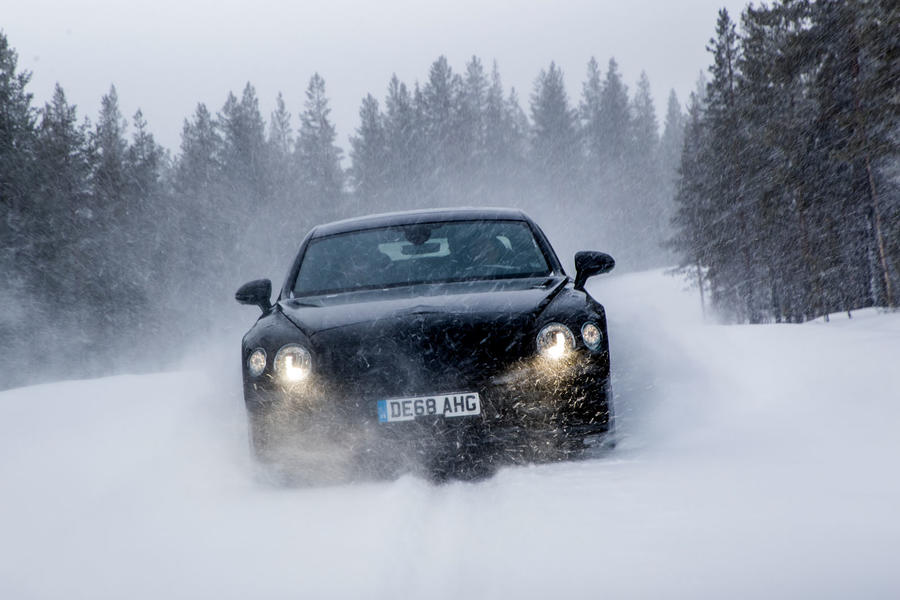 Bentley’s engineering teams – separated for chassis, electronics, powertrain and so on – typically spend a week at a time in Arvidsjaur, the small town that has grown around car industry since Opel first tested here in 1967 and, thanks to Bosch and Mercedes, is the birthplace of electronic stability control. “For the chassis, we’re looking about how the wheel arches fill with snow, how the steering and dampers work at low temperatures,” says Florian Sprenger, formerly of Porsche but now Bentley’s head of chassis engineering and a bit of hand in these ‘low-mu’ conditions.

But as a global model that should prove popular not least in Russia, there are also more prosaic issues that demand cold-weather testing: does the parking brake freeze on overnight? Do the touchscreens struggle to wake up? Does the screenwash freeze as it hits the windshield? Equally, if snow packs the grille, snuffles a sensor and leads to catastrophic engine overheating, it’s unlikely to go down well with customers who have paid for the last word in luxury and sophistication.

“From a functional point of view, we also look at the stability control and the traction management,” Sprenger continues as we pass a convoy of similarly disguised BMWs travelling in the opposite direction. It all sounds predictable enough, but the reality can be treacherous. Four-wheel drive, winter tyres and a good 12 inches injected into 15 countries in 24 hours with a the already generous wheelbase of the Continental GT coupé make for massive innate stability in the ‘Flying Spur’ (official name tbc), but lose control and such a vastly heavy car will go through the roadside snow banks like a wrecking ball through a stained-glass window. It does occasionally happen – how, you have to wonder, could it not? – which is why there’s rope in the boot of the Bentayga.

There are broader concerns in the minds of the engineers, however. The new car will battle the Mercedes-Maybach S600 and an overhauled Rolls-Royce Ghost, each in their own ways pretty spectacular. And as a Bentley, we would expect it to drive more sweetly than either.

Bentley will also look to push this new model into a higher price bracket than before, around the £200,000 mark, according to CEO Adrian Hallmark, and as such it will need to justify that expense with a commensurately lavish interior and splendid rolling refinement. The revised design should help: even on our cladded-up mule, it’s obvious the new car will cut a sharper, more athletic and more powerful stance than the old Flying Spur. The bevelled snout sits prouder, the grille more upright and yet the roofline is lower. An opportunistic glimpse at an undisguised 3D graphic of the car – shown on its own infotainment display – also reveals the sleek line of the raked rear windscreen and bootlid, which bears a striking resemblance to that of the handsome 2008 Brooklands Coupé. 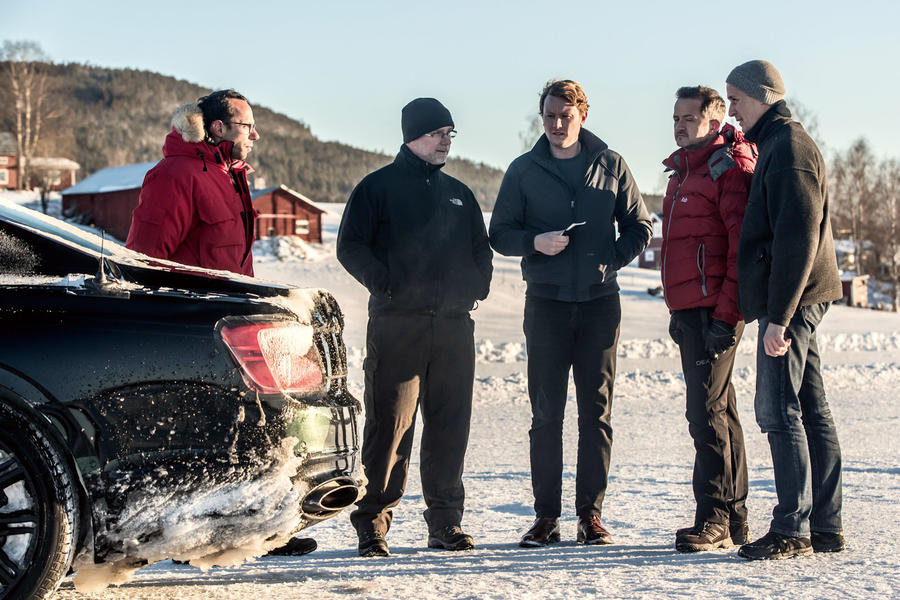 Performance? A known quantity. Bentley will offer its twin-turbocharged 6.0-litre W12 and 4.0-litre V8 engines, with a 2.9-litre V6 plug-in hybrid powertrain expected to satisfy more punitively taxed markets, namely China. I’m told the W12 will be transplanted directly from the Continental GT, with 626bhp and a heroic 664lb ft delivered from a whisker over 1300rpm. Out here, Sprenger can usefully deploy barely a third of those totals on the road, but their latency is palpable and reassuring and ultimately adds to a pervasive sense of wellbeing. The official top speed is likely to be quoted at around 200mph, although one engineer quietly mentions some prototypes are already lapping Nardò in excess of 225mph.

Delays to the Continental GT have had a knock-on effect for the Spur programme, and tuning Porsche’s dual-clutch automatic gearbox for imperceptibly smooth shifts has also taken longer than expected, but, in this final season of winter testing, they seem to have that cracked. Elsewhere, the Stuttgart connection runs deep. As the ‘platform owner’ of this MSB chassis, Porsche had the ultimate say on the parameters, although Bentley was involved from the start of development and as such there’s greater built-in provision for wheel-travel – crucial for comfort.

In any case, the benefits of using a Porsche platform are evident once we’re out on the polished ice of the Arctic Falls proving ground at Lillkorsträsk. A farm during the summer months, in winter the lake is painstakingly prepared for the manufacturers – three days’ TLC for just a morning’s testing – and a test track is carved through the surrounding fields. Naturally, massive drifts ensue, but it’s the way the steering follows the slip angle of the car, with the chassis then deftly pulling itself straight under power, that highlights the neutrality of the chassis. Before you ask, I can actually see this happening, because Sprenger repeatedly throws the car sideways then removes his hands from the wheel entirely, to no ill effect. He won’t be drawn on specific rivals but softly remarks that there are cars out in the field that don’t do that – once you get unstable, they exaggerate the movements. 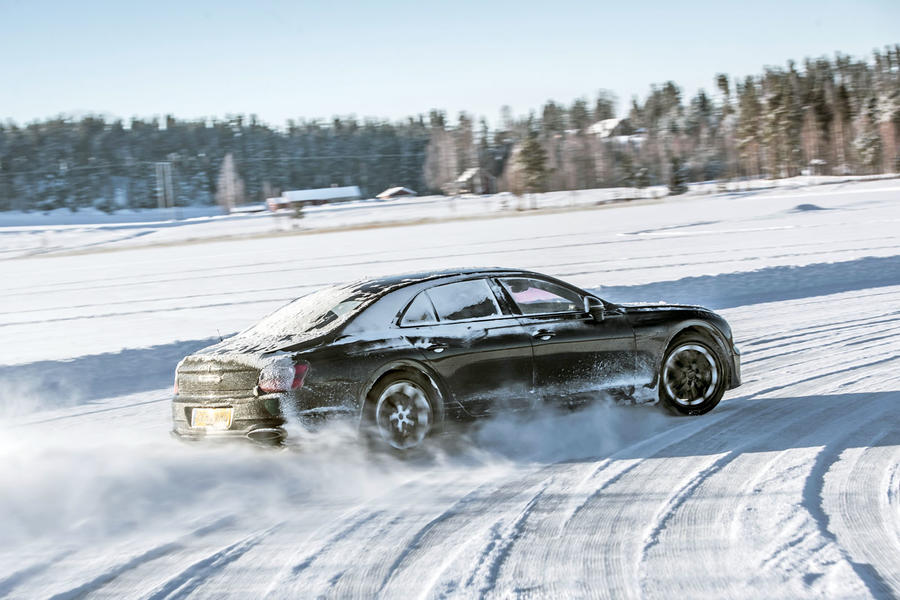 The ride back to Arvidsjaur from our farm-cum-test track is arguably even more reassuring – and useful, at least for prospective owners. It’s twilight, and our prototype has settled into a fast cruise on the ice-pocked roads. Foam in the tyres is said to reduce road roar by as much as five decibels, which is the difference our road-testing microphones typically highlight when we road test a car at 40mph and then at 70mph. While quiet, these roads prevent noise levels seeping away to downright eerie, but with the new car’s raised beltline and low roof, from the rear bench it still feels gloriously cosseting but not remotely cramped. Bentley is also still the master of seat design, and I can almost feel my heart rate slowing. That’s a big tick in the box.

Ultimately, in this kind of environment, it’s nigh impossible to get an accurate impression of a car’s true character, let alone from the passenger seat. And yet the next ‘Flying Spur’ hasn’t in any way tripped up. Stability and comfort, body control and not least rolling refinement in difficult terrain all seem a genuine step on. My road-tester’s backside also intimates this car will possess a little bit of handling swagger, certainly in the context of a luxurious limousine.

We’ll know for sure when we drive an undisguised car on proper roads soon enough, but you might just be looking at the surprise star of the Bentley line-up.

The pics give a good

The pics give a good indication of a much sleeker saloon shape and, like the Continental, manages to get rid of the awkward bulk of the previous models. The RR Ghost still possesses that confident formal dignity that this aesthetically much improved Spur is unlikely to match.
Mikey C 29 May 2019

Bentley will still want to

Bentley will still want to maintain a gap between this and the Mulsanne, I imagine the next Mulsanne will be more "formal" looking to differentiate it

Julianne is a good question....

Bentley will still want to maintain a gap between this and the Mulsanne, I imagine the next Mulsanne will be more "formal" looking to differentiate it

...for, as we know the New Flying Spur is thanks to Porsche MSB bones,. Yet, as I recall, the new/replacement for the Mulsanne will not use the platform of its forbearer. Will it too use Porsche DNA? If so, can the MSB flexible enough to stretch that much to fill those shoes? Or will they, like Rolls Royce, built an all new architecture for the Mulsanne replacement to ride on?

...the heading should say: "Mulsanne is a good question..."

Tough For Autocar to Survive

Whilst I fully understand the need for Bentley to winter test, its sad that Autocar is reduced to having to go on 'ride-alongs' and headline with a picture of a Bentley Continental Flying Spur going sideways on opposite lock across a frozen lake in rural Sweden! Does anyone on this forum know personally of any current (or past) Bentley owner that has enjoyed such an adventure in their Bentley?

Based on how excellent the Conti Gt is, this car will surely be fantastic.