9
New Conti Convertible has all the many advantages of a new platform, seen already in the Coupe. It’s in a class of its own.
Open gallery
Close

Bentley has just revealed a convertible version of its second generation Continental GT, identical in every important way to the coupe except that it now has an elegant powered hood that takes 19 seconds to erect, can be lowered or raised while the car is being driven at speeds up to 31mph (50km/h) and whose total assembly — plus the requirement for extra chassis stiffness — adds just over 100kg to the coupe’s already substantial 2295kg kerb weight. And which brings its own new level of versatility to two-door luxury coupe ownership.

Because this car was engineered from the beginning with a bespoke platform shared only with Porsche’s Panamera, and the need for a ragtop was taken into account at the earliest design stage, the hood intrudes less into the cabin, requires less chassis reinforcement and disturbs the car’s aerodynamics less (drag factor rises only fractionally to 0.32) than in the outgoing car.

The result is a rarity in the UK, a luxurious convertible with decent seating for four, though even here the largest occupants probably fit better in the front. 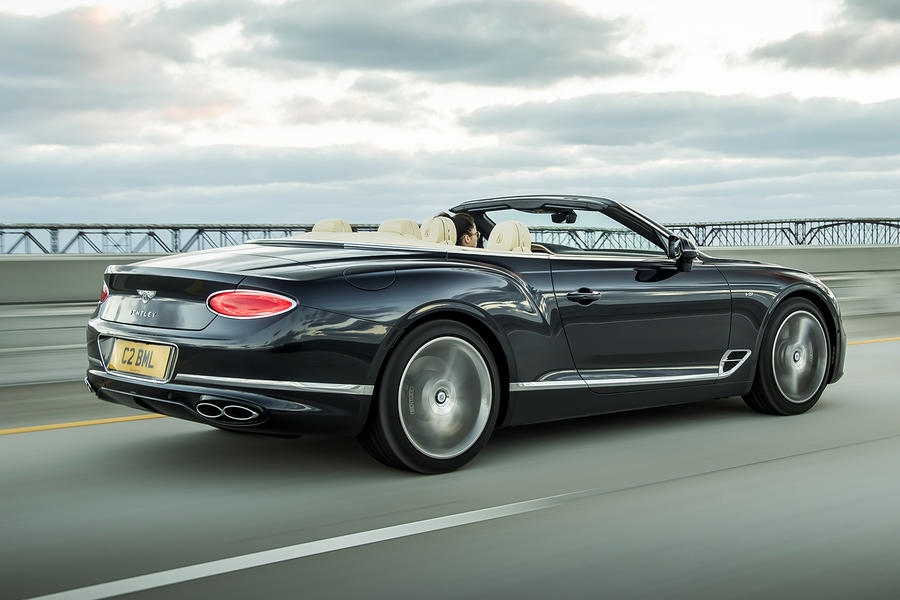 It’s a big car, for sure, fractionally longer than the outgoing car at 4.85metre overall length and with 100mm added to the wheelbase. Mainly, this moves the front wheels forward, an action that greatly improves body proportions and removes the last sign of a relationship with the old VW Phaeton limo, the car that provided the original Conti’s platform.

The engine is the recently revised 6.0-litre W12, now with both direct and indirect fuel injection (to spread torque and cut CO2) as well as variable valve timing and many more mechanical refinements. The engine produces 626bhp at 6000rpm, plus a mighty 664lb ft of torque, an output that easily beats even the most powerful versions of the previous GT.

Like its predecessor this car has four-wheel drive, but the emphasis of the system has completely changed. You now get a set-up that retains rear-wheel drive most of the time, delivering an adjustability of handling the old car never offered. If necessary it can divert up to 38% of its torque to the front wheels in the Bentley or Comfort suspension settings, or 17% in Sport, all according to demand from the sophisticated chassis electronics. As the above suggests, the Conti now uses the same three-chamber air suspension units as its coupe sibling, and the Panamera. And instead of the old Slushmatic, you now get an eight-speed twin-clutch gearbox.

All that power and torque easily overcomes the Convertible’s weight to make 3.7sec 0-60mph sprints possible (it concedes an undetectable 0.1sec to the fixed-head model) and the 0-100mph time is a Ferrari-rivalling 8.0 seconds. In truth, there’s little else different between coupe and convertible. The siblings have virtually the same chassis balance, the same steering response and the same ride quality because Bentey’s engineers have done such a brilliant job of eliminating the chassis flex and scuttle shake so often present in big convertibles.

They also have virtually the same performance — everything except the all-important open-air facility for which you pay around £18,000 extra. Sounds a lot, doesn’t it? But nothing comes cheaply in this arena, and neither does the customer seem to expect it. Our First Edition Convertible test car (£36,000 extra over the £175,100 base price) also had a further £17,000 of classy gadgetry, including a “Naim for Bentley” premium hi-fi that costs a cool £6500 extra.

Once you’re driving with the top down, you rapidly realise how much less important total performance is to a luxury convertible. The balmy cockpit airflow, the prestigious progress, the way the exhaust note murmurs up to your ears over the boot, the greater sense of pleasurable driving (and reduction in effort to concentrate when driving long distances) all come into play in a convertible — or at least, in the average convertible.

Where the Bentley convertible scores is that, when its hood is erect, it’s difficult to distinguish from its coupe cousin. Daily driver versatility is a quality Bentley has always claimed for its cars, and this new Conti convertible definitely delivers. Top down touring is profoundly enjoyable and there’s little or no compromise, either when it rains or when it comes to carrying rear passengers. 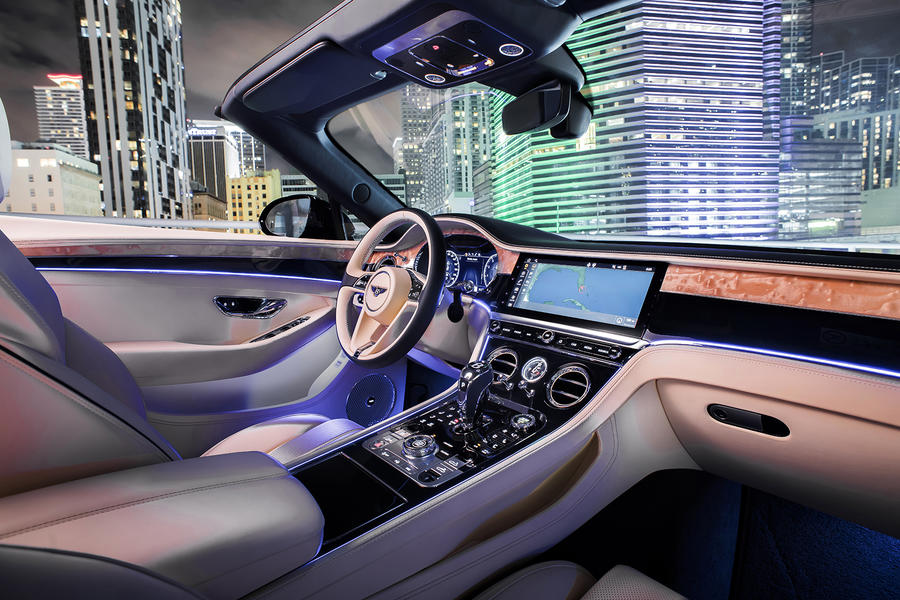 If you’re shopping for drop-top four-seaters in the Bentley bracket, it’s hard to find anything that compares. Other big convertibles are available, some a good deal cheaper, the Rolls Dawn a lot more expensive.

All but the latter lack the Bentley’s combination of name, timeless quality, space, capability. And in the Bentley you pay less and get much more performance. So it strikes us that potential Conti ragtop owners aren’t going to be faced with a need to sift exhaustively through lots of rivals.

The decision will be a simple matter of deciding whether they want the world’s only luxurious £175,000 to £220,000 convertible or not. 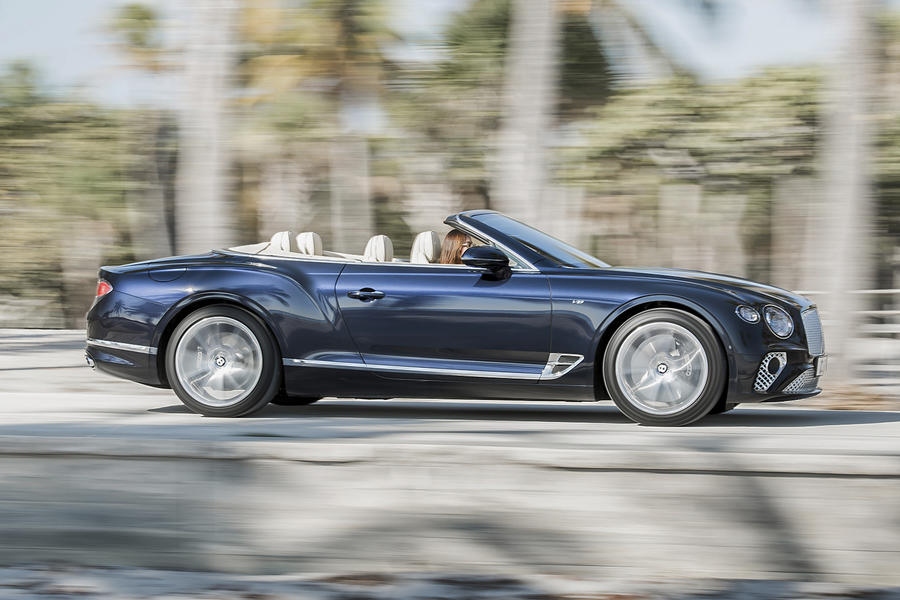 Anything these days with

Anything these days with german money thrown at it will no doubt be dynamically and technically good. I've never been a big fan of Continental GT. Personally, it just never felt like a true Bentley. If I have this much money to splash out then i'd rather save up some more and get a proper looking Bentley.

I had the unfortunate chance of seeing this car in person and the front is by far the ugliest I've ever seen. There's no sense of direction in how it's designed and the use of chrome grills is overly done and chrome around the headlights just gives it an after market look. The rear is great and interior is very good apart from all those buttons in the centre console.

.... but five hours to change a nearside headlamp bulb, including taking the wing off and removing the bumper.  Just hope it doesn't take the Bentley dealer another five hours to put it back together again.

When I become a Premier

When I become a Premier League footballer, this will be on my driveway :-)