BACK TO ALL NEWS
Currently reading: New Skoda Octavia vRS drops disguise ahead of unveil next week
UP NEXT
New Ora Funky Cat touches down at £30,495 with 193-mile range

Skoda's 2020 Octavia vRS is due to be revealed at next week's Geneva motor show, but prototypes are already running around with barely any camouflage.

We can see that this isn't the standard Octavia, unveiled late last year, thanks to its array of typical vRS design cues. There's an enlarged lower air intake with honeycomb trim, chunkier sills, bigger wheels hiding enlarged brakes and red calipers, and new twin exhaust tailpipesat the rear. We can also see that this prototype displays a charging port on its wing, marking it out as a plug-in hybrid.

The new PHEV version promises to offer the most potent version yet of the drivetrain already seen in the Volkswagen Golf GTE. As before, there will also be 2.0-litre petrol and diesel vRS models, the former promising even more power than its 242bhp predecessor.

However, sources suggest that the plug-in hybrid version will match the petrol in terms of outright power. That means the now-familiar combination of a turbocharged 1.4-litre petrol engine and an electric motor, mated to a DSG dual-clutch automatic transmission, should be good for around 250bhp and as much as 300lb ft. However, the heavier plug-in is expected to be slightly slower off the line than its petrol-only sibling, with a 0-62mph sprint time of around seven seconds. 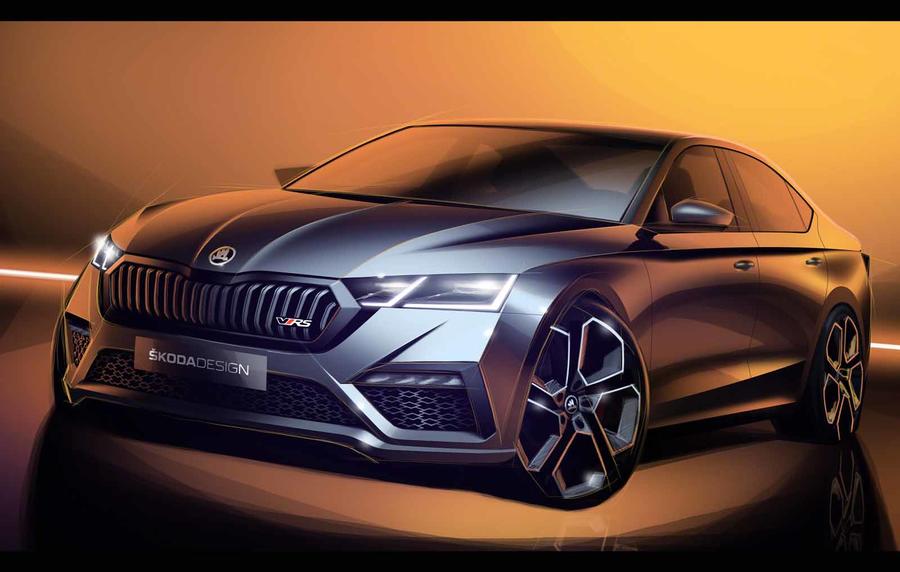 The acceleration deficit is largely down to extra mass. The addition of the electric motor and a rear-mounted battery pack (suggested to have a capacity of up to 13kWh) add in excess of 200kg to the kerb weight, but that will be offset in part by instant, electric-propelled torque and the ability to run for up to 30 miles in electric-only mode.

The regular petrol model is set to be the quickest of the Octavia vRS line-up. Details aren’t confirmed, but sources suggest that the Volkswagen Group’s familiar EA888 motor will be tuned to deliver close to 250bhp, while torque could rise above 280lb ft. Performance is expected to improve over that of the existing car, with the 0-62mph sprint taking approximately 6.5sec.

As before, there’s tipped to be a choice of dual-clutch automatic and manual transmissions. However, it’s yet to be confirmed whether either the PHEV or the petrol will get the Volkswagen Group’s VAQ electromechanical limited-slip differential. This hardware did appear on the outgoing vRS 245, so it’s likely to feature once again on the pure-petrol versions.

It’s expected that the diesel-powered vRS TDI will use essentially the same 2.0-litre engine as before, with 181bhp and 280lb ft. However, changes to the engine’s internals and its management system will ensure that the unit meets the latest stringent emissions regulations.

Elsewhere, the vRS is expected to be as versatile as ever. Alongside the three different powerplants are the choice of hatchback and estate bodystyles and front- and four-wheel-drive configurations.

Externally, it’s expected that the Octavia vRS will receive the usual muscular styling makeover and the option of more extrovert colour choices. The interior, meanwhile, will benefit from heavily bolstered sports seats and bespoke trim and graphics.

On-sale dates and prices are as yet unknown, but first deliveries are expected at the end of this year. The plug-in hybrid model could prove to be the priciest Octavia yet, potentially costing up to £34,000.

Are Skoda trying to copy Kia?

How ironic that 15 or even 10 years ago it was Kia trying to be like Skoda and now Skoda seem to be copying Kia traits like that big grill for instance and having the badge on the bonnet,  I preferred the way Skoda done it in the early 00s and still think the 2nd gen recent Octavia is the best looking one and had te best dash and interior too.

The big grill on the Octavia does not do it any favours at all but at least it does not have the ugly split lights of the outgoing model.

Skoda obviously like BMWs obsession with larger grilles, this one's gone over the line towards too big now.

Skoda is rapidly losing its

Skoda is rapidly losing its visual identity, as is Seat. To my eyes, this Octavia manages to be uglier than the last one, with maybe some unnecessary added flab.