BMW has previewed its plans for a luxurious new SUV to be positioned above the existing third-generation BMW X5 with the unveiling of the Concept X7 iPerformance.

On show at the Frankfurt motor show, where it is lined up alongside BMW’s Concept Z4 roadster, the new six-seat SUV presages a planned production version of the X7 due to reach showrooms during the second half of 2018. It will offer the choice of traditional petrol and diesel and, as showcased by the new BMW concept, a plug-in petrol-electric hybrid driveline with a zero-emission range of up to 62 miles.

The styling of the Concept X7 iPerformance possesses clear links with BMW’s earlier Vision Future Luxury Concept shown at the 2014 Beijing motor show. It has an upright stance and taut surfacing treatment providing it with a clean and contemporary appearance that the German car maker says reflects its take on the modern luxury aesthetic.

“The Concept X7 iPerformance introduces the BMW styling DNA to the luxury SUV segment. The design employs just a few precise lines and sublte surface work,” explained Adrian van Hooydonk, BMW Group boss. “It has a luxurious and sophisticated feel, thanks to its understated use of forms and precise detailing."

Features such as the kidney grille, front air vents, air breather units behind the front wheel houses, brushed aluminium window surround and 23in wheels have been intentionally exaggerated on the concept. However, Autocar has been told they will be toned down for incorporation on the upcoming production version of the X7 in much the same way the detailing of the Vision Future Luxury Concept was refined before appearing on the current 7-series. 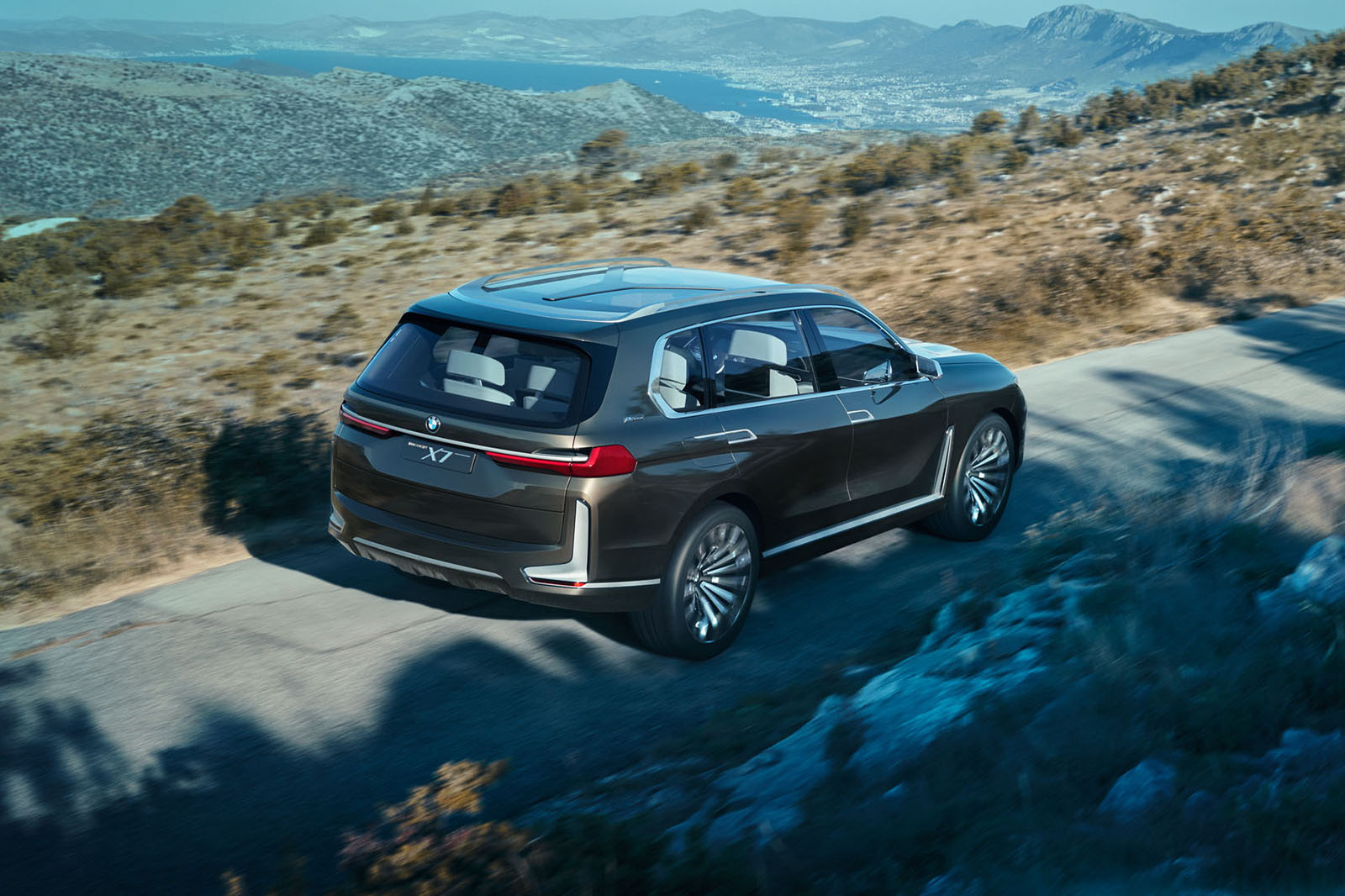 The dimensions of the concept are said to closely mirror those of the upcoming production version of the new SUV, which is planned to be produced at BMW’s Spartanburg manufacturing facility in South Carolina, USA.

By comparison, the Mercedes-Benz GLS stretches 5131mm in length, 1981mm in width and 1849mm in height, while riding on a 3076mm wheelbase. Other perceived rivals include the Range Rover, which runs to the 4999mm in length, 2220mm in width, 1835mm in height and uses a 2922mm wheelbase in standard form. 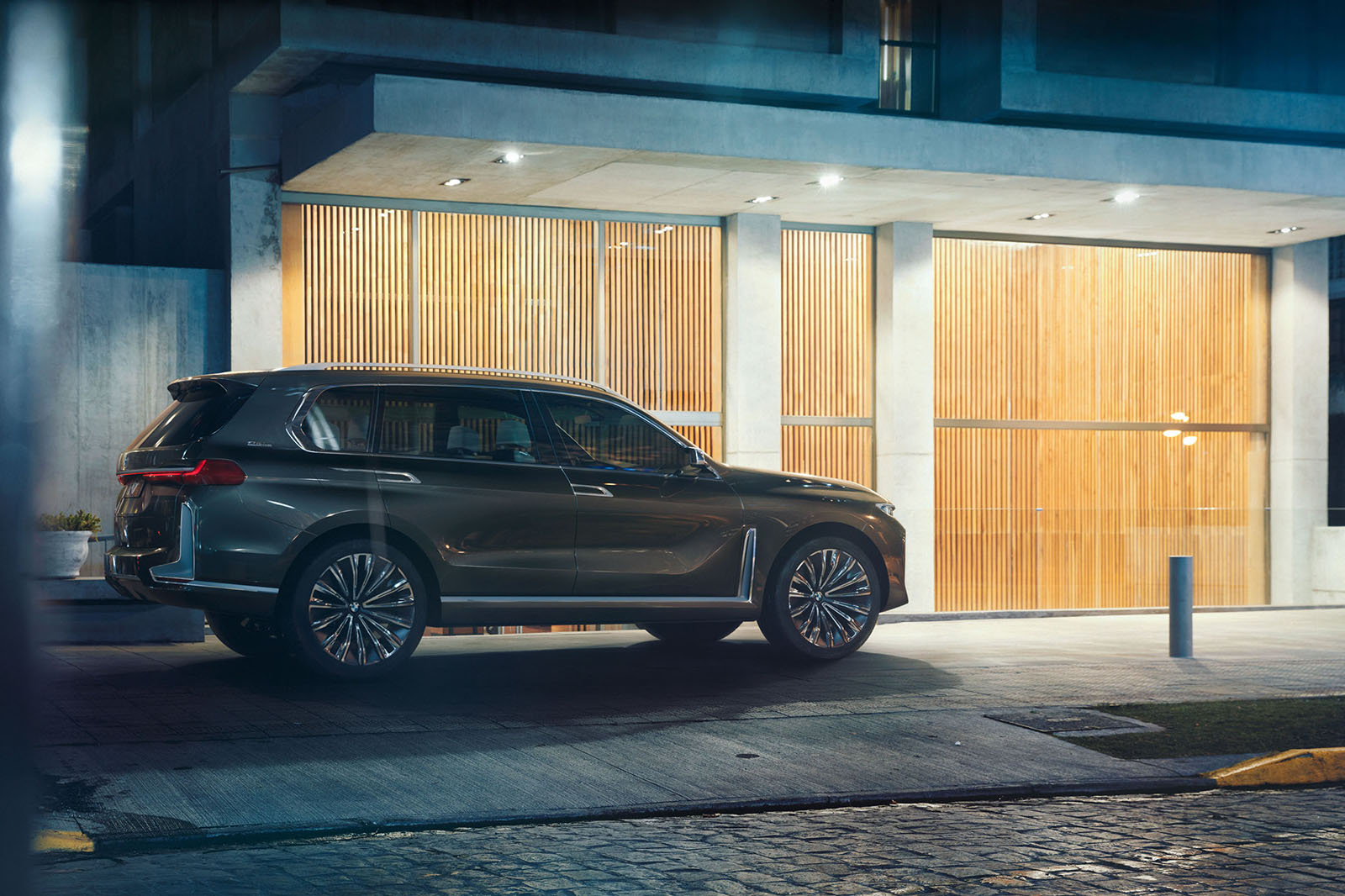 Inside, the Concept X7 iPerformance provides accommodation for up to six occupants in three rows of seats. Like the Mercedes-Benz GLS, however, the production version has been conceived to offer seating for up to seven. The dashboard and its controls mark new ground for BMW’s X models, as does its digital instrument display.

BMW isn’t giving too much away about the plug-in petrol-electric driveline used by the Concept X7 iPerformance, although it confirms it has been engineered to deliver a pure electric range more than twice that of existing hybrids offered by the German car maker at 62 miles.

Autocar can reveal it relies on the same set-up as that used by the 740e xDrive iPerformance, with a turbocharged 2.0-litre four-cylinder petrol engine operating in combination with an electric motor in the forward section of the gearbox housing, albeit with a larger capacity battery providing a greater range. 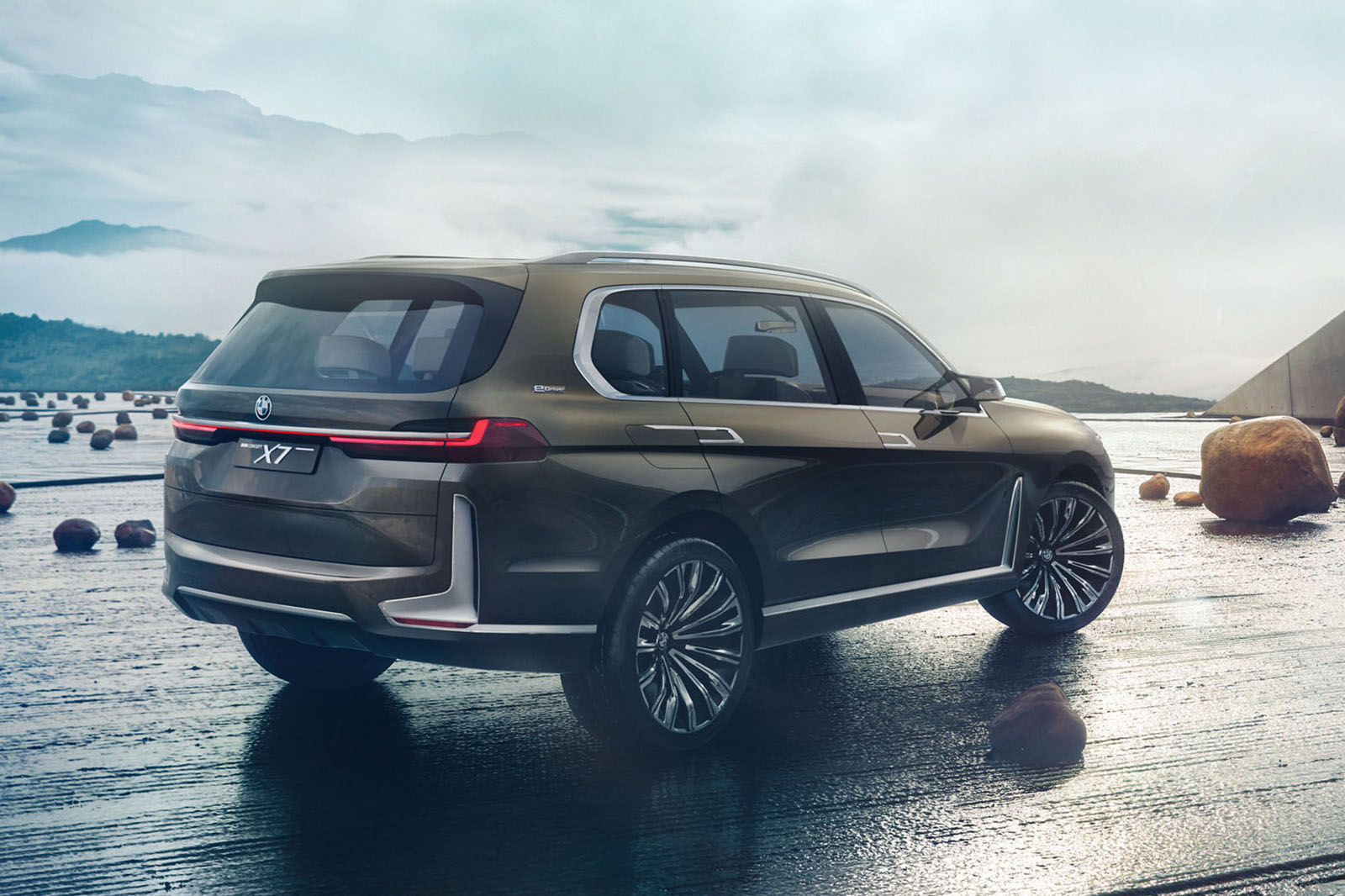 In the 740e xDrive iPerformance, the plug-in hybrid system delivers 255bhp and 295lb ft of torque.

The upcoming X7 forms part of a push to further establish BMW’s presence in the luxury car segment under the company’s Number One > Next strategy.

The German car maker says the production version of the concept unveiled in Frankfurt forms part of a exclusive club of BMW models that also includes the existing sixth-generation 7-series and upcoming second-generation 8-series coupé together with the i8 coupé and soon-to-be-launched i8 roadster. 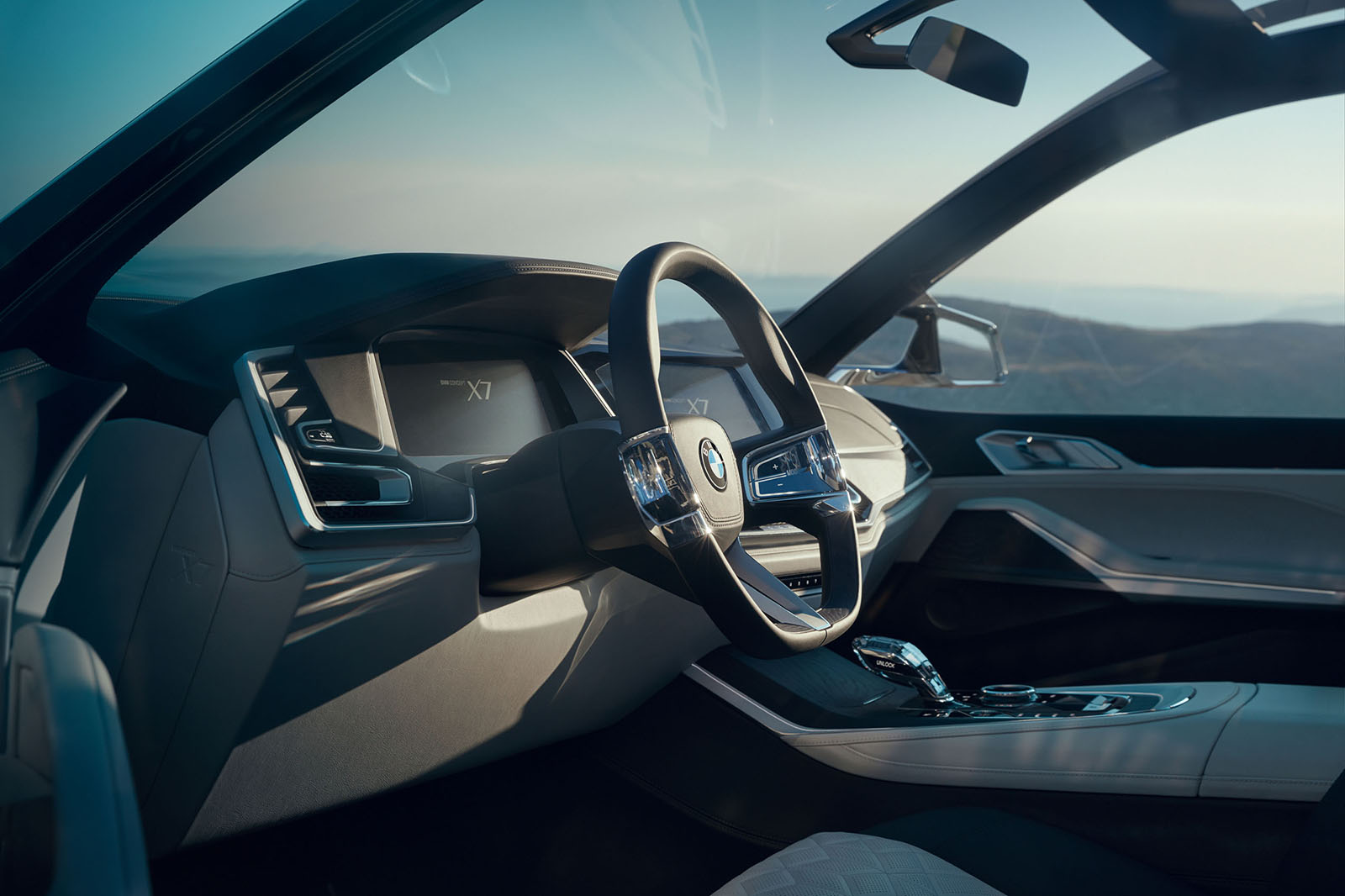 “The X7 embodies elements of our corporate strategy to grow our presence in the luxury class,” said Ian Robertson, BMW sales and marketing boss. “The X family’s new top model extends BMW offering the luxury class and redefines the concept of luxury for the brand.”

To underline its up-market aspirations, BMW’s designers have provided the concept of the new SUV with a revised badge. Harking back to the treatment seen on early BMW models, it combines a black-and-white version of the company’s traditional roundel with its name, Bayerische Motoren Werke, written in full.

BMW’s entry-level SUV, now in its second generation, is the only current X model to use a transverse engine. It is also built in long-wheelbase guise for the Chinese market, where the model is offered with a plug-in petrolelectric hybrid powertrain denied to UK customers.

Due to reach UK showrooms in 2018, the X2 was previewed as a concept at last year’s Paris motor show. Known under the codename F49, it shares its platform and powertrains with the X1, alongside which it will be produced in BMW’s factory in Leipzig, Germany.

The third-generation X3, known internally as the G01, made its public debut alongside the Concept X7 iPerformance at this week’s Frankfurt motor show. UK sales are scheduled to begin in November, with an electric version planned to arrive in 2019.

The second-generation X4, known under the codename G02, is in the final stages of development testing. Based on the same platform as the new X2, it is set to go on sale next year, with hot petrol and diesel M-Performance models planned from the outset of sales.

The current third-gen F15 model was launched in 2013 and development of its 2019 replacement is well under way. Innovations include the use of BMW’s CLAR (cluster architecture) platform, giving 48V compatibility and greater plug-in petrolelectric hybrid options.

Today’s three-year-old, second-generation X6, the F16, is due to be facelifted next year. A third-generation model, which will share both its platform and powertrains with the next X5, is expected to follow in 2020.

Previewed by the bold new Concept X7 iPerformance, the new X7 carries the codename G07. Based on BMW’s CLAR platform, it aims to provide a level of luxury and equipment on a par with that of the latest 7 Series. UK sales are set to start late next year.

Looks like a pair of silver buttocks have been glued to the front.

Nice job BMW. You have perfected the buttmobile.

Jeeps are all awful but...

...Jesus fuck, that's one seriously ugly bastard even by the usual standards of the unnecessarily overbloated rubbish clogging up the roads.

OK pressed Save too many times there, foolish me thought there'd be some kind of response when I clicked