BACK TO ALL NEWS
Currently reading: New BMW X2 shown in Detroit ahead of March arrival
UP NEXT
UK EV charging network to improve after "horrible" summer

New BMW X2 shown in Detroit ahead of March arrival

The definitive production version of the new BMW X2 compact crossover-style SUV has been revealed at the Detroit motor show ahead of a planned start of UK deliveries in March.

The X2, which made its public debut at the Los Angeles motor show at the end of November, will take BMW’s line-up of dedicated SUVs to six. A seventh, the range-topping BMW X7 previewed by the BMW Concept X7 at September’s Frankfurt motor show, is due this time next year.

As with the second-generation BMW X1, the new X2 is based on BMW’s UKL platform – the same structure beneath the BMW 2 Series Active Tourer and BMW 2 Series Gran Tourer, as well as the current range of Minis. It will also underpin next year’s third-generation BMW 1 Series hatchback. 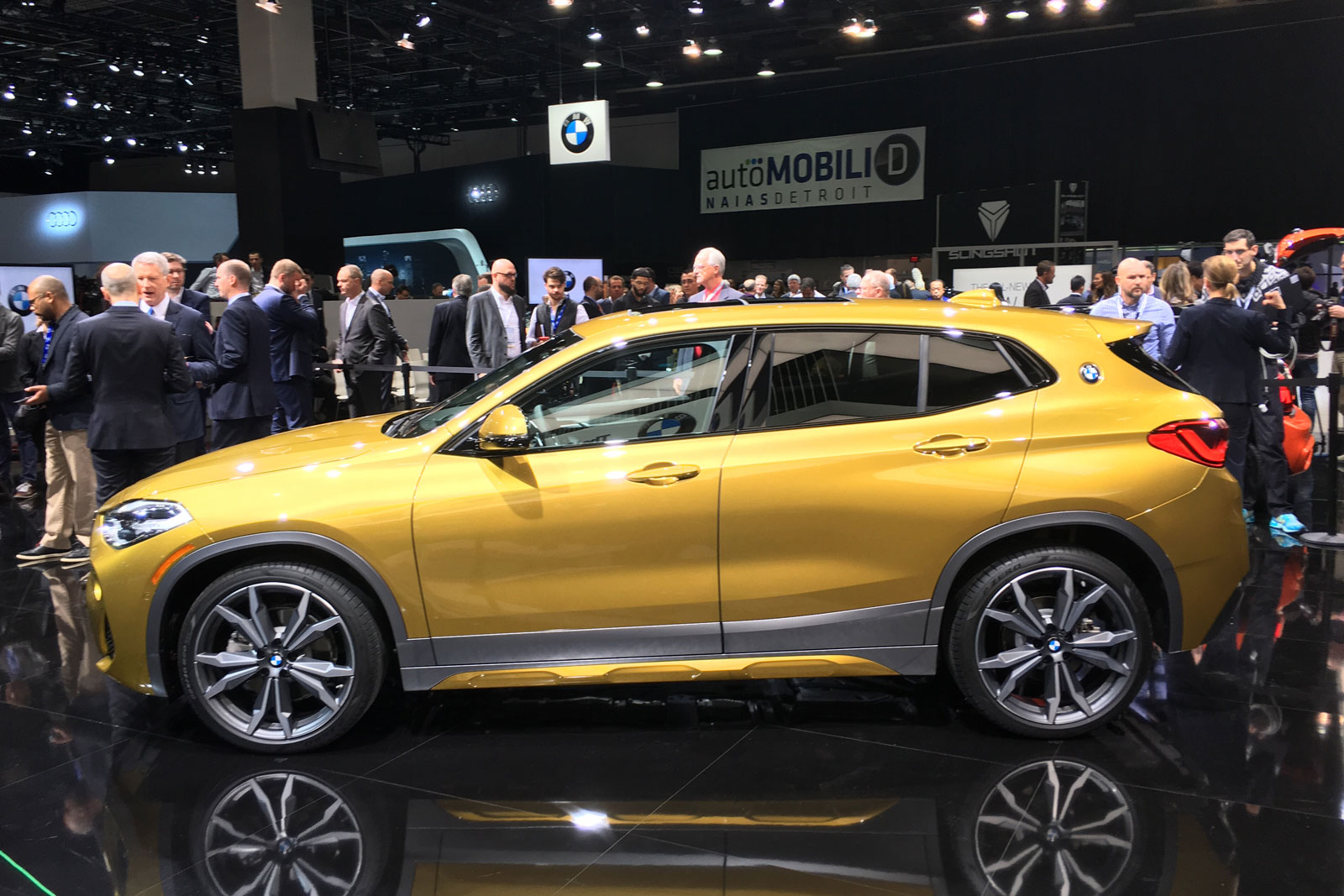 Conceived to appeal to a younger audience than BMW’s existing range of SUV models, the X2 has a unique exterior design largely unchanged from that revealed by the BMW Concept X2 at last year’s Paris motor show.

Among the new model’s defining styling elements is a fresh interpretation of the German car maker’s signature kidney grille.

The X2 also sports a short bonnet that allows the base of the windscreen to sit well forward for added interior space, familiar taut surfacing treatment along the flanks and squared-off wheel arches front and rear.

Other features include a shallow glasshouse by SUV standards, a BMW roundel within the C-pillar (recalling a detail from earlier BMW coupé models) and a heavily angled tailgate. 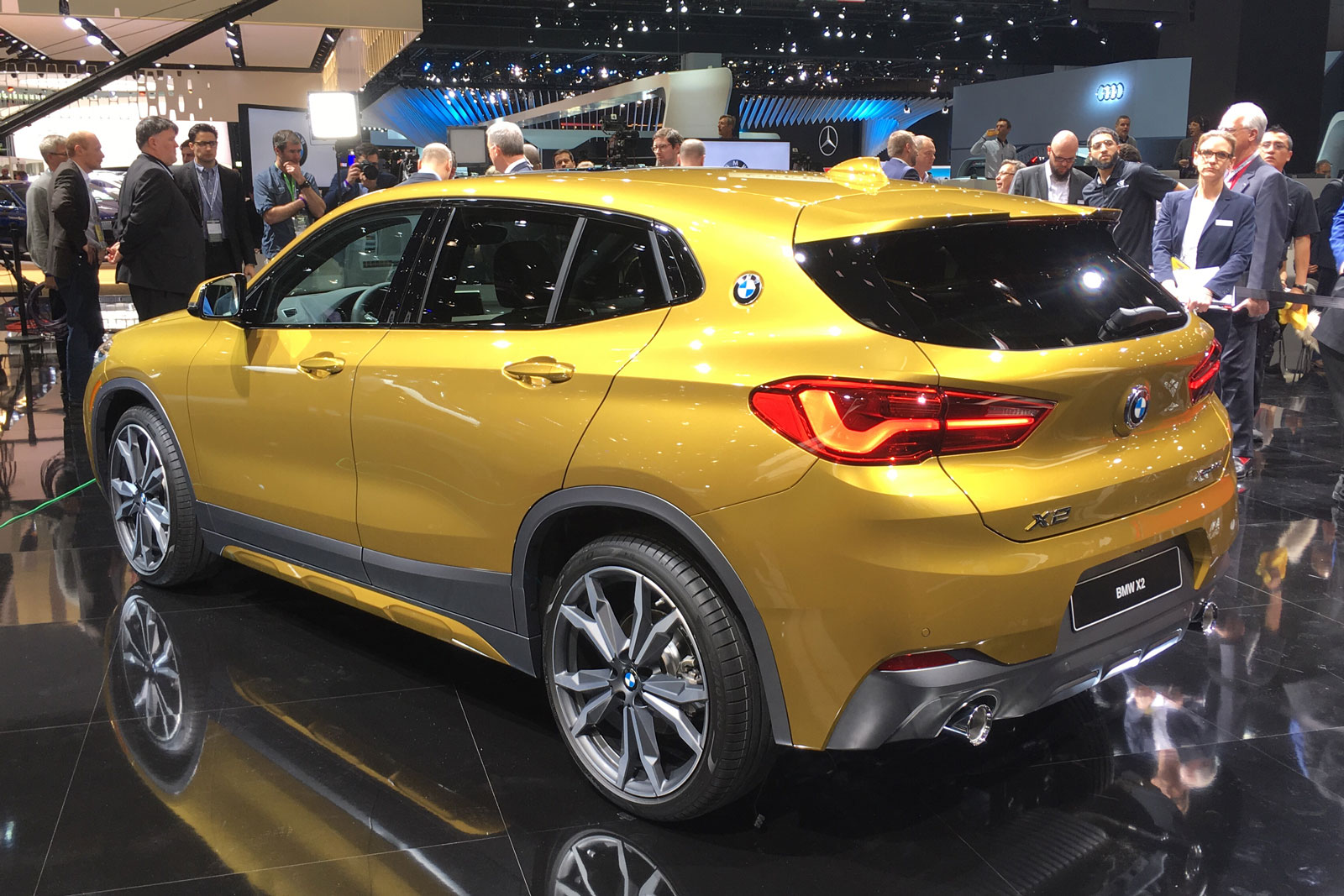 With a length, width and height of 4360mm, 1821mm and 1526mm respectively, the X2 is the same width but 49mm shorter and 69mm lower than the second-generation X1. Both cars have a 2670mm wheelbase and will be produced alongside each other at BMW’s Regensburg production facility in Germany.

The interior of the X2 shares many characteristics with the X1. Standard features include black panel instruments and a multifunction steering wheel, but buyers will have to pay extra for the optional 8.8in touch-sensitive iDrive panel and a head-up display. 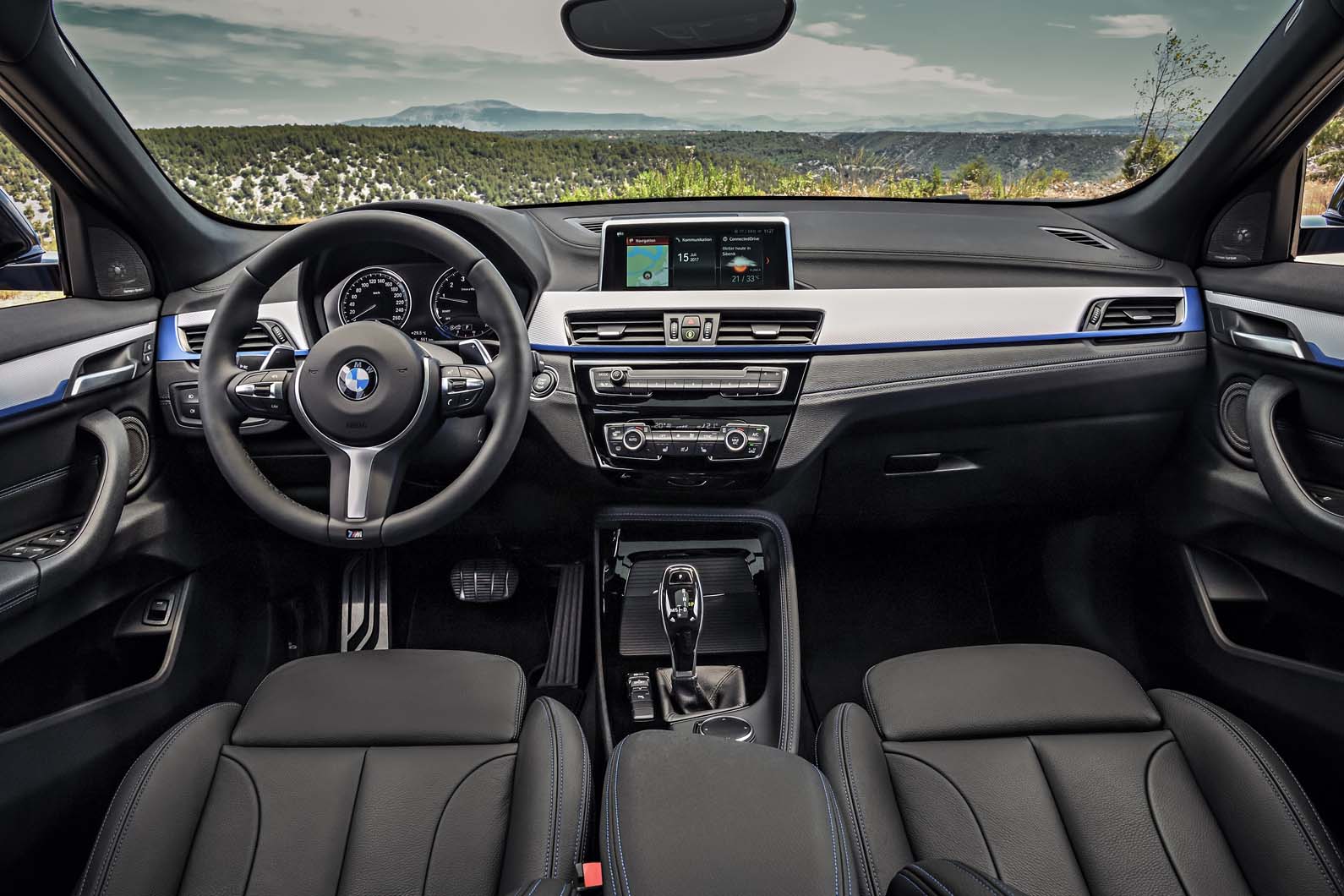 With its engines mounted transversely, the X2 is claimed to accommodate up to five adults, although the rear seat is configured in a 40/20/40 layout. Nominal boot capacity is put at 470 litres – down 35 litres from the X1's boot, which has a longer rear overhang. 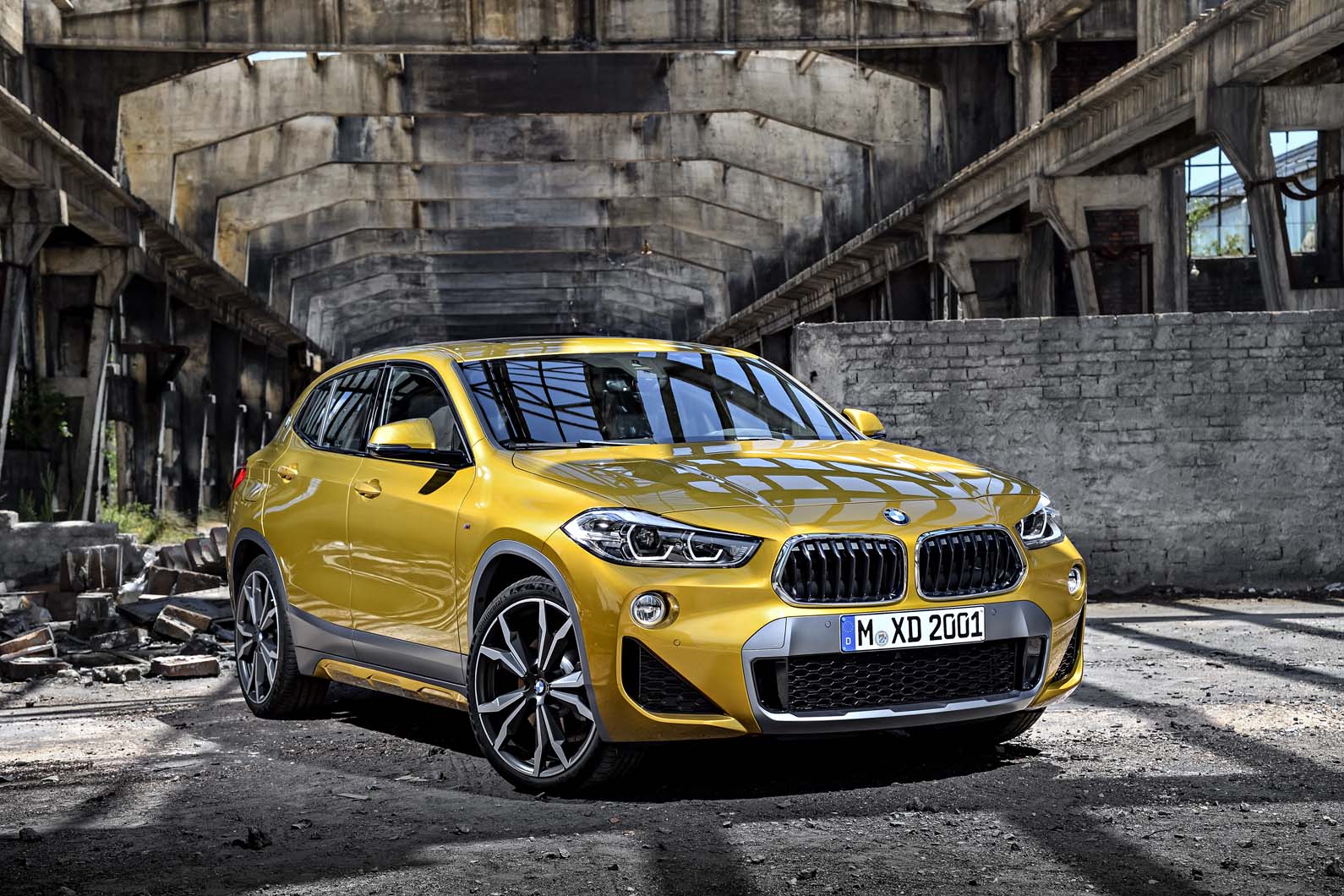 Topping the first wave of models is the X2 xDrive25d, which runs a more highly tuned 2.0 diesel producing 228bhp and 332lb ft. 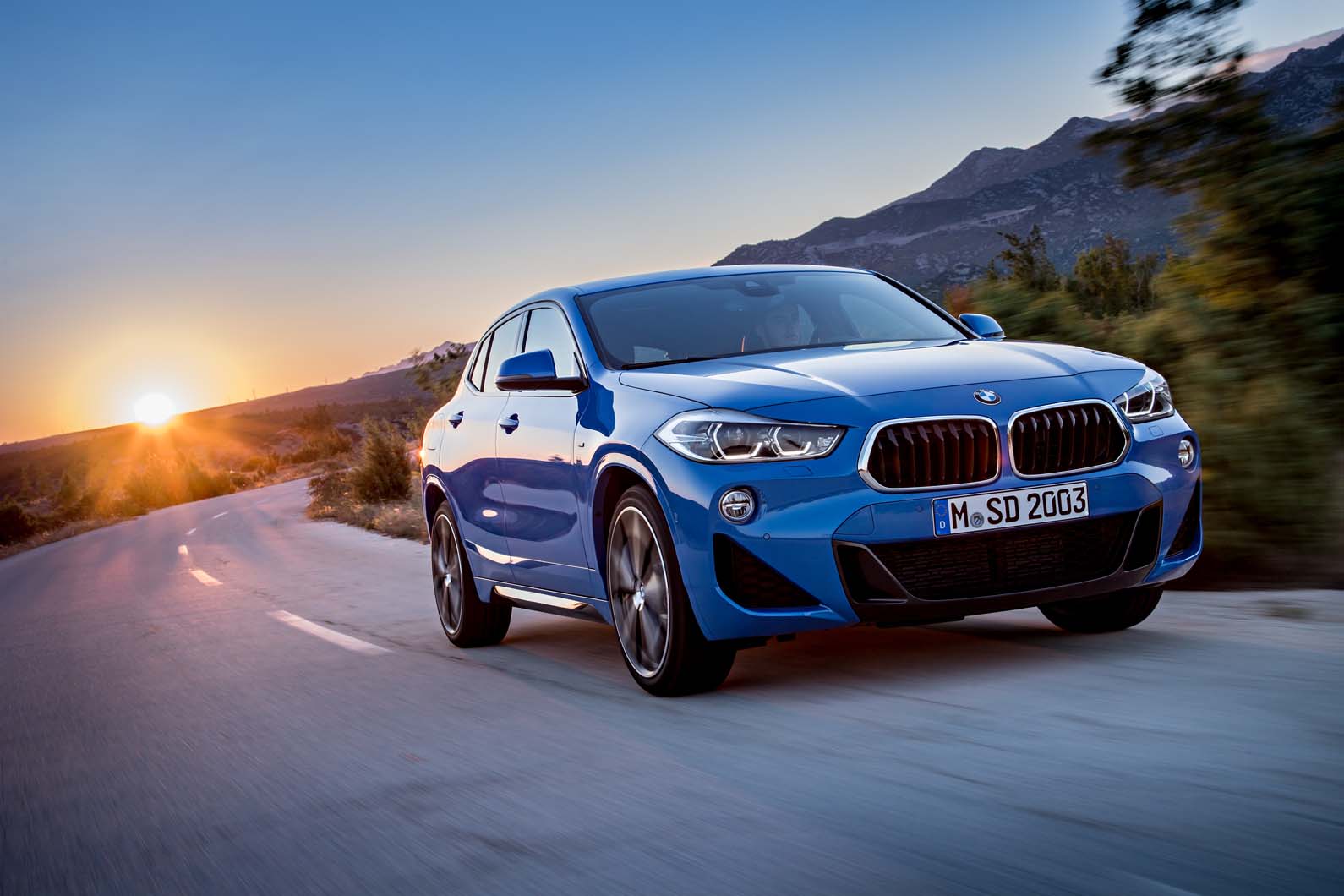 The front-wheel-drive petrol comes as standard with a seven-speed dual-clutch gearbox – a unit that is due to be available on various Mini models from early 2018. Alternatively, the four-wheel-drive diesels are equipped with an eight-speed automatic gearbox as standard.

Other models and engines are planned to bolster the X2 line-up shortly after its arrival, including the front-wheel-drive sDrive18i and sDrive18d, as well as the four-wheel-drive xDrive20i and xDrive18d.

BMW just go from disaster to disaster on the design front

In short there's way better out there for less money from Japan and Korean, let alone its German competitors.

No, more than great, it’s well proportioned, standard fair inside to typical BMW, this should be a winner.

BMW's interiors are a let

BMW's interiors are a let down these day. Sure it's functional and night quality, plus I drive works well. But if you compare the look to Mercedes or the new Range Rover Velar it feels like they are now lagging by at least 5 years. If Range Rover can tweak their infotainment system a bit I think they will have opened up a sizeable gap in interior quality, I just wish Jaguar would borrow more from them.

This car will sell well particularly to lease companies and second hand buyers will benefit from BMW style depreciation as a result. Which is why as a private buyer I'll steer well clear. It's a shame our German biased press doesn't mention this more often although I note What car point it out more frequently and is often a reason these days that JLR products win group tests, particularly when the margins between cars are becoming so fine.