BACK TO ALL NEWS
Currently reading: No electric Range Rover Evoque planned, PHEV instead
UP NEXT
Out of character cars: Nissan Nismo GT-R vs Toyota GR Yaris vs Alpine A110

An electric Range Rover Evoque won’t arrive to the line-up before 2025, as the brand focuses its efforts on hybrid technology in the mid-term.

Jaguar Land Rover UK boss Rawdon Glover said that while “there will be a market for a small to medium-sized electric SUV”, it will not arrive before the next generation of its entry-level Range Rover.

The second-generation Evoque launched earlier this year, seven years after the compact SUV was born, and thanks to a new platform, now accommodates mild hybrids as well as a plug-in hybrid.

However, Autocar understands the platform can not accommodate a fully electric drivetrain, and so new architecture would need to be implemented for a third-generation model to house such a set-up. 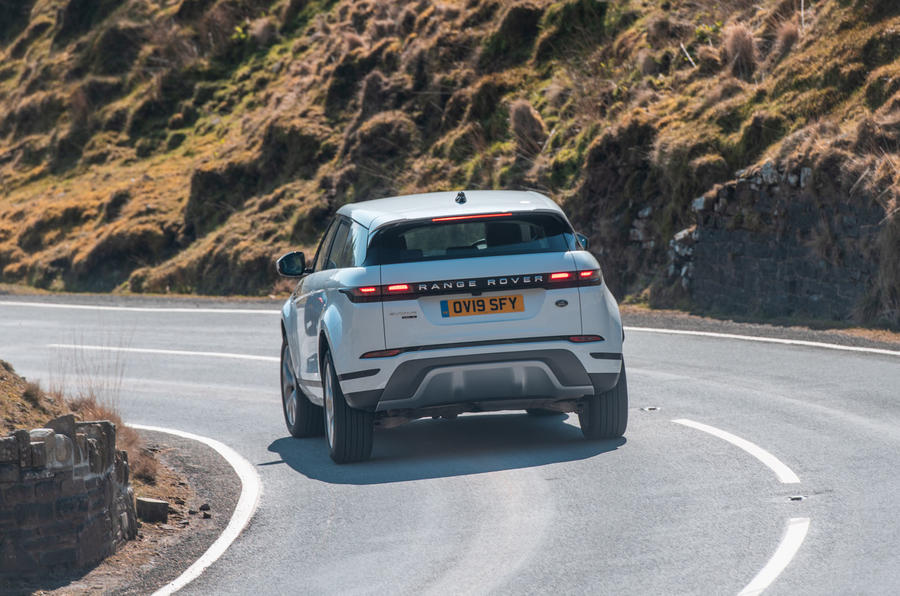 The PHEV, due in 12 months’ time, will be powered by a 197bhp three-cylinder 1.5-litre petrol engine paired with a 107bhp electric motor.

Glover described the Evoque PHEV as  “fleet game-changer” for Land Rover and predicts it will make up more than a third of UK Evoque sales when it arrives early next year.

Land Rover believes plug-in hybrid technology is a sensible middle ground for the Evoque, opposed to a fully electric variant, having seen success with the Range Rover and Range Rover Sport plug-in hybrids launched in 2017.

Within the M25, one in two of those models sold are plug-in hybrid.

Broader electric plans for Land Rover are unconfirmed, but an electric version of the flagship Range Rover is expected in under five years.

Too little too late

I need a new car in March 20 (my current PCP expires) and a PHEV Evoque would have been just the ticket. Unfortunately JLR will not have it ready by then (but Kia, Hyundai, Audi, Mercedes etc etc etc) all will have equivalent PHEV cars so my cash will go elsewhere.

Still can't get the styling...

After all these years and numerous tweaks to its styling, I still can't get my head around the shape of that car: to my eyes, it looks as if someting very heavy (an elephant?) sat on the back and squashed it down... Beauty and beholders, I suppose?

That said, last week, I saw what must be a one-off cabriolet version with a full-size folding roof! The owner (possibly) was showing off its operation at an automotive event here in Portugal and the crowd (me included) was astounded at the choreography involved! I wonder how much that conversion cost!

Still, as long as Young Vicky Becks keeps off the design, it might sell to those who like it?

That ugly stick insect has

That ugly stick insect has absolutely nothing to do with design in any shape or form including her loss making brand of crap clothes, let alone cars.

Some marketing gimmick only idiots fall for and that's it.

She's no fool though, she took the cheque for that lie.

I think what some people are fogeting here is that an EV and any car that still has some sort of combustion engine that isn't just a generator to charge batteries, cannot easily share the same basic platform as they are completely different.

All the EV pltforms appear to house the batteries as part of the floor between the wheels, which is great for EV's as it give a low centre of gravity. However, would be hopeless for ICE vehicles to share, as there's no obvious place for all the exhaust and emmisions stuff... PHEV's need far less battery space that can be slotted in around the exhaust architecture, albeit not as low down as a full EV architecture. So I'm not sure any company can use one platform for an ICE/PHEV/EV of the same model. If VW make an electric Golf alongside ICE/PHEV version, I bet it'll be a different platform underneath. However as they spawn many bedge engineered models from their platforms, this may just be do-able with care. JLR have no-where near as many models to get this working, else you could fit the i-Pace platform under an e-Pace... and then under an Evoque, but they would be two platforms with similar bodies. If you tried to share one platform you would presumably lose the packaging benefits an EV can bring too...

So I'm not sure any company can use one platform for an ICE/PHEV/EV of the same model.