Since the first-generation Range Rover entered production back in 1970, the nameplate has come to signify a vehicle synonymous with luxury and refinement; so much so that today it wouldn’t be unreasonable to label the big SUV as the benchmark against which all other high-end cars are measured. Well, all cars this side of a Rolls-Royce Phantom or Bentley Mulsanne, perhaps.

As such, if you consider the market position Range Rover now occupies - and the associated connotations - Jaguar Land Rover’s decision to introduce a plug-in hybrid model is backed by some pretty solid logic, and that’s not necessarily referring to the environmental benefits that electrified powertrains are claimed to bring about.

You see, as important as a coveted badge, plush interior and classy, stately styling may be in this segment, there’s one thing that’s equally if not more important than all of these traits: the capacity for silent, refined motoring. And let’s be honest, if it’s silence you want, an electrified powertrain is a great way to go about getting it.

Admittedly, the powertrain fitted to this latest Range Rover - model name P400e - isn’t purely electric. It combines Jaguar Land Rover’s 2.0-litre, four-cylinder Ingenium petrol engine (found in everything from the Jaguar F-Type to the Land Rover Discovery) with an 85kW electric motor, which is in turn powered by a 13.1kWh battery. So while an internal combustion engine is present, the 2509kg P400e still has the ability to travel as far as 31 miles on electricity alone, at speeds of up to 85mph.

While that doesn’t sound like a great deal of range in the real world, when you think about where cars such as a Range Rover are increasingly being bought and used - in busy cities - that 31 miles is actually pretty decent. Provided you had reliable access to a charge point at home and work, it’s perfectly reasonable to assume that you could get away with performing the vast majority of your journeys on electricity alone.

Now, the idea of buying a Range Rover - or any large 4x4 for that matter - only for it to be used within the confines of the urban sprawl is a bit of perplexing one, but the fact of the matter is that it happens. A lot. And considering that it’s rather unlikely this attitude will change any time soon, that manufacturers such as Jaguar Land Rover are beginning to roll 4x4s that have the ability to produce zero tailpipe emissions off their production lines will at least go some way to reducing the negative public perception that SUVs are, in fact, seriously bad for the environment. After all, thanks to its petrol-electric hybrid powertrain, the Range Rover P400e emits just 64g/km of CO2 on the combined cycle - and that’s not to be sniffed at. 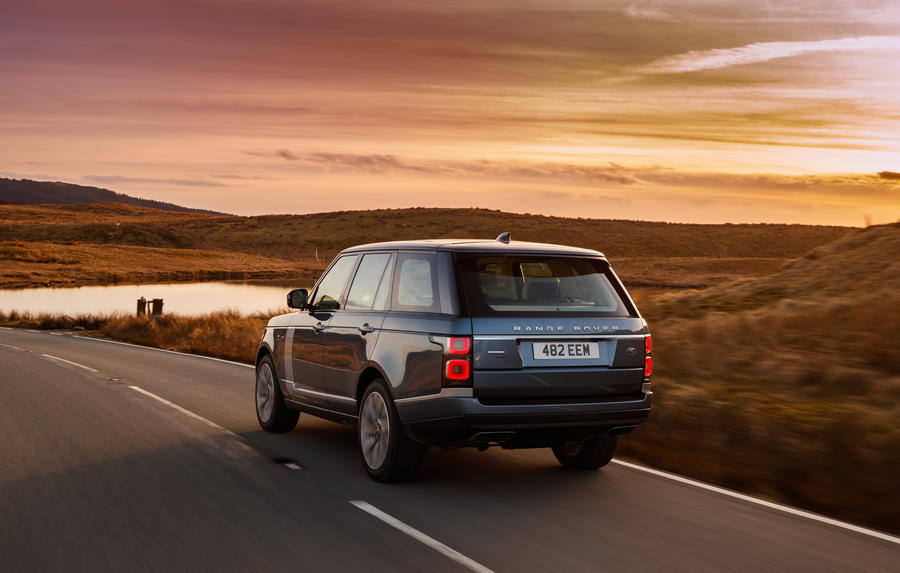 The takeaway here is that an electric drive mode, accessed with the simple press of a button on the centre console, fits the Range Rover’s character like a glove.

Our test route involved travelling through many a Cotswold village, and the ability to waft on through in massive comfort and in total silence - save for the smallest amount of road roar from the large 21in alloys - never got tiresome. The electric motor’s instantly available torque means there’s no hanging about when pulling away from the lights, while air suspension irons out imperfections in the road’s surface to give a low-speed ride that’s approaching sublime.

Couple all of that with the fact the Range Rover is easily placeable on the road thanks to its excellent forward and rear visibility and you’ve got yourself a seriously impressive vehicle for trundling around town in. Not bad when you remember that even the short wheelbase version is five metres long and 2.22 metres wide.

Put your foot down as you move out of town and that theme of refinement remains largely intact. The transition between electric and petrol power is for the most part seamless, and while the four-cylinder Ingenium engine might have felt out of its depth were it the sole source of power in a car as large and heavy as this, coupled with the electric motor there’s no shortage of poke. Combined, the two powerplants make for a total output of 398bhp and 472lb ft of torque, which translates to a claimed 0-60mph time of 6.4sec, while flat out the Range Rover will hit 137mph. To put that in perspective, Land Rover says the P400e is the second-quickest Range Rover after the petrol V8 model.

Under hard acceleration, the four-cylinder engine doesn’t sound as smooth or refined - not to mention as aurally pleasing - as the larger six- and eight-cylinder petrol and diesel powerplants, but it’s far from being coarse or unpleasant. Settle down to a cruise and engine noise fades away into the background.

On the faster, undulating back roads that made up the vast majority of our test route, the Range Rover’s air springs lend it a rather floaty, spongy ride, while faster corners give way to a large amount of body roll. Combined with a slower steering rack that’s obviously been set up with comfortable, laid-back motoring in mind, it leaves you with the sense that if you could actually see the car’s response to being told to drive with any enthusiasm, you’d be met with something resembling a reluctant eye-roll. It’s not that this Range Rover can’t be hustled down a challenging road, it’s just that such behaviour isn’t particularly becoming of a big, comfortable, luxury SUV - and that’s just fine.

As for the cabin, it’s all much as it was before. This means plenty of leather and wood panelling, masses of head and leg room in the back and generous adjustability in the seats and steering column. The most notable change here is the addition of the new dual-screen infotainment system first seen on the smaller Velar. While it looks great and is intuitive enough to use, it’s not the most responsive or fluid touchscreen we’ve come across, though that really is a small gripe in such a materially rich cabin. 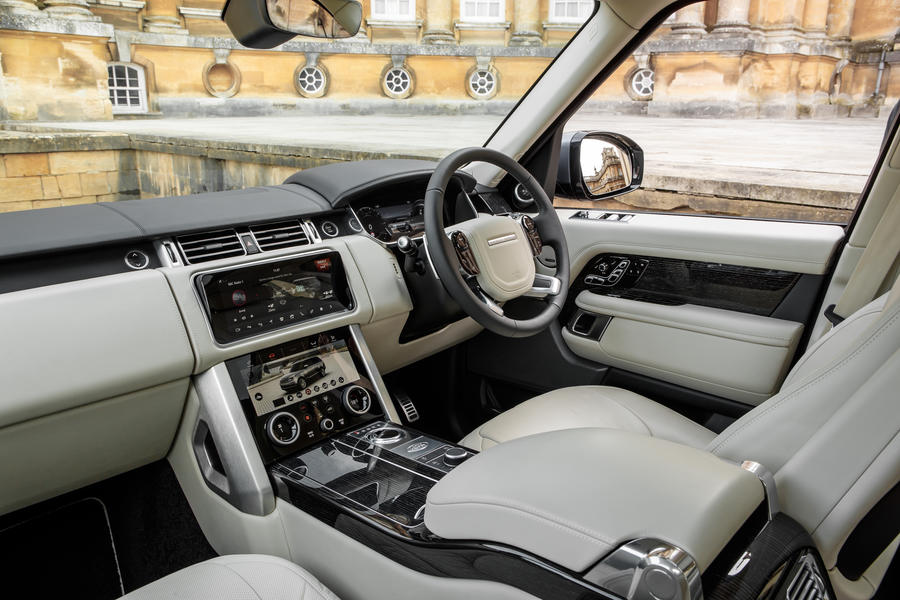 It would seem, then, that Jaguar Land Rover has created quite a compelling package with the new Range Rover P400e PHEV. Here is a luxurious, comfortable, handsome and refined SUV that also happens to be economical at the same time.

Only, that last part isn’t quite accurate. Although the P400e boasts a claimed economy figure of 101mpg, in reality that was always going to be a bit of a stretch. Limit yourself to driving short distances on all-electric mode, and yes, it’ll be cheap to run. Embark on longer, more demanding trips similar to that of our test route, though, and you’ll find yourself paying a heavy price at the pumps. We managed to average just 23mpg during our time with the car.

Interestingly, then, despite all of its hugely capable off-road technology, this is a Range Rover that’s most at home within the city limits, being driven for short periods of time on electricity alone. That might seem to go against the reputation that Land Rover was built on, but if you’re happy with that, you’re unlikely to be disappointed with the P400e. 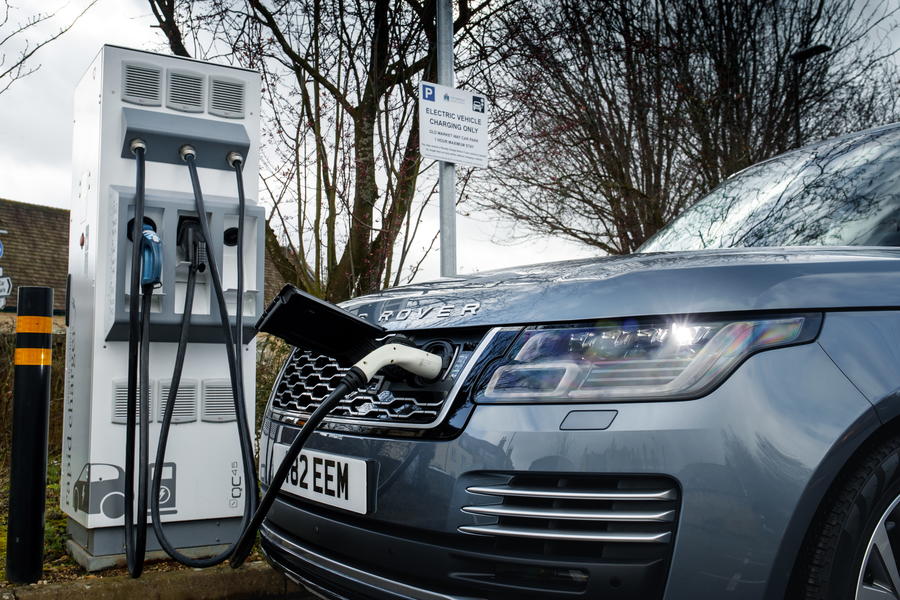 produces 178g/km CO2 in a Velar P300, but apparently it only produces 64g/km in a significantly heavier full fat RangeRover.  Now tell me again its not a tax fiddle.

In a similar vein to the BMW X6 - what's the point?

Chintz for posh chavs trying to cheat the system.

Yeah i'll happily pay £105k or whatever the lease cost may be for a unbelievably rubbish 4 cyl behemoth with a rediculously heavy battery...

Christ Autocar - COME ON! Stop being such utter noobs and properly review these cars. This is yet another pile of doo doo and you know it. I cannot believe you are so willing to let your century old reputation run away from you like this....

Dieslers are missing the point...

What this vehicle is, is a way of people with lots of money (and have gotten rid of their pariah diesels) to still being able to drive around London and other inner cities in a big wasteful vehicle while the motoring sheep in the "noisy old dirty diesels" "get stiffed" by the local councils...brilliant plan for the wealthy and that's why I still drive a 6cyl 2001 car only thing is I pay through the nose beacuase I know I will never be able to "keep up with events" like the people who can afford this sort of vehicle can.