BACK TO ALL NEWS
Currently reading: Max Reisböck - the father of the BMW 3 Series Touring
UP NEXT
How the Bugatti Chiron became the first 300mph road car

Max Reisböck - the father of the BMW 3 Series Touring

The E30 3 Series wasn’t roomy enough for BMW employee Max Reisböck, so he made his own estate version, inadvertently creating a hit for the firm
Share
Open gallery
Close
Share story

Big companies are fond of saying that  they are only as good as their employees, but it’s rare that one man can make as  big a difference as Max Reisböck did at BMW in the mid-1980s.

This, though, is  a story of one man’s endeavour swaying both the path of a corporate giant and the automotive landscape.

Launched in 1982, the second-generation, E30 3 Series was always destined to adopt more bodystyles than its predecessor, but there were no plans for an estate to join the line-up. Quite simply, estates – especially compact ones – weren’t considered to be either premium or in demand.

No matter. Reisböck, a BMW prototype engineer in Munich by trade, had a growing problem that he needed to address. Back in 1984, he was married with two young children and foresaw a difficult future when it came to taking the family and their assorted bikes, trikes and baggage on a drive.

“My motivation was to build a car with a bigger boot, pure and simple,” he says. “There was no Touring, and other vehicles were too small. There was a four-door 3 Series, so in my head the project looked pretty simple. I just needed to spend some time and money and start from the C-pillars.”

His solution was to buy a well-used 323i saloon, move it into a friend’s workshop and set about it with only his imagination to hold him back. In fact, Reisböck didn’t even bother drawing up blueprints – and it was all done in his own time, with his own tools and with no factory involvement.

“There were no notes – just what was in my head,” he says, smiling. “Before I bought the car, I walked around for four or five months playing with what was possible in my head, and then I had to adapt and adjust those plans as I went along. I had an agreed budget with my wife – 30,000DM [about £7000 today] – and so I knew I could not create anything new. I had to use what was available.”

The work took about six months, and by the end of the build, Reisböck had moved the C-pillars back to the corners of the car and taken pre-cast bodywork to fabricate the additional length of the roof panel and new rear door frames. The rear side windows were trimmed from Plexiglas and the car was given a fresh coat of paint. The rear windscreen, though, was more of an issue.

“It was law that a rear windscreen had to be certified, but I couldn’t find anything that was the right size or shape,” says Reisböck. “Then one day there was a big football match at the Olympic Stadium here in Munich. While everyone else went in, I went to the car park and measured all the screens. It turned out the Volkswagen Passat had exactly what I needed.”

Throughout his project, though, Reisböck knew he had a looming deadline with his bosses, because his contract explicitly forbade him from creating anything that wasn’t officially sanctioned. “I knew that I had to show them, because there would have been big trouble if I had taken it on the road without permission,” he recalls. “It was a relief when the reaction was positive, but a surprise when one board member came to see it – and then another at 7am the next day.”

They were so impressed that they commandeered the car on the spot. “I remember it so well. One of them said: ‘The good news is that it is gorgeous. The bad news is that it must never leave BMW premises again.’ I was compensated, of course – although not perhaps in the way Pininfarina might have been! – and the overwhelming feeling from my wife and I was one of pride. It was not about money.”

It was almost three years later that the production 3 Series Touring went on sale – a relatively fast development cycle back then but helped by there being a full-scale, working model.

“There were members of the design team who took a look and then started talking about changing this radii and that proportion, but the board members just said: ‘No, leave it as it is’,”  says Reisböck. “As a company, we learned so much from that project. In fact, from that moment on, my team in prototype engineering started growing fast as the value of full-scale models was understood. I retired in 2008 and I don’t think there was a BMW, Mini or Rolls-Royce that made production without my team building the first one or two examples for examination.” 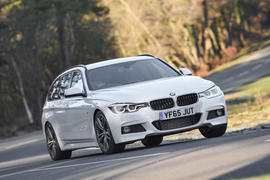 The formidable 3 Series is equally compelling in estate form but is it enough to driver buyers away from the Audi A4 Avant and the Mercedes-Benz C-Class Estate?

The production 3 Series Touring was launched in 1987 and was almost entirely faithful to Reisböck’s original, save for a few tweaks here and there, not least of which was the famous ‘beer crate’ dip in the load lip, created to aid access to  the boot and perfectly proportioned to slide a Munich beer crate through.

Laughing, Reisböck recalls that after his prototype was taken away, he went out and bought a VW minibus to take his family around in. Although he was immensely proud of the Touring, he wasn’t in a position to buy one. However, on 2 February 1994, coincidentally his birthday, the last of that generation of Touring, a 318i, came down the line and was presented as a gift to Reisböck. It was a well-earned honour, as BMW had sold more than 100,000 Tourings in the previous seven years.

Reisböck’s legacy is far beyond what he imagined his goals to be when he set about modifying that car more than 30 years ago, but he’s rightly proud that his inventive spirit has led to such success.

“Even today, my grandchildren, my nieces and nephews, whenever they see a Touring, they call it ‘my’ car, and that makes me incredibly proud,” he says. “But it is not just a story about me. I was at BMW from 1973 until 2008, and as the influence of my department grew, so did our responsibility. We were given fantastic opportunities – and the Touring really helped make that possible. I got to work on these prototype projects all my life. In reality, I was the one who was very fortunate.”

Celebrating 40 years of the BMW 3 Series

James Ruppert's guide to buying and selling a BMW 3 Series

The E30 (3 series) Touring, the E28 five series, and the E24 6 series BMW's were gorgeous. Never liked the looks of any since. If the E30, say the 323i/325i etc were launched now people would kill themselves in them without the benign chassis and electronic stability aids taken now for granted.
AHA1 26 May 2015

Didn't something similar happen with the Z3 Coupe? I believe soem rogue engineers created this in a similar fashion? The 3 series Touring 'worked'. The Z3 Coupe breadvan always looked like a lash-up.

I can't believe they waited until the last one off the line - he should have had the first!

...couldn't they have given him a six-cylinder one?

Yes, I would have thought he would have received a 325i Touring at least!
The E30 Touring was never built with the 323i engine though.
View all comments (4)