BACK TO ALL NEWS
Currently reading: Autocar confidential: Porsche Taycan progress, Mini’s Union flag lights, Skoda starts online sales & more
UP NEXT
Is the Ferrari SF90 the future of the supercar?

Porsche Taycan orders begin: Customers have begun vying for top position on the waiting list for the Porsche Taycan, even though the production version has yet to be revealed, UK boss Alexander Pollich has said. He did not confirm numbers for the car, which will be unveiled next year, but called the response “fantastic”. He added: “The history of Porsche began with an electric car in 1898 and that provides some inspiration and motivation for us. There was a big gap, but we have led with the introduction of hybrids and now we will use our heritage and learnings to offer a class-leading electric car.”

Renault Megane sales: Renault UK MD Vincent Tourette said the launch of the new Mégane RS offers the firm an opportunity to revitalise sales for standard Méganes. “The mainstream offerings fight in a crowded segment, so to have a car at the top that stands out is a big advantage,” he said. “It allows us to have visibility.”

Skoda to introduce online sales: Skoda will introduce online car sales in 2019, but sales boss Alain Favey remains unconvinced that many people want to buy cars virtually. He said: “It’s important that we offer the possibility, but many people still want personal experience in dealership.” Favey predicts that up to 10% of buyers will purchase online by 2025. 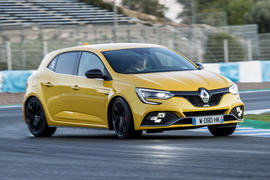 My partner drives a MINI Cooper hatch.  It's bright orange,  so we're not exactly shy, but the new Union Flag tail lights are a step too far.  They should be a (no-cost or delete) option