BACK TO ALL NEWS
Currently reading: Analysis: why Vauxhall's Luton plant has a bright future
UP NEXT
First drive: 2022 BMW XM prototype

The new van provides Luton with long-term security, gives a huge vote of confidence in the plant’s ability to adopt PSA manufacturing and quality standards and potentially opens up opportunities to build other vehicles based on the PSA EMP2 platform, which also underpins the Vauxhall Grandland X.

“This is a very, very important investment for Vauxhall,” said plant director Mike Wright. “In less than two years, the workforce has turned this plant into one of PSA’s ‘European champions’. The amount of change at the plant has just been huge.”

Such accolades are particularly crucial when you consider how under threat Vauxhall's other major plant - Ellesmere Port - has appeared to be in recent months. 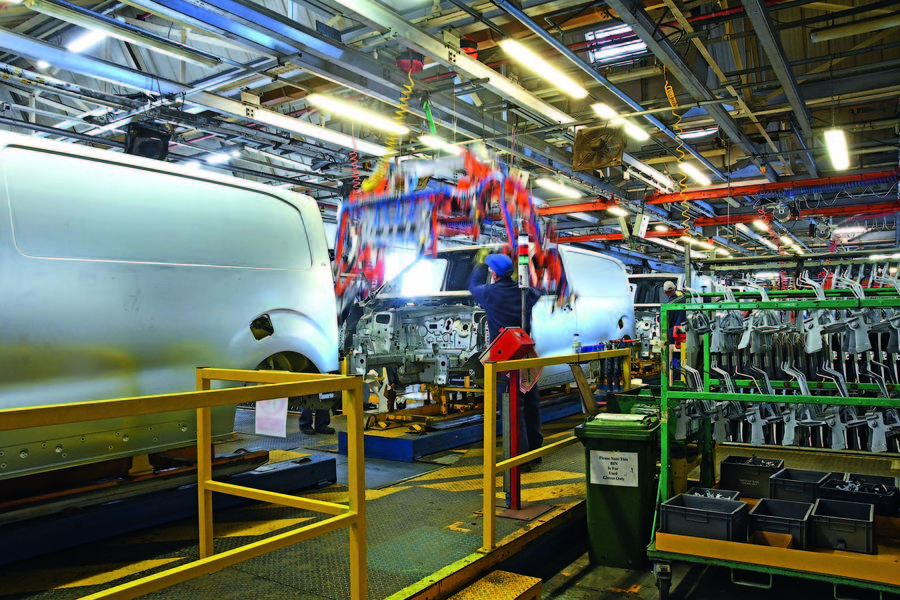 Five years ago, Wright guided Autocar through a tranche of £168m of investment that put the revamped Gen-3 Vivaro into production under GM ownership in conjunction with Opel and Renault, securing the Luton plant to 2025.

Now it’s all change after PSA bought Vauxhall/Opel in March 2017, with the Vivaro name switching to the design that serves as the Citroën Jumpy/ Dispatch, Peugeot Expert and Toyota ProAce Verso.

Like the outgoing Vivaro, it’s front-driven, but, being based on a platform that also supports SUVs, has refinements such as a multi-link rear axle, a more complex electrical system and a panoramic roof option for passenger versions.

Switching to the new platform has required significant changes to the Luton plant layout. The bulk of the investment – £65m – has gone into a new, heavily robotised body-in-white assembly plant for the new platform.

To accommodate the new line, Vauxhall cleared out a cavernous 8000-square-feet underground car park and installed 300 new robots plus assembly jigs and mechanical handling gear capable of pushing out 24 chassis platform underbodies every hour. “With a lot of blood, sweat and tears, we’ve transformed this space and installed and commissioned a whole new chassis line in just 12 months,” said Wright. 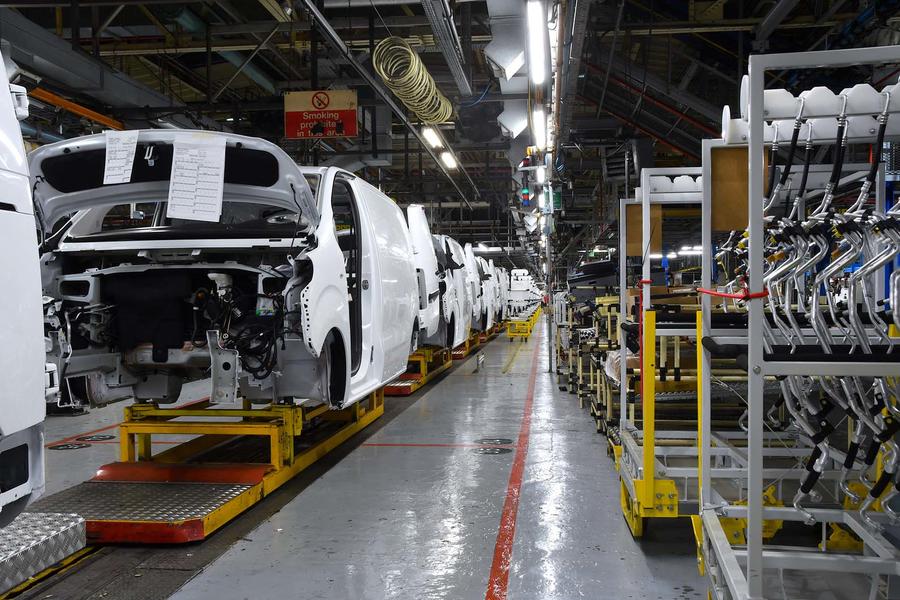 This might just be a record for a new assembly plant body shop, the urgency of PSA to speed up the turnaround providing the impetus.

Such speed of delivery is possible since the line at Vauxhall replicates the one installed at Sevel Nord, PSA’s van plant at Valenciennes in northern France.

Luton is now part of PSA’s ‘van cluster’, led by Sevel Nord, and featuring Luton, Sevel Sud in Italy and Gliwice in Poland. Quality is benchmarked against Nord and, on our visit, Citroën and Peugeot vans are in production as a quality yardstick.

Operations at Luton have been simplified by bringing in kits of pressed body panels from Sevel Nord’s suppliers, although this has diluted local content to 22% – below the 40% that it was under GM. Vauxhall hopes to raise the local content in future.

With panels coming in from France, Luton’s ageing press shop is quiet for now. The speed of the model changeover at Luton allows insufficient time to build new body dies, which typically takes two years. 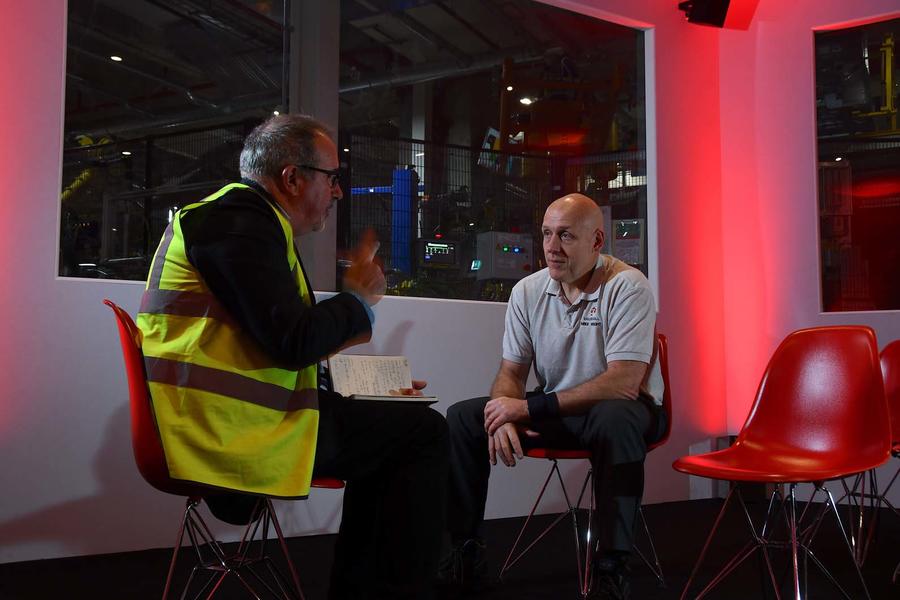 Previously, the press shop was fully occupied stamping out panels both for Luton and Renault’s Normandy van plant. Replacement work might include panels for the PSA family of vans.

As well as the new platform bodyshop, the Luton plant has reorganised its flow of parts and assembly to use two floors instead of three, dedicating the ground floor solely for assembly and final trim.

A conveyor moves platforms from the new underground welding line to the first floor where the bodies are built up, before dropping down to the ground floor.

Machines are crammed in to these new areas as PSA cracks the whip to improve workflow and shrink the production line footprint, one of its production efficiency measures.

Body assembly starts when body panels arrive in trucks from France, crated in sets of 18 and paired left/right to ensure full sets.

After being loosely ‘tabbed’ together they move into assembly, where 128 new robots are deployed on bodyside welding alone.

Sparks fly, as usual, in the body-framing welding station, which is also new, and is the centrepiece of the plant.

PSA has introduced innovations in final assembly, too, notably a new automated parts handling system dubbed the ‘supermarket’ that automatically loads components into bins to be delivered line-side by a fleet of 19 robotic, automatically guided vehicles (AGV).

This reduces line-side clutter at the 200-plus final assembly stations, essential because the new PSA van offers more build variations, requiring more parts at each station.

A spin-off from this extra complication is a slightly slower line speed and ‘Takt’ time – how long operators have to complete their assembly task. This is now 2min 10sec, 10 seconds longer than under GM ownership. As the workforce beds in, it’s possible those 10 seconds might be saved.

Bright, shiny vans are lining up at the end of Luton’s production lines and the presence of Citroën and Peugeot badges are an indication of the changes already in place.

Vauxhall is under new management, Luton has a new lease of life and Britain’s oldest operating car plant looks to have a secure future. Can the brand do the same at Ellesmere Port? That remains an open question.

psa are and have been quite happy to throw all this time and investment in to the plant, basically getting the new ones rolled out as quickly as they can, so i'd imagine that if they're happy about things, we don't need to worry too much either. The 22% thing does sound a bit lower than ideal, however, as it states clearly in the article, given the timeframe that was never really going to be any higher, and will increase.

PSA proving to be the kick up the backside Vauxhall needed

I must admit I was very skeptical when PSA took over Vauxhall from GM, but so far they seem to making a good success from it. The new Corsa is already looking leaps and bounds ahead of the current model, and the sharing of new competitive platforms and engines is bound to boost the appeal of the Vauxhall brand. Hopefully the momentum can continue!

Good article, very interesting to see how a factory can be changed from making one product to another very different one

Must be an interesting challenge for the dealers though, if existing customers have a large fleet of the Renault based Vivaro, will they buy the new Peugeot based one or just buy the Renault Trafic instead?